Hispanics are transforming the nation’s religious landscape, especially the Catholic Church, not only because of their growing numbers but also because they are practicing a distinctive form of Christianity.

Religious expressions associated with the pentecostal and charismatic movements are a key attribute of worship for Hispanics in all the major religious traditions — far more so than among non-Latinos. Moreover, the growth of the Hispanic population is leading to the emergence of Latino-oriented churches across the country.

To explore the complex nature of religion among Latinos, the Pew Hispanic Center and the Pew Forum on Religion & Public Life collaborated on a series of public opinion surveys that totaled more than 4,600 interviews, constituting one of the largest data collection efforts conducted on this subject. The study examines religious beliefs and behaviors and their association with political thinking among Latinos of all faiths. It focuses special attention on Catholics, both those who retain their identification with the church and those who convert to evangelical churches.

About a third of all Catholics in the U.S. are now Latinos, and the study projects that the Latino share will continue climbing for decades. This demographic reality, combined with the distinctive characteristics of Latino Catholicism, ensures that Latinos will bring about important changes in the nation’s largest religious institution.

Religious Affiliation of Latinos in the U.S. 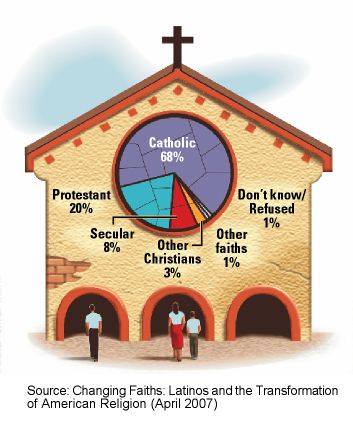 Most significantly given their numbers, more than half of Hispanic Catholics identify themselves as charismatics, compared with only an eighth of non-Hispanic Catholics. While remaining committed to the church and its traditional teachings, many of these Latino Catholics say they have witnessed or experienced occurrences typical of spirit-filled or renewalist movements, including divine healing and direct revelations from God. Even many Latino Catholics who do not identify themselves as renewalists appear deeply influenced by spirit-filled forms of Christianity.

Similarly, the renewalist movement is a powerful presence among Latino Protestants. More than half of Hispanics in this category identify with spirit-filled religion, compared with about a fifth of non-Hispanic Protestants.

The study also shows that many of those who are joining evangelical churches are Catholic converts. The desire for a more direct, personal experience of God emerges as by far the most potent motive for these conversions. Although these converts express some dissatisfaction with the lack of excitement in a typical Catholic Mass, negative views of Catholicism do not appear to be a major reason for their conversion.

The practice of religion is not only often renewalist in character, but for most Latinos across all the major religious traditions it is also distinctively ethnic. Two-thirds of Latino worshipers attend churches with Latino clergy, services in Spanish and heavily Latino congregations.

While most predominant among the foreign born and Spanish speakers, Hispanic-oriented worship is also prevalent among native-born and English-speaking Latinos. That strongly suggests that the phenomenon is not simply a product of immigration or language but that it involves a broader and more lasting form of ethnic identification.

These two defining characteristics — the prevalence of spirit-filled religious expressions and of ethnicoriented worship — combined with the rapid growth of the Hispanic population leave little doubt that a detailed understanding of religious faith among Latinos is essential to understanding the future of this population as well as the evolving nature of religion in the United States.

Pew Hispanic Center
The mission of the Pew Hispanic Center is to improve understanding of the diverse Hispanic population and to chronicle the growing impact of Latinos on the nation. The nonpartisan research organization was founded in 2001.

Pew Forum on Religion & Public Life
The Pew Forum on Religion & Public Life delivers timely, impartial information on issues at the intersection of religion and public affairs. The Forum functions as both a clearinghouse and a town hall. As a clearinghouse, it conducts independent opinion research, demographic studies and other quantitative and qualitative research on important trends in religion and public life. Through its various roundtables and briefings, it also provides a neutral venue for discussion of these important issues.

Beyond the strictly religious realm, this study suggests that the roles Latinos play in U.S. politics and public affairs are deeply influenced by the distinctive characteristics of their religious faith. Most Latinos see religion as a moral compass to guide their own political thinking, and they expect the same of their political leaders. In addition, across all major religious traditions, most Latinos view the pulpit as an appropriate place to address social and political issues.

The study also sheds new light on the role religious affiliation plays on party identification among Hispanics. Latinos who are evangelicals are twice as likely as those who are Catholics to identify with the Republican Party. Latino Catholics, on the other hand, are much more likely than Latino evangelicals to identify with the Democratic Party. These differences rival, and may even exceed, those found in the general population.

Both the Pew Hispanic Center and the Pew Forum on Religion & Public Life are projects of the Pew Research Center, a Washington-based, nonpartisan research organization that seeks to provide timely information free of any advocacy on issues, attitudes and trends that are shaping America and the world. This study is the result of a yearlong collaboration involving more than a dozen researchers drawn from the staffs of both projects with expertise in a variety of subjects and research methodologies.

The centerpiece of the study is a telephone survey of a nationally representative sample of 4,016 Hispanic adults conducted between Aug. 10 and Oct. 4, 2006. The survey included an oversample of 2,000 non- Catholics, which permits an examination of the growth of evangelical and pentecostal Christianity among Latinos, including the process of conversion, in unprecedented detail. The sampling methodology also provided for robust numbers of respondents in all the major country-of-origin segments of the Hispanic population, allowing for detailed analysis of results by this important variable.

Both the extent of renewalism and of ethnic-oriented worship were further examined in recontact interviews with 650 Catholics drawn from the sample of the first survey. The research team also examined data from a large body of surveys previously conducted by both projects, particularly the latest of the Forum’s extensive surveys of religious belief and behavior in the general population, which offer various comparisons between Hispanics and non-Hispanics on many points.

Chapter 1: Religion and Demography
More than two-thirds of Hispanics (68%) identify themselves as Roman Catholics. The next largest category, at 15%, is made up of born-again or evangelical Protestants. Nearly one-in-ten (8%) Latinos do not identify with any religion. Differences in religious identification among Latinos coincide with important differences in demographic characteristics. For example, Catholics are a more heavily immigrant population than evangelicals. Given current demographic trends, Latinos are projected to become an ever-increasing segment of the Catholic Church in the U.S.

Chapter 2: Religious Practices and Beliefs
For the great majority of Latinos, regardless of their religious tradition, God is an active force in everyday life. Most Latinos pray every day, most have a religious object in their home and most attend a religious service at least once a month. By significant majorities, Latinos who identify with a religion believe that miracles are performed today just as they were in ancient times. Amid this overall religiosity, important differences emerge among Latinos of different religious traditions and between Latinos and their non-Hispanic counterparts.

Chapter 3: The Renewalist Movement and Hispanic Christianity
Renewalist Christianity, which places special emphasis on God’s ongoing, day-to-day intervention in human affairs through the person of the Holy Spirit, is having a major impact on Hispanic Christianity. Among Latino Protestants, renewalism is more than twice as prevalent as among their non-Latino counterparts. A majority (54%) of Hispanic Catholics describe themselves as charismatic Christians, making them more than four times as likely as non-Latino Catholics to identify with renewalist Christianity. The implications of this are particularly important for the Catholic Church, given that the rapidly growing Latino flock is practicing a distinctive form of Catholicism.

By an overwhelming majority (82%), Hispanics cite the desire for a more direct, personal experience with God as the main reason for adopting a new faith. Among those who have become evangelicals, nine-in-ten (90%) say it was this spiritual search that drove their conversion. A majority of evangelical converts (61%) say the typical Catholic mass is not lively or exciting, although only about one-in-three (36%) cite that as a reason for their conversion.

Chapter 5: The Ethnic Church
The houses of worship most frequented by Latinos have distinctly ethnic characteristics. A majority of those in the congregation are Hispanic; some Latinos serve as clergy; and liturgies are available in Spanish. The growth of the Hispanic population is leading to the emergence of Latino-oriented churches in all the major religious traditions across the country. While the prevalence of Hispanic-oriented worship is higher among the foreign born, with 77% saying they attend churches with those characteristics, the phenomenon is also widespread among the native born, with 48% saying they attend ethnic churches.

Chapter 6: Religion and Politics
Two-thirds of Hispanics say that their religious beliefs are an important influence on their political thinking. More than half say churches and other houses of worship should address the social and political questions of the day. By nearly a two-to-one margin, Latinos say that there has been too little expression of religious faith by political leaders rather than too much. Churchgoing Hispanics report that their clergy often address political matters, although the extent of that practice varies considerably by issue and by religious tradition.

Chapter 7: Ideology and Policy Issues
Religious affiliation and church attendance are strongly related to political ideology and views on a variety of social and public policy issues among Latinos. Even after controlling for language ability, nationality, generation and education, for instance, Latino evangelicals are still significantly more conservative than Catholics on social issues, foreign policy issues and even in their attitudes toward the plight of the poor. Catholics, in turn, are somewhat more conservative than seculars when it comes to gay marriage, government-guaranteed health care and increases in government services.

Frequency of church attendance tends to be correlated with more conservative views on social issues after controlling for a variety of demographic factors.

Chapter 8: Party Identification and Ideology
Latino evangelicals are twice as likely as Latino Catholics to be Republicans. That is a far greater difference than exists among whites. Moreover, Hispanic conservatives who are Catholic favor the Democrats, while white conservatives consider themselves Republican regardless of religious tradition.

The Democratic Party holds a nearly three-to-one advantage among Latino Catholics who are eligible to vote (48% vs. 17% for Republicans). Because the Latino electorate is overwhelmingly Catholic (63%), Catholics represent the core of Democratic support among Latinos. Indeed, 70% of all Latino eligible voters who identify as Democrats are Catholics. Party identification among Latino evangelicals is more narrowly divided and appears to slightly favor the Republican Party. Among Hispanic eligible voters who are evangelicals, 37% say they consider themselves Republicans and 32% say they are Democrats.

Next: Glossary Next Page → ← Prev Page