Chapter 1: The Religious Composition of the United States

The Landscape Survey details the great diversity of religious affiliation in the U.S. at the beginning of the 21st century. The adult population can be usefully grouped into more than a dozen major religious traditions that, in turn, can be divided into hundreds of distinct religious groups. Overall, nearly eight-in-ten (78.4%) adults report belonging to various forms of Christianity, about 5% belong to other faiths and almost one-in-six (16.1%) are not affiliated with any particular religion.

Other major faith traditions in the U.S. include Jews (1.7% of the adult population), Buddhists (0.7%), Muslims (0.6%), Hindus (0.4%) and members of other world religions, including Baha’is, Zoroastrians and others (which together account for less than 0.3% of the population). Members of a variety of other faiths, including Unitarians, New Age groups and Native American religions, combine to make up an additional 1.2% of the population.

Finally, individuals who are not affiliated with any particular religion make up about one-sixth (16.1%) of the adult population. They thus comprise the fourth largest “religious” tradition in the United States, nearly approximating the number of members of mainline Protestant churches.

The following table summarizes the religious affiliation of U.S. adults and provides a sense of the remarkable diversity that characterizes the U.S. religious landscape. 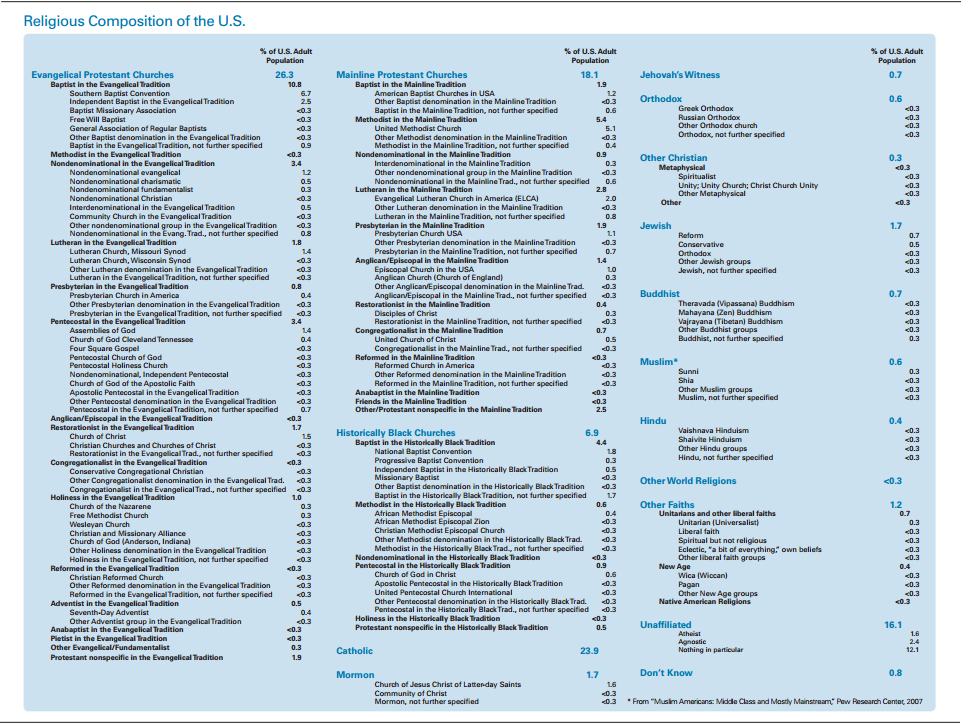 Protestants account for roughly half (51.3%) of the adult population and nearly two-in-three (65%) Christians in the United States. But American Protestantism is very diverse. It encompasses more than a dozen major denominational families, such as Baptists, Methodists, Lutherans and Pentecostals, all with unique beliefs, practices and histories. These denominational families, in turn, are composed of a host of different denominations, such as the Southern Baptist Convention, the American Baptist Churches in the USA and the National Baptist Convention.

For instance, churches within the evangelical Protestant tradition share certain religious beliefs (such as the conviction that personal acceptance of Jesus Christ is the only way to salvation), practices (such as an emphasis on bringing other people to the faith) and origins (including separatist movements against established religious institutions). In contrast, churches in the mainline Protestant tradition share other doctrines (such as a less exclusionary view of salvation), practices (such as a strong emphasis on social reform) and origins (such as long-established religious institutions). Meanwhile, churches in the historically black Protestant tradition have been uniquely shaped by the experiences of slavery and segregation, which put their religious beliefs and practices in a special context.

Second, non-black respondents who gave vague denominational affiliations and who described themselves as a “born-again or evangelical Christian” were coded as members of the evangelical tradition; otherwise, they were coded as members of the mainline tradition. (For more details on the analytical processes used to sort respondents with vague denominational affiliations into Protestant traditions, see Appendix 2 (PDF).)

The Composition of American Protestantism

The largest of the Protestant families in the U.S. is the Baptist family, which accounts for one third of all Protestants and close to one-fifth (17.2%) of the overall adult population. Baptists are concentrated within the evangelical tradition, making up a plurality (41%) of this tradition. Baptists also account for nearly two-thirds (64%) of members of historically black churches. However, they constitute a much smaller share (10%) of mainline Protestantism.

Methodists represent the second largest Protestant family, accounting for more than one-in-ten of all Protestants (12.1%) and 6.2% of the overall adult population. Methodists are particularly well represented within mainline Protestantism, accounting for nearly one-third (30%) of all members of mainline churches, as well as within the historically black church tradition, where they account for nearly one-in-ten (9%) of all members. Most Methodists within mainline Protestantism are members of the United Methodist Church, while most Methodists in the historically black church tradition are affiliated with the African Methodist Episcopal denomination. Methodists represent a very small share (1%) of the evangelical Protestant tradition. 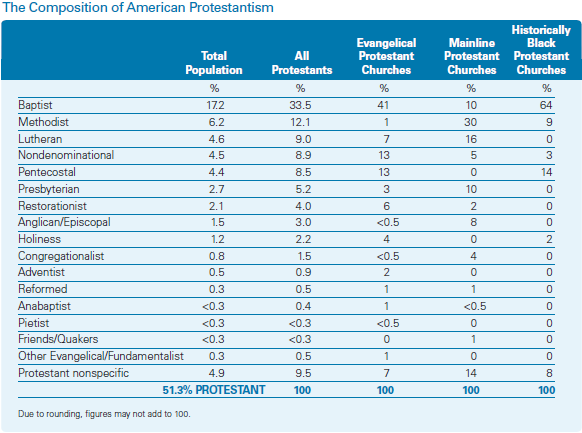 Like nondenominational Protestants, the Lutheran and Pentecostal1 families each account for slightly less than 5% of the overall adult population (4.6% and 4.4%, respectively). Lutherans are highly represented within mainline Protestantism and less so within evangelicalism. More than one-in-ten members of evangelical churches and historically black churches are affiliated with the Pentecostal family (13% and 14%, respectively). 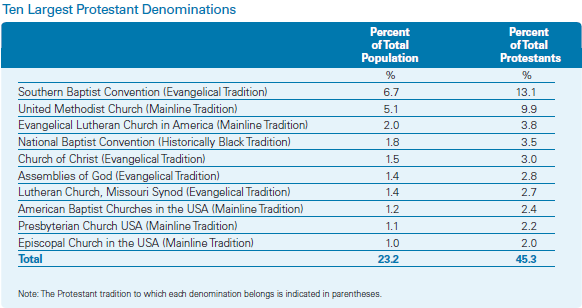 Finally, Protestants who do not identify with any particular family, including those who describe themselves as “just a Protestant,” account for nearly 10% of all Protestants and roughly 5% of the overall adult population. 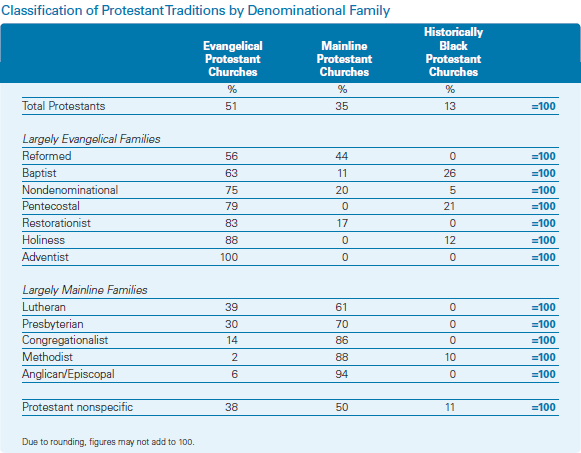 The Decline of American Protestantism

Although the questions on religious affiliation in the Landscape Survey are not directly comparable to those in previous surveys, there is a rich body of research that looks at the question of change over time in the religious affiliation of the U.S. population. Although scholars contributing to this research have adopted a variety of definitions of major religious groups and pursued various approaches to measuring change over time, this research arrives at a similar conclusion: The proportion of the population that is Protestant has declined markedly in recent decades while the proportion of the population that is not affiliated with any particular religion has increased significantly. 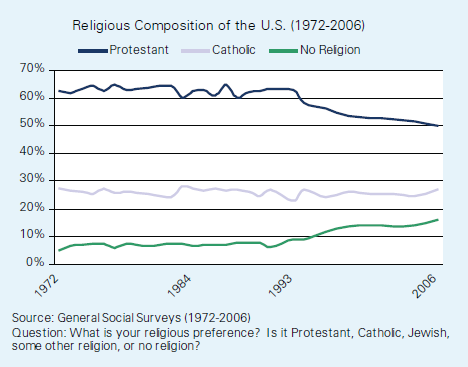 This trend is clearly apparent, for example, in the findings of the General Social Surveys (GSS), conducted between 1972 and 2006 by the National Opinion Research Center at the University of Chicago. Over this period, the GSS have asked the same basic religious identification question each time the survey was conducted: “What is your religious preference? Is it Protestant, Catholic, Jewish, some other religion, or no religion?” Through the 1970s and 1980s, between 60% and 65% of respondents described themselves as Protestant. In the early 1990s, however, the proportion of adults identifying as Protestant began a steady decline. By 2006, the GSS registered Protestant affiliation at 50%, an estimate that is very similar to the one produced by the Landscape Survey.

The decline in the Protestant share of the U.S. population raises another important question, namely, whether the decline in Protestantism has occurred across all three traditions or has been concentrated in one or another of the traditions. What scholars who have analyzed the GSS data have found is that the proportion of the population identifying with the large mainline Protestant denominations has declined significantly in recent decades, while the proportion of Protestants identifying with the large evangelical denominations has increased.

Unlike Protestants, who have seen their ranks dwindle as a share of the population, the GSS findings suggest that the proportion of the adult population that identifies itself as Catholic has held fairly steady, at around 25%, in recent decades. But the Landscape Survey makes clear that this apparent stability obscures a great deal of change in the makeup of Catholicism in the U.S.

An analysis of changes in religious affiliation (discussed in detail in Chapter 2) finds that Catholicism has lost more people to other religions or to no religion at all than any other single religious group. These losses, however, have been offset partly by people who have switched their affiliation to Catholicism, but mostly by the significant number of Catholics who have immigrated to the U.S. in recent decades, primarily from Latin America. The Landscape Survey finds, for example, that nearly half of all immigrants (46%) are Catholic, compared with 21% of the native-born population. (Differences in the native-born and foreign-born Catholic population are discussed further in Chapter 3.) 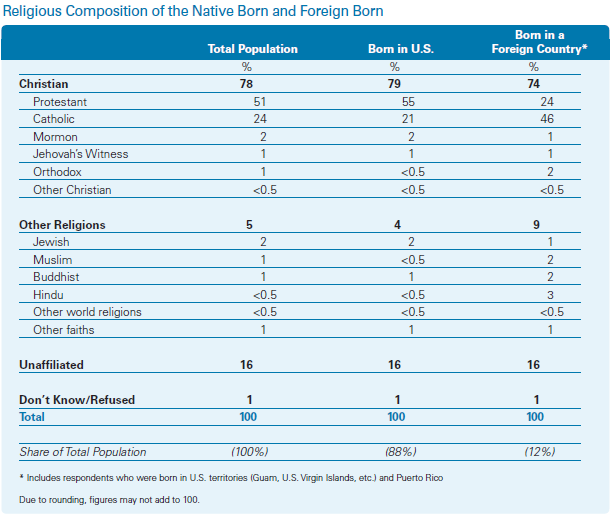 According to the Landscape Survey, more than one-in-six American adults (16.1%) are not currently affiliated with any particular religious group. Through the 1980s, the GSS consistently found that between 5% and 8% of the public was not affiliated with any particular religion. By 2006, however, the GSS showed that 16% of U.S. adults reported no religious affiliation. 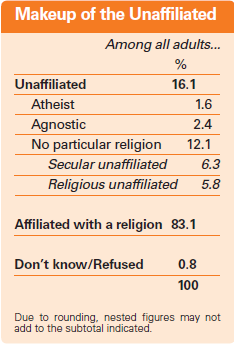 This latter group consists of two smaller, fairly distinct subgroups. About half of people who describe their religion as nothing in particular (6.3% of the overall adult population) say that religion is not too important or not at all important in their lives. Thus, they can be thought of as being mostly secular in their orientation. But the other half of this group (5.8% of adults) says that religion is somewhat important or very important in their lives, despite their lack of affiliation with any particular religious group. Thus, this group can be thought of as the “religious unaffiliated.” (Differences in the demographic characteristics of the religious unaffiliated and their more secular counterparts are discussed in more detail in Chapter 3.)