More than one-quarter of American adults (28%) have left the faith in which they were raised in favor of another religion – or no religion at all. If change in affiliation from one type of Protestantism to another is included, roughly 44% of adults have either switched religious affiliation, moved from being unaffiliated with any religion to being affiliated with a particular faith, or dropped any connection to a specific religious tradition altogether.

While those Americans who are unaffiliated with any particular religion have seen the greatest growth in numbers as a result of changes in affiliation, Catholicism has experienced the greatest net losses as a result of affiliation changes. While nearly one-in-three Americans (31%) were raised in the Catholic faith, today fewer than one-in-four (24%) describe themselves as Catholic. These losses would have been even more pronounced were it not for the offsetting impact of immigration. The Landscape Survey finds that among the foreign-born adult population, Catholics outnumber Protestants by nearly a two-to-one margin (46% Catholic vs. 24% Protestant); among nativeborn Americans, on the other hand, Protestants outnumber Catholics by an even larger margin (55% Protestant vs. 21% Catholic). Immigrants are also disproportionately represented among several world religions in the U.S., including Islam, Hinduism and Buddhism. 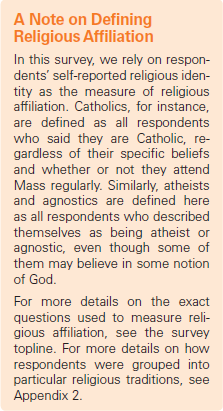 The survey finds that constant movement characterizes the American religious marketplace, as every major religious group is simultaneously gaining and losing adherents. Those that are growing as a result of religious change are simply gaining new members at a faster rate than they are losing members. Conversely, those that are declining in number because of religious change simply are not attracting enough new members to offset the number of adherents who are leaving those particular faiths.

Another example of the dynamism of the American religious scene is the experience of the Catholic Church. Other surveys – such as the General Social Surveys, conducted by the National Opinion Research Center at the University of Chicago since 1972 – find that the Catholic share of the U.S. adult population has held fairly steady in recent decades, at around 25%. What this apparent stability obscures, however, is the large number of people who have left the Catholic Church. Approximately one-third of the survey respondents who say they were raised Catholic no longer describe themselves as Catholic. This means that roughly 10% of all Americans are former Catholics. These losses, however, have been partly offset by the number of people who have changed their affiliation to Catholicism (2.6% of the adult population) but more importantly by the disproportionately high number of Catholics among immigrants to the U.S. The result is that the overall percentage of the population that identifies as Catholic has remained fairly stable.

In addition to detailing the current religious makeup of the U.S. and describing the dynamic changes in religious affiliation, the findings from the Landscape Survey also provide important clues about the future direction of religious affiliation in the U.S. By detailing the age distribution of different religious groups, for instance, the survey findings show that more than six-in-ten Americans age 70 and older (62%) are Protestant but that this number is only about four-in-ten (43%) among Americans ages 18-29. Conversely, young adults ages 18-29 are much more likely than those age 70 and older to say that they are not affiliated with any particular religion (25% vs. 8%). If these generational patterns persist, recent declines in the number of Protestants and growth in the size of the unaffiliated population may continue.

Finally, the Landscape Survey documents how immigration is adding even more diversity to the American religious quilt. For example, Muslims, roughly two-thirds of whom are immigrants, now account for roughly 0.6% of the U.S. adult population; and Hindus, more than eight-in-ten of whom are foreign born, now account for approximately 0.4% of the population.

Other highlights in the report include:

These are some of the key findings of the Pew Forum’s U.S. Religious Landscape Survey, which draws primarily on a new nationwide survey conducted from May 8 to Aug. 13, 2007, among a representative sample of more than 35,000 adults in the U.S., with additional oversamples of Eastern Orthodox Christians, Buddhists and Hindus. The study also takes advantage of the 2007 survey of American Muslims (“Muslim Americans: Middle Class and Mostly Mainstream”), which was conducted by the Forum in partnership with its sister projects, the Pew Research Center for the People & the Press, the Pew Hispanic Center and the Pew Global Attitudes Project. In total, these surveys included interviews with more than 36,000 Americans.

Next: Introduction Next Page → ← Prev Page