As Pope Benedict XVI prepares to introduce himself to the U.S., a new Pew Forum survey shows that many Americans know very little about him. Pew Forum Director Luis Lugo and Associate Director Mark O’Keefe discuss the survey results in the context of previous findings and compare the favorability ratings of Pope Benedict XVI with those of Pope John Paul II. 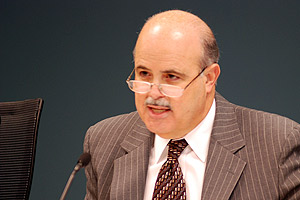 As Pope Benedict XVI prepares for his first papal visit to this country, do Americans have clearly defined views of him, or is his papacy still coming into focus?

The first thing that jumps out from the survey results is that the pope, to a very large extent, will be introducing himself to the country for the first time. The vast majority of Americans know very little about him. Some eight-in-ten, in fact, tell us that they have heard only a little or nothing at all about the pope. That’s even true of his own flock, the Roman Catholic community, 63% of whom tell us that they have heard very little or nothing at all about Pope Benedict. So this trip is, indeed, his introduction to the United States public and to the Catholic community in the U.S.

The survey shows that nearly three-quarters of American Catholics and more than half of all Americans view Pope Benedict XVI favorably. How does that compare with his predecessor, Pope John Paul II, and other major religious figures?

Very few religious figures, or any other kinds of figures, would want to be compared with Pope John Paul II. The American public had decidedly favorable views of Pope John Paul II from the very beginning. These highly favorable opinions of him increased even more after the assassination attempt, soaring into the low-to-mid-90% approval range, and remained fairly high throughout his entire pontificate. No other pope, at least during the time that the pollsters have been doing polls, can compare with Pope John Paul II on that measure. That includes Pope Benedict, even though a majority of Americans do view him favorably.

On the other hand, about 18% of Americans who have heard of Pope Benedict have an unfavorable opinion of him. That is higher than Pope John Paul II and higher even than popes prior to Pope John Paul II. However, putting all of this into context, one would have to say that Pope Benedict is coming to the United States with a significant amount of goodwill on the part of the American public.

How does the American public perceive Pope Benedict’s ideological leanings?

This is one of the most interesting findings from this latest survey. We asked these same questions last summer, and we see that there has been movement in terms of how people perceive Pope Benedict ideologically. Many fewer perceive him to be conservative today than even eight months ago. Forty-five percent of Americans view him as conservative today; just eight months ago, that figure was at 56%. That shift of 11 percentage points raises an interesting question: Why is that the case? The survey itself doesn’t tell us.

It is interesting to note, though, the kind of press Pope Benedict received when he became pope. In the media, one often heard expressions such as, “God’s Rottweiler,” or the “enforcer of the faith.” Many people clearly had a view of this pope as being very conservative and very rigid, perhaps because that was the image they perceived from the media. It could be that what we’re seeing in these numbers is a softening of that image as people get to know more about him and conclude that he’s more moderate than they thought.

This pope has made headlines and raised eyebrows with his characterization of Islam and its prophet, Muhammad, as well as his assertion that the Roman Catholic Church is the one true church of Christ. What do Americans overall think about the way this pope has promoted relations with other religions?

Here, the American public is deeply split in its views of Pope Benedict. Forty percent say he is only doing a fair or poor job, and about the same number (39%) say he is doing an excellent or good job. Those numbers are higher for Roman Catholics. Among Catholics, 64% say that he is doing a good or excellent job, again a significant improvement from 2007.

It is important to point out, however, that his negatives on that score are not as high as they were back in the summer of 2007. Back then, 46% of people rated him poor or fair on promoting relations with other religions. Today that number is 40%.

Among Catholics who attend Mass regularly, the percentage who believe he has done a good job at promoting interfaith relations is even higher, at 78%. So within his own flock he’s perceived much more positively on this issue. Views among evangelicals, on the other hand, have shifted a little in the negative direction. But overall, the public pretty much is split on this question.