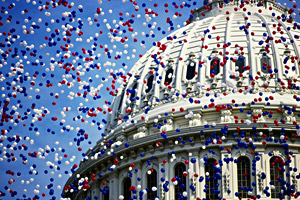 Join the Pew Forum on Religion & Public Life on election night 2008 and the following day for analysis of religion’s role in the election, a preliminary breakdown of how the religious public voted and more. The Pew Forum will host three press conference calls for journalists starting at midnight on election night and continuing through Wednesday, Nov. 5.

Senior Fellow John Green will be available to answer questions from members of the media in the immediate aftermath of the election.

RSVP:
E-mail Robbie Mills at rmills@pewforum.org or call 202.419.4564 to receive the call-in credentials and reserve your place.

RSVP:
E-mail Robbie Mills at rmills@pewforum.org or call 202.419.4564 to receive the call-in credentials and reserve your place.

To listen to an audio transcript, click one of the links below. To save an audio file to your computer, right-click the link and select “Save Target As…”(Internet Explorer) or “Save Link As…”(Firefox).

Luis E. Lugo became the director of the Pew Forum on Religion & Public Life in January 2004. Prior to joining the Pew Forum, he served as the director of the Religion program at The Pew Charitable Trusts in Philadelphia, a position he held for seven years. Before joining the Trusts, he was a professor of political science for more than 12 years, teaching courses in international relations, Latin American politics, and religion and public policy. After studying at the University of Memphis (B.A.) and Villanova University (M.A.), he took his Ph.D. in political science at the University of Chicago. Among his published works are several edited volumes, including Religion, Public Life and the American Polity and Sovereignty at the Crossroads? Morality and International Politics in the Post-Cold War Era. A native of Cuba, he is listed in Who’s Who Among Hispanic Americans. He is married and has three children.

John C. Green is a senior fellow in religion and American politics at the Pew Forum on Religion & Public Life. He also serves as director of the Ray C. Bliss Institute of Applied Politics and Distinguished Professor of Political Science at the University of Akron.

John has done extensive research on American religious communities and politics. Before joining the Pew Forum, he enjoyed along association with it and other projects supported by The Pew Charitable Trusts. Since 1990, the Trusts have supported his widely cited surveys, conducted in presidential election years, on the political fault lines running through America’s religious landscape. John is also co-author of The Diminishing Divide: Religion’s Changing Role in American Politics (Brookings Institution Press, 2000), with Andrew Kohut, president of the Forum’s parent organization, the Pew Research Center, and Scott Keeter, the Center’s director of survey research.

In addition to publishing his most recent book The Faith Factor: How Religion Influences American Elections (2007), John is also the co-author of The Values Campaign: The Christian Right in American Politics (Georgetown University Press, 2006), The Bully Pulpit: The Politics of Protestant Clergy (University Press of Kansas, 1997), and Religion and the Culture Wars (Rowman & Littlefield, 1996). In addition he has published more than 60 scholarly articles and more than 35 essays in the popular press. He is widely known as an observer of national and Ohio politics, and is frequently quoted in the press, including The New York Times, The Washington Post, Newsweek, Time, NPR, CNN, ABC and CBS. The Los Angeles Times described Green as the nation’s “pre-eminent student of the relationship between religion and American politics.”

Green received his Ph.D. in Political Science from Cornell University in 1983 and his B.A. in Economics from the University of Colorado in 1975.

Gregory A. Smith is a Research Fellow at the Pew Forum on Religion & Public Life, where he contributes to the Forum’s survey research efforts. Greg holds a Ph.D. in government from the University of Virginia. His doctoral dissertation on the influence of priests on the voting behavior and political attitudes of American Catholics won the 2006 Aaron Wildavsky Award, which is given by the American Political Science Association for the best dissertation in religion and politics. His book, Politics in the Parish: The Political Influence of Catholic Priests, was published by Georgetown University Press in 2008.

Previously, Greg was a fellow at the University of Virginia Center on Religion and Democracy. Greg is also a contributor to the Encyclopedia of American Political Parties and Elections. His work has appeared in the Journal for the Scientific Study of Religion and has been presented at national and regional conferences.

David Masci is a senior research fellow at the Pew Forum on Religion & Public Life, where he is the in-house expert on church-state issues. In this capacity, David conducts research and writing and gives public presentations and media interviews on various religion and law topics. Before joining the Forum, David worked for 14 years as a journalist for Congressional Quarterly, writing for many of the company’s publications, including The Daily Monitor, CQ Weekly and, most recently, The CQ Researcher. His work has been published in The Washington Post, The Boston Globe, the Los Angeles Times and a host of other national and regional newspapers.

A Post-Election Look at Religious Voters in the 2008 Election

How the News Media Covered Religion in the General Election

How the Faithful Voted