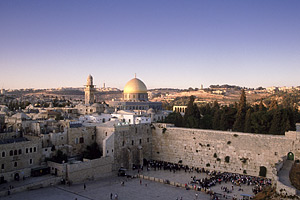 The Western Wall and the Dome of the Rock, in Jerusalem’s Old City. (Photo: Benjamin Rondel/Corbis)

The Pew Research Center’s Forum on Religion & Public Life has assembled a variety of resources on the Israeli-Palestinian conflict, including reports, event transcripts, polling data and news clips.

Event
America and Islam After Bush
Dec. 8, 2008
Vali Nasr, author of the 2006 book The Shia Revival, surveyed the geo-political landscape of today’s Middle East, arguing that the 2003 invasion of Iraq has fundamentally shifted the region’s balance of power.

Q&A
Looking for a Way Out: Rethinking the Arab-Israeli Conflict
July 11, 2007
Sari Nusseibeh, the chief representative for the Palestine Liberation Organization (PLO) in Jerusalem in 2001 and 2002, has advocated coexistence over violence for more than two decades. He spoke with the Pew Forum in July 2007.

Analysis
A Six-Day War: Its Aftermath in American Public Opinion
May 30, 2007
Public opinion surveys over the years show that Americans’ lopsided division of support in favor of Israel has persisted through every war in the region.

Event Transcript
Israel and the Future of Zionism
Dec. 4, 2006
Peter Berkowitz, a Hoover Institution fellow, and Ari Shavit, a columnist for the Israeli paper Ha’aretz, offer a brief history of Zionism and argue for the continuing importance of the Zionist movement.

Survey
Americans’ Views of God, Biblical Prophesy and Israel
Aug. 24, 2006
A substantial minority of the public views the state of Israel through a religious lens.

Q&A
Anti-Semitism and Anti-Americanism
May 5, 2006
In his book, Überpower: The Imperial Temptation of America, Josef Joffe offers an analysis of the danger and burden of America’s standing as a singular global power. Joffe was interviewed following an event on Capitol Hill co-sponsored by the Pew Forum and the Council on Foreign Relations.

Fact Sheet
American Evangelicals and Israel
2004
Surveys by the Pew Forum on Religion & Public Life demonstrate that American evangelical Protestants have distinctive – and highly positive – attitudes toward the state of Israel.

A Six-Day War: Its Aftermath in American Public Opinion

Faith at War: Reports from the Islamic World

Religion and Security: The New Nexus in International Relations

Liberty and Power: A Dialogue on Religion and U.S. Foreign Policy

Ministering to Those in Need: The Rights and Wrongs of Missions and Humanitarian Assistance in Iraq