Tolerance and Tension: Islam and Christianity in Sub-Saharan Africa

Most people in sub-Saharan Africa now identify with either Christianity or Islam. In most of the 19 countries surveyed by the Pew Research Center’s Forum on Religion & Public Life, 90% or more of the respondents say they belong to one of these faiths. This is in sharp contrast with the religious composition of the region about 100 years ago, when, according to a Pew Forum analysis of historical information from the World Religion Database, less than a quarter of the population identified as either Christian or Muslim.

As the map in the preface to this report shows, sub-Saharan Africa is much more religiously mixed than northern Africa, where the population is overwhelmingly Muslim. Overall, however, Christians outnumber Muslims in sub-Saharan Africa by about two-to-one. As the map also shows, the ratio of Christians to Muslims increases the further south one goes in the continent. Muslim populations are especially concentrated in a large geographic belt running west to east from Senegal to the Horn of Africa.1 Southern Africa is predominantly Christian.

In three of the countries surveyed (Djibouti, Mali and Senegal), Muslims clearly outnumber Christians. In four countries (Chad, Guinea Bissau, Nigeria and Tanzania), the number of Christians and Muslims is more equally divided, with a ratio of less than two-to-one in either direction.2 The other countries surveyed are predominantly Christian with Muslim minorities of varying sizes. In Cameroon, Ethiopia, Liberia and Mozambique, Muslims account for between 15% and 30% of survey respondents. In the Democratic Republic of the Congo, Ghana, Kenya and Uganda, between 10% and 15% of respondents are Muslim. And in Botswana, Rwanda, South Africa and Zambia, the survey finds that 5% or less identify as Muslim. Nigeria, the most populous country in all of Africa, has the largest number of Muslims as well as the largest number of Christians in the region.3

As discussed elsewhere in this report, many Christians and Muslims in sub-Saharan Africa retain beliefs and rituals that are characteristic of traditional African religions. In most countries, however, less than one-in-twenty say this is their primary religious affiliation. Liberia is the only country where more than one-in-ten (12%) identify primarily with an African traditional religion.

Unlike in Europe and the United States, very few people in sub-Saharan Africa say they are unaffiliated with a particular faith. Mozambique, Botswana and South Africa are the only countries surveyed where a significant number of people (roughly one-in-ten) describe their religion as atheist, agnostic or “nothing in particular.” In all the other countries, the figure is closer to zero. 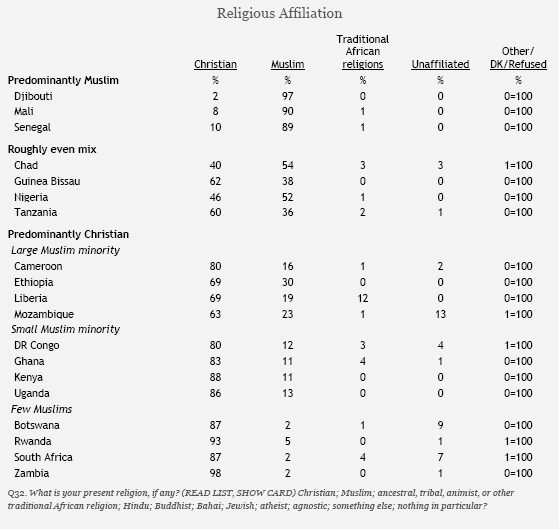 This chapter includes information on:

1 The Horn of Africa is a peninsula in the easternmost part of North East Africa, on the Gulf of Aden and the Indian Ocean. It includes Somalia, Ethiopia, Eritrea and Djibouti. (back to text)

2 The World Religion Database estimates that roughly four-in-ten people in Guinea Bissau are Muslim and approximately one-in-ten are Christian, with the rest of the population associated with traditional African religions. The Pew Forum’s survey finds a similar number of people in Guinea Bissau identifying themselves as Muslim (38%) but a much higher percentage identifying themselves as Christian (62%) and very few describing themselves mainly as practitioners of traditional African faiths. (back to text)

3 Nigeria’s 2006 census did not ask about religious affiliation, and recent estimates of the numbers of Muslims and Christians in the country vary. According to the 2003 Demographic and Health Survey, for example, Muslims constituted 50% of the population, while the 2008 DHS figure is 45% and the Nigerian Ministry of Health’s 2008 estimate is 50%. The Pew Forum’s survey found 52% of the population is Muslim. Regardless of the variation, it is still true that Nigeria has both the largest number of Muslims and the largest number of Christians in the region. (back to text)

Next: Chapter 2: Commitment to Christianity and Islam Next Page → ← Prev Page