Faith on the Hill – The Religious Composition of the 112th Congress

Navigate this Analysis:
The New, 112th Congress
Differences Between Chambers, Parties and Newly Elected/Incumbents
A Look Back

Many analysts described the November 2010 midterm elections as a sea change, with Republicans taking control of the U.S. House of Representatives and narrowing the Democratic majority in the Senate. But this political overhaul appears to have had little effect on the religious composition of Congress, which is similar to the religious makeup of the previous Congress and of the nation, according to an analysis by the Pew Research Center’s Forum on Religion & Public Life.

The 112th Congress, like the U.S. public, is majority Protestant and about a quarter Catholic. Baptists and Methodists are the largest Protestant denominations in the new Congress, just as they are in the country as a whole.

Perhaps the greatest disparity between the religious makeup of Congress and the people it represents, however, is in the percentage of the unaffiliated – those who describe their religion as atheist, agnostic or “nothing in particular.” According to information gathered by CQ Roll Call and the Pew Forum, no members of Congress say they are unaffiliated. By contrast, about one-sixth of U.S. adults (16%) are not affiliated with any particular faith. Only six members of the 112th Congress (about 1%) do not specify a religious affiliation, which is similar to the percentage of the public that says they don’t know or refuses to specify their faith.1

These findings are based on a comparison of the religious affiliations of members of the new Congress with data on the U.S. public from the U.S. Religious Landscape Survey, conducted by the Pew Forum in 2007 among more than 35,000 U.S. adults. CQ Roll Call gathered information on the religious affiliations of members of Congress through questionnaires and follow-up phone calls to members’ offices. The Pew Forum supplemented that information with an extensive review of media reports on candidates in 2010 House and Senate races. It should be noted, however, that there is an important difference between a confidential telephone survey of a sample of U.S. adults and media inquiries about the religious identification of an elected official or candidate. Media inquiries may find fewer “unaffiliated” people because those inquiries are more public.

Of the 535 members of the new Congress, 304 – or 57% – are Protestants, which is slightly higher than the share of Protestants in the U.S. adult population (51%). Compared with the previous Congress, the 112th Congress has added 12 Protestants, an increase of roughly two percentage points.

Baptists remain the largest Protestant denominational family in Congress, essentially unchanged from the 111th Congress, though there are somewhat fewer self-described Baptists on Capitol Hill (13%) than in the national population (17%). Methodists have declined slightly in their proportion of Congress, dropping by six members, or about one percentage point. Nonetheless, Methodists still comprise a larger share of Congress (10%) than of the public (6%).

Some other Protestant groups also are overrepresented in Congress relative to their numbers in the general population. For instance, while fewer than 2% of American adults identify themselves as Episcopalians, about 8% of Congress is affiliated with the Episcopal Church. In addition, 8% of Congress is Presbyterian, about three times the percentage of American adults who say they are Presbyterians (3%).

Protestants who do not specify a particular denomination grew the most from the 111th to the 112th Congress, increasing their ranks by 19 members, to a total of 58. They now comprise 11% of Congress, up from 7% two years ago. The proportion of unspecified Protestants is nearly as high among incumbents (10%) as among newly elected members (13%). It is unclear whether any of these unspecified Protestants are affiliated with nondenominational churches; just two members of the 112th Congress specify that they belong to nondenominational Protestant churches.

If Protestants are not counted together but as separate denominations, then Catholics are the largest religious group in the 112th Congress, with 156 members. Compared with the previous Congress, their ranks have thinned by five members. Still, Catholics comprise about 29% of the House and Senate, compared with about one-quarter of the U.S. adult population (24%).

Jews, who make up about 2% of the U.S. adult population, account for 7% of Congress as a whole and 12% of the Senate. However, there are six fewer Jewish members in the 112th Congress than there were in the 111th, a one-percentage-point decline. Mormons also make up about 2% of the U.S. public and a slightly larger portion of Congress (nearly 3%). That figure is about the same as in the previous Congress; there are 15 Mormons in the 112th Congress, one more than previously.2

Some other small religious groups are about as numerically well-represented on Capitol Hill as in the general population. Muslims, who account for 0.6% of the U.S. adult population, make up 0.4% of Congress, while Buddhists make up 0.7% of the U.S. adult population and 0.6% of Congress. There are no Jehovah’s Witnesses, Hindus or people who practice other world religions in Congress; these groups each have a small presence (less than 1%) in the U.S. population as a whole. 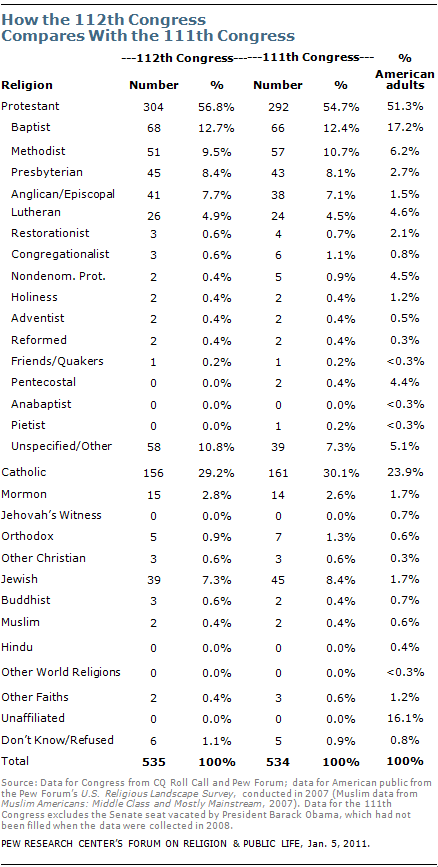 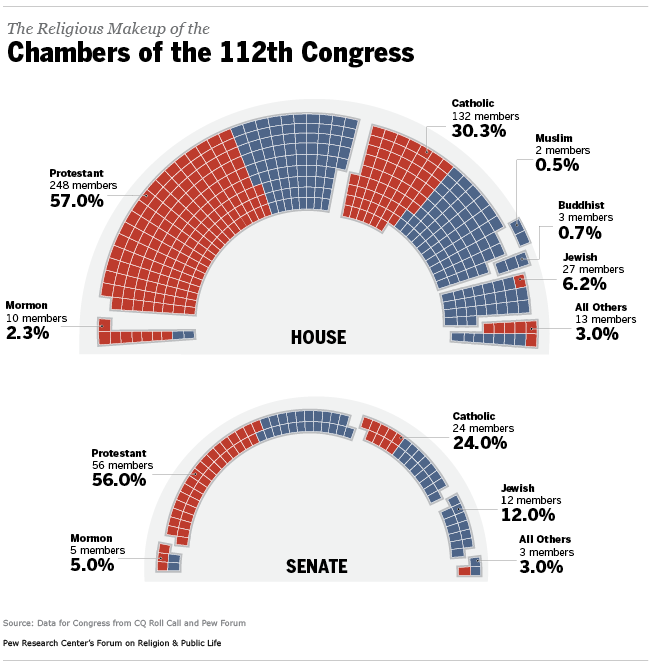 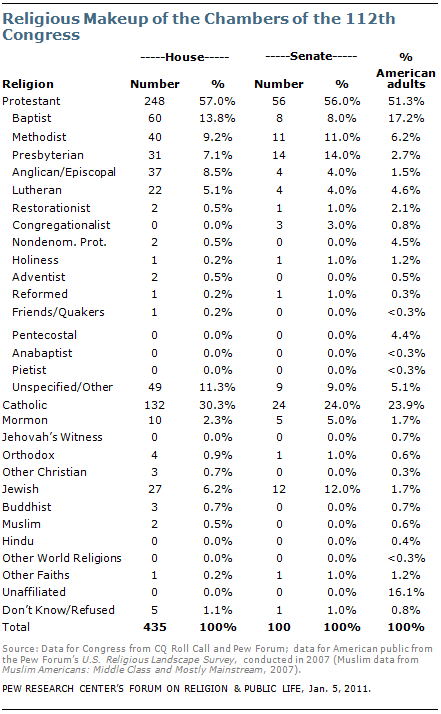 Differences are even more pronounced at the party level. While 69% of congressional Republicans are Protestant, fewer than half of Democrats (43%) belong to Protestant denominational families. On the other hand, Catholics make up a greater share of Democratic members (34%) than they do of GOP members (25%). And while Jews make up 15% of all congressional Democrats (including two independents who generally caucus with the Democrats), they account for less than 1% of congressional Republicans; there is one Jewish Republican in the House and none in the Senate. 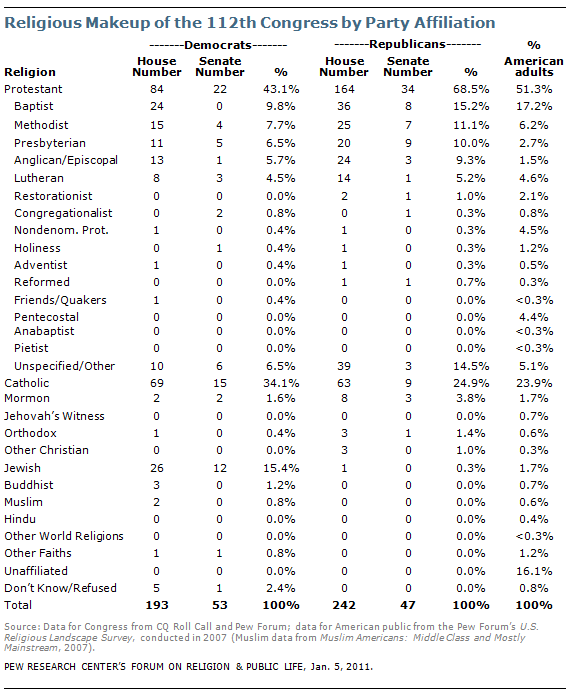 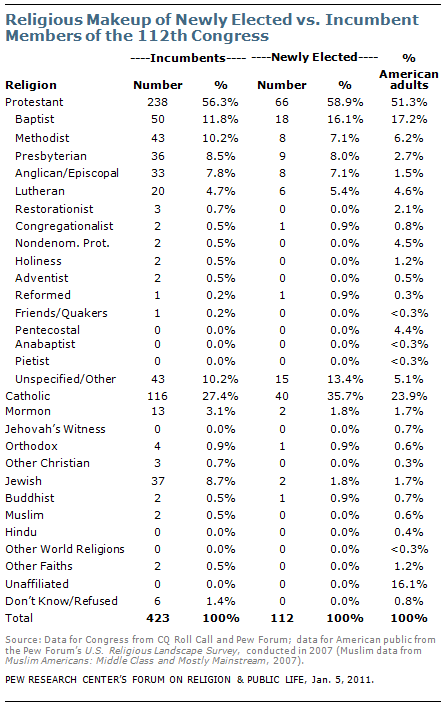 In many ways, the changes in the religious makeup of Congress during the last half-century mirror broader changes in American society. Congress, like the nation as a whole, has become much less Protestant and more religiously diverse. The number of Protestants in Congress has dropped from nearly three-quarters (74%) in 1961 to 57% today, which roughly tracks with broader religious demographic trends during this period. As recently as the early 1980s, General Social Surveys found that nearly two-thirds of Americans identified themselves as Protestants. In the Pew Forum’s U.S. Religious Landscape Survey, conducted in 2007, the portion of self-identified Protestants was just over half (51%).

Likewise, many of the major Protestant denominational families have lost ground in Congress in the past 50 years. Methodists, who made up nearly one-in-five members (18%) of the 87th Congress, which was seated in 1961, make up a little less than 10% of the 112th Congress. Some other largely mainline Protestant denominational families also have seen a decline in their numerical representation in Congress. For example, Episcopalians have gone from 12% to 8% and Congregationalists from 5% to less than 1% during this period.

A few Protestant groups have fared somewhat better, however. From 1961 to today, the number of Baptists in Congress has remained roughly the same, at around 12%, as has the Lutheran share (around 4%).

Meanwhile, other religious groups have seen their share of congressional seats grow, in some cases dramatically. Catholics, for instance, have gone from 19% of the congressional membership in 1961 to 29% today. The percentage of Jewish members of Congress has risen from 2% in 1961 to 7% today.

The first Jewish member of Congress did not arrive until 1845, when Lewis Charles Levin of the American Party began representing Pennsylvania in the House. The first Mormon in Congress, John Milton Bernhisel, began serving in 1851, after Utah was officially recognized as a territory. Other firsts include California Democrat Dalip Singh Saund, the first and so far only Sikh to serve in Congress, who served three terms starting in 1957. (See a short religious biography of Saund.) 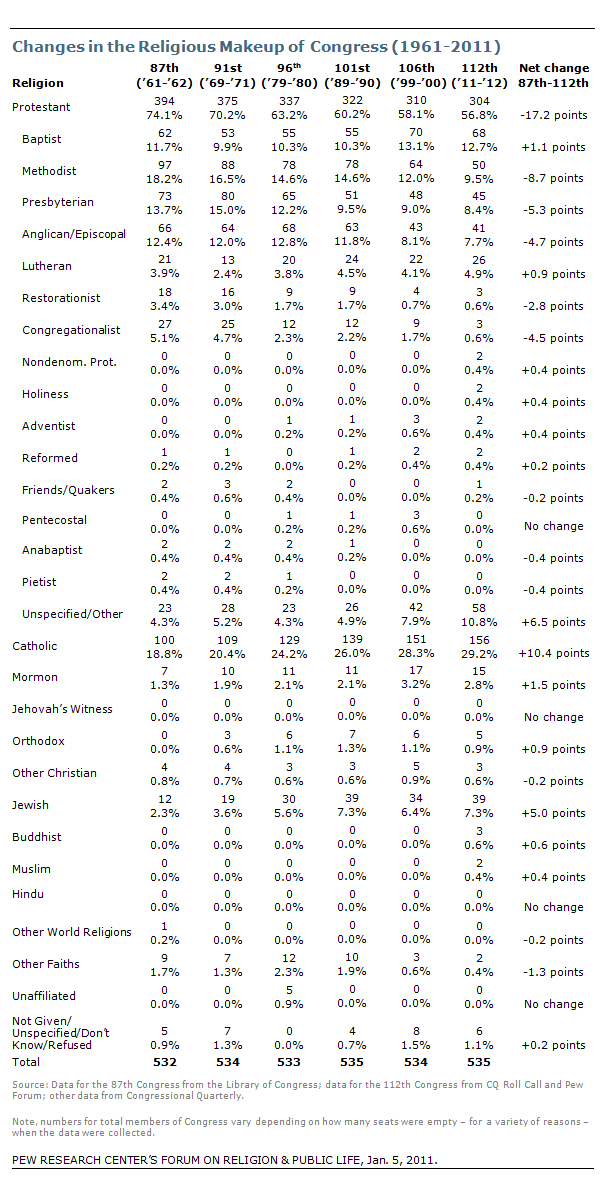 Some other religious groups arrived in Congress much more recently. The first Muslim to serve in either the House or Senate, Rep. Keith Ellison (D-Minn.), as well as the first Buddhists, Reps. Hank Johnson (D-Ga.) and Mazie K. Hirono (D-Hawaii), were seated in 2007. They are all still serving in the 112th Congress.

Also in 2007, Rep. Pete Stark (D-Calif.), a Unitarian who joined Congress in 1973, became the first and so far only member of Congress to publicly declare that he does not believe in a Supreme Being. He was re-elected in 2010.

Not every religious group in the U.S. has had a presence in Congress. For instance, there has yet to be a Hindu or Jehovah’s Witness elected to the House or Senate. Still, if the past is any guide, the number of different faiths among members of Congress will likely continue to grow.

1 All six members of Congress who decline to specify an affiliation are incumbents and are counted in this analysis in the “Don’t Know/Refused” category. In addition, one member of the House of Representatives, Rep. Pete Stark (D-Calif.), identifies his religion as Unitarian but has also said he is an atheist (does not believe in God). He is counted in this analysis in the “Other Faiths” category, which includes Unitarianism. If he were counted, instead, as an atheist and added to the six members in the “Don’t know/Refused” category, the portion of members of Congress who either do not specify a faith or are unaffiliated with any particular faith would still be about 1%.(return to text)

A Fluid Boundary: The Free Exercise Clause and the Legislative and Executive Branches