Restrictions on religious beliefs and practices rose between mid-2006 and mid-2009 in 23 of the world’s 198 countries (12%), decreased in 12 countries (6%) and remained essentially unchanged in 163 countries (82%), according to a new study by the Pew Research Center’s Forum on Religion & Public Life.

Because several countries with increasing restrictions on religion are very populous, however, the increases affected a much larger share of people than of states. More than 2.2 billion people – nearly a third (32%) of the world’s total population of 6.9 billion – live in countries where either government restrictions on religion or social hostilities involving religion rose substantially over the three-year period studied. Only about 1% of the world’s population lives in countries where government restrictions or social hostilities declined.

Among the world’s 25 most populous countries – which account for about 75% of the world’s total population – restrictions on religion substantially increased in eight countries and did not substantially decrease in any. In China, Nigeria, Russia, Thailand, the United Kingdom and Vietnam, the increases were due primarily to rising levels of social hostilities involving religion. In Egypt and France, the increases were mainly the result of government restrictions. The rest of the 25 most populous countries, including the United States, did not experience substantial changes in either social hostilities or government-imposed restrictions.

This is the second time the Pew Forum has measured restrictions on religion around the globe. Like the baseline report, the new study scores 198 countries and territories on two indexes:

Among the five geographic regions covered in the study, the Middle East-North Africa region had the largest proportion of countries in which government restrictions on religion increased, with nearly a third of the region’s countries (30%) imposing greater restrictions. Egypt, in particular, ranked very high (in the top 5% of all countries, as of mid-2009) on both government restrictions and social hostilities involving religion. Egypt was one of just two countries in the world – Indonesia was the other – that had very high scores on both measures as of mid-2009.

Changes in Restrictions Among the 25 Most Populous Countries 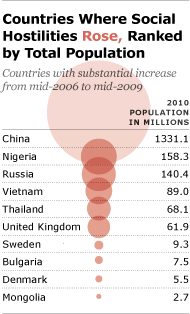 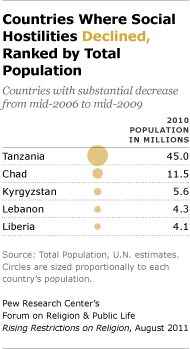 During the three-year period covered by the study, the extent of violence and abuse related to religion increased in more places than it decreased. The number of countries in which governments used at least some measure of force against religious groups or individuals rose from 91 (46%) in the period ending in mid-2008 to 101 (51%) in the period ending in mid-2009. This violence was wide-ranging, including individuals being killed, physically abused, imprisoned, detained or displaced from their homes, as well as damage to or destruction of personal or religious properties.

In nearly three-quarters of all countries, private citizens or groups committed crimes, malicious acts or violence motivated by religious hatred or bias. Such acts occurred in 142 countries (72%) in the period ending in mid-2009, about the same as in the previous reporting period.  The number of countries that experienced mob violence related to religion rose from 38 (19%) as of mid-2008 to 52 (26%) as of mid-2009. 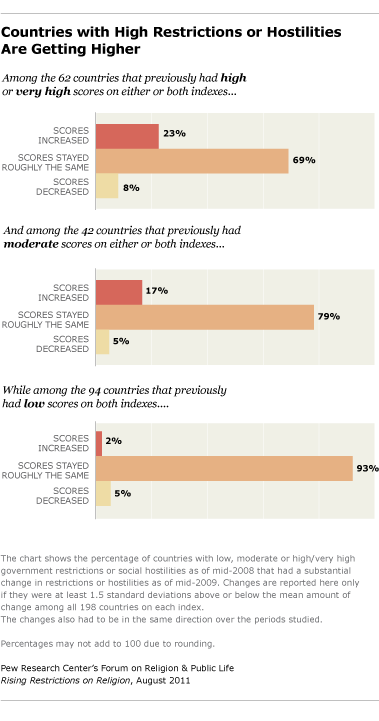 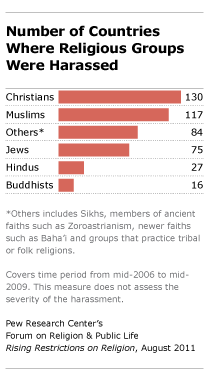 Adherents of the world’s two largest religious groups, Christians and Muslims, who together comprise more than half of the global population, were harassed in the largest number of countries.1 Over the three-year period studied, incidents of either government or social harassment were reported against Christians in 130 countries (66%) and against Muslims in 117 countries (59%). Buddhists and Hindus – who together account for roughly one-fifth of the world’s population and who are more geographically concentrated than Christians or Muslims – faced harassment in fewer places; harassment was reported against Buddhists in 16 countries (8%) and against Hindus in 27 countries (14%).

In proportion to their numbers, some smaller religious groups faced especially widespread harassment. Although Jews comprise less than 1% of the world’s population, government or social harassment of Jews was reported in 75 countries (38%). Incidents of harassment involving members of other world religions – including Sikhs, ancient faiths such as Zoroastrianism, newer faith groups such as Baha’is and Rastafarians, and localized groups that practice tribal or folk religions – were reported in 84 countries (42%). (For more details, see Harassment of Particular Religious Groups .)

In addition, the study finds that restrictions on religion are particularly common in countries that prohibit blasphemy, apostasy or defamation of religion. While such laws are sometimes promoted as a way to protect religion, in practice they often serve to punish religious minorities whose beliefs are deemed unorthodox or heretical. (For more details, see Laws Against Blasphemy, Apostasy and Defamation of Religion.)

These are among the key findings of Rising Restrictions on Religion, the Pew Forum’s second report on global restrictions on religion. The 198 countries and self-administering territories covered by the study contain more than 99.5% of the world’s population. Each country was scored on a total of 33 measures phrased as questions about government restrictions or social hostilities involving religion. (For the full question wording, see the Summary of Results.) The Government Restrictions Index is comprised of 20 questions; there are 13 questions on the Social Hostilities Index. 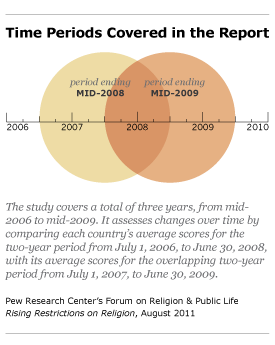 To answer the questions that make up the indexes, Pew Forum researchers combed through 18 widely cited, publicly available sources of information, including reports by the U.S. State Department, the U.S. Commission on International Religious Freedom, the U.N. Special Rapporteur on Freedom of Religion or Belief, the Council of the European Union, the United Kingdom’s Foreign & Commonwealth Office, Human Rights Watch, the International Crisis Group, the Hudson Institute, Freedom House and Amnesty International. (For the complete list of sources, see the Methodology.) Many of the examples cited in this report were drawn from the State Department’s annual International Religious Freedom reports.

The researchers involved in this process recorded only concrete reports about specific government laws, policies and actions, as well as incidents of religious violence or intolerance by social groups; they did not rely on the commentaries or opinions of the sources. (For a more detailed explanation of the coding and data verification procedures, see the Methodology.) The goal was to devise a battery of quantifiable, objective measures that could be analyzed individually as well as combined into two comprehensive indexes, the Government Restrictions Index and the Social Hostilities Index.

The Forum’s baseline report on global restrictions on religion calculated each country’s average scores on the Government Restrictions Index and Social Hostilities Index for the two-year period from mid-2006 to mid-2008. This report assesses changes over time by comparing each country’s original scores with its average scores for the overlapping two-year period from mid-2007 to mid-2009.2 Comparing rolling averages for overlapping time periods reduces the impact of year-to-year fluctuations and helps identify consistent trends.

This report focuses on changes in countries’ scores on the indexes that are deemed to be “substantial.” (The report refers to a change in a country’s score as substantial only if it is at least 1.5 standard deviations above or below the mean amount of change among all 198 countries on each index. The change also had to be in the same direction over the two periods studied, meaning that it had to rise or fall both in the period from mid-2006 to mid-2008 and in the overlapping period from mid-2007 to mid-2009. See the Methodology for more details.) 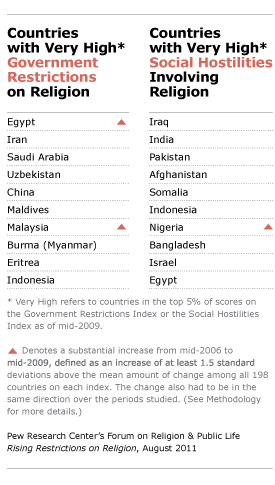 Government restrictions or social hostilities were high or very high in about one-third of the countries as of mid-2009. But because some of the most restrictive countries are very populous, nearly 70 percent of the world’s 6.9 billion people were living in countries where governments imposed high restrictions on religion or where there were high levels of religious hostilities in society.

Six of the 14 countries where government restrictions rose substantially were in the Middle East-North Africa region: Algeria, Egypt, Libya, Qatar, Syria and Yemen. In Egypt, for example, the government maintained a longstanding ban on the Muslim Brotherhood, an influential Islamic organization, and discriminated against Christians in various ways, including in public-sector hiring. In Yemen, government officials reportedly sought to intimidate Baha’is and converts to Christianity, including arresting people for promoting Christianity and distributing Bibles. 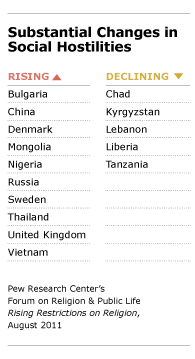 Ten countries had substantial increases in social hostilities involving religion and five had a substantial decline.

As noted above, the level of social hostilities involving religion rose substantially in five European nations: Bulgaria, Denmark, Russia, Sweden and the United Kingdom. Much of the tension in Europe focused on the region’s rapidly growing Muslim population, but in some cases it also reflected rising anti-Semitism and antagonism toward Christian minorities, such as Jehovah’s Witnesses.3

Three of the five countries where social hostilities declined are in sub-Saharan Africa: Chad, Liberia and Tanzania. But social hostilities involving religion rose in Nigeria, the region’s most populous country, where there were a number of violent clashes between Christians and Muslims. 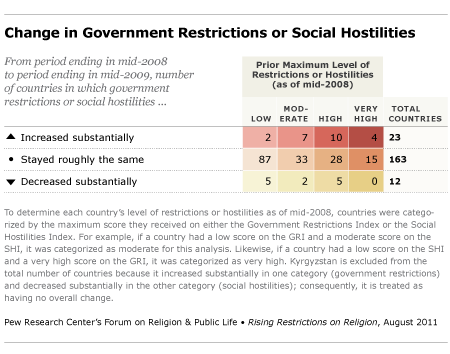 Other key findings from the study include:

Return to Table of Contents at top to continue reading the Full Report.

1 As of 2010, Muslims made up nearly a quarter (23.4%) of the world’s population, according to the Pew Forum’s January 2011 report The Future of the Global Muslim Population.
The Pew Forum is currently compiling population data on other world religions and intends to publish a series of reports on the demography of religion in 2011-2012. In the meantime, the population figures used in this section are from the World Religion Database at Boston University, which estimates that Christians comprise about a third (32.9%) of the world’s population. (return to text)

3 For background on Europe’s growing Muslim population, see the Pew Forum’s January 2011 report The Future of the Global Muslim Population. (return to text)