In the GOP nomination race, Romney and Cain run about even among Republicans and Republican-leaning voters (23% for Romney and 22% for Cain). 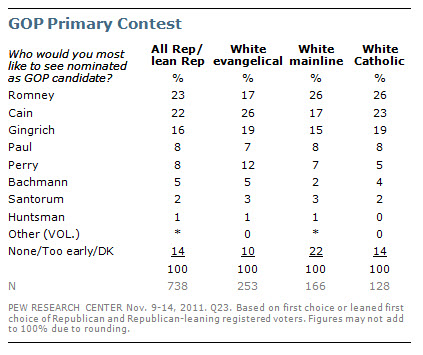 Newt Gingrich trails both Romney and Cain, but Gingrich’s support has doubled in the past month (from 8% to 16%). Currently, 8% favor Rick Perry, down from 17% about a month ago. As many now support Ron Paul for the GOP nomination as favor Perry. (For more, see “Obama Job Approval Improves, GOP Contest Remains Fluid,” Nov. 17, 2011.)

Among white mainline Protestant GOP voters, Romney is the first choice for the nomination (26%) with Cain the next closest candidate at 17%. White Catholic Republicans are more closely divided between these two men with 26% for Romney and 23% for Cain. 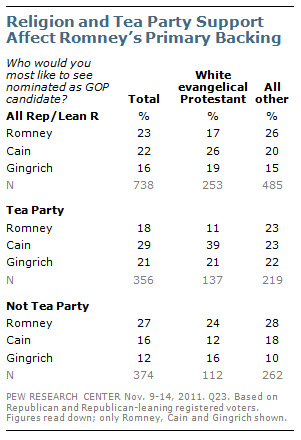 Romney trails Cain slightly among white evangelical Republicans, and he also draws less support among Republican and Republican-leaning voters who agree with the Tea Party. Cain leads Romney among all Tea Party Republican voters (by 29% to 18%).

Romney is weakest among GOP voters who fall into both of these groups – white evangelicals who agree with the Tea Party. Just 11% of these voters support Romney for the GOP nomination, while more than three times as many (39%) back Cain.

When it comes to the general election, Romney does better in a head-to-head matchup with Obama than any of the other top-tier GOP candidates. Looking at all registered voters, white evangelical Protestant voters are just as likely to support Romney over Obama in a general election matchup as they are to support Cain, Gingrich, or Perry against Obama. And among white Catholic and white mainline Protestant voters, Romney holds considerably more appeal than the other GOP contenders. 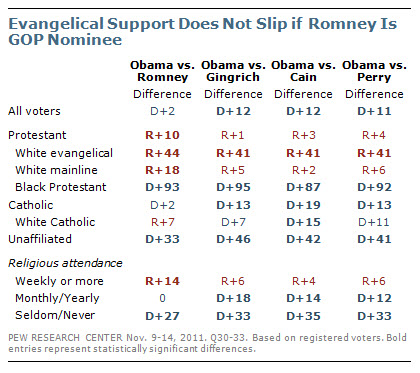 Among all registered voters, 49% favor Obama while 47% support Romney. Obama holds significant leads over other leading Republican candidates (by 11 points over Perry and 12 points over Gingrich and Cain).

Among highly religious voters – those who say they attend religious services at least once a week – Romney has a 14-point lead (55% to 41%) over Obama. Gingrich, Perry and Cain run about even with Obama among these voters. Obama generally has the advantage among voters who attend services less frequently, but Romney ties Obama among voters who attend services only once or twice a month or a few times a year. (For a detailed breakdown of religious and demographic differences in presidential trial heats, see the tables that accompanied the Nov. 17 report.)

Personal Images of the 2012 Candidates

Among all voters, 50% have a favorable opinion of Obama while 48% view him unfavorably. Opinions of the GOP nomination candidates are less favorable, with views of Romney being the most positive. Overall, 38% hold a favorable view of Romney, 45% hold an unfavorable view. 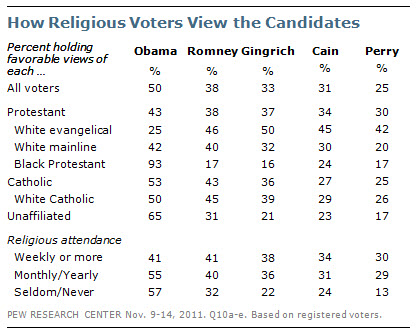 Voters’ personal impressions of Obama and the GOP candidates reflect their voting preferences. These four GOP candidates are viewed much more favorably than Obama among all white evangelicals; comparable percentages have favorable impressions of Gingrich (50% favorable), Romney (46%), Cain (45%) and Perry (42%). Just a quarter of white evangelicals (25%) have a favorable view of Obama.

Obama is viewed far more favorably than the GOP candidates by black Protestant voters and those with no religious affiliation. Fully nine-in-ten black Protestant voters (93%) view him favorably while no more than about a quarter view any of the GOP candidates favorably. And 65% of unaffiliated voters have a favorable impression of Obama, more than double the percentage that have a favorable opinion of any of the Republican candidates.

Romney’s image has changed little since his unsuccessful campaign for the GOP nomination four years ago. Currently, 38% of voters have a favorable view of Romney while 45% express an unfavorable opinion. In February 2008, during the GOP primaries, 34% had a favorable opinion and 43% viewed Romney unfavorably. 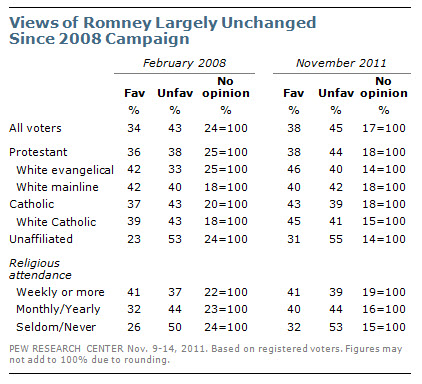 There has been little change in the way that voters among different religious groups view Romney. White evangelical Protestant voters have mixed opinions of Romney (46% favorable, 40% unfavorable); this was also the case in early 2008 (42% favorable, 33% unfavorable), though fewer voters knew enough about Romney to hold an opinion. Similarly, as in February 2008, about as many white Catholic and white mainline voters view Romney favorably as unfavorably.

Romney and Cain: Traits and Characteristics

By contrast, Republican voters are less likely to say Romney understands the needs of people like them (54%), is a strong conservative (53%) and takes consistent positions on issues (47%). And only about a quarter of all GOP voters (24%) say Romney shares their religious beliefs. There are only modest differences across different religious groups – white evangelicals, white mainline Protestants and white Catholics – in these evaluations.

Cain’s image is very different: Only about half of all Republican and Republican-leaning voters say Cain is honest and trustworthy (50%) and well-qualified (49%). But compared with Romney, far more GOP voters say Cain is a strong conservative (64%) and that he takes consistent positions on issues (60%). White evangelicals (70%) are somewhat more likely than white mainline Protestants (58%) or white Catholics (57%) to view Cain as a strong conservative. 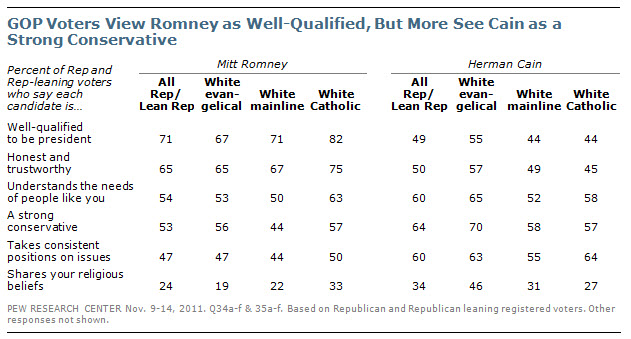 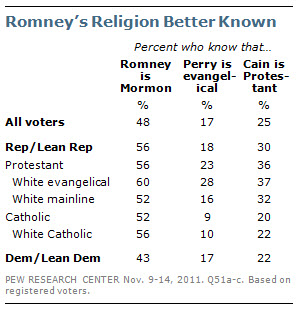 More than half (56%) of Republican and Republican-leaning voters correctly identify Romney’s faith. Fewer Democratic and Democratic-leaning voters know that Romney is a Mormon. Republicans also are more likely than Democrats to know that Cain is a Protestant (30% vs. 22%). But there is no partisan gap in awareness of Perry’s faith.

Among Republican and Republican-leaning voters, members of most religious groups are about equally knowledgeable of Romney’s religion, with six-in-ten white evangelicals (60%) and more than half of white Catholics (56%) and white mainline Protestants (52%) correctly identifying Romney as a Mormon. 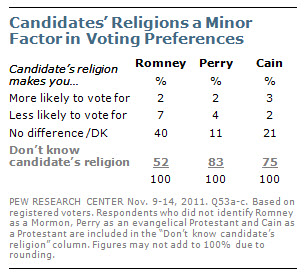 Few voters say that the religion of the GOP candidates will impact their voting decision, either positively or negatively. Very small percentages say that Cain or Perry’s religion makes them either more or less likely to vote for them. 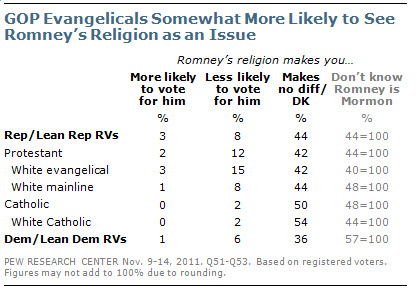 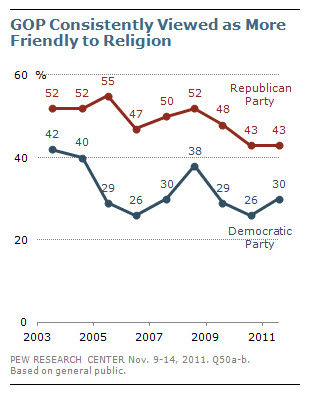 Next: Views of the Mormon Religion Next Page → ← Prev Page