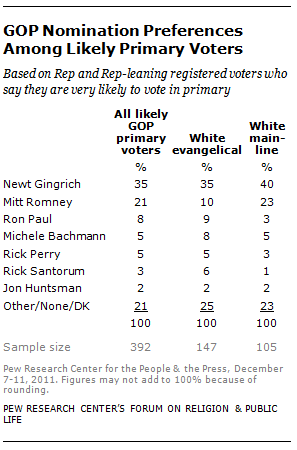 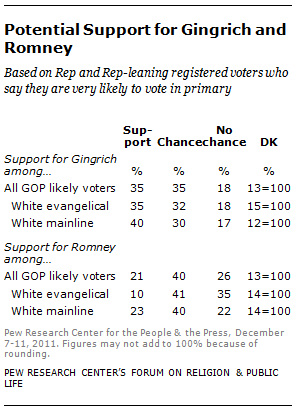 The new survey, conducted Dec. 7-11, also shows that clear majorities of likely GOP primary voters say there is at least a chance they would vote for either Gingrich or Romney in Republican primaries in their state. None of the other GOP candidates draw nearly as much potential support.

Among white mainline Protestants, seven-in-ten say they either support Gingrich (40%) or that they would consider voting for him (30%). Roughly the same percentage say they are open to voting for Romney; 23% currently support him, 40% prefer another candidate but say there is a chance they would vote for Romney. (The survey included too few interviews with members of other religious groups who are also Republican and Republican-leaning likely primary voters to permit analysis of their preferences.) 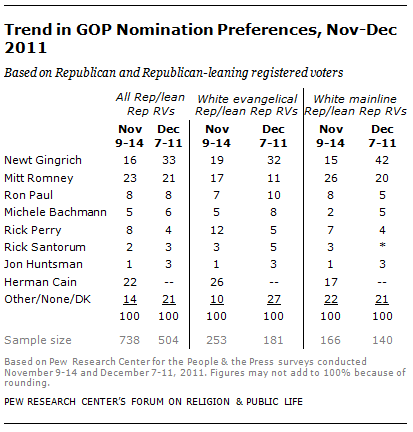 The impact of recent developments in the campaign, including Herman Cain’s suspension of his candidacy, can be seen by comparing the nomination preferences of Republican and Republican-leaning registered voters interviewed in December with those interviewed in mid-November. (The mid-November poll did not have a question identifying likely primary voters.) Support for Gingrich has doubled over the past month among Republican and Republican-leaning registered voters, from 16% in mid-November to 33% in the current survey. Gingrich is the only candidate who has seen his support rise significantly over the past month.

White evangelical Republican and Republican-leaning registered voters now support Gingrich over Romney by a three-to-one margin (32% to 11%), with Romney generating about as much support as Ron Paul (10%) and Michele Bachmann (8%). This is in stark contrast with mid-November — while Cain was still in the race — when evangelicals supported Gingrich and Romney in roughly equal numbers (19% and 17%, respectively).

Among white mainline Protestant Republican registered voters, 42% say Gingrich is their preferred candidate, compared with 20% who support Romney. In mid-November, Romney lead the other candidates among this group.

For a complete discussion of the survey’s findings, see “Gingrich Leads, But Likely GOP Primary Voters Have Not Ruled Out Romney: Tepid Support for Both Leading Candidates.”