A large majority of Mormons say religion is very important in their lives, more than four-in-five pray at least once a day and three-quarters attend religious services weekly or more. Almost all Mormons (98%) accept the traditional Christian teaching that Jesus rose from the dead. Mormons are also nearly unanimous in accepting other teachings of their church that are different from the beliefs of other Christian traditions. For example, 94% of Mormons believe that the president of the LDS Church is a prophet and 91% believe that the Book of Mormon was written by ancient prophets and then translated by Joseph Smith. However, more than one-in-five Mormons (22%) say they find some of the church’s teachings hard to accept, and nearly one-in-ten (8%) say they seldom or never attend religious services. 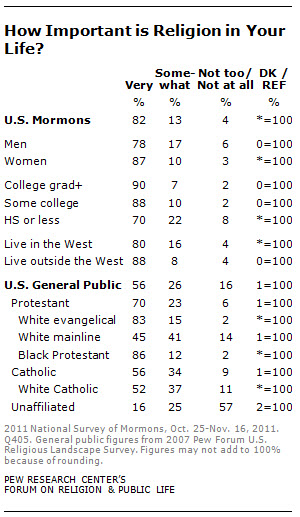 More than four out of five Mormons (83%) pray at least once a day, with nearly two-thirds (64%) saying they pray multiple times per day. Mormons pray at rates similar to those seen among black Protestants (80% pray daily) and white evangelicals (81%). Mormons pray much more frequently than Catholics (58% pray daily) and white mainline Protestants (48%). 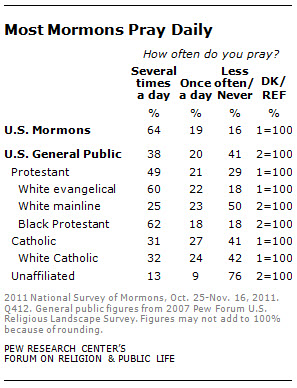 Upwards of three-quarters of Mormons (77%) say they attend religious services at least once a week, and in response to a separate question two-thirds (67%) say they are “very active” in the LDS Church. Mormon rates of worship attendance are well above the national average, with 39% of the general public saying they attend religious services at least weekly. Mormons’ church attendance exceeds that reported by white evangelical Protestants, among whom nearly two-thirds (64%) say they attend church at least once a week. 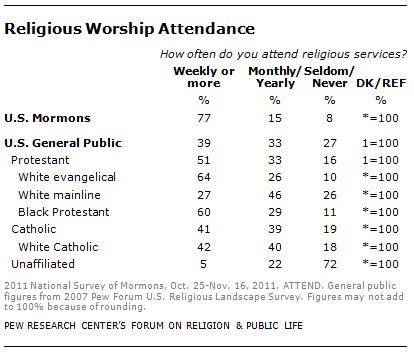 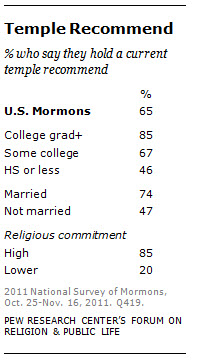 One distinctive aspect of the LDS faith is that worship takes place in two separate contexts. Weekly congregational services and other church activities are held in local meetinghouses or churches. In addition, members in good standing are encouraged to attend a Mormon temple regularly, and many Mormons do this about once a month. In order to attend a temple, members must have a “temple recommend” provided by local leaders and renewed every other year. (For more information on Mormon temples and temple recommends, see the glossary). 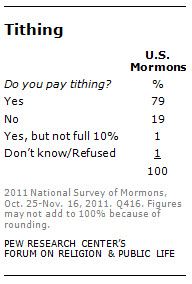 Perhaps the most well-known of the practices distinctive to Mormons is a period of full-time missionary work – which Mormons refer to as a “proselyting” mission (see glossary). Just over one-in-four Mormon adults (27%) has served in such a mission at some point in their lives, though this number is significantly higher for men (43%) than for women (11%). Missionary service is more common among those under age 50, among whom 32% say they served a full-time mission, than among those age 50 and older (21%). More college graduates (48%) and those with some college (26%) have served a mission as compared with those with a high school education or less (10%). And there are more missionaries among those who were raised Mormon than among converts to the faith (31% vs. 16%). This may partly reflect the fact that most full-time Mormon missions are served in early adulthood, whereas many converts to Mormonism joined the church later in life. 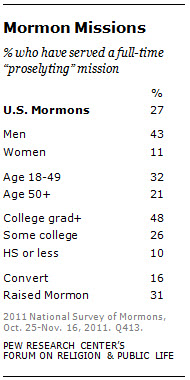 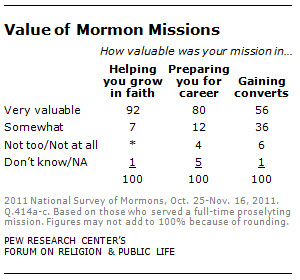 Most Mormons hold many of the same beliefs espoused by other Christian traditions. For example, the Pew Forum’s 2007 U.S. Religious Landscape Survey found that 90% of Mormons express certainty in their belief in God, that 91% believe that the Bible is the word of God and that 98% believe in life after death. And the current survey finds that 98% of Mormons believe in the resurrection of Jesus. 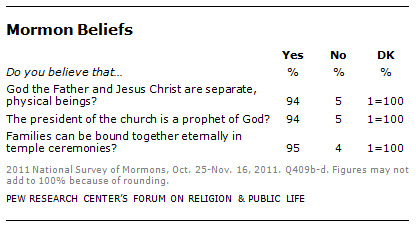 The current survey also shows that Mormons hold firm views on a variety of doctrines that are not shared by other Christian traditions. For example, Mormons are nearly unanimous in the view that God the Father and Jesus Christ are separate, physical beings, with 94% expressing this view. Identically large majorities of Mormons affirm that the president of the LDS Church is a prophet of God (94%) and that families can be bound together eternally in temple ceremonies (95%). Mormons are also united in the belief that the Book of Mormon was written by ancient prophets and translated by Joseph Smith (91%); by comparison, less than one-in-ten say that the Book of Mormon was written by Joseph Smith himself (8%). (For more information on LDS teachings about these and other matters, see the glossary.) 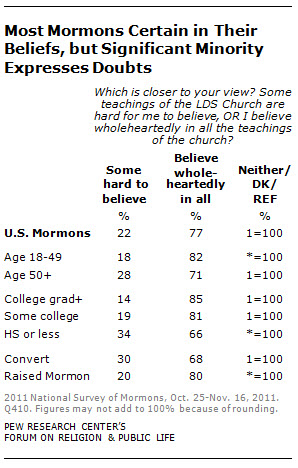 Being a Good Mormon 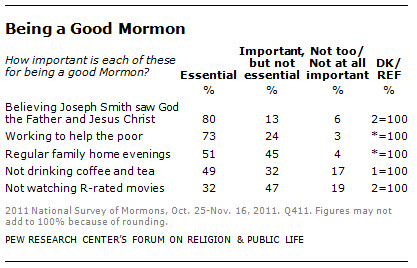 One-third of Mormons (32%) say it is essential for good Mormons to avoid R-rated movies, while 47% say this is important but not essential and 19% say avoiding R-rated movies is not important. 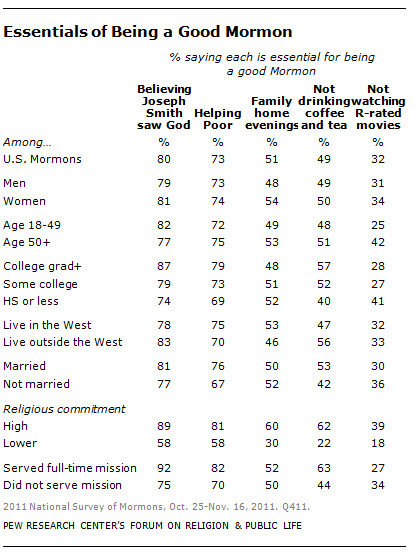 By wide margins, Mormons who exhibit the highest levels of religious commitment are more likely than those with lower religious commitment to say that each of these elements is essential to being a good Mormon. And those who have served a full-time mission are more likely than those who have not served a mission to say that believing Joseph Smith saw God, helping the poor and avoiding coffee and tea are essential for being a good Mormon.

Compared with Mormons under 50, those age 50 and older are much more inclined to say that not watching R-rated movies is central to Mormonism (42% among those over 50, compared with 25% of those under 50). Otherwise, there are only small differences across age groups in opinions about what is central for being a good Mormon.

Married Mormons see helping the poor and avoiding coffee and tea as more central to being a good Mormon as compared with those who are not married. Differences between married and unmarried people are smaller on other requirements for being a good Mormon.

Mormons are encouraged to keep a supply of food in storage in case of emergencies, with church leaders recommending that Mormons keep at least three months of supplies on hand. (For more information on the practice of food storage among Mormons, see the glossary.) Four out of five Mormons interviewed (82%) say they do this, with more than half of all Mormons (58%) saying they keep at least three months of food in storage. 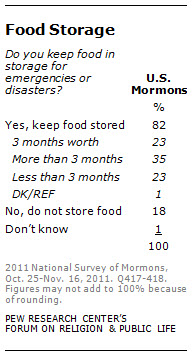 As is the case among members of other religious groups, significant minorities of Mormons express belief in certain tenets more commonly associated with Eastern religions. One-in-ten Mormons (11%) say they believe in reincarnation – that people will be reborn in this world again and again. This is comparable to the number of white evangelical Protestants who hold this belief (and significantly lower than the share of the general population saying they believe in reincarnation). In addition, more than one-in-four Mormons (27%) believe in yoga “not just as exercise, but as a spiritual practice,” comparable to the 23% of the general public who share this belief. 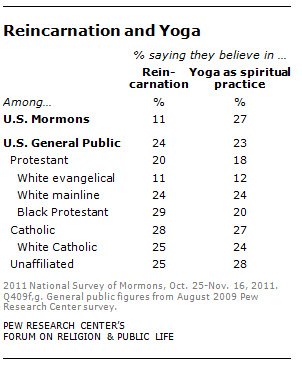 Converts and non-converts have comparable levels of religious commitment, but converts are somewhat more likely to say that some of the teachings of the Mormon faith are hard to accept (30% vs. 20%).

When asked to describe in their own words their reasons for converting to Mormonism, 59% of converts cite the religion’s beliefs as a reason. The most common responses within this category are general statements about the religion being true or making sense (38%), as well as statements about the Book of Mormon or other scriptures (13%). Mormonism’s emphasis on the family and family values is cited as a reason for converting by 5% of converts, and 3% cite the faith’s specific teaching that families can be bound together for eternity. 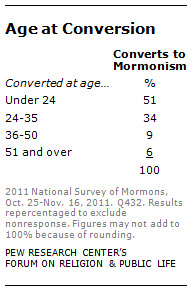 Roughly one-quarter of converts to Mormonism (23%) cite issues of personal spirituality as reasons for their conversion, including 17% who say they felt called by God or “gained a testimony.” About one-in-five converts to Mormonism (21%) cite either the influence of Mormons they interacted with before they converted or an appreciation for the institutions and practices of the LDS Church. Common responses in this category include the work of Mormon missionaries (5%) and positive impressions of Mormon people (4%).

Just over one-in-ten converts (13%) mention a major life change as their reason for becoming Mormon. This includes 12% who say they converted because they married a Mormon or for other family reasons.

Next: Mormons and Family Life Next Page → ← Prev Page