Mormons in America – Certain in Their Beliefs, Uncertain of Their Place in Society

With a Mormon candidate among the front-runners for the 2012 GOP presidential nomination, a musical about Mormons playing on Broadway and The Church of Jesus Christ of Latter-day Saints (LDS) running television ads about ordinary Mormons, America is in the midst of what some media accounts have dubbed a “Mormon moment.”

But how do Mormons themselves feel about the media spotlight, the election campaign and their place in America? A major new survey finds a mixed picture: Many Mormons feel they are misunderstood, discriminated against and not accepted by other Americans as part of mainstream society. Yet, at the same time, a majority of Mormons think that acceptance of Mormonism is rising. Overwhelmingly, they are satisfied with their lives and content with their communities. And most say they think the country is ready to elect a Mormon president.

These are among the findings of a comprehensive survey by the Pew Research Center’s Forum on Religion & Public Life of more than 1,000 Mormons across the country – the first of its kind ever published by a non-LDS research organization. Previous studies, including the Pew Forum’s 2007 U.S. Religious Landscape Survey, have found that Mormons make up slightly less than 2% of the U.S. public.

Six-in-ten Mormons (62%) say the American people as a whole are uninformed about Mormonism. Nearly half (46%) say that Mormons face a lot of discrimination in the U.S. today – which is higher than the percentage that says the same about blacks (31%) and atheists (13%). Two-thirds (68%) say the American people as a whole do not see Mormonism as part of mainstream American society. And when asked to describe in their own words the most important problems facing Mormons living in the United States today, 56% cite misperceptions about Mormonism, discrimination, lack of acceptance in American society and the like.

The nationwide survey of 1,019 Mormons, conducted Oct. 25-Nov. 16, 2011, finds that Mormons share many of the religious practices and beliefs of traditional Christianity. Three-quarters of Mormons (77%) say they attend church at least once a week, 79% say they donate 10% of their earnings to the church, 83% say they pray every day and fully 98% say they believe in the resurrection of Jesus.

Mormons are nearly unanimous in describing Mormonism as a Christian religion, with 97% expressing this point of view. Indeed, when asked to volunteer the one word that best describes Mormons, the most common response from those surveyed was “Christian” or “Christ-centered” (17%), and an additional 5% volunteered “Jesus.” 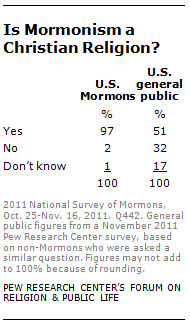 By contrast, many non-Mormons do not see Mormonism as a Christian faith. A November 2011 Pew Research Center survey found that one-third of non-Mormon U.S. adults (32%) say the Mormon faith is not a Christian religion, and an additional 17% are unsure whether Mormonism is Christian. In an open-ended question asking what one word best describes the Mormon religion, the same survey found that the most commonly offered response was “cult.”

There are a number of tenets that are central to the teachings of the LDS Church and widely held by Mormons that are not shared by other Christian traditions. Nine-in-ten Mormons believe that the president of the LDS Church is a prophet of God (94%) and that the Book of Mormon was written by ancient prophets (91%). Similarly large numbers believe that families can be bound together eternally in temple ceremonies (95%) and that God the Father and Jesus Christ are separate, physical beings (94%). (More information on these and other elements of Mormonism can be found in the glossary.)

The survey finds that Mormons place a high priority on family life. Large majorities say that being a good parent (81%) and having a successful marriage (73%) are among their most important goals in life, far surpassing the numbers in the general public who say the same. (See Life Goals for details.)

Geographically, Mormons are heavily concentrated in the western part of the United States. In this survey, 71% of the respondents reside in the West, including more than half (53%) who reside in states in the Mountain West and 34% who live in Utah (which is part of the Mountain West).2 In terms of their racial and ethnic background, Mormons are overwhelmingly white; 88% of the current sample is comprised of white non-Hispanics, while 7% are Hispanic, 1% are black non-Hispanic and 4% are of other racial and ethnic backgrounds.

Politically, Mormons are quite conservative and supportive of the Republican Party – even compared with other people who share some of their demographic characteristics. Two-thirds of Mormons (66%) describe themselves as politically conservative, and three-quarters of Mormon voters (74%) identify with or lean toward the Republican Party. By comparison, Pew Research Center surveys conducted from September-November 2011 find that 37% of U.S. adults describe themselves as conservative (including 40% of white non-Mormons residing in the Mountain West). And 45% of registered voters in the population as a whole (and 60% of white non-Mormons in the Mountain West) identify with the Republican Party.

Being Mormon During a “Mormon Moment”

Many Mormons (54%) say that the way their religion is portrayed in television and movies hurts society’s image of Mormons in general. Far fewer (15%) say their image is helped by the portrayal of Mormons in entertainment media.

The survey confirms that Mormons are highly religious. About eight-in-ten (82%) say that religion is very important in their lives. A similar number (83%) says they pray every day. And upwards of three-quarters (77%) say they attend religious services at least once a week. More than two-thirds of Mormons (69%) fit all three of these descriptions, saying that religion is very important to them, that they pray every day and that they go to church every week. By this measure, Mormons exhibit higher levels of religious commitment than many other religious groups, including white evangelical Protestants. 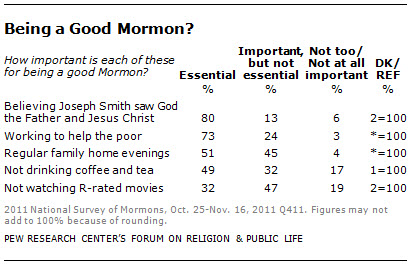 Another distinctive aspect of Mormonism is the tradition of young adults participating in full-time missionary service (usually for a period of two years), called a proselyting mission. (See glossary.) The survey finds that roughly one-quarter of Mormons (27%) have served a full-time mission, including more than four-in-ten men (43%) and 11% of women. Slightly more than half of the former missionaries surveyed (56%) say their mission was very valuable in gaining converts to the LDS Church. And even larger majorities say their missionary experience was very valuable in helping them prepare for career success (80%) and for helping them to grow in their own faith (92%).

Mormons tend to be quite conservative in their political leanings and in their views on social and moral issues. Two-thirds (66%) call themselves conservatives, and three-quarters of Mormon registered voters (74%) are Republican or lean toward the Republican Party. These ideological and partisan leanings are reflected in their views of President Barack Obama, whose favorability rating among Mormon voters (25%) is half of what it is among voters in the public as a whole.

Mormons express highly positive views of GOP presidential candidate Mitt Romney (a fellow Mormon). Romney is viewed favorably by 86% of all Mormon voters and 94% of Mormons who are Republican or lean Republican. But even among Mormon Democrats and Democratic-leaning registered voters, 62% rate Romney favorably. In fact, Romney’s favorability rating is about as high among Mormon Democrats as it is among Republicans in the general population (56%).

Mormons also tend to be conservative on other political issues. Three-quarters of Mormons (75%) say they prefer a smaller government providing fewer services to a bigger government providing more services; among the general public, 48% express a preference for smaller government. But Mormons are divided as to whether immigrants strengthen the U.S. because of their hard work and talents (45%) or burden the U.S. by taking American jobs, housing and health care (41%). On this question, Mormons’ views closely resemble those of the public as a whole. 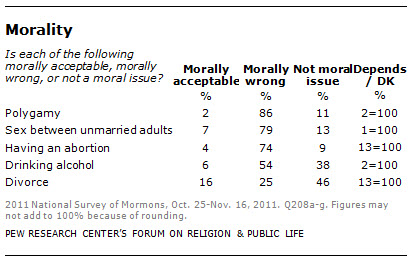 Mormons’ conservatism also extends to a variety of other moral issues. Nearly eight-in-ten (79%) say that sex between unmarried adults is morally wrong, far higher than the 35% of the general public who hold the same view. Three-quarters of Mormons (74%) say that having an abortion is morally wrong (compared with 52% of the general public). And 54% of Mormons say that drinking alcohol is morally problematic, more than three times the percentage of all U.S. adults who express moral reservations about drinking alcohol (15%).

Polygamy was officially banned by the LDS Church in 1890, and the survey finds little acceptance of polygamy among Mormons. Nearly nine-in-ten (86%) say it is morally wrong, 11% of Mormons say polygamy is not a moral issue and 2% say it is morally acceptable.

The survey confirms that family life is very important to most Mormons. Four out of five Mormons (81%) believe that being a good parent is one of the most important goals in life, and roughly three out of four Mormons (73%) put having a successful marriage in this category. This puts family concerns significantly above career concerns, having free time and even living a very religious life as priorities for Mormons.

Other key findings of the Pew Forum’s 2011 National Survey of Mormons include:

The subsequent sections of the report describe the survey’s findings in more detail. Results are based on interviews conducted among a national sample of 1,019 Mormons between Oct. 25 and Nov. 16, 2011. Interviews were conducted with respondents who currently describe their religion as “Mormon.” The survey does not include interviews with former Mormons or respondents with Mormon backgrounds and heritage who no longer consider themselves to be Mormon. It also does not include Mormons living outside the United States. (According to the LDS Church, more than half of all Mormons live outside the U.S.) Full details on the survey’s methodology are included in section 5.

2 The states in the Mountain West are Arizona, Colorado, Idaho, Montana, Nevada, New Mexico, Utah and Wyoming. More broadly, the West (a geographic category frequently analyzed in this report) includes these states as well as Alaska, California, Hawaii, Oregon and Washington. (return to text)