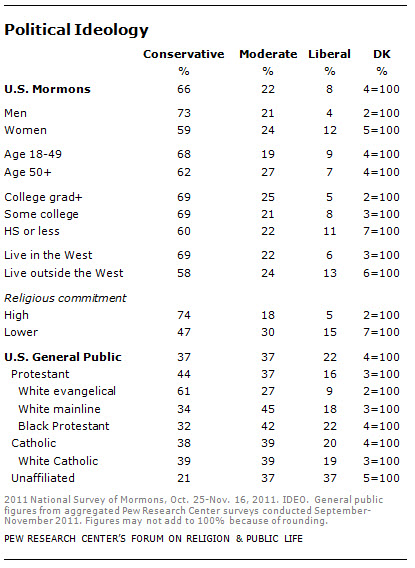 Nearly three-in-four Mormon registered voters (74%) either identify as Republican (52%) or lean toward the Republican Party (22%). Far fewer (17%) identify with or lean toward the Democratic Party. By comparison, the general public is much more evenly split between the two parties, with 45% of all registered voters favoring the GOP and 48% favoring the Democratic Party in Pew Research Center polls conducted September-November 2011. White evangelical Protestants (68% of whom identify with or lean toward the GOP) are the only other large religious group that rivals Mormons’ level of support for the Republican Party; white mainline Protestants, black Protestants, Catholics and the religiously unaffiliated are all far less Republican than are Mormons. 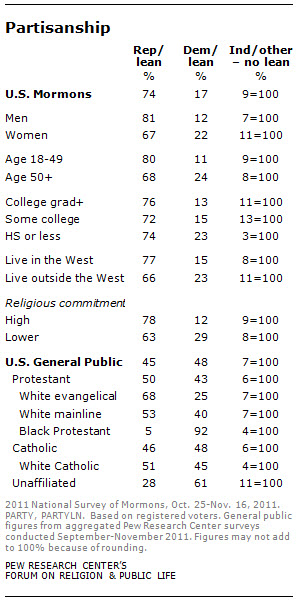 Majority support for the Republican Party is seen across a variety of Mormon subgroups, but some groups are more unified than others in their support of the GOP. Mormon women, for instance, are less Republican (67%) and more Democratic (22%) than Mormon men (81% Republican vs. 12% Democratic). Mormons who live in the West are somewhat more Republican (77%) than Mormons from other regions of the country (66%). Mormons under the age of 50 are more strongly Republican (80%) than Mormons over 50 (68%). (By contrast, there is little difference in the partisanship of those under 50 and those age 50 and older in the general population.) And Mormons who exhibit the highest levels of religious commitment express more support for the GOP (78%) than Mormons with lower levels of religious commitment (63%). 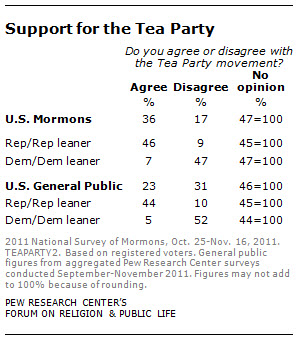 Perceptions of Parties’ Friendliness Toward Mormonism 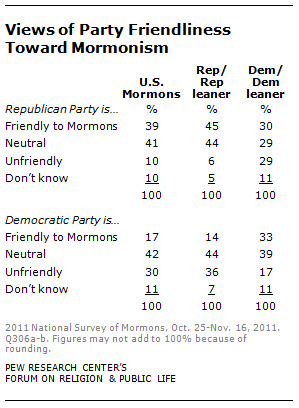 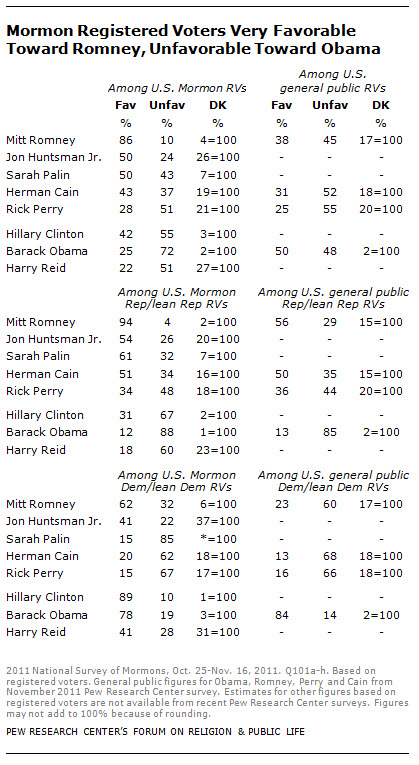 The survey, which was conducted from late October through mid-November 2011, asked respondents about their views of eight prominent political leaders, including five Republicans and three Democrats. Among the Republicans asked about, Mormons express overwhelmingly positive views of Mitt Romney, with 86% of registered voters saying they have a favorable view of Romney compared with only 10% who have an unfavorable view. Romney is viewed most favorably by Mormon Republicans (94%), but he also is seen in a positive light by Mormon Democrats (62% favorable). In fact, Mormon Democrats view Romney as favorably as do Republicans in the general population (56% favorable).

Former Utah Governor Jon Huntsman Jr. – another candidate for the GOP presidential nomination who is Mormon – is viewed favorably by half of Mormon registered voters (50%), while 24% view him unfavorably and 26% are unable to rate Huntsman or offer no opinion. Huntsman’s favorability ratings are higher among Mormons in the West (55%) than among those in other parts of the country (40%), where he is less familiar to Mormons (36% of those living outside the West are unable to rate Huntsman, compared with 22% of those residing in the West). Among Mormons residing in Utah, 70% express a favorable view of Huntsman and only 4% are unable to give him a rating.

Sarah Palin is rated favorably by half of Mormon voters, and Herman Cain – who was Romney’s main challenger for front-runner status at the time the survey was conducted – is rated favorably by 43% of Mormons. Of the Republicans asked about, Rick Perry received the most negative ratings from Mormons, with half (51%) viewing him unfavorably compared with 28% who view him favorably.

Barack Obama is viewed favorably by 25% of Mormon registered voters, while 72% say they have an unfavorable view of the president. Obama’s relatively low rating among Mormons (his favorability rating was 50% among the general public at the time the survey of Mormons was conducted) largely reflects the high rates of Republicanism among the Mormon population. Among Mormon Democrats, 78% give Obama a favorable rating, as do 84% of Democrats in the general population.

More Mormons have a favorable view of Secretary of State Hillary Clinton (42%) than of Barack Obama. Mormon women are more favorably disposed toward Clinton than are Mormon men (48% favorable among women vs. 35% among men). Half of Mormon registered voters (51%) express an unfavorable view of Nevada Democrat Harry Reid, a Mormon who is the majority leader of the U.S. Senate; 22% of Mormons rate Reid favorably, while 27% have no opinion. 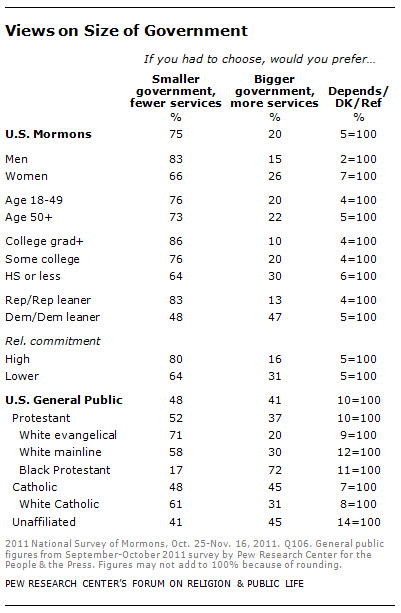 College graduates are most supportive of limited government (86%), followed by those with some college (76%) and then by those with a high school education or less (64%). There are no differences on this question among Mormons from different age cohorts.

Mormons are divided on the question of whether immigrants strengthen the U.S. because of their hard work and talents (45%) or burden the country by taking American jobs, housing and health care (41%). On this issue, the views of Mormons line up very closely with the views of the general public (45% strengthen, 44% burden). Mormons are much more likely than evangelical Protestants to say that immigrants strengthen rather than burden the United States (45% vs. 27% among white evangelicals). 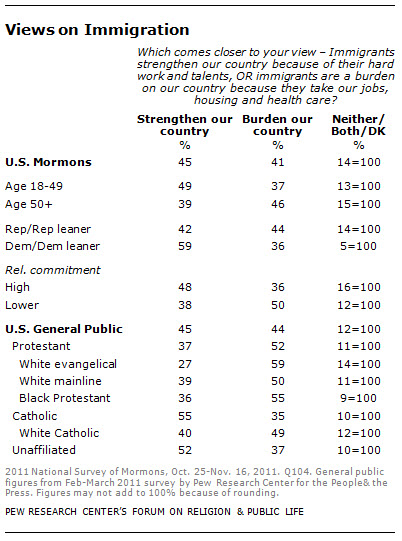 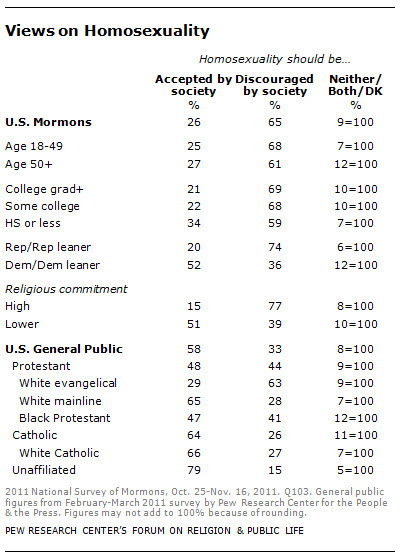 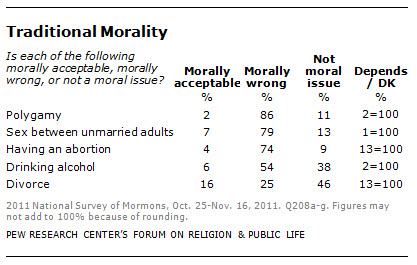 Mormons take conservative positions on the morality of various behaviors, including having sex outside of marriage (which 79% say is morally wrong), having an abortion (74% morally wrong) and drinking alcohol (54% morally wrong). The view that these activities are morally wrong is far more common among Mormons than among the general public. 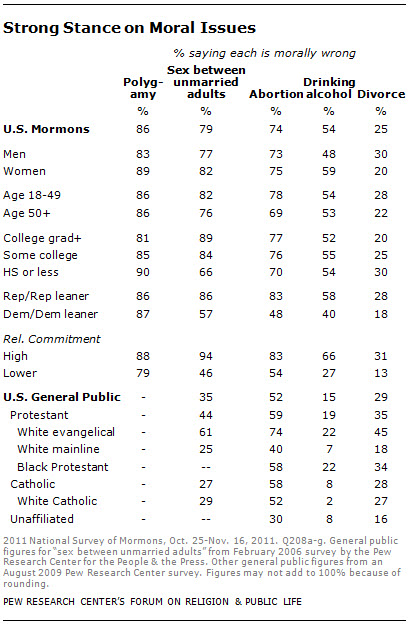 More Mormon women than men say that drinking alcohol is morally wrong (59% vs. 48%). Men, on the other hand, see divorce as more morally problematic than women do (30% vs. 20%). Differences between the sexes are negligible on other moral issues.

Mormons with the highest levels of religious commitment consistently express more morally stringent views than those with lower levels of commitment. This includes the question of polygamy, which is seen as morally wrong by 88% of those with high religious commitment and 79% of those with lower levels of commitment. On most issues, Republicans are more strict than Democrats. The exception is polygamy, which is viewed as morally problematic by equally large majorities of both groups (86% of Republicans, 87% of Democrats).