GOP gains are seen among both younger and older voters. Among the population as a whole, roughly half of voters under age 30 (52%) express support for the Democrats. This is a significant decline from 2008 when fully 60% of this group identified with or leaned toward the Democratic Party. The Democrats’ 28-point advantage among the under-30 cohort has fallen to a 14-point advantage. Among voters age 30 and older, the Democrats 10-point advantage in 2008 has shrunk to two points as of 2011. 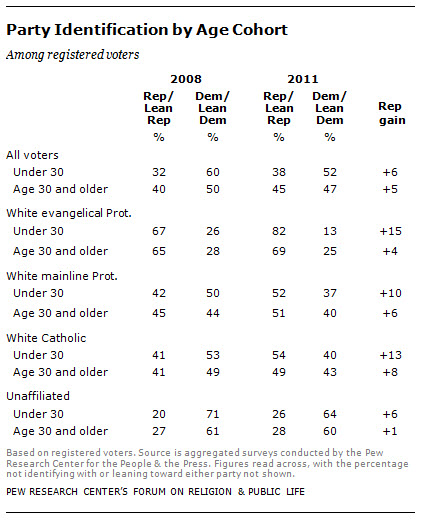 has been at least as large – if not more pronounced – among those under 30 as among those age 30 and older.

Next: Sample Sizes and Margins of Error Next Page → ← Prev Page

Religion and the Political Parties