Religion and the 2012 Nevada Republican Caucuses

Mitt Romney’s strong win in the 2012 Nevada Republican caucuses included overwhelming support from Mormons and strong support from Catholic voters, according to results from the National Election Pool entrance poll. Romney also was the winner among white born-again/evangelical Protestants, making Nevada the second state (the other was New Hampshire) in which he has been victorious among evangelicals in the 2012 primary season. Romney’s support among evangelicals, however, continues to be somewhat more tepid than among non-evangelicals. 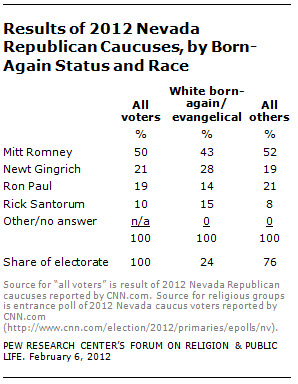 Romney was also victorious in the 2008 Nevada Republican caucuses, receiving 51% of the vote. Then as now, Romney’s support among evangelical voters was more tepid than among non-evangelicals. Among white evangelicals, 37% voted for Romney in 2008 while 23% supported Mike Huckabee, 14% preferred Paul and 11% voted for Fred Thompson. Romney’s support was significantly stronger among non-evangelical voters in 2008; 54% voted for him while 15% supported John McCain, Romney’s closest competitor among this group. 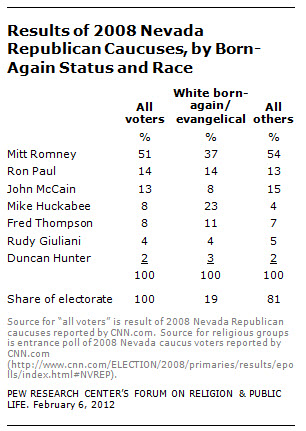 Mormons accounted for one-quarter of the electorate in the Nevada Republican caucuses, and nearly nine-in-ten of them (88%) voted for Romney. Romney was also the clear winner among Catholics, receiving 48% of their vote. Romney and Gingrich received roughly equivalent levels of support from Protestants and other Christians in Nevada, with each candidate receiving about one-third of the groups’ votes.1 Among the 8% of Nevada voters who are religiously unaffiliated, Paul was the clear winner with 54% support. Romney earned 24% support from the religiously unaffiliated, while 16% of this group voted for Gingrich and 5% supported Santorum. 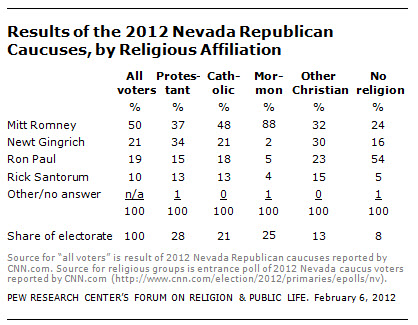 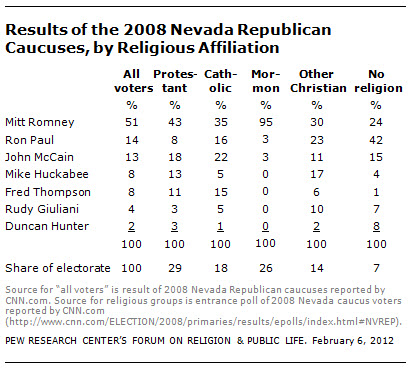 1 The results for the “Protestant” category reported here cannot be directly compared with the results for “Protestants” from the New Hampshire, South Carolina or Florida Republican primaries. In those states, the “Protestant” category as reported on CNN.com includes self-identified Protestants as well as Mormons (who make up a relatively small share of the population in New Hampshire, South Carolina and Florida compared with Nevada) and other Christians. (return to text)