Religion and the 2012 Republican Primaries: Arizona and Michigan

Mitt Romney won the Arizona Republican primary by a large margin and secured a narrow victory in the Michigan Republican primary. In both states, Romney’s support among born-again/evangelical voters was weaker than among non-evangelicals, continuing the pattern from previous primaries and caucuses in other states. Rick Santorum, who finished second in both Arizona and Michigan, received his strongest support from evangelicals and from voters who said it matters a “great deal” to them that a candidate shares their religious beliefs, according to results from the National Election Pool exit polls.

In Michigan, 39% of the GOP electorate was comprised of white evangelical Protestants. Santorum was the clear winner of the evangelical vote, receiving 51% support from this group, compared with 35% for Romney.1 The balance of opinion was reversed among non-evangelical voters in Michigan, with 45% voting for Romney and 30% supporting Santorum. Ron Paul and Newt Gingrich each finished far behind Romney and Santorum among both groups of Michigan GOP voters. 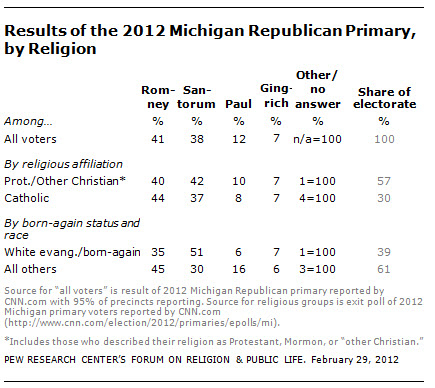 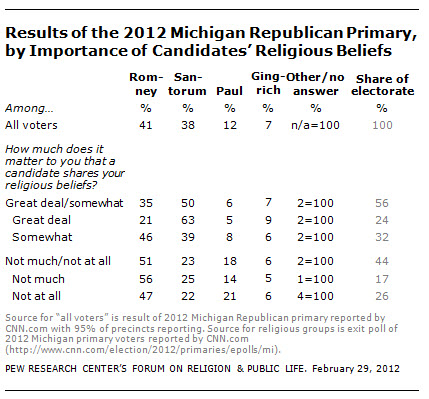 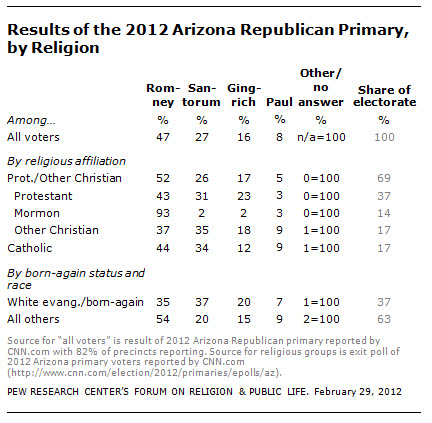 Romney was the clear choice of Protestants in Arizona, defeating Santorum by a 52% to 26% margin. Romney’s victory among Protestants included overwhelming support from Arizona’s large Mormon population; Mormons accounted for 14% of the Arizona electorate, and 93% of them cast their ballots for Romney.2 Among Arizona Catholics, 44% voted for Romney and 34% voted for Santorum.

In Arizona, Santorum’s strongest support came from voters who attached a great deal of importance to candidates’ religious beliefs; he secured 44% of their votes. Among all other Arizona voters, however – including those who said it is “somewhat” important to them that a candidate shares their religious beliefs – Romney was the clear winner. 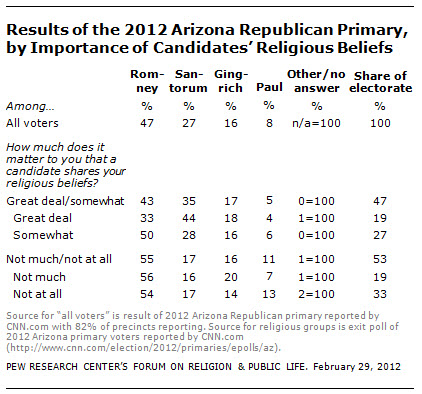 This analysis is based on the exit poll data that were available as of 11:00 a.m. on Feb. 29. Exit poll data are sometimes reweighted, so some figures may be different from those available on CNN.com.

2 In most exit polls, respondents can elect to describe their religion as Protestant, Catholic, Mormon, other Christian, another non-Christian faith, or no religion. In most states (including Michigan), the Protestant, Mormon and other Christian groups are combined into a single “Protestant” category for reporting purposes. In states with large Mormon populations (including Arizona), however, these three groups are reported both separately as independent categories and combined into a single “Protestant” category. (return to text)