Religion and the 2012 Republican Primaries: Alabama and Mississippi

Rick Santorum won narrow victories in both the Alabama and Mississippi Republican primaries on Tuesday.1 Exit polling shows there was no clear winner among white born-again/evangelical voters in either state, with Santorum and Newt Gingrich receiving roughly equivalent levels of support from evangelicals in both states.

Santorum was the preferred choice of voters in Alabama who say it matters a great deal to them that a candidate shares their religious beliefs. There was no clear winner among this group in Mississippi. 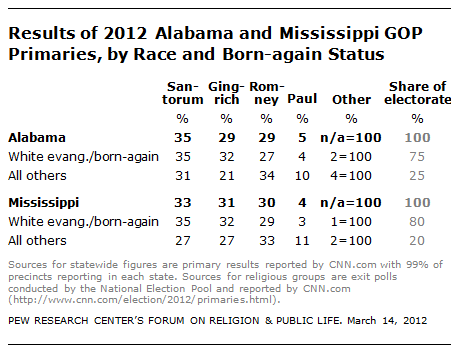 Santorum was the clear favorite of Alabama voters who said it matters “a great deal” or “somewhat” to have a candidate who shares their religious beliefs. He received the votes of 41% of this group in Alabama, while Gingrich received 31% support and Romney garnered 23% support. In Mississippi, voters who said it is at least somewhat important that a candidate shares their religious beliefs were divided about evenly between Santorum (35%), Gingrich (31%) and Romney (30%). 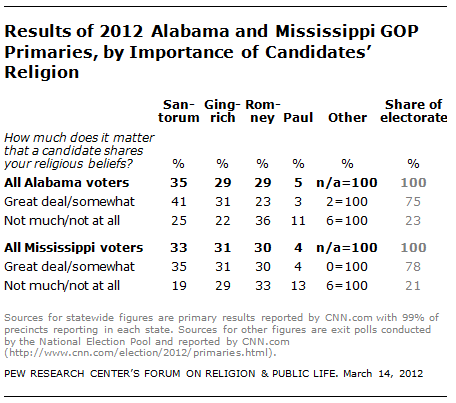 This analysis is based on exit poll data that were available as of 10:00 a.m. on March 14. Exit poll data are sometimes reweighted, so some figures may be different from those available on CNN.com.

1 No exit polling was conducted in Hawaii or American Samoa, where Romney won caucuses held on Tuesday, March 13. (return to text)

2 For analysis of religion in previous GOP caucuses and primaries, see “Synopsis of Religion in the Early Republican Primaries” and “Religion in the Super Tuesday Primaries.” (return to text)