This survey of prison chaplains was conducted from Sept. 21 through Dec. 23, 2011, among professional prison chaplains or religious services coordinators (the two titles are used interchangeably for the purposes of this report) working in prisons in all 50 states.20 Correctional authorities in each of the 50 states granted permission for the Pew Research Center’s Forum on Religion & Public Life to contact state prison chaplains and request their voluntary participation in the survey. The survey was also endorsed by the American Correctional Chaplains Association. A total of 730 interviews were completed by Web and paper questionnaire, a response rate of nearly 50%.

The target population for the survey was all paid prison chaplains in the 50 state prison systems across the United States. The Pew Forum contacted officials in each state’s department of corrections to request permission to conduct the survey and to obtain contact information for all professional chaplains currently employed in state prisons.21 Based on communications with each state’s board of corrections, the Pew Forum compiled a database of chaplains thought to be eligible for the study. The process of obtaining permission to conduct the study and assembling the list of eligible chaplains was facilitated by the American Correctional Chaplains Association and by some chaplains with access to the National Correctional Chaplains Administrators Directory. A total of 1,474 state prison chaplains and religious services coordinators from the 50 state correctional systems comprised the total target population of interest.

The administration and data coding of the survey was handled by Social Science Research Solutions (SSRS). Attempts were made to contact all 1,474 state prison chaplains to request participation in the survey. In keeping with best practices for survey research, the target sample was contacted multiple times to request participation. The schedule of contacts was as follows:

The layout and design of the questionnaire sought to maximize comparability across the mixed modes of Web and paper questionnaires while following the best practices of visual survey design.24 The Web survey included programming for all skip patterns and follow up prompts on questions 8, 9 and 22 if the initial responses did not appear to match the question instructions.

Question order and response order was fixed for all questions in order to increase the comparability of the online and paper survey modes. This departs from typical practice in Web surveys (and telephone surveys) where the order of response options and questions (especially in serial lists of questions) is sometimes randomized. The purpose of randomizing order is to control for potential primacy and recency effects in response option order and for serial item position effects in question order. Those sorts of randomization are not practical for paper questionnaires, however. The fixed question order should be kept in mind when interpreting the survey results.

Response Rate and Margin of Error 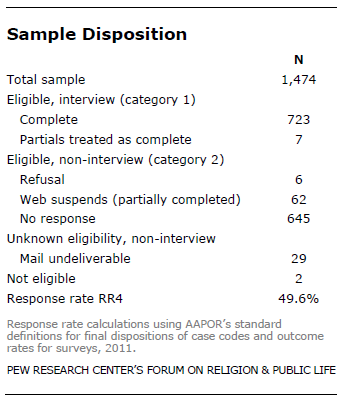 The total response rate was 49.6%.25 The table provides the full disposition of the target sample for the survey.

We attempted to ask all eligible state prison chaplains to complete this survey. Based
on a comparison of chaplains who responded promptly to the survey and those who were more difficult to interview, as well as an analysis of response by region, we are assuming that the responses constitute a probability sample of the population.

Based on that assumption, the margin of error for the full sample of 730 respondents from a population of 1,474 professional prison chaplains is plus or minus 2.6 percentage points. In addition to sampling error, one should bear in mind that question wording and practical difficulties in conducting surveys can introduce error or bias in the findings of opinion polls.

20 In South Dakota, religious programs are administered by a “cultural activities coordinator.” (return to text)

21 The Pew Forum also sought permission to include federal prison chaplains in the survey, but the Federal Bureau of Prisons decided not to allow its approximately 250 chaplains to participate. (return to text)

23 An email address was available for 857 of the 1,474 chaplains eligible to participate in the survey. (return to text)

26 Other kinds of surveys can be designed to represent organizations or institutions such as correctional facilities in proportion to their size in the population. Such surveys provide estimates about characteristics of the organizations, themselves, such as the prevalence of facilities at each security level or the number of facilities serving particular kinds of inmates. (return to text);

Next: Appendix C: The State and Federal Correctional System Next Page → ← Prev Page