All of the 730 survey respondents work as professional prison chaplains or religious services coordinators in state prisons, including privately run prisons that operate under state contracts. Their workplace environs vary, with most serving in facilities designed for male inmates and housing an average of about 2,000 inmates (mean = 1,965 inmates). The chaplains are a well-educated group, with a majority holding graduate degrees in religion-related fields. About seven-in-ten identify themselves as Protestants (71%), and 44% say their denomination belongs to the evangelical Protestant tradition. Generally speaking, the chaplains indicate that they hold theologically conservative views when it comes to their religion. A majority say their social and political views are conservative as well.

Chaplains serve in a wide range of settings. Most of those surveyed work in a single correctional facility, although a quarter (25%) divide their time across multiple facilities.
About eight-in-ten report that they are employed directly by a state correctional system (81%). Other arrangements include working as a contractor (8%), working for a private prison management firm (5%) or working through a religious organization (5%).

As expected from the composition of the U.S. prison system, most chaplains (81%) say they work exclusively with male inmates.15 Most also work in a rural setting (66%). About half of chaplains identify their workplace as a medium-security facility (49%) while one-third are employed in maximum-security institutions (33%) and the remainder work in minimum-security prisons (13%) or did not specify a security level (5%).16

About half of the chaplains surveyed (53%) have 10 or fewer years on the job in the state prison system, 34% have between 11 and 20 years of service and 12% have worked as prison chaplains for more than 20 years. The average tenure is 11.3 years. 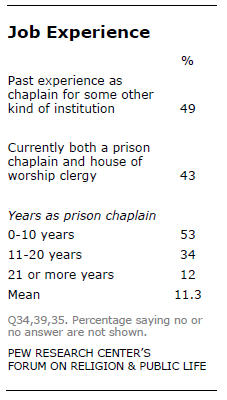 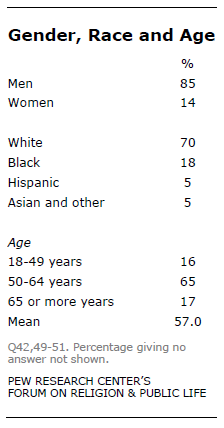 Seven-in-ten (70%) of the chaplains surveyed are non-Hispanic whites, 18% are black, 5% are Hispanic and 5% are Asian or some other race, and 2% did not specify.

About half (49%) previously have worked as a chaplain or religious services coordinator in some other institutional setting, such as the military or a hospital. And about four-in-ten (43%) of the prison chaplains currently hold a second position as a minister, pastor, rabbi or imam in a house of worship outside the prison walls. 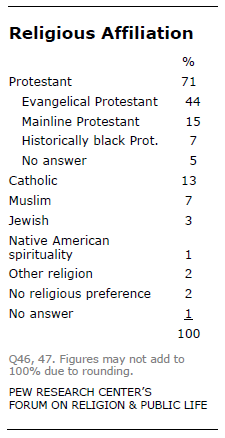 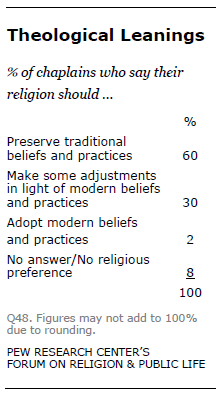 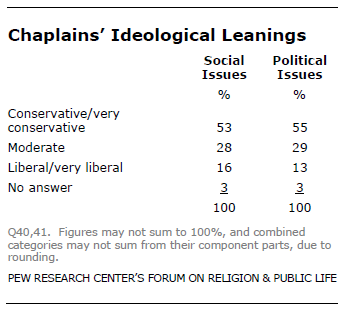 Evangelical chaplains are more likely than those of other Protestant traditions or faiths to believe in preserving traditional beliefs and practices; 71% of evangelical Protestant chaplains believe religious tradition should be preserved, and 26% take a middle-ground position on religious tradition. Mainline Protestant chaplains, by comparison, are more evenly divided between those who think that traditional beliefs and practices should be preserved (45%) and those who favor some adjustments (46%).

As expected, the prison chaplains surveyed are a well-educated group. About six-in-ten (62%) hold either a master’s degree or a doctorate, 21% hold a bachelor’s degree and 15% did not complete a four-year college degree. Nearly all of those with a graduate degree (90%) specialized in a religion or ministry-related field. Overall, 56% of the chaplains surveyed completed graduate studies in a religion or ministry-related field.

15 The state and federal prison population is predominately male (93%), according to the U.S. Bureau of Justice Statistics. See Appendix C: The State and Federal Correctional System. (return to text)

16 Inmates who pose the greatest threat to public safety typically reside in maximum-security prisons, which have the highest staff-to-inmate ratios, the closest monitoring of inmates and physical features such as reinforced fences, walls and armed watch towers. By contrast, inmates at minimum-security prisons generally pose the least risk to public safety, and these facilities typically have only single-perimeter fences and no roving patrols or armed watch towers. Medium-security prisons fall in the middle. (return to text)

Next: What Prison Chaplains Do … and What They Think They Should Do Next Page → ← Prev Page