Chaplains’ Views on the Correctional System

Prison chaplains are, on balance, positive about the correctional system. A majority says the system where they are employed “works pretty well,” and strong majorities rate the correctional system as excellent or good when it comes to maintaining order and meeting the religious needs of inmates. Evaluations of rehabilitation and re-entry efforts are less positive, 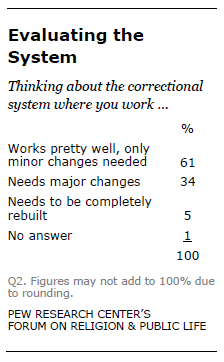 Most chaplains are upbeat about the correctional system where they work. About six-in-ten (61%) of those surveyed say their state’s system “works pretty well” and needs only minor changes, while a third (34%) say the system needs major changes and 5% say it needs to be completely re-built.

When it comes to specific aspects of the state correctional system’s performance, chaplains are most sanguine about the ability to maintain discipline and order in prison, and they are least positive about the efficacy of efforts to rehabilitate inmates and prepare them for re-entry into the community. Four-in-ten (40%) chaplains say the correctional system where they work is doing an excellent job at maintaining order and discipline among inmates, 54% say it is doing a good job, and just 6% say it is doing either fair or poor. 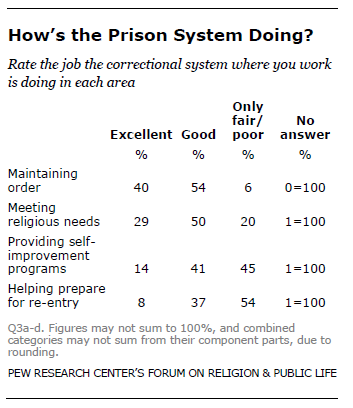 The correctional system is also seen as excellent (29%) or good (50%) at meeting the religious needs of inmates. Just a fifth of chaplains consider performance in this area to be only fair (17%) or poor (3%). A majority also says the system is excellent (14%) or good (41%) at providing self-improvement programs for inmates. But a majority of chaplains also say services to help inmates prepare to return to the community are only fair (37%) or poor (17%) in the system where they work; 37% say such services are good and 8% say they are excellent.

Financial pressures are widespread across many state-funded programs, including prison systems. There is near consensus among chaplains on several possible ways to cut costs. Nearly all chaplains either favor (46%) or strongly favor (46%) dealing with non-violent, first-time offenders through other kinds of sentences (such as community service or mandatory substance-abuse counseling) rather than prison terms. Just 8% of the chaplains surveyed oppose this idea. Nearly all the chaplains also favor (57%) or strongly favor (35%) allowing inmates to earn early release based on good behavior and completion of rehabilitation programs, while 7% are opposed. And most favor (53%) or strongly favor (33%) shortening prison sentences for non-violent crimes; 12% oppose this idea. 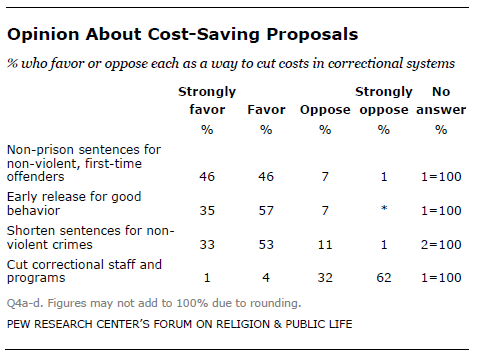 On the other hand, there is near-unanimity among chaplains against one idea: 94% oppose cutting correctional staff and programs in order to reduce costs in correctional systems (62% strongly oppose and 32% oppose this idea). 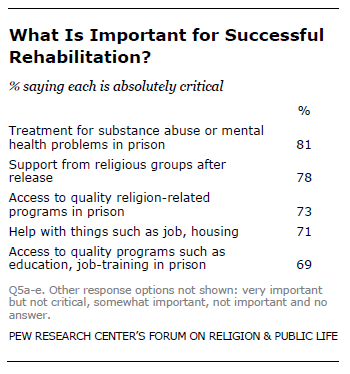 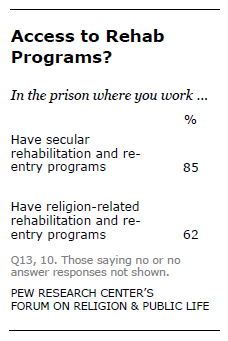 In the minds of the chaplains, successful rehabilitation and reintegration of inmates into society requires efforts both in prison and after release. Fully eight-in-ten (81%) chaplains say that treatment for substance abuse or mental health problems while serving time is “absolutely critical” for rehabilitation; 14% call this very important but not critical, and the remainder consider it either somewhat important or not important (or give no response). Chaplains, perhaps not surprisingly, are also likely to see religious programs as vital. More than three-quarters say that support from religious groups after release is absolutely critical for successful rehabilitation (78%); 19% say this is very important but not critical. And 73% of the chaplains surveyed consider access to high-quality religion-related programs while in prison absolutely critical to rehabilitation. A substantial majority (71%) of chaplains also say “help with things like getting a job and finding affordable housing upon release” is absolutely critical. And 69% say the same about inmates’ access to high-quality rehabilitation programs of a secular nature, such as continuing education and job training. 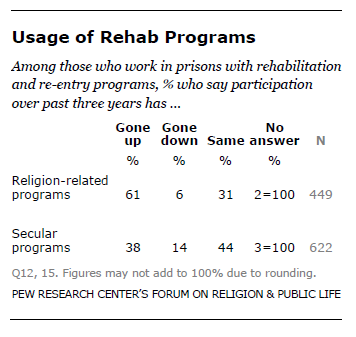 Perceptions of secular rehabilitation programs over the same period are a bit less sanguine. Among those with secular programs in the prisons where they work, about four-in-ten (38%) say usage has gone up over the past three years, 44% say usage is about the same and 14% say usage has gone down. Assessments of the quality of secular rehabilitation programs is similarly divided, with 36% saying the programs have gotten better, 43% saying the quality is about the same and 18% saying the programs have declined in quality. 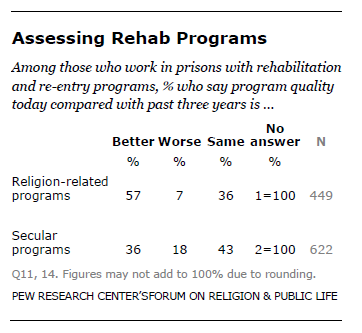 Assessment of the Second Chance Act

In 2007, Congress introduced and later passed the Second Chance Act, which provides federal funding for re-entry services in state prisons and local jails and juvenile facilities. About half of the chaplains surveyed report having heard either a lot or a little about the legislation (49%) while about half (51%) say they have heard nothing at all.

Among those who are aware of the Second Chance Act, 57% say it has been either very (8%) or somewhat effective (50%) in improving re-entry services and promoting the successful return of inmates to their communities; a third (33%) say it has been not too or not at all effective.

In Their Own Words:

Thoughts about Rehabilitation and the Prison System

Chaplains surveyed by the Pew Forum expressed a range of opinions about the state prison system and what they consider important for successful re-integration into the community. Here are a few of the verbatim comments provided in response to an open-ended request for other thoughts on issues raised in the survey.

On what it means to be a prison chaplain

Next: Appendix A: Survey Methodology Next Page → ← Prev Page