Mitt Romney secured a commanding victory in Tuesday’s Maryland Republican primary and a narrow win over Rick Santorum in the Wisconsin Republican primary.1 In both states, Romney and Santorum ran neck and neck among white born-again/evangelical voters, while Romney was the clear favorite of non-evangelical voters. Romney was also victorious among Wisconsin voters who attend religious services only occasionally and those who attach little importance to having a candidate who shares their religious beliefs.2 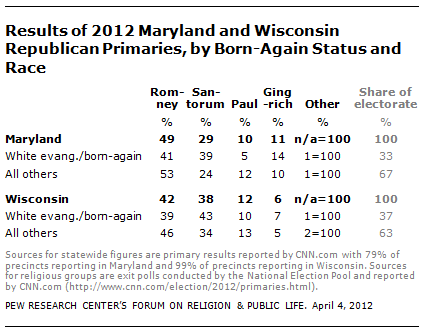 Protestant voters in Wisconsin were closely divided between Romney (43%) and Santorum (40%). Among Wisconsin Catholics, 47% voted for Romney and 35% backed Santorum.4

Romney and Santorum received roughly equivalent levels of support from Wisconsin voters who say they attend religious services on a weekly basis; 45% of this group voted for Santorum while 40% backed Romney. By contrast, Romney was the clear victor among Wisconsin voters who say they only occasionally attend religious services, receiving 49% of their votes compared with 28% for Santorum. 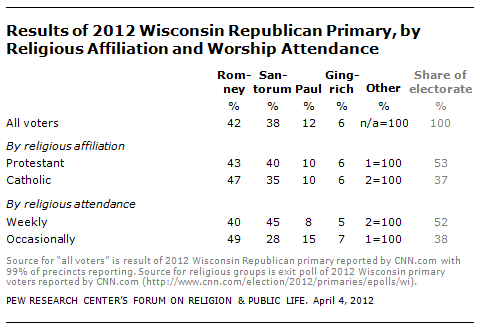 Romney was also victorious over Santorum among those saying a candidate’s religion matters “not much” or “not at all,” with 44% of this group voting for Romney and 29% backing Santorum.

This analysis is based on exit poll data that were available as of 8:00 a.m. on April 4. Exit poll data are sometimes reweighted, so some figures may be different from those available on CNN.com.

1 Romney also won the Washington, D.C. Republican primary on Tuesday, April 3, but the D.C. results are not analyzed in this report because no exit polling was conducted there. (return to text)

2 The Maryland exit poll did not include questions about religious affiliation, worship service attendance or the importance of having a candidate who shares one’s religious beliefs. (return to text)

3 Voters can describe themselves in exit polls as born-again or evangelical Christians regardless of their religious affiliation, meaning that the born-again/evangelical category likely includes not only Protestants but also some Catholics and even some voters who say they have “no religion.” (return to text)

4 The Wisconsin exit poll included too few interviews to permit analysis of voters from religious traditions other than Protestantism and Catholicism. (return to text)