The latest Pew Research Center American Values study finds that the United States continues to be a highly religious nation. Two-thirds of the public (67%) agrees with each of a series of three religious statements, affirming that prayer is an important part of their daily life, that “we will all be called before God at the Judgment Day” and that they never doubt the existence of God. When the first values study was conducted in 1987, a virtually identical number (68%) agreed with all three of these statements. 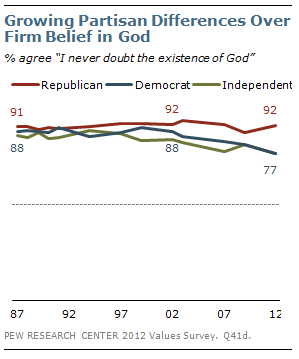 Religion and the Presidential Vote: A Tale of Two Gaps