Americans Continue To Be Wary of Church Involvement in Partisan Politics

A July 2012 Pew Research Center survey asked American adults whether they think churches and other houses of worship should come out in favor of one candidate over another during political elections. Two-thirds said they should not. For more on this question and related issues, see “Little Voter Discomfort with Romney’s Mormon Religion: Only About Half Identify Obama as Christian” (July 26, 2012).

Also see the Pew Forum’s 2012 guide to IRS rules on political activity by religious organizations, “Preaching Politics From the Pulpit.” Since 1954, the IRS has imposed limits on the political activities of tax-exempt organizations, including churches and other religious institutions. Some religious leaders defend the IRS rules, saying they prevent churches from getting too deeply involved in partisan politics. Others see the rules as an abridgement of free speech. For example, on Sunday, Oct. 7, the Christian advocacy group Alliance Defending Freedom (formerly the Alliance Defense Fund) will sponsor Pulpit Freedom Sunday, an annual event to promote “the inherent right of America’s pastors to choose and deliver the content of their sermons without fearing that the IRS will investigate or punish the church because of something a pastor says from the pulpit.” 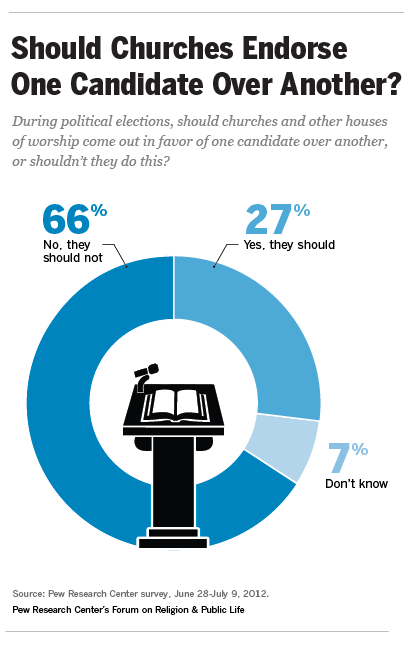