Laws Penalizing Blasphemy, Apostasy and Defamation of Religion are Widespread

Several recent incidents have drawn international attention to laws and policies prohibiting blasphemy – remarks or actions considered to be contemptuous of God or the divine. In a highly publicized case last summer, for example, a 14-year-old Christian girl in Pakistan was arrested and detained for several weeks after she was accused of burning pages from the Quran.1 In neighboring India, a man reputed to be a religious skeptic is facing blasphemy charges because he claimed a statue of Jesus venerated by Mumbai’s Catholic community for its miraculous qualities is a fake.2 The man reportedly is staying in Europe to avoid prosecution.3 In Greece, a man was arrested and charged with blasphemy after he posted satirical references to an Orthodox Christian monk on Facebook.4 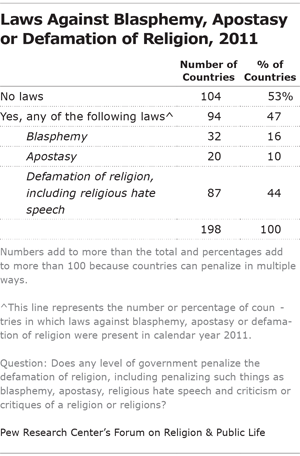 Pakistan, India and Greece are not alone in actively pursuing blasphemy prosecutions. A new analysis by the Pew Research Center’s Forum on Religion & Public Life finds that as of 2011 nearly half of the countries and territories in the world (47%) have laws or policies that penalize blasphemy, apostasy (abandoning one’s faith) or defamation (disparagement or criticism of particular religions or religion in general). Of the 198 countries studied, 32 (16%) have anti-blasphemy laws, 20 (10%) have laws penalizing apostasy and 87 (44%) have laws against the defamation of religion, including hate speech against members of religious groups.

As an extension of its continuing research on restrictions on religion around the world, the Pew Forum counted and categorized (“coded”) reports of the presence of these laws in 2011.5 The coding relied on 19 widely cited, publicly available sources from groups such as the U.S. State Department, the United Nations, Human Rights Watch, Amnesty International and the International Crisis Group.6 Although it is possible that more laws penalizing blasphemy, apostasy or defamation of religion exist than are reported by the 19 primary sources, taken together the sources are sufficiently comprehensive to provide a good estimate of the presence of these laws in almost all countries.7

This is the second time the Pew Forum has analyzed laws against blasphemy, apostasy and defamation of religion as part of its ongoing study of global restrictions on religion.8 However, the original study, which covered the period from mid-2006 to mid-2009, looked only at the number of countries that had laws against blasphemy, apostasy or defamation; it did not look at each type of law separately. In addition, the first study did not include hate speech laws. By contrast, this analysis uses a broader definition of defamation that includes laws against hate speech aimed at religious groups. Laws against the defamation of religion and religious hate speech overlap to some extent, but, in general, defamation refers to the disparagement or criticism of a religion while hate speech refers to words or actions that vilify, disparage or intimidate a person or group based on religion. 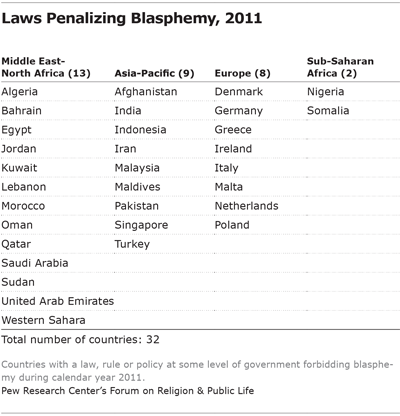 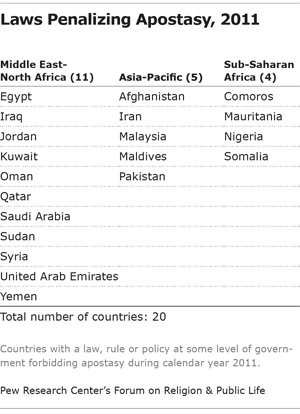 In 2011, a total of 20 countries across the globe prohibited apostasy (abandoning one’s faith, including by converting to another religion). Such measures were in effect in more than half the countries in the Middle East-North Africa region (11 of 20, or 55%) as well as in five of the 50 countries in the Asia-Pacific region (10%) and four of the 48 countries in sub-Saharan Africa (8%). Laws against apostasy were not present in any country in Europe or the Americas.

In the three other major geographic regions covered in this analysis, a third or fewer countries had laws against the defamation of religion, including religious hate speech. Such laws were found in 17 of the 50 countries in the Asia-Pacific region (34%), 13 of the 48 countries in sub-Saharan Africa (27%) and six of the 35 countries in the Americas (17%), including Brazil and Canada. 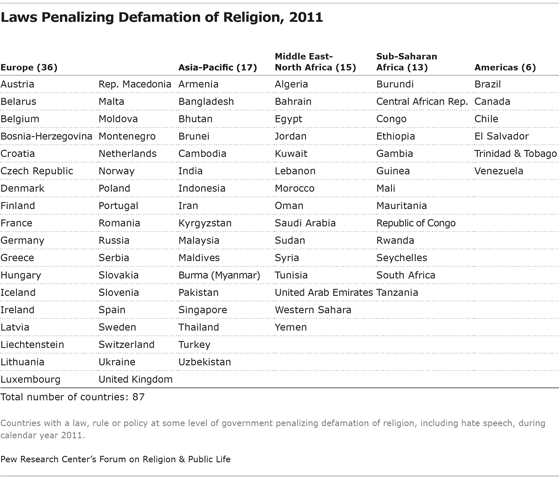 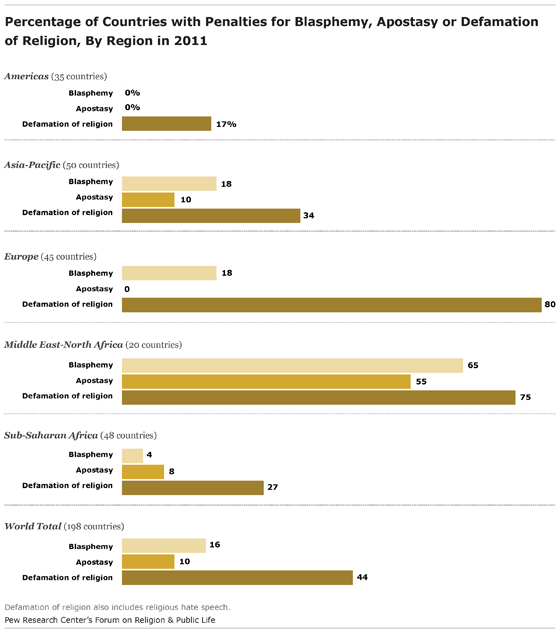 1 The girl was released after an imam at a local mosque was accused of planting evidence against her. See “Bail Allowed for Christian Girl Accused of Blasphemy in Pakistan,” The Washington Post, Sept. 7, 2012, http://www.washingtonpost.com/world/asia_pacific/bail-allowed-for-christian-girl-accused-of-blasphemy-in-pakistan/2012/09/07/abcc51be-f8d7-11e1-a073-78d05495927c_story.html. On Nov. 20, 2012, a Pakistani court ordered all charges against the girl dropped. See “High Court Rejects Case Against Girl in Pakistan,” The New York Times, Nov. 20, 2012, http://www.nytimes.com/2012/11/21/world/asia/pakistan-court-orders-blasphemy-charges-against-christian-girl-dropped.html. (return to text)

5 The Pew Forum’s latest findings on global restrictions on religion can be found in its September 2012 report “Rising Tide of Restrictions on Religion,” https://www.pewforum.org/Government/Rising-Tide-of-Restrictions-on-Religion.aspx. (return to text)

6 For a full list of sources, see Appendix 1: Methodology of “Rising Tide of Restrictions on Religion,” https://www.pewforum.org/Government/Rising-Tide-of-Restrictions-on-Religion-methodology.aspx#info. (return to text)

7 Although the sources used for this study did not indicate that the U.S. had blasphemy laws in 2011, several U.S. states, including Massachusetts, Michigan and Oklahoma, still had anti-blasphemy laws on the books. (return to text)

8 See the Laws Against Blasphemy, Apostasy and Defamation section of the Pew Forum’s 2011 report “Rising Restrictions on Religion,” https://www.pewforum.org/Government/Rising-Restrictions-on-Religion(6).aspx. (return to text)