There are about 14 million Jews around the world, representing 0.2% of the global population. This estimate is based on the number of people who self-identify as Jewish when asked about their religion on national censuses and large-scale surveys. However, the worldwide figure could be larger if a broader definition (such as having a Jewish grandparent) or smaller if a tighter definition (such as an unbroken line of matrilineal Jewish descent) were imposed.15

The main branches of Judaism in the United States include the Orthodox, Conservative, Reform and Reconstructionist movements. But it is difficult to estimate the size of these movements globally because they are not familiar or relevant to Jews in many other countries; in Israel and elsewhere, distinctions are often made between Haredi or Ultra-Orthodox Jews, Modern Orthodox Jews and less traditional forms of Judaism. 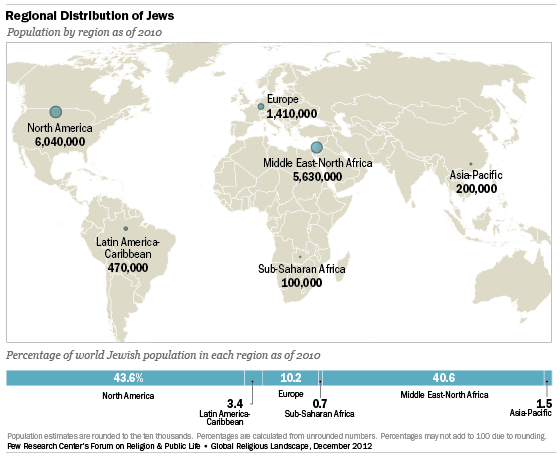 Geographically, Jews are concentrated primarily in North America (44%) and the Middle East- North Africa region (41%). The remainder of the global Jewish population is found in Europe (10%), Latin America and the Caribbean (3%), Asia and the Pacific (between 1% and 2%) and sub-Saharan Africa (less than 1%).

Jews make up roughly 2% of the total population in North America and a similar proportion in the Middle East-North Africa region. In the remaining regions, they comprise less than 1% of the overall population.

While Jews historically have been found all around the globe, Judaism is highly geographically concentrated today. More than four-fifths of all Jews live in just two countries, the United States (41%) and Israel (41%). The largest remaining shares of the global Jewish population are in Canada (about 3%), France (2%), the United Kingdom (2%), Germany (2%), Russia (2%) and Argentina (between 1% and 2%).

Israel is the only country with a Jewish majority (76%). 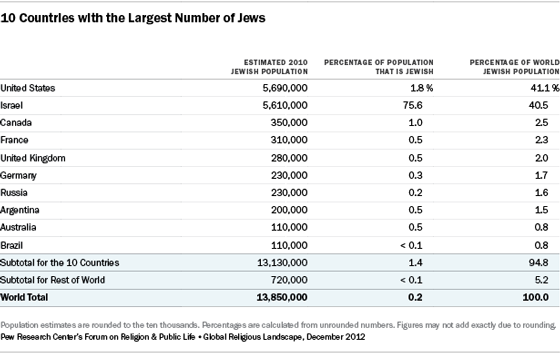 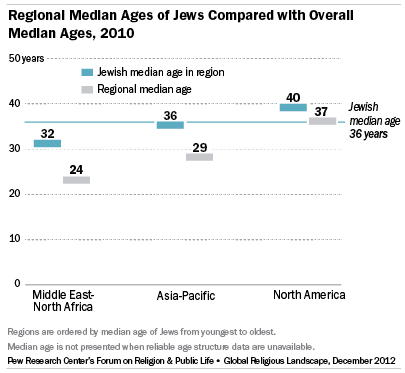 15 For more information on varying definitions of Jewishness and resulting population estimates, see DellaPergola, Sergio. 2011. “Jewish Demographic Policies: Population Trends and Options in Israel and the Diaspora.” The Jewish People Policy Institute, pages 21-25. His estimate of the “core” population of Jews around the world as of 2010 is slightly lower than the Pew Forum’s figure of 14 million. But he also estimates that there are 10-12 million people in the United States alone who would qualify for citizenship under Israel’s Law of Return, including the non-Jewish spouses of Jews as well as all the children and grandchildren of Jews. (return to text)

Next: About the Report Next Page → ← Prev Page