The Pew Research survey asked Americans a number of questions designed to explore basic attitudes toward aging in today’s world, including their views on the ideal life span and their opinions on the impact of the growing share of the U.S. population that is 65 and older. Survey interviewers asked respondents these questions before the concept of radical life extension was mentioned. The answers subsequently were analyzed to explore links that might help to explain respondents’ views on radical life extension.

Average life expectancy in the U.S. today is 78.7 years, according to the Centers for Disease Control and Prevention.7 Most Americans say they would like to live longer than that, but relatively few indicate that they would want to live for the prolonged time span associated with radical life extension.

Perhaps not surprisingly, people’s personal life span preferences are related to their views about radical life extension. People who say they would want to live past 100 are more inclined to personally want treatments to significantly extend their life. Similarly, those who prefer a longer life span are more likely than those who do not to believe radical life extension would be good for society. 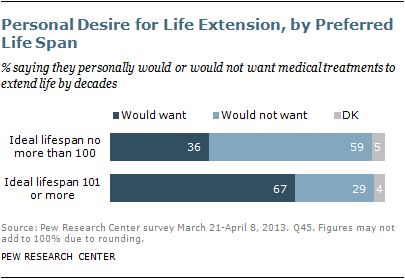 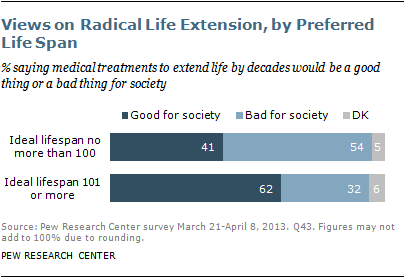 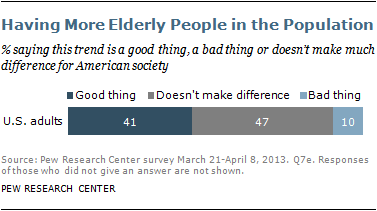 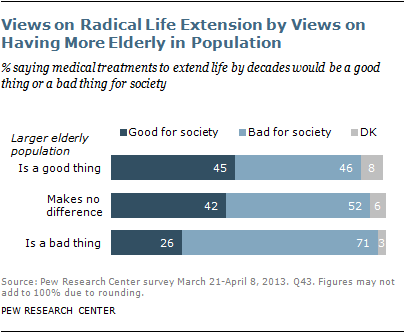 Overall, about four-in-ten U.S. adults (41%) consider the growing number of elderly people in the population to be a good thing for society. Just 10% say the aging population is a bad thing, and 47% say it does not make much difference.

However, views about the overall effect of having more elderly people in the population are not significantly related to personal preferences for getting radical life-extension treatments. 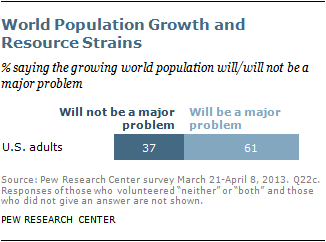 While relatively few U.S. adults think the growing elderly population is a bad thing for society, a majority of Americans have a pessimistic view about the effect of population growth on natural resources. About six-in-ten adults (61%) say the growing world population will be a major problem because there will not be enough food and resources to go around. Nearly four-in-ten (37%) take the view that growth will not be a major problem because the world will find a way to stretch its natural resources. 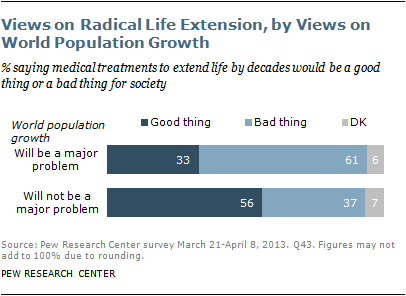 Perspectives about the impact of world population growth on natural resources are associated with views about the overall effect of radical life extension and, to a lesser degree, with personal preferences for getting life-extending treatments. For example, those who are pessimistic about the effects of population growth are more inclined to consider radical life extension a bad thing rather than a good thing for society, by a 61% to 33% margin. 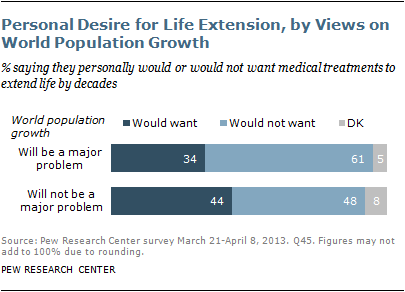 Next: Chapter 4: Views About Today’s Medical Treatments and Advances Next Page → ← Prev Page