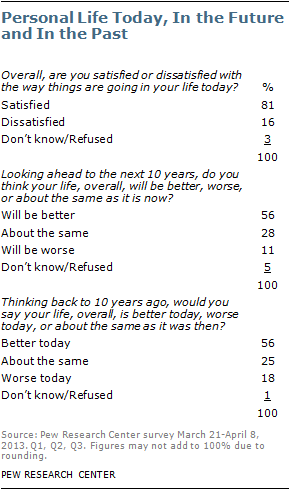 The Pew Research survey asked several questions about personal life satisfaction, which then were analyzed to explore links with respondents’ views on radical life extension. 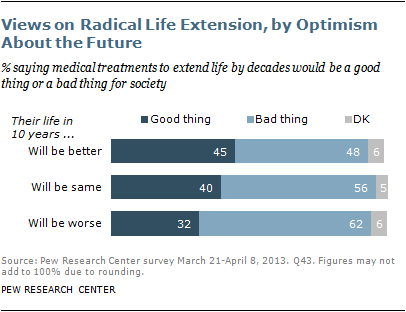 Optimism about the future is modestly related to beliefs about radical life extension. Those who expect their personal life to be better in 10 years than it is today are somewhat more inclined to say that radical life extension would be a positive development for society (45%), compared with those who expect their future lives to be worse (32%) than it is now. 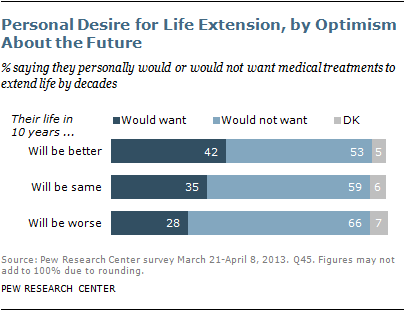 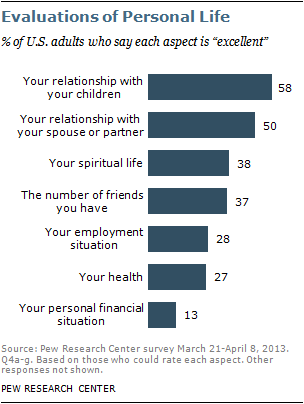 The Pew Research survey also asked respondents to rate a number of specific aspects of their personal lives. Familial relationships are the most highly rated: A majority of Americans rate their relationship with their children as excellent (58%), and half say the same about their relationship with their spouse or partner (50%).8 About four-in-ten U.S. adults rate their spiritual life as excellent (38%), and a similar portion say the same about the number of friends they have (37%). About three-in-ten consider their employment situation (28%) and health (27%) to be excellent. 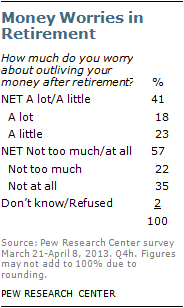 Fewer adults (13%) consider their personal financial situation to be excellent. Indeed, on a separate question about finances, about four-in-ten Americans (41%) say they worry about outliving their money after retirement.

However, worries about outliving one’s financial resources are not related to views about radical life extension, nor are ratings of other aspects of respondents’ personal lives, such as relationships with family and friends.

Next: Chapter 6: Radical Life Extension and Views on Other Life Issues Next Page → ← Prev Page