On a variety of measures, Jews are less religious than the general public. For example, roughly one-quarter of Jews say religion is very important in their lives, compared with more than half of Americans overall. Similarly, a quarter of Jews say they attend religious services at least once or twice a month, compared with 50% among the general population. A key exception to this pattern is Orthodox Jews, whose level of religious commitment matches or exceeds most other religious groups in the population.

Though many Jews say religion is not a very important part of their lives, participation in Jewish traditions remains quite common. Seven-in-ten Jews say they participated in a Seder last Passover, for instance. And over half of Jews – including about one-in-five Jews of no religion – say they fasted for all or part of Yom Kippur in 2012.

The data also make clear that American Jews have a broad view of their identities; being Jewish is as much about ethnicity and culture as it is about religious belief and practice. And many Jews defy easy categorization. Some Jews by religion are non-believers, while some Jews of no religion are ritually observant. Though Jewish identity is correlated with religious observance (Jews by religion are substantially more observant than Jews of no religion), the correspondence is not perfect. 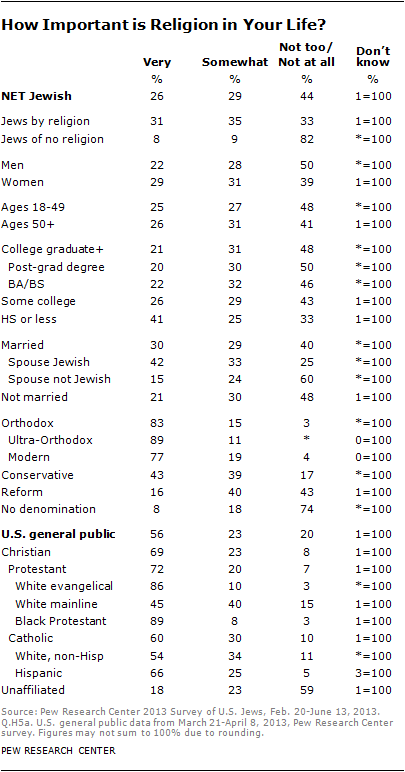 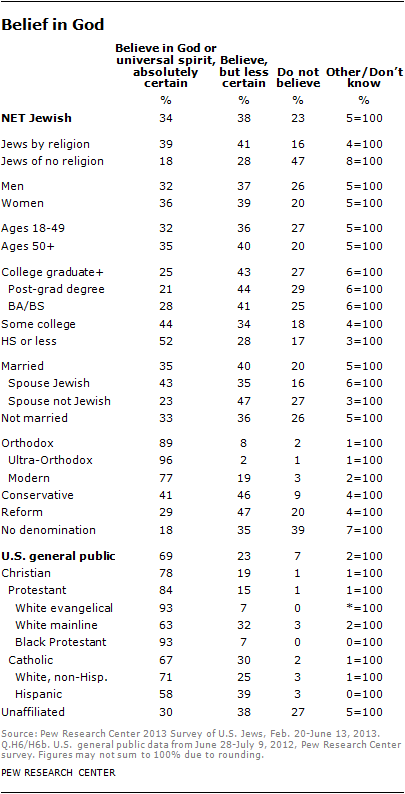 Though most Jews express some doubt about God’s existence, certainty about God is nearly universal among Orthodox Jews, 89% of whom say they are absolutely convinced of God’s existence. Far fewer Jews from other denominational backgrounds share this level of conviction. 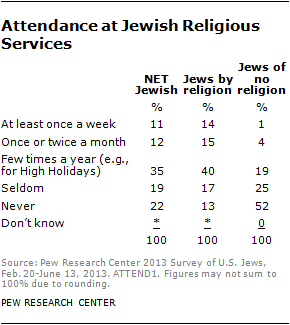 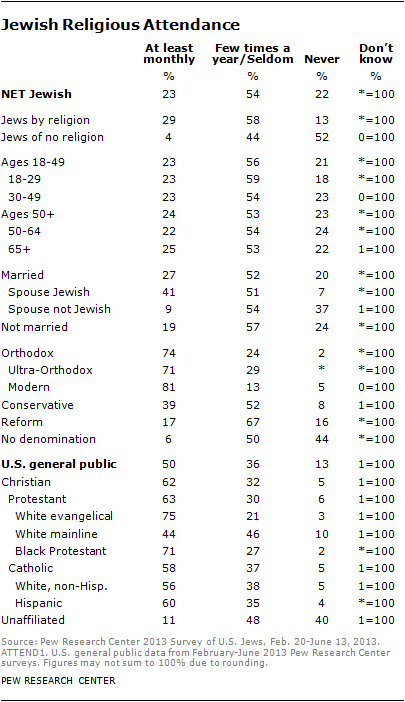 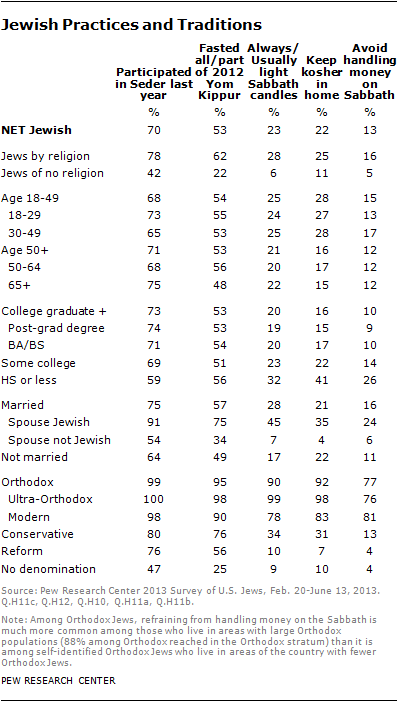 Regularly lighting candles to mark the start of the Sabbath is less common among Jews than participating in a Seder or fasting on Yom Kippur, as is keeping a kosher home. Nearly a quarter of Jews (23%) say they always or usually light Sabbath candles (down slightly from 28% in the 2000-2001 NJPS), and a similar number say they keep kosher in their home (22%).

As with other traditional practices, Orthodox Jews are much more likely than other Jews to say they regularly light Sabbath candles and keep kosher homes. Similarly, Jews married to a Jewish spouse perform these activities at much higher rates than intermarried Jews.

One-in-seven Jews say they avoid handling money on the Sabbath (13%). However, most Orthodox Jews continue to maintain this traditional Sabbath observance.

Combining Judaism and Other Faiths

About a third of Jews (32%) say they had a Christmas tree in their home last year, including 27% of Jews by religion and 51% of Jews of no religion. Erecting a Christmas tree is especially common among Jews who are married to non-Jews; 71% of this group says they put up a tree last year.

Attending non-Jewish religious services is an infrequent occurrence for U.S. Jews; just 15% say they do this at least a few times a year.