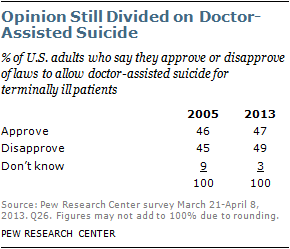 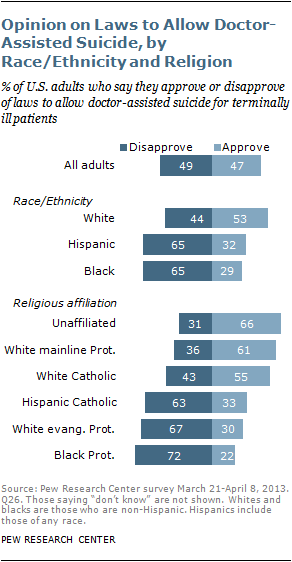 There are sizable differences in opinion about this issue by race, ethnicity and religion. More whites than blacks and Hispanics favor laws allowing doctor-assisted suicide.

There also are differences in opinion by education, political party, ideology and the amount of prior thought given to end-of-life issues.

Those with more formal education (at least some college) are more apt to approve of such laws than are those with less education.

Democrats and independents are more inclined than Republicans to approve of laws allowing doctors to assist terminally ill patients in committing suicide. Differences in opinion by political party are virtually unchanged since the 2005 Pew Research survey. There are also differences by political ideology, with conservatives less inclined than either moderates or liberals to approve of laws allowing physician-assisted suicide.

However, there are no significant differences in opinion about laws allowing physician-assisted suicide by gender or age. 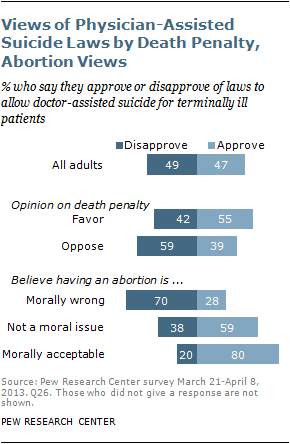 To what extent are opinions about doctor-assisted suicide consistent with beliefs about other issues that relate to life and death? To explore this question, the Pew Research survey also asked about views on capital punishment and abortion.

Next: Chapter 2: Views on the Morality of Suicide Next Page → ← Prev Page