The Pew Research survey finds some ambivalence in public views about proxy decision-making – that is, decisions made by someone other than the patient – in end-of-life treatment matters. On the one hand, a clear majority supports the idea of allowing a close family member to decide whether or not to continue medical treatment when a patient is unable to communicate his or her own wishes directly. On the other hand, a minority of the public would extend that kind of decision-making authority to parents of an infant with a life-threatening defect. Such patterns highlight the complex nature of opinion on these topics and the tendency for views to vary depending on the exact circumstances considered.

Americans strongly support letting close family members decide whether to continue medical treatment for a terminally ill loved one who is unable to communicate his or her own wishes. Fully 78% of U.S. adults say a family member should be allowed to make this decision, up slightly from 74% in 2005 and 71% in 1990.

There are few differences of opinion about such proxy decision-making across demographic groups. Majorities of men and women; younger and older adults; and whites, blacks and Hispanics support allowing a family member to make a decision on behalf of the patient in such circumstances. 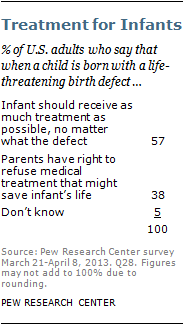 By contrast, public opinion is more mixed when it comes to the role of parents in making end-of-life treatment decisions for infants. About four-in-ten adults (38%) believe that parents should have the right to refuse medical treatment for an infant born with a life-threatening defect, while a 57% majority says infants in those circumstances should receive as much treatment as possible.

There also are sizable differences of opinion by race and ethnicity. Compared with blacks and Hispanics, more whites say that parents should have the right to refuse treatment on behalf of an infant with a life-threatening defect (43% among whites, 26% among blacks and 21% among Hispanics).

Views on this question do not differ by gender or age.

Previous Pew Research surveys asked a different question about proxy decision-making for infants and found a similar difference in public opinion based on whether the patient is an adult or an infant.14 In the 1990 survey, for example, about seven-in-ten adults (71%) said that the closest family member should be allowed to decide whether or not to continue medical treatment for an adult with a terminal disease who is unable to communicate his or her wishes. In 1990, there were no or only small differences in views about proxy decision-making for adult patients among religious groups. The balance of opinion was quite different when asked about proxy decision-making on behalf of a child. The question posed was: “When a severely handicapped child is born, do you think the parents have the right to refuse medical treatment that might save the infant’s life or do you think the infant, no matter how handicapped, should receive as much treatment as possible?” Only about a third (32%) of respondents in 1990 said parents should be able to refuse treatment on behalf of their child. Further, evangelical Christians (of any race or ethnicity) and those who said religion was very important in their lives were particularly likely to reject the idea of parents being allowed to refuse medical treatment on behalf of a child.

Next: Chapter 6: Aging and Quality of Life Next Page → ← Prev Page