Russians Return to Religion, But Not to Church 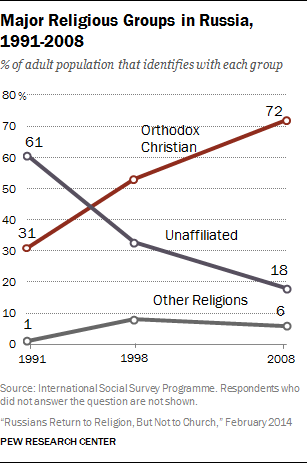 Over the past two decades, since the collapse of the Soviet Union, there has been an upsurge in affiliation with Orthodox Christianity in Russia.1 Between 1991 and 2008, the share of Russian adults identifying as Orthodox Christian rose from 31% to 72%, according to a new Pew Research Center analysis of three waves of data (1991, 1998 and 2008) from the International Social Survey Programme (ISSP) – a collaboration involving social scientists in about 50 countries. During the same period, the share of Russia’s population that does not identify with any religion dropped from 61% to 18%. The share of Russian adults identifying with other religions, including Islam, Protestant Christianity and Roman Catholicism, rose in the 1990s and then leveled off. (Estimates of the size of Russia’s Muslim population vary. The most recent ISSP survey finds that Muslims make up 5% of Russia’s population, but other surveys and studies have somewhat higher estimates. For more information, see “Sochi Olympics shine spotlight on Russia’s Muslim population.”) 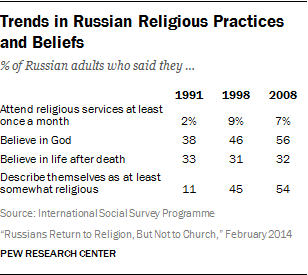 But for most Russians, the return to religion did not correspond with a return to church. Across all three waves of ISSP data, no more than about one-in-ten Russians said they attend religious services at least once a month. The share of regular attenders (monthly or more often) was 2% in 1991, 9% in 1998 and 7% in 2008. This suggests that although many more Russians now freely identify with the Orthodox Church or other religious groups, they may not be much more religiously observant than they were in the recent past, at least in terms of attendance at religious services.

For centuries, Orthodox Christianity was the dominant religion in Russia. This began to change in the early 20th century, following the 1917 Bolshevik Revolution and the imposition of state-sponsored atheism as part of communist ideology. During the Soviet period, many priests were imprisoned, many churches were converted to other uses or fell into disrepair, and people who publicly professed religious beliefs were denied prestigious jobs and admission to universities. While it is likely that some share of the population continued, in private, to identify with the Orthodox Church and other religious groups, it is impossible to measure the extent to which these attachments survived underground during the Soviet period and to what extent they faded away.

Similarly, it is difficult to disentangle the extent to which the upsurge in Orthodox affiliation found in the surveys represents an expression of long-held faith or a genuinely new wave of religious affiliation. It may be that after the fall of the U.S.S.R. in 1991, Russians felt freer to express the religious identities they had quietly maintained during the Soviet era.3 However, given that the share of Russians identifying with a religion rose almost as much between 1998 and 2008 as it did from 1991 to 1998, the data suggest that the change is not solely an immediate aftereffect of the collapse of the Soviet system. 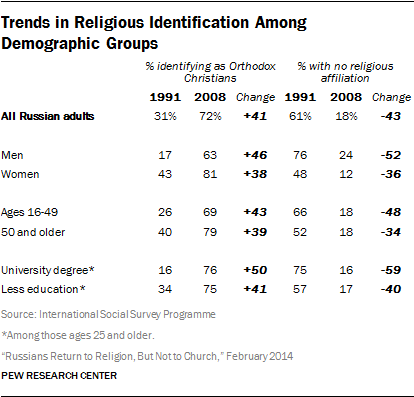 According to the ISSP, six-in-ten Russian adults (61%) surveyed in 1991 identified as religiously unaffiliated, while about a third said they were Orthodox Christians (31%). Over the next 17 years, those percentages virtually flipped. By 2008, roughly seven-in-ten Russians identified as Orthodox Christians (72%), while about one-in-five were religiously unaffiliated (18%). During the same period, there also was a modest increase in the share of the Russian public identifying with religions other than Orthodox Christianity, including Islam, Protestant Christianity and Roman Catholicism.4

Differences in the Religious Affiliation and Religious Commitment of Russians, by Demographic Group 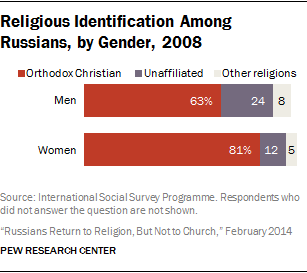 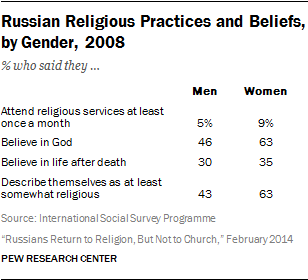 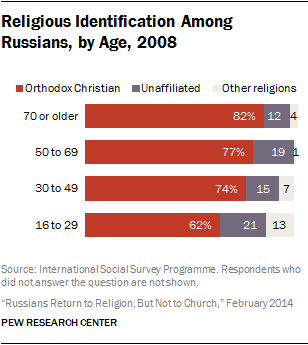 With a few exceptions, religious practices and beliefs did not differ widely by age group in Russia in 2008. However, Russians ages 70 and older were more likely than younger cohorts to say they believe in God and to describe themselves as at least somewhat religious. 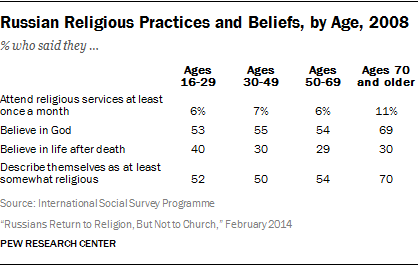 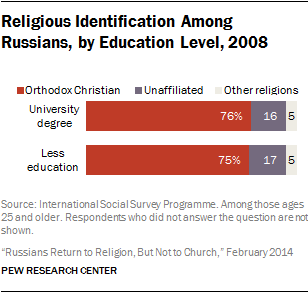 Religious commitment also did not vary much by education level, according to several measures, including frequency of attendance at religious services, belief in God and describing oneself as at least somewhat religious. The only measure on which education level made a significant difference was belief in life after death; Russians who have a university degree were slightly more likely than those with less education to say they believe in life after death. 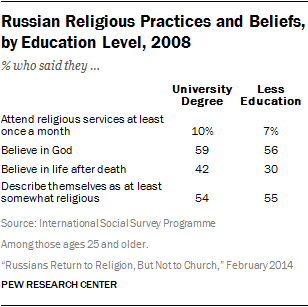 The data used in this report are from the International Social Survey Programme (ISSP), a consortium of researchers who conduct public surveys in about 50 countries according to international sampling standards with comparable questionnaires across countries. The ISSP includes many North American and European countries as well as a few nations in South America, Africa and Asia. The trends in this report go back to 1991, the year the USSR was formally dissolved and the ISSP conducted its first survey of religious beliefs and practices in Russia. Religion also was the focus of ISSP surveys in 1998 and 2008. This report is based on data from the ISSP Religion cumulative file. 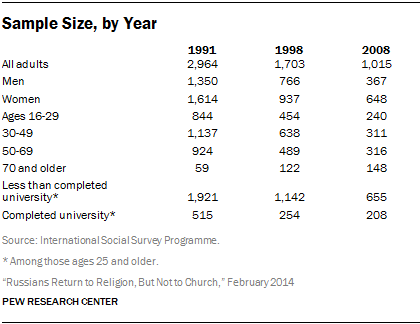 The surveys are probability samples that are geographically stratified and are nationally representative of the Russian adult population ages 16 years and older. Data were collected by self-administered questionnaire May 15-June 6, 1991; Sept. 5-26, 1998; and Jan. 2-26, 2008.6 Surveys were conducted in the Russian language. All survey estimates use weights provided by ISSP staff. Sample sizes for the total adult sample and subsamples are shown in the table above. Based on sample sizes and designs of the surveys, the margin of sampling error for results based on the total sample is roughly ±3.0% in 1991, ±3.3% in 1998 and ±4.4% in 2008, with larger margins of error for subgroups.

Full Results for Questions Used in the Analysis 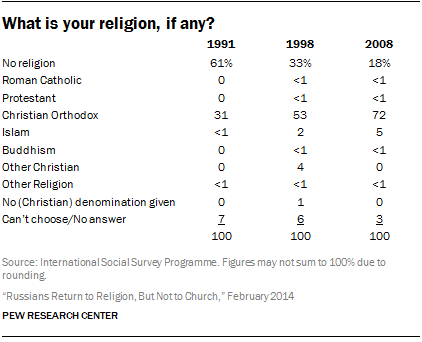 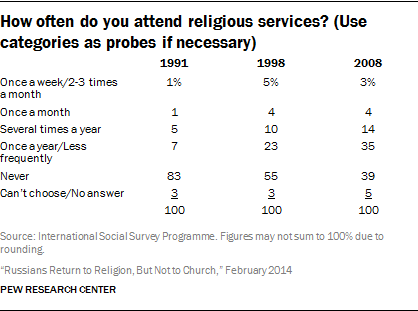 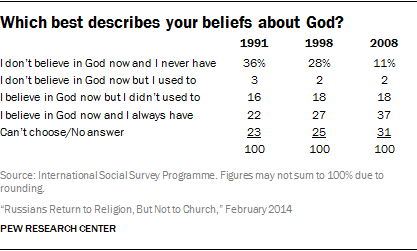 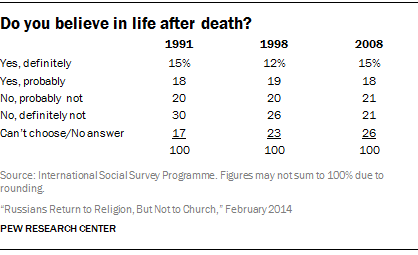 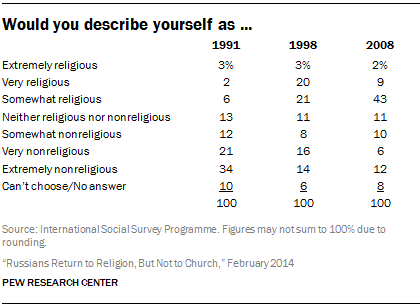