A Portrait of American Orthodox Jews

A Further Analysis of the 2013 Survey of U.S. Jews 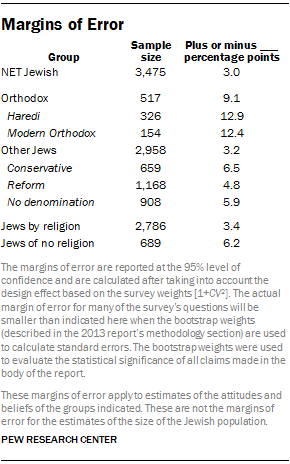 Pew Research Center completed interviews with 3,475 Jewish respondents, including 517 Orthodox Jews, 659 Conservative Jews, 1,168 Reform Jews and 908 Jews of no denomination. Interviews were conducted by telephone (landlines and cellphones) between Feb. 20 and June 13, 2013, by the research firm Abt SRBI, in English and Russian. After taking into account the complex sample design, the margin of error on the 3,475 completed interviews with the NET Jewish population is +/-3.0 percentage points at the 95% level of confidence. The table at right shows the unweighted sample sizes and the error attributable to sampling that would be expected at the 95% level of confidence for different groups in the survey. More information about the survey’s methodology can be found in the initial survey report’s appendix on methodology.

Pew Research Center is a nonpartisan “fact tank” that informs the public about the issues, attitudes and trends shaping America and the world. It does not take policy positions. It conducts public opinion polling, demographic research, media content analysis and other empirical social science research. The center studies U.S. politics and policy views; media and journalism; internet and technology; religion and public life; Hispanic trends; global attitudes; and U.S. social and demographic trends. The center is a nonprofit, tax-exempt 501(c)(3) organization and a subsidiary of The Pew Charitable Trusts, its primary funder. The 2013 survey U.S. Jews was made possible by The Pew Charitable Trusts, which received support for the project from the Neubauer Family Foundation. All of the center’s reports are available at www.pewresearch.org.