Chapter 4: Expectations of the Church

Many Catholics say the church should change its stance on key issues. In particular, they would like to see it expand eligibility for the priesthood, relax restrictions on the reception of Holy Communion and drop its ban on artificial birth control for family-planning purposes.

There is less consensus on whether these changes will happen within the next 35 years. While most Catholics say they think the church will change its teaching on the use of contraceptives by 2050, fewer than half believe that the Catholic Church will allow priests to marry or women to be ordained.

This chapter looks at Catholics’ support for changes in church teachings and policies, and their expectations for change. 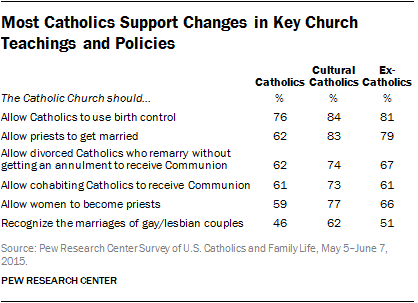 Among Catholics, the strongest aspiration for change in church teaching involves the ban on the use of contraceptives. About three-quarters (76%) of Catholics say the church should allow its adherents to use birth control.

Roughly six-in-ten Catholics say the church should allow priests to get married (62%) and women to become priests (59%). Similar shares say reception of Holy Communion should be approved for divorced Catholics who remarry without having their first marriage annulled (62%) and for Catholics living with a romantic partner without being married (61%).

Cultural Catholics are more supportive of changes to Catholic Church teachings than are Catholics by religion. For example, 84% of cultural Catholics say the church should modify its ban on the use of artificial birth control compared with 76% of Catholics.

Ex-Catholics are more supportive than Catholics of allowing priests to get married (79% vs. 62%) and women to become priests (66% vs. 59%), but they are no more likely than Catholics to support other changes to church teachings and policies.

The study also shows that Catholics ages 65 and older tend to be less supportive of changes in church teachings than are younger Catholics. And Catholics under 50 express more support for having the Catholic Church recognize the marriages of gay and lesbian couples than do older adults.

Catholics with the highest levels of educational attainment are more supportive of changes in church teachings and policies than are those with less education. There is little difference between men and women in support for these changes, even when it comes to ordaining women as priests. 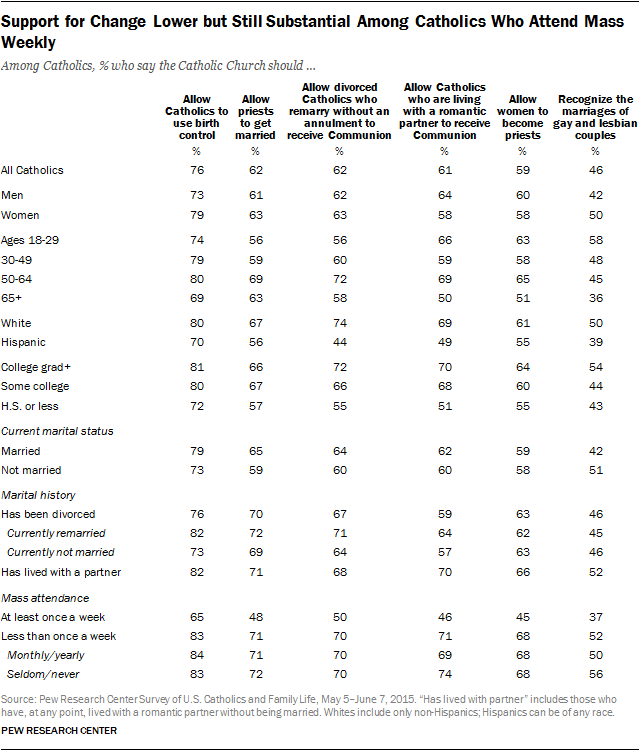 Catholics’ Expectations for Change in the Church 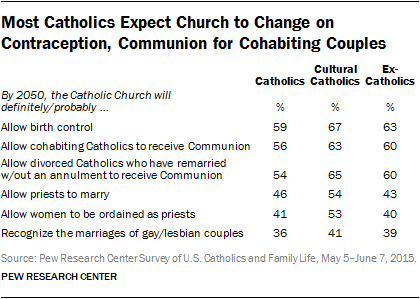 Nearly six-in-ten Catholics believe the church’s ban on artificial contraception will definitely or probably be overturned by 2050. Half or more of U.S. Catholics also say that, by 2050, the Catholic Church will expand eligibility for receiving Holy Communion to include unwed Catholics living with a romantic partner (56%) and divorced Catholics who have remarried without getting an annulment (54%).

But Catholics are less convinced that the church will allow priests to marry (46%), ordain women as priests (41%) or recognize same-sex marriages (36%).

Overall, cultural Catholics are more likely than Catholics by religion to expect big changes from the church.

Compared with weekly Mass-attending Catholics, those who attend Mass more sporadically are somewhat more likely to expect changes in church teaching. The differences in expectations, however, are much smaller than the differences in desire for these changes. 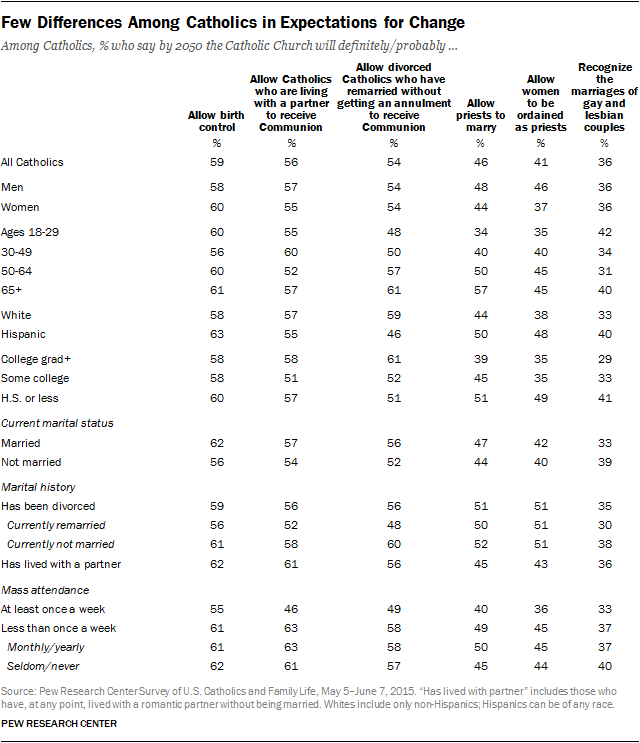 Next: Chapter 5: Beliefs About Sin Next Page → ← Prev Page