Women are generally more religious than men, particularly among Christians

Standard lists of history’s most influential religious leaders – among them Abraham, Moses, Jesus, Muhammad, Siddhartha Gautama (the Buddha) – tend to be predominantly, if not exclusively, male. Many religious groups, including Roman Catholics and Orthodox Jews, allow only men to be clergy, while others, including some denominations in the evangelical Protestant tradition, have lifted that restriction only in recent decades. Yet it often appears that the ranks of the faithful are dominated by women.

In the United States, for example, women are more likely than men to say religion is “very important” in their lives (60% vs. 47%), according to a 2014 Pew Research Center survey. American women also are more likely than American men to say they pray daily (64% vs. 47%) and attend religious services at least once a week (40% vs. 32%).1 According to media accounts, women so outnumber men in the pews of many U.S. churches that some clergy have changed decor, music and worship styles to try to bring more men into their congregations.

Noting similar gender differences in other countries, mainly in Europe, some social scientists have argued that women are universally more religious than men across all societies, cultures and faiths.2 More controversially, a few sociologists have theorized that the gender gap in religion is biological in nature, possibly stemming from higher levels of testosterone in men or other physical and genetic differences between the sexes.3

How and why men and women differ in religious commitment has been a topic of scholarly debate for decades. Even today, it continues to inspire much academic research, as well as discussions among the general public. To contribute to this ongoing conversation, Pew Research Center has amassed extensive data on gender and religion in six different faith groups (Christians, Muslims, Buddhists, Hindus, Jews and the religiously unaffiliated) across scores of countries, including many with non-Christian majorities. Data on affiliation in 192 countries were collected from censuses, demographic surveys and general population surveys as part of the Center’s multiyear study projecting the size and geographic distribution of the world’s major religious groups from 2010 to 2050. 4 Data on religious beliefs and practices come from international Pew Research Center surveys of the general population in 84 countries conducted between 2008 and 2015.5

Based on these wide-ranging and comprehensive datasets, this study finds that, globally, women are more devout than men by several standard measures of religious commitment. But the study also reveals a more complex relationship between religion and gender than has been commonly assumed. While women generally are more religious, men display higher levels of religious commitment in some countries and religious groups. And in other contexts, there are few, if any, discernable gender differences in religion.6

Measuring levels of religious commitment in widely differing societies and faiths is a tricky endeavor. Rather than trying to use a single indicator, this report looks at a variety of measures of commitment, including religious affiliation, frequency of worship service attendance, frequency of prayer, and whether religion plays an important role in a person’s life. Depending on the specific measure, data are available for varying numbers of countries because not all surveys asked the exact same questions.

The first measure the study looks at is affiliation – that is, whether people belong to any particular religion. An estimated 83.4% of women around the world identify with a faith group, compared with 79.9% of men, according to Pew Research Center’s analysis of censuses, surveys and population registers in 192 countries and territories. This gap of 3.5 percentage points means that an estimated 97 million more women than men claim a religious affiliation worldwide, as of 2010.7

In 61 of the 192 countries, women are at least 2 percentage points more likely than men to have an affiliation. In the remaining countries, women and men display roughly equal levels of religious affiliation because in many cases nearly all people of both genders identify with some religious group. There are no countries in which men are more religiously affiliated than women by 2 percentage points or more.8 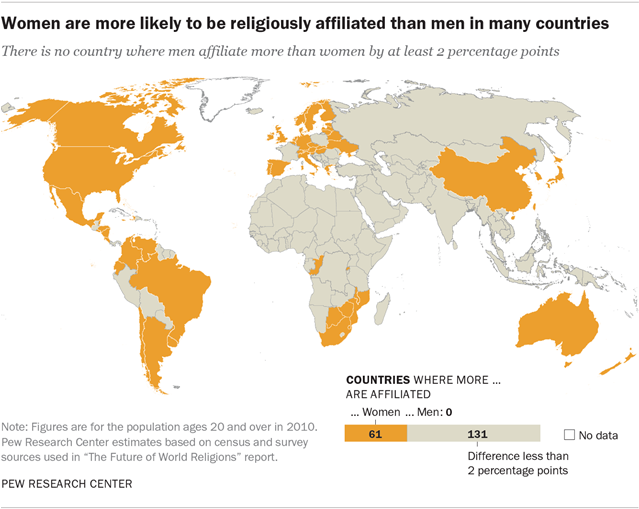 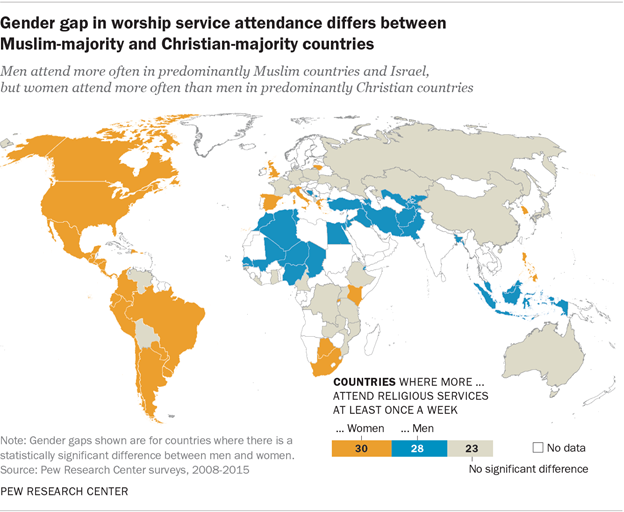 Another useful indicator of religious commitment is how often women and men say they attend religious worship services. The biggest exceptions to the overall pattern of women exceeding men in religious commitment can be found on this measure. Among Christians in many countries, women report higher rates of weekly church attendance than men. But among Muslims and Orthodox Jews, men are more likely than women to say they regularly attend services at a mosque or synagogue.9 Higher levels of weekly attendance among Muslim and Jewish men are due in large part to religious norms that prioritize men’s participation in worship services. In Orthodox Judaism, communal worship services cannot take place unless a minyan, or quorum of at least 10 men, is present. And in most Islamic societies, Muslim men are expected to attend communal Friday midday prayers in the mosque, while women can fulfill this obligation individually, either inside or outside the mosque.

Worldwide, this results in a mixed attendance pattern. Out of 81 countries where Pew Research Center surveys have asked about worship service attendance, women report greater levels of weekly attendance in 30 countries, most of which have Christian majorities or large Christian populations. In 28 countries – mostly places with Muslim majorities or large Muslim populations – men report greater weekly attendance than women. In the remaining 23 countries, the difference between women and men in self-reported attendance is not statistically significant. 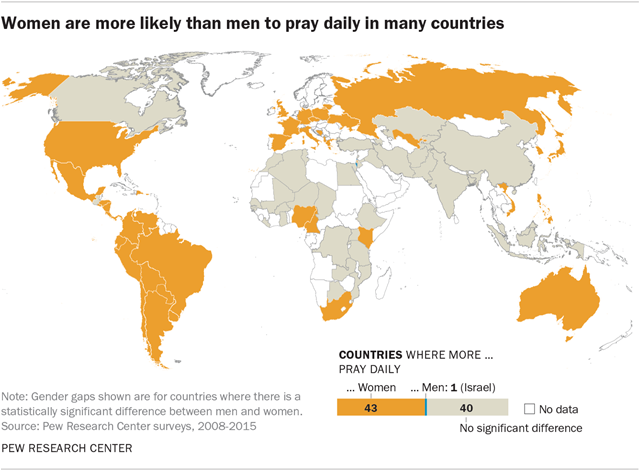 Another measure of religious commitment concerns prayer, which can take place privately as well as publicly. Pew Research Center surveys have asked people in 84 countries how often they pray. In about half of those countries (43), substantially more women than men say they pray on a daily basis. Only in Israel, where roughly 22% of all Jewish adults self-identify as Orthodox, does a higher percentage of men than women report engaging in daily prayer. In the remaining countries, women and men are about equally likely to say they pray daily.

The difference between women and men in self-reported rates of daily prayer is the biggest average gender gap found in this study. Across the 84 countries for which data are available, the average share of women who say they pray daily is 8 percentage points higher than the average share of men. Even religiously unaffiliated women in some countries, including the United States and Uruguay, report praying daily at higher rates than unaffiliated men do. 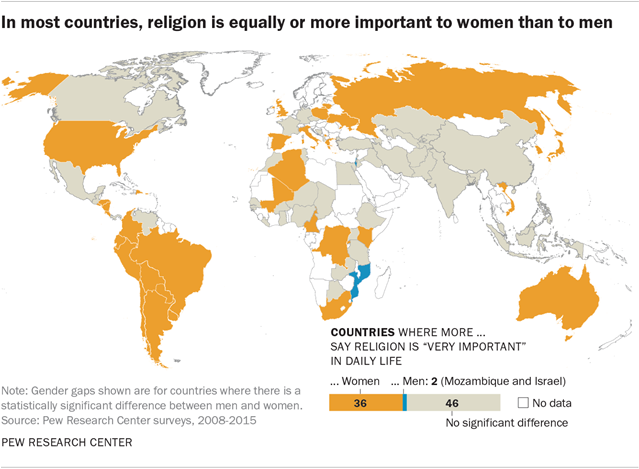 Religion equally or more important to women than to men

Women and men about equally likely to believe in heaven, hell and angels

By most key measures of religious commitment, Muslim men and women are more alike in their levels of religiousness than are Christian men and women. For example, in the 40 countries where data were collected on Muslims’ prayer habits, Muslim women report praying daily more often than Muslim men by an average difference of only 2 percentage points. A similar pattern occurs in religion’s importance. There is virtually no difference between the shares of Muslim women and Muslim men who say religion is “very important” to them in the 40 countries with data on this topic. When it comes to weekly attendance at religious services, however, the pattern is very different: Muslim men are more likely than Muslim women to regularly attend services by an average of 28 percentage points across the 39 countries where Muslim attendance data were collected.

To explore gender differences in religious commitment among general populations as well as among Christians and Muslims, check out this interactive. 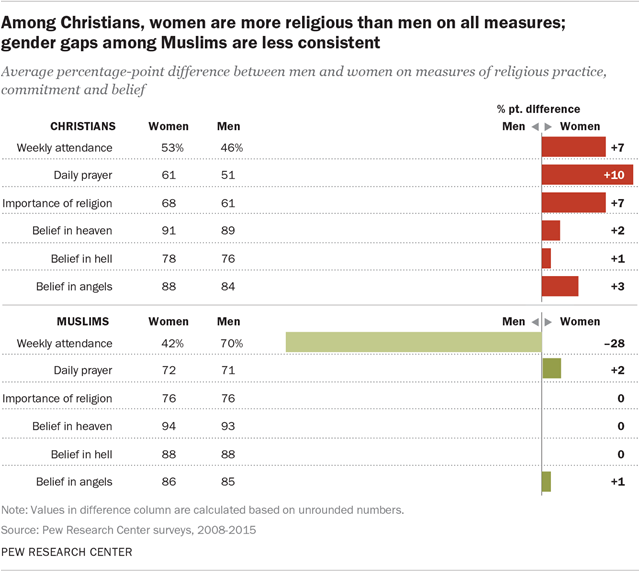 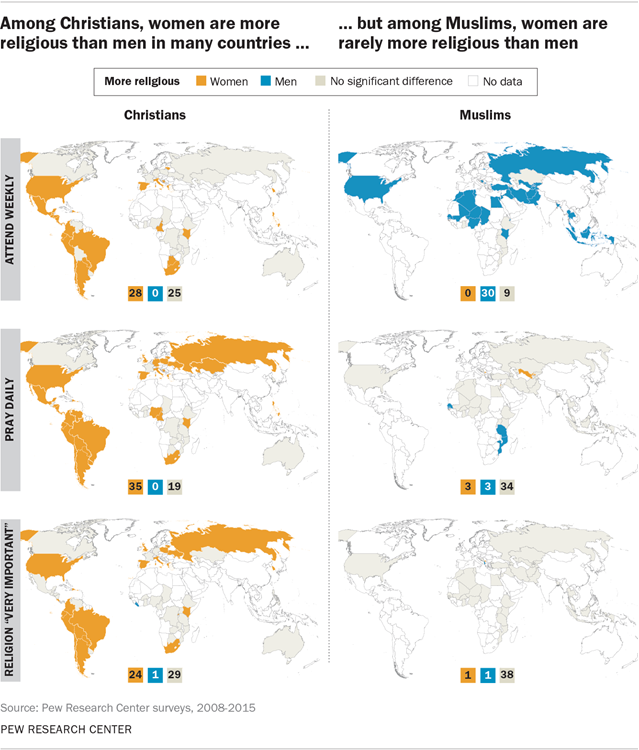 Scholars of religion have been examining possible reasons for the gender gaps in religious commitment for some time. They have advanced many different theories, which cover a wide range of sources: biology, psychology, genetics, family environment, social status, workforce participation and a lack of “existential security” felt by many women because they generally are more afflicted than men by poverty, illness, old age and violence. Lately, a growing consensus in the academic community is that the religious gender gap probably stems from a confluence of multiple factors. But there is still no agreement on exactly which factors are most responsible for the gender differences.

That analysis, along with the finding that women are not universally more religious than men, lends support to explanations of the religious gender gap that include “nurture” (i.e., social and cultural forces) and not just “nature” (i.e., biological or evolutionary forces). By drawing on data from more Muslim-majority countries and non-European countries than previous studies, this report demonstrates that the gender gap is not consistent across societies or religious traditions; differences in religious commitment between men and women vary considerably around the globe. This does not mean explanations that lean heavily on “nature” might not also help explain the religious gender gap and its prevalence throughout the world. But it does suggest that social and cultural factors, such as religious traditions and workforce participation, play an important role in shaping the religious gender gap.

This report highlights country-level differences in religious commitment between men and women that pass conventional tests of statistical significance – that is, there is at least a 95% confidence level that the observed differences are not due to sampling error, after taking into account the size of the sample and the design effects of the survey. On some charts, gender differences that may appear to be large are labeled as not statistically significant because of small sample sizes of women and men in particular religious groups. Data for a particular religious group in each country are used only if that group had at least 300 survey respondents. Except for the measure of religious affiliation, countries are weighted equally when presenting the average gender gap across a number of countries – that is, the size of their populations is not factored into the calculations. In the case of religious affiliation, the population size of each country is considered when computing country and global averages.

Next: 1. Women more likely than men to affiliate with a religion Next Page → ← Prev Page