1. Number of countries with very high restrictions and hostilities went down in 2014

Most countries in the world have some form of government restrictions on religion, but each year a few countries stand out as having particularly extensive restrictions.

Countries with the most extensive religious hostilities 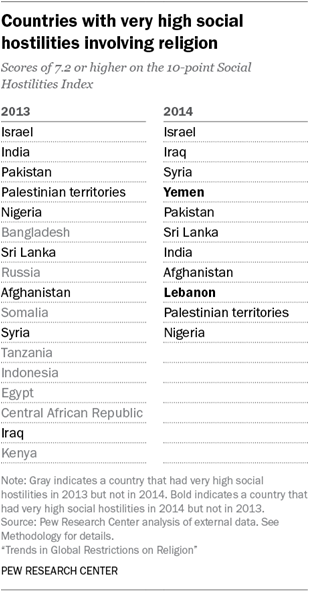 As is the case with government restrictions, some countries stand out for having very extensive social hostilities involving religion.

The number of countries and territories with a “very high” level of social hostilities involving religion fell from 17 in 2013 to 11 in 2014.15 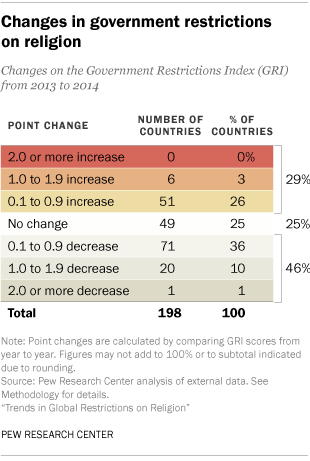 Just one country – Angola – had a large change (2.0 points or more) on the Government Restrictions Index in 2014, and it was in the direction of lower restrictions. There was more government intervention in cases of discrimination or abuse against religious groups and less government violence toward minority religious groups.

Among the 26 countries with modest changes in their GRI scores (1.0 to 1.9 points), six had increases and 20 had decreases. Kazakhstan and the Czech Republic were among the six countries with modest increases; among other things, both countries experienced an increase in government regulation of religious dress.17 In western Kazakhstan, a court held that a preschool was within its rights when it prohibited a young girl from wearing a head-covering hijab because it violated the school’s dress code. The girl’s parents later removed her from the school.18 In the Czech Republic, women were banned from wearing hijabs in some circumstances. For instance, a school of nursing in Prague banned women from wearing headscarves in class. At least two women left the school as a result of the ban. One of them later filed a complaint with the Ministry of Education, whose ombudsman termed the ban discriminatory. The school did not abandon the policy, however, and, as recently as 2016, at least one lawsuit related to the ban was ongoing.19

Albania was one of 20 countries (10%) with modest decreases in their GRI scores in 2014, meaning changes of 1.0 to 1.9 points. Although the country continued to have issues regarding the return of religious properties seized by the government during the country’s decades-long Communist era, some progress was reported. For example, the government completed the return of four properties to the Orthodox Church; it restored one property to the Roman Catholic Church; and it compensated the Muslim community in the city of Shkoder for one property.20 In addition, Albania’s Parliament passed a law in July 2014 allowing the creation of religious cemeteries, which had been banned by the government since the late 1960s.21

Among countries with small changes on the Government Restrictions Index (less than one point), 51 (26%) had increases and 71 (36%) had decreases. 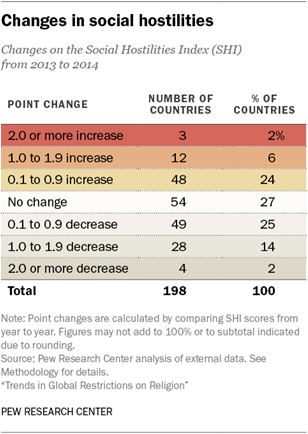 Some countries may experience significant changes in their scores on the Social Hostilities Index irrespective of whether they have “very high” levels of social hostilities. This section looks at the extent and direction of those changes from 2013 to 2014.

In Jordan, tensions over religious conversions sometimes led to violent clashes. In May 2014, for example, a man from the northern city of Ajloun confessed to killing his daughter after she converted from Christianity to Islam. The murder, and subsequent disputes over whether the woman should be buried in a Muslim or Christian cemetery, set off two days of protests and violent encounters in which protestors burned several houses. Clashes subsided only after tribal leaders intervened and the government dispatched security forces.23 In several other instances, people who had converted reported being ostracized, threatened or physically abused by their families or religious leaders.24

Among the factors that contributed to the increase in social hostilities in the United States was an uptick in anti-Semitic activities. For example, the Anti-Defamation League reported that members of the Ku Klux Klan increased their distribution of racist and anti-Semitic fliers.25 There also were reports of Jewish establishments being vandalized in several parts of the country, including several incidents in February 2014 involving a Jewish delicatessen and bakery in Albuquerque, New Mexico.26 More than half of the incidents of anti-religious hate crimes in the U.S. in 2014 (58%) were motivated, in whole or in part, by anti-Jewish bias, according to the FBI; 16% of the incidents were motivated by anti-Muslim bias. 27

The four countries where social hostilities declined by two points or more from 2013 to 2014 were Bangladesh, Nepal, Romania and Tanzania. In Bangladesh, for instance, incidents of sectarian violence, religion-related mob violence and harassment of women for religious dress all declined.

Of the 40 countries (20%) that had modest changes (1.0 to 1.9 points) in their scores in 2014, 12 had increases and 28 had decreases. One of the countries that had a modest increase was Laos, where the growth of Christian congregations, coupled with scarce resources in rural communities, led to increasing tensions with the country’s Buddhist majority. In March 2014, for instance, six families that had converted to Christianity were forced to leave the southern village of Natahall after their religious practices caused friction with village elders.28 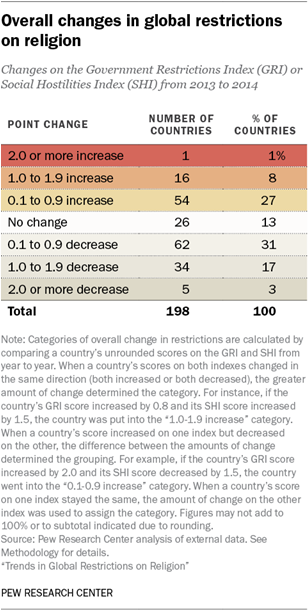 Next: 2. Harassment of specific religious groups: Christians and Muslims were harassed in the most countries in 2014 Next Page → ← Prev Page