Americans ages 65 and older are much less likely than younger adults to say they know someone who is transgender. Only 16% of those in the 65-and-older cohort know a transgender person, compared with at least twice as many of those in each younger age group. 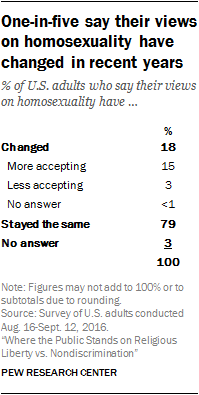 Those who have become more accepting of homosexuality in recent years give a variety of reasons for their change of heart. Some of the most common responses include those who say they now believe people should be free to live their lives in whichever way they choose (2%). In the words of one respondent: “Each person should be allowed to live their own life without me or any other person interfering.”

Among those who say they have become less accepting of homosexuality in recent years, the most common type of answer involves religious beliefs. For example, one respondent stated: “I believe God created man and woman, and homosexuality is a learned behavior.”