Christians are one of the world’s most highly educated religious groups: The vast majority of Christian adults ages 25 and older (91%) have at least some formal schooling, and one-in-five have post-secondary degrees. 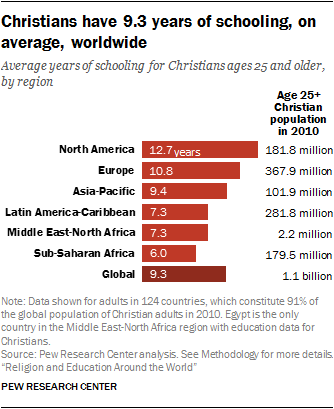 Christians – who make up the world’s largest religious group at 2.2 billion people, including more than a billion adults 25 and older in 2010 – are more geographically dispersed than adherents of other major religions, and they show a wide variation in educational attainment across different regions. Globally, Christians have spent 9.3 years in school, on average. But regionally, this average ranges from 12.7 years in North America (where the Christian population is projected to increase slightly from 267 million in 2010 to 287 million in 2050) to 6.0 years in sub-Saharan Africa (where Christians of all ages are expected to grow rapidly from 517 million in 2010 to 1.1 billion by mid-century). 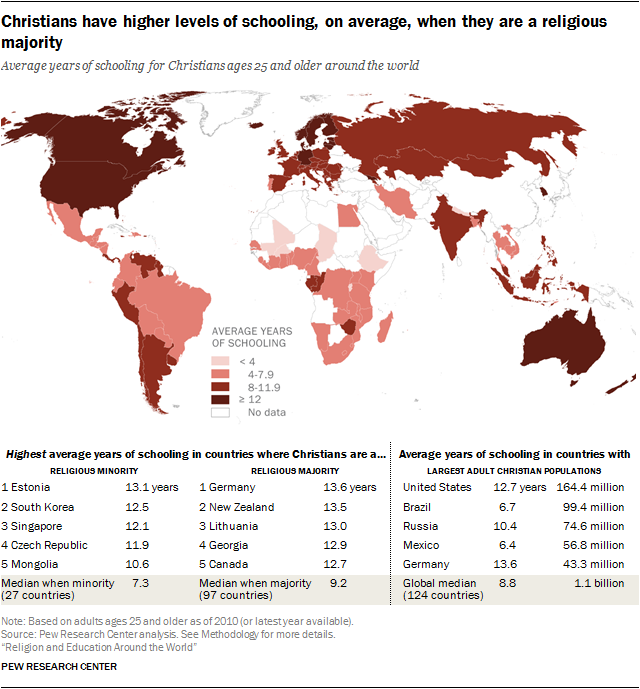 In North America and Europe, Christians universally (98% or more) have at least some formal schooling, as do nine-in-ten or more Christians in the Latin America-Caribbean and Asia-Pacific regions. In sub-Saharan Africa, however, about three-in-ten Christians (30%) have received no formal education.10 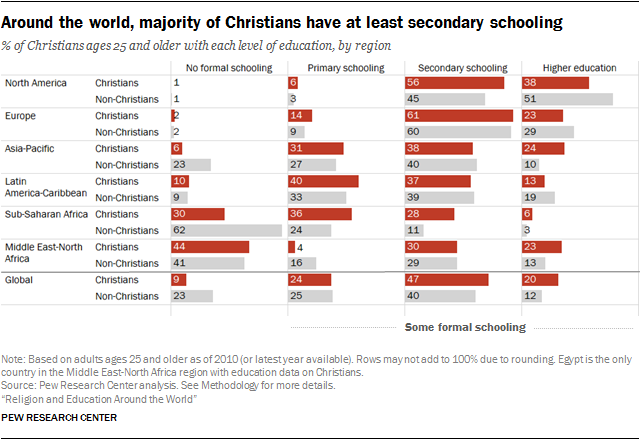 These gender gaps are wider, however, in certain parts of the world. In sub-Saharan Africa, for example, Christian women have 1.8 fewer years of schooling, on average, than Christian men. But in North America and Latin America, there is virtually no gender gap in educational attainment for Christians. 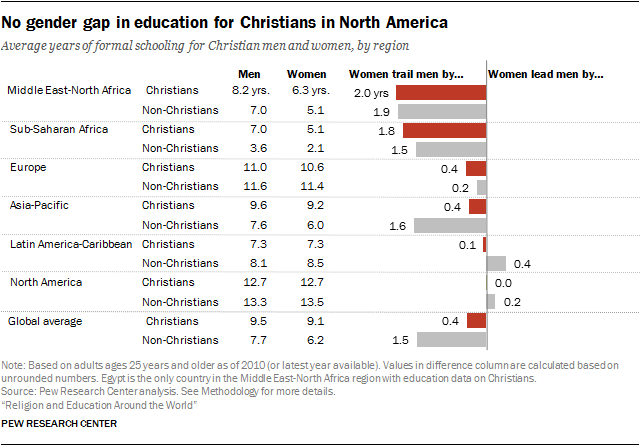 Small gains in education across generations

For example, after an increase of almost a full year of schooling between the oldest and middle age cohorts (from an average of 8.9 years of schooling to 9.8 years), Christians in the youngest cohort have not made similar gains, averaging 9.9 years of schooling. Additionally, the share of Christians with at least some formal schooling is comparable for the middle and youngest cohorts (92% and 93%, respectively). And the share of Christians with post-secondary degrees has held steady at 23% between these two generations. 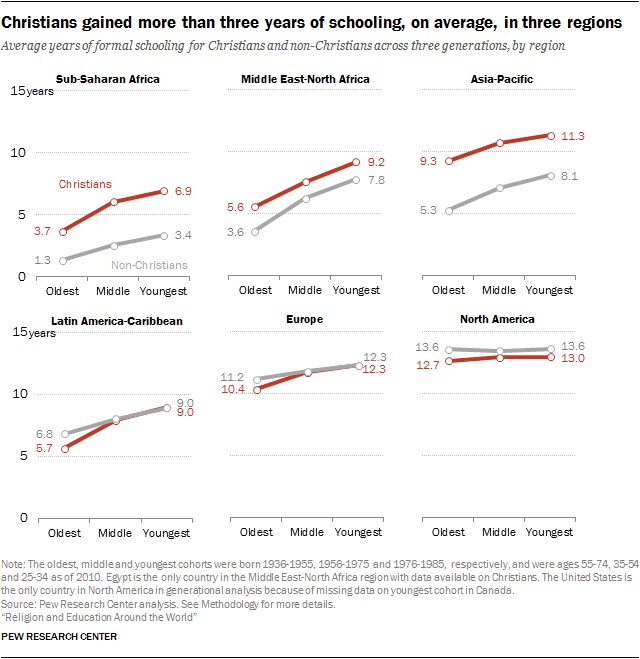 Globally, the share of Christians with no formal schooling has declined by 4 percentage points across generations, from 12% in the oldest generation to 8% in the youngest. Christians in sub-Saharan Africa and the Middle East and North Africa, however, saw much larger decreases in the same time period: a 28-point decline and a 27-point drop, respectively.11 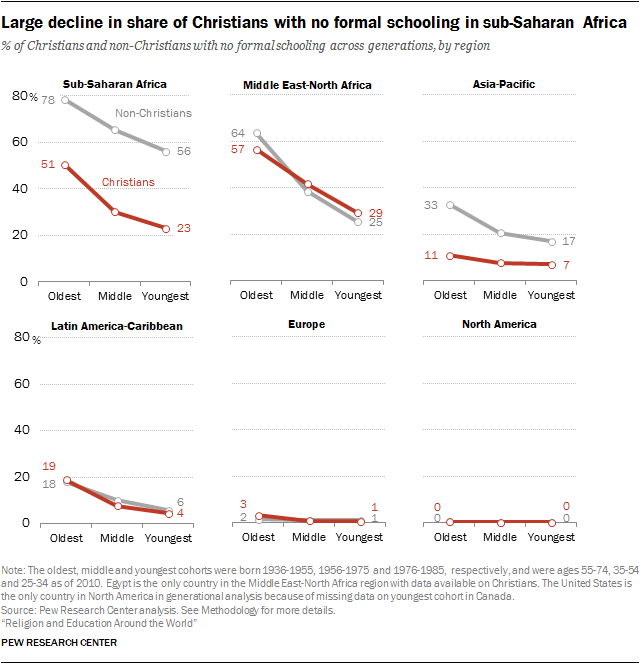 Christians in sub-Saharan Africa are projected to increase from 24% of the global Christian population in 2010 to 38% by 2050. Overall, 30% have no formal education, which is one of the highest shares of Christians with no schooling in any region in the world.12 At the other end of the spectrum, about a third (35%) have at least some secondary schooling.13

But Christian women in sub-Saharan Africa are making bigger strides than men across generations, especially when it comes to gaining some basic schooling. The share of Christian women in the region with at least some formal education increased by 36 percentage points (36% to 72%) between the oldest and youngest generations in the study, while the comparable increase for Christian men was 18 percentage points (65% to 83%). 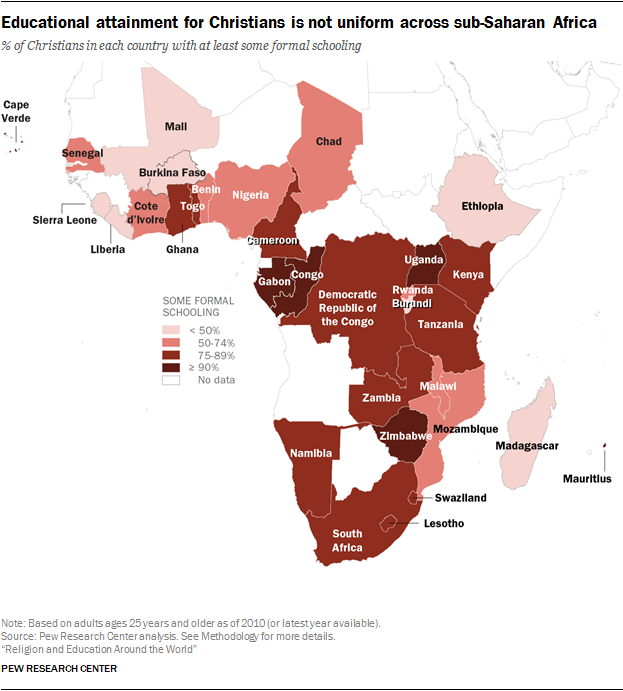 Across the three generations in the study, Christian women have made greater gains than Christian men in many indicators of educational attainment. These gains have nearly erased the global gender gap among Christians, and, in some regions and countries, led to a gender gap reversal – in the youngest generation, women have more education, on average, than men. 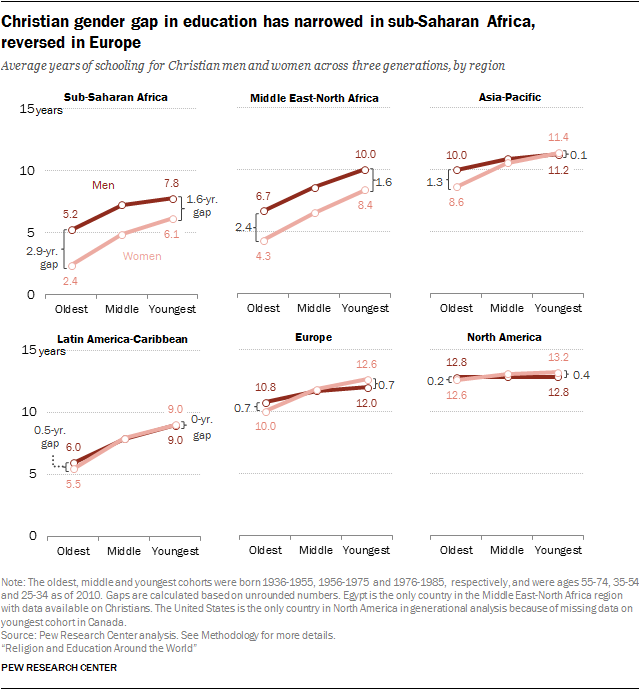 Stagnation in higher education attainment among Christian men is especially notable in the United States, where the share with post-secondary degrees has decreased slightly from 37% in the oldest generation to 34% in the youngest. This change, combined with women’s gains, means that in the youngest generation of U.S. Christians, women are more likely than men – by 10 percentage points – to have a post-secondary education. 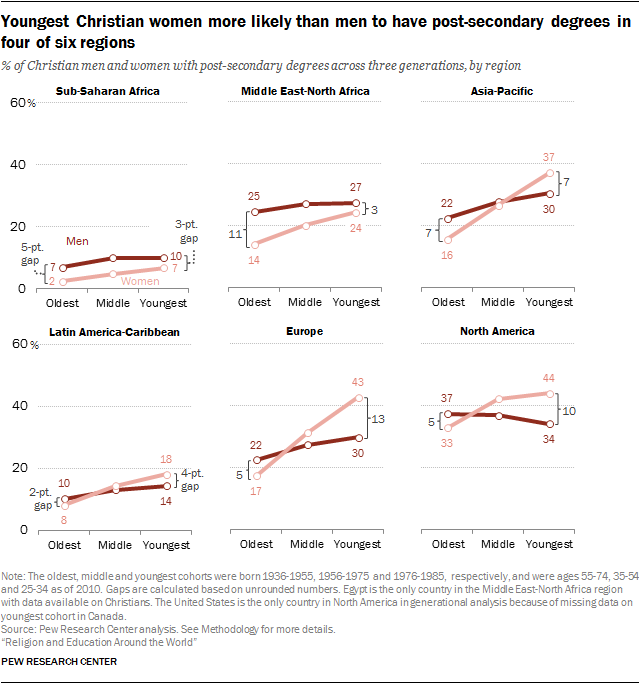 Christians are at the forefront of a global trend that also is occurring among Jews and unaffiliated people: the reversal of the historical gender gap in higher education. In the youngest generations of these three religious groups, women are more likely than men to have post-secondary degrees. For Christians, this is particularly apparent in Europe.

Next: 3. Educational attainment among the religiously unaffiliated Next Page → ← Prev Page