Hindus have made substantial educational gains in recent decades. Hindu adults (ages 25 and older) in the youngest generation analyzed in the study, for example, have an average of 3.4 more years of schooling than those in the oldest generation.

However, Hindus still have the lowest level of educational attainment of any major religious group in this study. Globally, they average 5.6 years of schooling, and 41% of Hindus have no formal education of any kind. One-in-ten have post-secondary degrees. 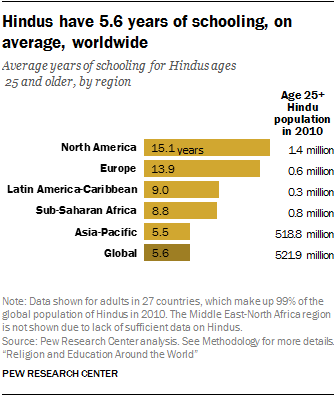 In addition, despite large gains by Hindu women across generations, Hindus still have the largest educational gender gap of any religious group. On average, Hindu men have 2.7 more years of schooling than Hindu women, and just over half of Hindu women (53%) have no formal schooling, compared with 29% of Hindu men. Even in the youngest generation of adults in the study, Hindu women are considerably more likely than Hindu men to have received no formal education (38% vs. 20%).

The vast majority of the world’s Hindus live in India (94%) or in the bordering countries of Nepal (2.3%) and Bangladesh (1.2%). In these three countries, Hindus tend to have low levels of education; in India, Hindus average 5.5 years of schooling, while in Nepal and Bangladesh they average 3.9 and 4.6 years, respectively. 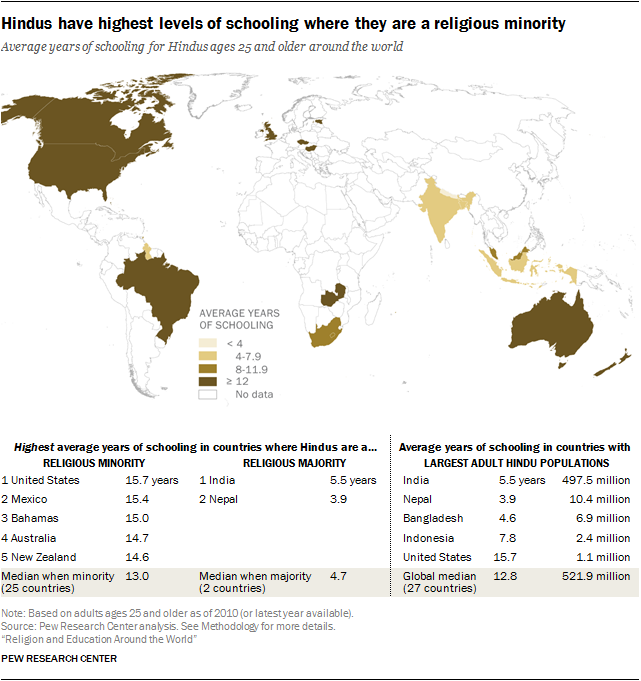 Similarly, levels of higher education among Hindus vary widely around the world. One-in-ten Hindus in the Asia-Pacific region have post-secondary degrees (including 10% in India and 6% in the region’s other countries). But in North America and Europe, majorities of Hindus (87% and 57%, respectively) have a post-secondary education. 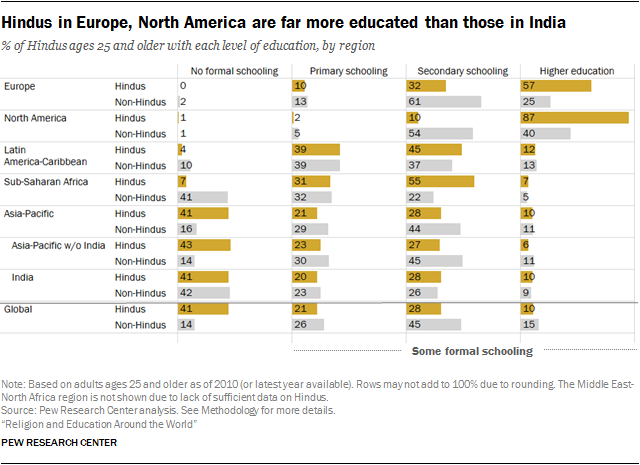 The educational gender gap among Hindus is larger than that of any other religious group. Worldwide, Hindu men have an average of 6.9 years of schooling, compared with 4.2 years for Hindu women. Just over half of Hindu women (53%) have no formal education, compared with 29% of Hindu men. The gender gap in higher education is narrower, but Hindu men are still nearly twice as likely as women to have post-secondary degrees (13% vs. 7%).

Outside the Asia-Pacific region, however, gender gaps among Hindus are narrower. In Latin America and the Caribbean, for example, Hindu men and women have nearly the same number of years of schooling, on average, and similar shares have higher education. And in North America, Hindu men average less than a year more schooling than women, while large majorities of both men and women have a post-secondary education (92% and 80%, respectively). In Europe, the pattern is similar to that seen in North America. 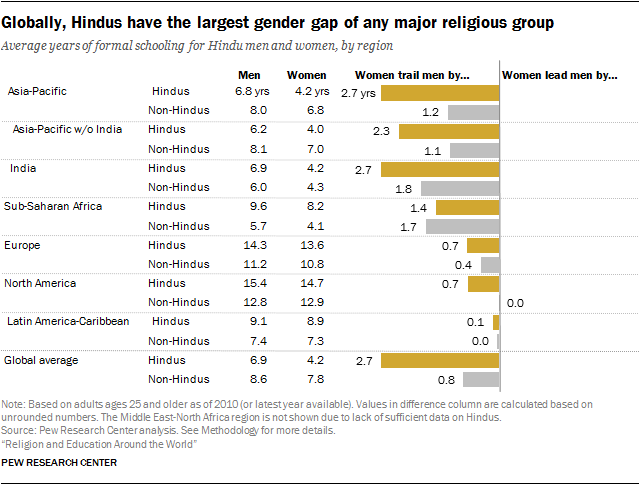 Hindus make gains in educational attainment across generations, but still trail other groups

Hindus, starting from a relatively low base, have made some of the most rapid educational gains of any religious group. Across the three generations in this study, Hindus have gained an average of nearly 3.4 additional years of schooling. The largest increase has taken place among Hindus in sub-Saharan Africa, where the youngest generation in the study has 10.2 years of schooling, on average, compared with 5.6 years of schooling for the oldest generation. 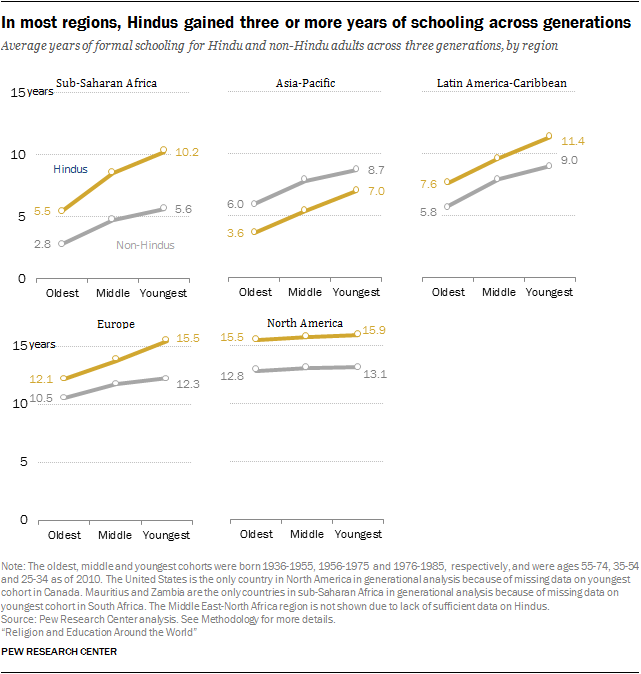 Hindu adults worldwide also have made large gains in the share that have some formal schooling – especially in the Asia-Pacific region, where the overwhelming majority of Hindus live. The share of Hindus in this region with no formal education has dropped dramatically, from 57% in the oldest generation (born 1936 to 1955) to 29% in the youngest (born 1976 to 1985). In all other regions, nearly universal shares of those in the youngest generation of Hindus have at least some basic education. 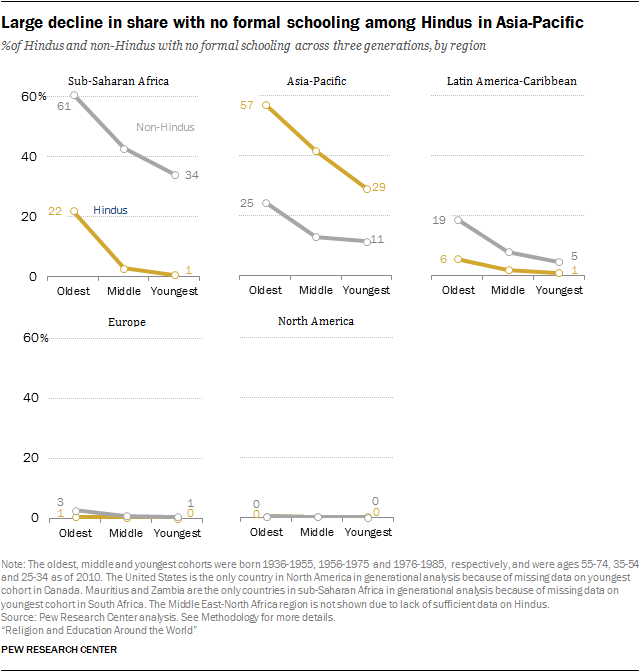 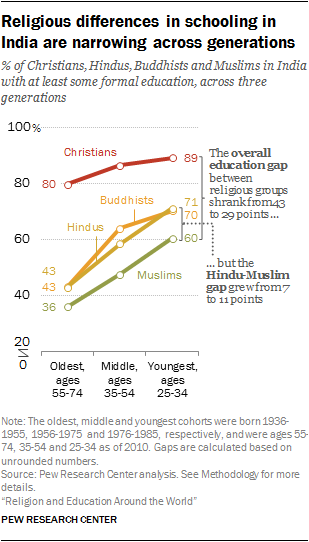 India is home to 94% of the world’s Hindus, who make up nearly 80% of the country’s population. The second most populous country in the world, India is rich in religious diversity, with large minority populations of Muslims, Christians and Buddhists. In fact, by 2050, India is projected to have the biggest Muslim population – some 311 million – of any country.

Educational attainment has been increasing rapidly for all religious groups in India in recent decades. But there are notable differences among the groups, especially in the share of those who have some formal education. Around six-in-ten Hindu and Buddhist adults (ages 25 and older) in India have at least some formal schooling, compared with half of Muslims and 85% of Christians.

These educational differences have narrowed across generations as Hindus, Buddhists and Muslims make more rapid progress than Christians. For example, in the oldest generation in the study, there was a 37-point difference between Christians and Hindus in the shares with at least some formal schooling (80% among Christians vs. 43% among Hindus); among the youngest generation, that gap has shrunk to just 18 points (89% vs. 71%).

Hindu women are gaining on men in attainment, but large gender gaps persist

Still, even among those in the youngest generation, Hindus continue to have the largest gender gap in average years of schooling of any major religious group.

Outside the Asia-Pacific region, however, Hindu women have reached parity with men in average years of schooling. In Europe, the gender gap shrank from 1.5 years among the oldest generation of Hindus to virtually no gap among the youngest. And in sub-Saharan Africa, the oldest Hindu women lag behind men by an average of 3.4 years of schooling, but the youngest Hindu women are more educated than their male peers by nearly half a year, on average. 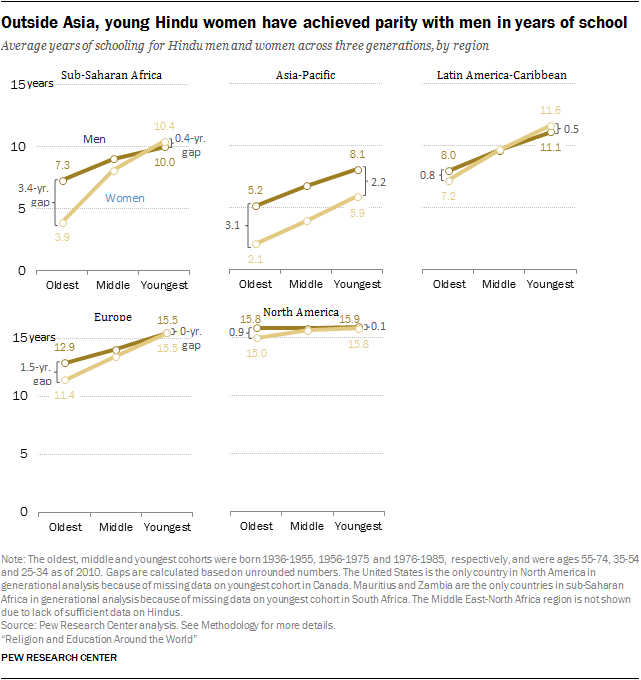 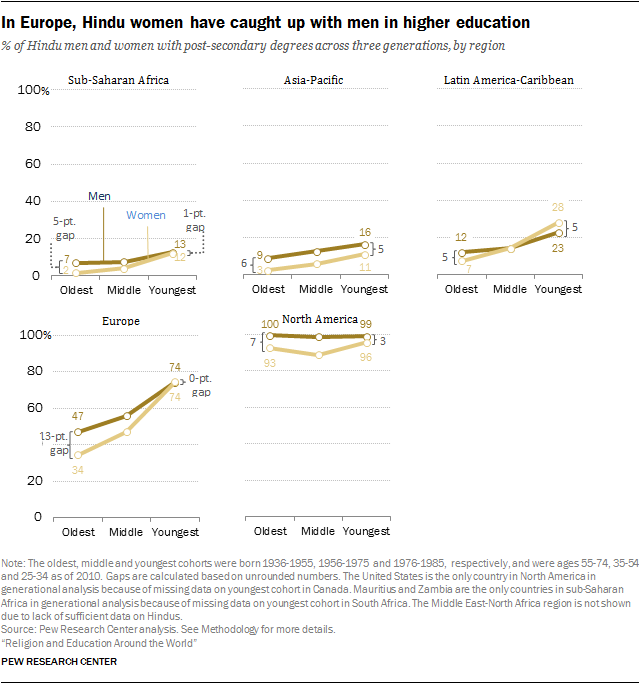