With an average of 13.4 years of schooling, Jews are the most highly educated of the world’s major religious groups. Nearly all Jewish adults ages 25 and older around the world (99%) have at least some primary education, and a majority (61%) has post-secondary degrees. 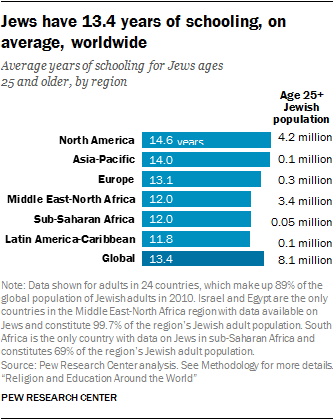 This high level of education has been the case for several decades, meaning that Jewish educational gains across recent generations have been modest. The youngest cohort of Jews analyzed in the study has, on average, just 0.4 more years of schooling than the oldest cohort, while the share with higher education has increased by only 1 percentage point across the three generations in the study. In fact, the share of Jewish men with post-secondary degrees actually has declined globally, driven by trends in the United States.27

About eight-in-ten of the world’s Jews live in Israel or the U.S.28 In Israel, Jewish adults have an average of 12.0 years of schooling, while in the U.S. they average 14.7 years. Jews living outside these two countries also tend to be highly educated and, in most cases, have greater levels of attainment than their non-Jewish compatriots. 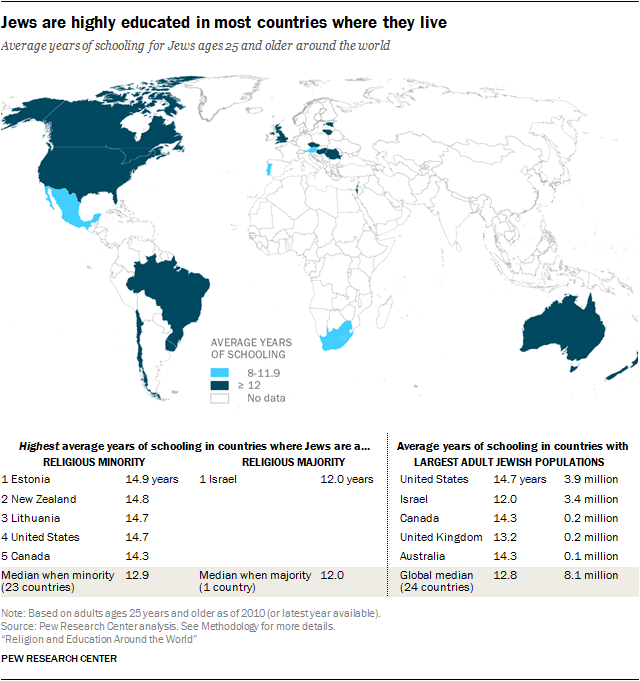 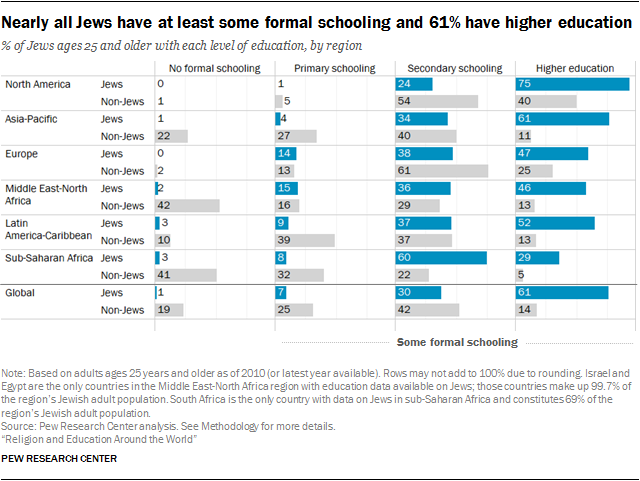 There are greater discrepancies among Jews in different regions when it comes to higher education. Just under half of all Israeli Jews (46%) and three-quarters of North American Jews have post-secondary degrees. But in South Africa, fewer than three-in-ten Jewish adults (29%) have obtained this level of higher education.

Jews have a great deal of gender equality in educational attainment. Globally, Jewish men and women each have 13.4 years of schooling, on average, and 61% of both men and women have post-secondary degrees. In the youngest generation of Jews, women have a year more of schooling, on average, than men, and women are more likely than men (by 12 percentage points) to have higher education.30 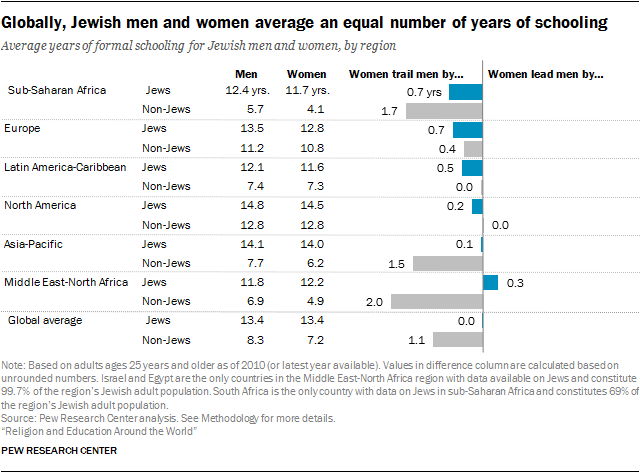 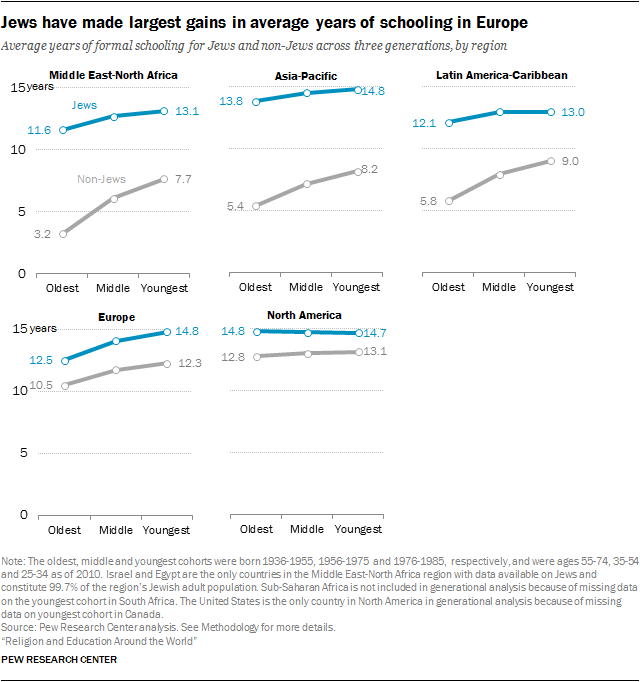 Sidebar: Education gap between Israeli Jews and Muslims is large but narrowing

Differences in educational attainment between Jews and Muslims in Israel are substantial. In the oldest generation in the study, Israeli Jews have an average of 11.6 years of schooling – roughly six years more than Israeli Muslims, who have, on average, 5.7 years of schooling.

But among the youngest generations, the educational attainment gap between Jews and Muslims has narrowed due to large gains among Muslims. Across three generations, Israeli Muslims gained nearly four additional years of schooling, on average (from 5.7 years to 9.5 years), compared with an increase of 1.5 years among Israeli Jews (11.6 years to 13.1 years). The result is a 3.7-year difference in average years of schooling between Jews and Muslims in the youngest generation.

The share of Jews worldwide who have no formal schooling has decreased from 1.5% among the oldest generation to 0.5% among the youngest. The largest declines were in the Latin America-Caribbean region and in Israel (3- and 2-percentage point declines, respectively). In every region of the world, 99% of Jews in the youngest cohort in the study have at least some formal schooling.

Globally, the share of Jews with post-secondary degrees has increased by 1 percentage point across the three generations in the study, from 62% among the oldest to 63% among the youngest. But gains have been more substantial in some regions. In Europe, the share of Jews with higher education has increased by 23 percentage points across these generations, from 42% to 65%. And in Israel, the youngest generation is 10 percentage points more likely than the oldest to have a post-secondary education (56% vs. 46%). 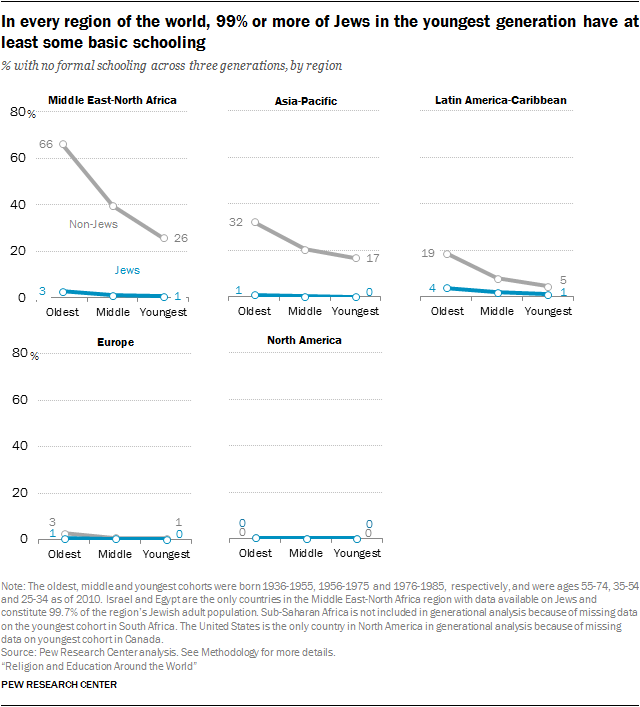 In Israel, Jewish men and women in the oldest generation in the study had the same average levels of education. But in the youngest generation, women average a full year more of schooling. The youngest Jewish women in Europe and North America also have surpassed their male peers in this regard. 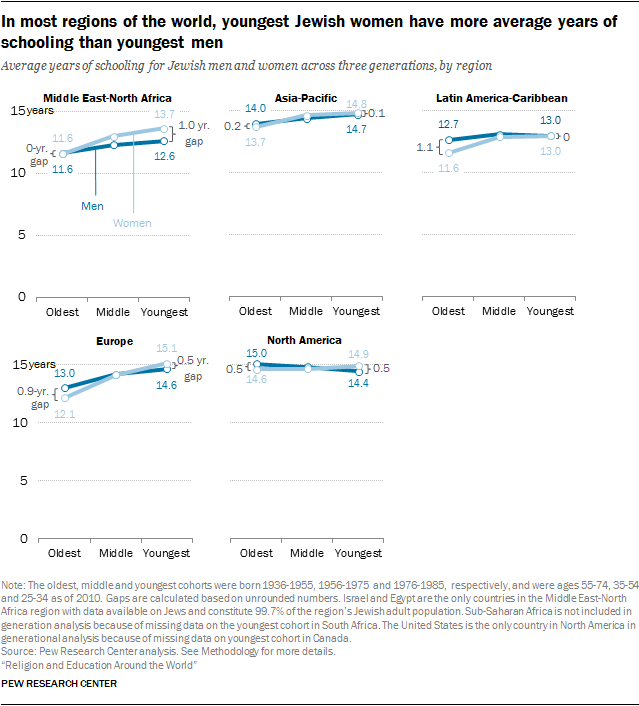 The drop in the global share of Jewish men with higher education is primarily due to trends in the United States, home to 41% of the world’s total Jewish population of all ages (as of 2010). The share of Jewish men in the United States with post-secondary degrees has declined from 81% in the oldest generation to 65% in the youngest, a 17-point decrease. A number of factors are behind this decline (for more, see the sidebar below). 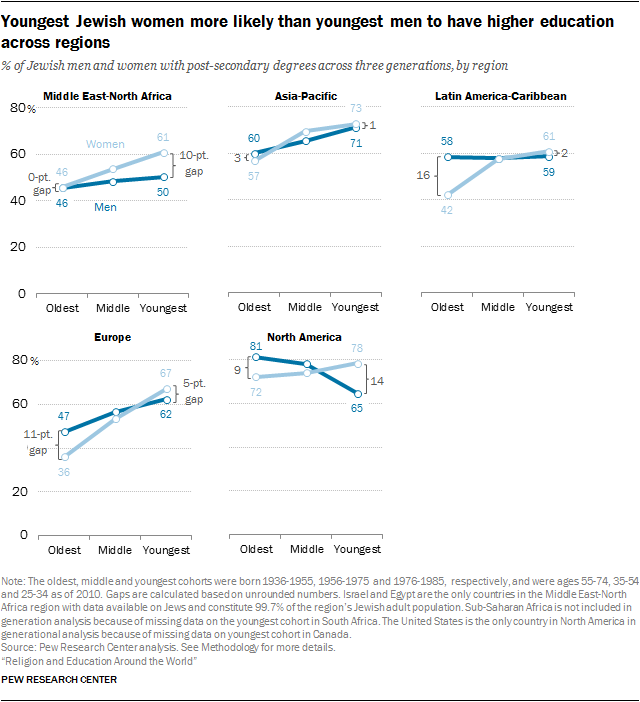 Sidebar: Behind the decline in higher education among Jewish men in the United States

Although Jews are one of the most highly educated religious groups in the United States, the youngest Jewish men are less likely than the oldest Jewish men to have post-secondary degrees. The decline is substantial: Eight-in-ten Jewish men in the oldest generation (81%) have post-secondary degrees, compared with about two-thirds (65%) in the youngest generation in the study – a 17-point decrease.

This analysis only includes, as Jews, people who identify religiously as Jewish. A previous Pew Research Center study found that a substantial share of U.S. Jews more broadly defined (about one-in-five) describe their religious identity as atheist, agnostic or “nothing in particular,” but nonetheless say they consider themselves Jewish in other ways. These “Jews of no religion,” who tend to be highly educated, are considered as religiously unaffiliated for the purposes of this study.

Next: 7. How religion may affect educational attainment: scholarly theories and historical background Next Page → ← Prev Page