Most people in Western Europe say they believe in God. But in Europe today, believing in God does not necessarily mean belief in the God of the Bible.

Indeed, even though all 15 countries surveyed are historically Christian, and nearly all of them still have Christian majorities, fewer respondents say they believe in God “as described in the Bible” than say they believe in “some other higher power or spiritual force.” And substantial numbers of people surveyed across the region do not believe there is any higher power or spiritual force in the universe.

The survey questions that mention the Bible do not specify particular verses, editions or translations, leaving that up to the understanding of respondents. But it is clear from other questions in the survey that people who say they believe in God as described in the Bible generally envision a deity who is all-knowing and all-powerful, and who loves all people and, ultimately, will judge all people. By contrast, respondents who say they believe in some other “higher power or spiritual force” – but not the God of the Bible – are much less likely to envision a deity with these characteristics. 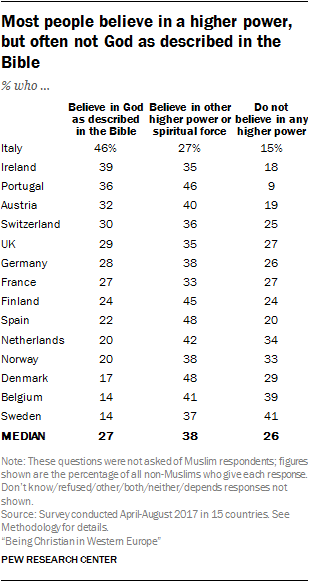 People in predominantly Catholic countries – especially Italy (46%), Ireland (39%) and Portugal (36%) – tend to have higher levels of belief in a biblical God than people in predominantly Protestant countries. But, still, belief in the God of the Bible is lower in all of these countries than in the United States, where most adults (56%) say they believe in God as described in the Bible.

In every Western European country surveyed, at least half of churchgoing Christians believe in God as described in the Bible, while those who are non-practicing tend to believe in some other higher power or spiritual force. 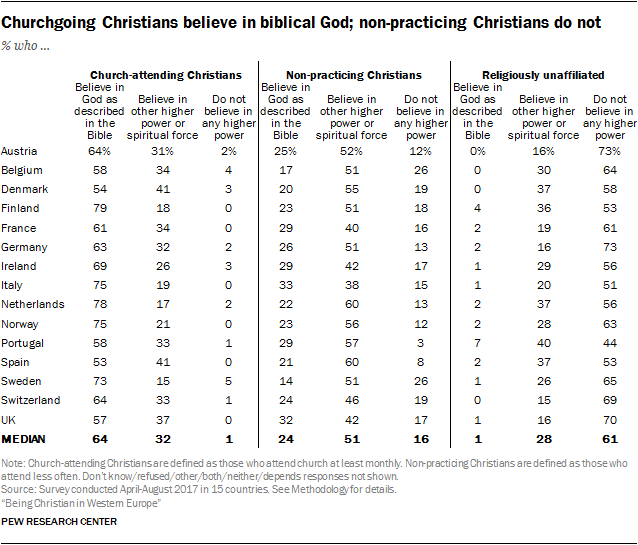 Religiously unaffiliated people generally say they do not believe in God or any higher power in the universe. Still, in several countries, considerable shares among the unaffiliated say they believe in some kind of spiritual force. (See Overview of this report for additional analysis of the opinions of “nones” who are believers.)

Those with less than a college education are more likely than college graduates to believe in a biblical God. For example, in the United Kingdom, 32% of adults who have not completed college believe in God as described in the Bible, compared with 23% of college graduates.

Relatively few believe that God is all-knowing and all-powerful 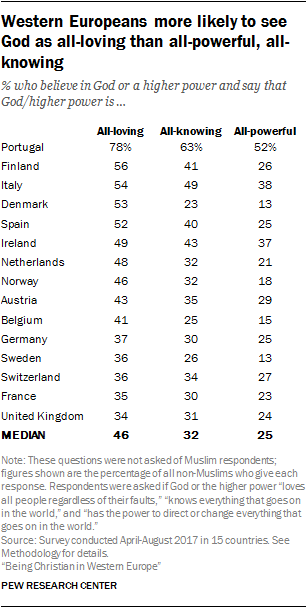 The survey also asked respondents who believe in God or a higher power about three traits that are often associated with the divine in Christianity: being all-loving, all-knowing and all-powerful. Overall, the view that God or another higher power has these characteristics is a minority belief in most countries across Western Europe. A median of just 14% across the region believe God has all three attributes.

Consistent with their higher levels of religious observance overall, Portuguese adults are the most likely in the region to believe that God has all three traits.

Of these three characteristics, the most widely believed is that God “loves all people regardless of their faults.” For example, in Denmark, roughly half (53%) of adults say they believe in an all-loving God, compared with 23% of Danes who say God “knows everything that goes on in the world” and 13% who say God “has the power to direct or change everything that goes on in the world.”

Young adults (under 35) and college graduates are less likely than older adults and people with less education to believe that God possesses these traits. For instance, 16% of college-educated Spaniards say God is all-powerful, while 28% of those who have less education believe this. 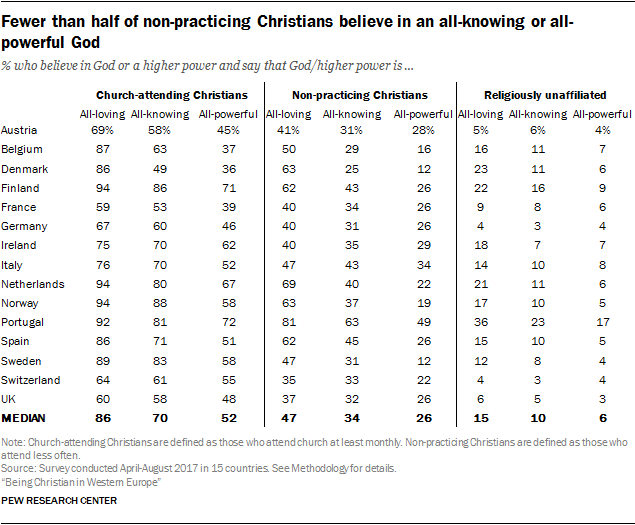 Indeed, few “nones” associate these traits with God, in large part because relatively few believe in a higher power to begin with. For example, just 6% of religiously unaffiliated adults in France say God is all-powerful. But in some countries, substantial shares of “nones” say they believe in an all-loving God or higher power, including about one-in-five in Denmark (23%), Finland (22%) and the Netherlands (21%).

Few in region say God will judge people for their deeds 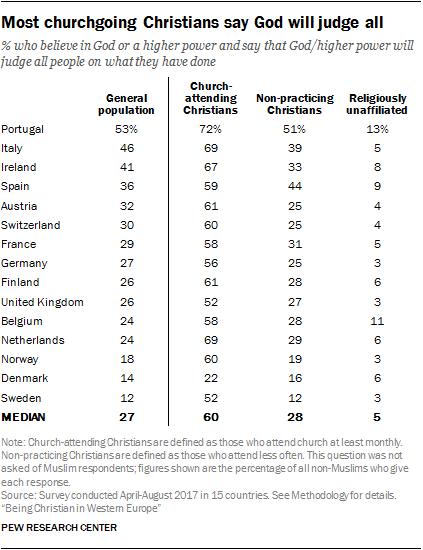 In most countries surveyed, fewer than a third of adults believe God will judge all people on their deeds (median of 27%). But individuals in several predominantly Catholic countries, including Portugal (53%) and Italy (46%), are more likely than others in the region to hold this belief.

Churchgoing Christians are much more likely than those who are non-practicing to think God will act as judge. And very few religiously unaffiliated people believe in a God or higher power that will judge all people for their deeds.

Throughout the region, younger adults (ages 18 to 34) and college graduates are less likely than individuals who are older and have less education to say God will judge all people.

Generally, Western Europeans are considerably more likely to believe in an all-loving God or higher power than a judgmental one (medians of 46% vs. 27%). 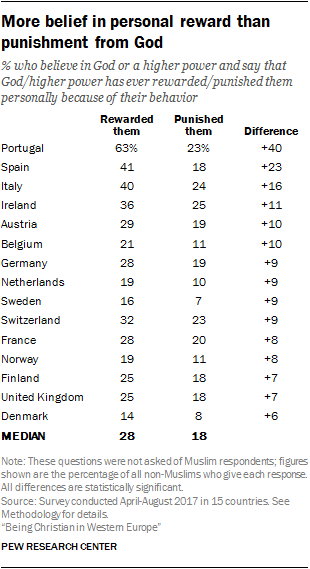 Differing conceptions of God or a higher power

Participants in focus groups in five Western European countries shared descriptions and characteristics that they associate with God or a higher power. The focus groups were composed either entirely of Christians or entirely of religiously unaffiliated people. This conversation began with a word association exercise where everyone was asked to either draw or write what comes to mind when hearing the word “God.” In both kinds of focus groups, many participants talked about their idea of a supreme being or higher power. But their descriptions varied and were split mostly on religious lines. Christian participants generally used the word “God” or a male pronoun and spoke about characteristics often associated with God in the Bible – a powerful deity who is all-knowing and all-seeing – while many religiously unaffiliated adults said they do not believe in God at all. However, these patterns were not unanimous; a few Christians expressed doubts about God or described the deity in a more abstract manner, while several religiously unaffiliated adults mentioned belief in either a biblical God or a more abstract power, such as a source of balance in the universe or a force connecting all living things.

“Accepting, peaceful and forgiving … I think that’s what I take from the Bible, and I think that’s what he asks of us. So I’m assuming, it’d be a bit arrogant if he wasn’t like that himself, wouldn’t it? So I think that would be his characteristics.”
– 39-year-old Christian man, United Kingdom

“Every time I picture God, I think of this massive person with this huge great beard.”
– 34-year-old Christian man, United Kingdom

“I would say a patriarch too, who watches over all his sheep. It’s what we were taught.”
– 25-year-old Christian man, France

“Higher power, and by that I mean something along the lines of ‘energy.’ And more like a guardian angel. … To me, God is also not just one, but several. When I pray, I rather pray to my guardian angels that surround me, rather than praying directly to God.”
– 53-year-old Christian woman, Germany

“[The] characteristics of God are moss on a crisp Sunday morning in a park under your feet and there’s nobody else around; it’s gorgeous.”
– 35-year-old “nothing in particular” man, United Kingdom

“For me it is kindness. Goodness in the broadest sense of the word: good. And then, as I’m very fond of the family, I think it’s a superfather. … He’s there when you need it, he will forgive you for what you do wrong, will let you be free if you want to, and is never going to reprimand you at all. He will explain, and nothing more.”
– 67-year-old Christian man, Spain

“It’s the concept of a panoramic view. He is above everybody.”
– 34-year-old Christian man, France

“So for the drawing of God, I didn’t really know how to draw it because I guess my idea would be that God is outside matter, space and time, so it’s not a physical thing, like people were saying, so I just did a squiggle. But what are the qualities?  I said it’s uncertain and we can’t really know much about it because it’s beyond our kind of understanding.”
– 20-year-old agnostic man, United Kingdom

“[I wrote] ‘Him or her in heaven!’ Very stylistic picture, not strictly traditional, a little Whoopi Goldberg, if you are going to picture God.”
– 30-year-old agnostic man, Sweden

“I’m very science- [and] evidence-based. … I don’t necessarily think all Christians genuinely believe that there is a man sitting in the clouds in the sky that created the planet. I think it’s that sense of willing, of wanting to believe in something bigger, as opposed to it being a being. Because I think a lot of the Christians that I would speak to don’t necessarily talk about God as a creator.”
– 32-year-old “nothing in particular” woman, United Kingdom

“I think that man created this concept of God.”
– 57-year-old “nothing in particular” man, France

“Of course, people should be able to believe in what they want, and then it is up to them if it is spiritual, or if it is God, or whatever. But for me, it just doesn’t exist. For me it’s not logical — in my head it’s just not logical. I haven’t experienced anything, maybe if I would experience something, then I would say it, but not quite. But one can always change.”
– 26-year-old atheist woman, Sweden

“I quite like science. I just can’t believe there’s one – or more than one – god at the moment that has created everything in the universe, based on science today.”
– 30-year-old atheist man, United Kingdom

“I’d really love to believe, as I see how much it helps many people. I can see the help it can bring. Unfortunately, it never did so for me. And, for me, God is just a story.”
– 32-year-old Christian woman, France

For details on the focus groups, including locations and composition, see Methodology.

Few in the region say God communicates with them daily 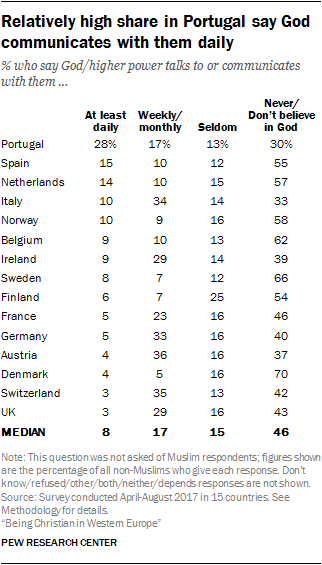 In other countries, such as Belgium, Denmark and Sweden, lower shares say they have monthly communications with God or a higher power. And across most of the region, very few people say God communicates with them on a daily basis, although in Portugal, more than a quarter of adults (28%) say this. 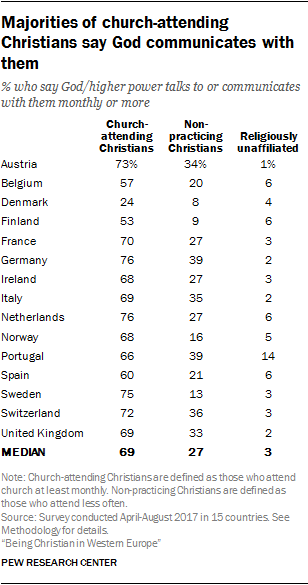 People who believe in a biblical God generally say God is all-loving, all-knowing and judging 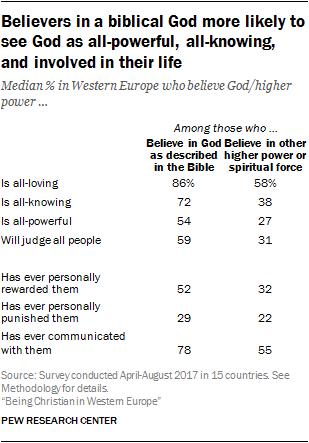 Overall, an image of an omnipotent and omniscient God is more commonly held by people who believe in a biblical description of God than by those who say they believe in some other kind of higher power or spiritual force. A regional median of 54% of those who believe in God as described in the Bible say God is all-powerful, compared with a median of 27% among those who express belief in some other higher power. A similar pattern is seen on the questions about whether God is omniscient (medians of 72% vs. 38%), loves all people (86% vs. 58%) or will judge all people (59% vs. 31%).

Believers in a biblical God are also more likely to say they have had personal interactions with God. Those who believe in God as described in the Bible are more likely than other believers to say God has rewarded them (52% vs. 32% medians) or regularly communicates with them (78% vs. 55%).

Next: 5. Attitudes toward spirituality and religion Next Page → ← Prev Page