2. Harassment of religious groups steady in 2017, remaining at 10-year high 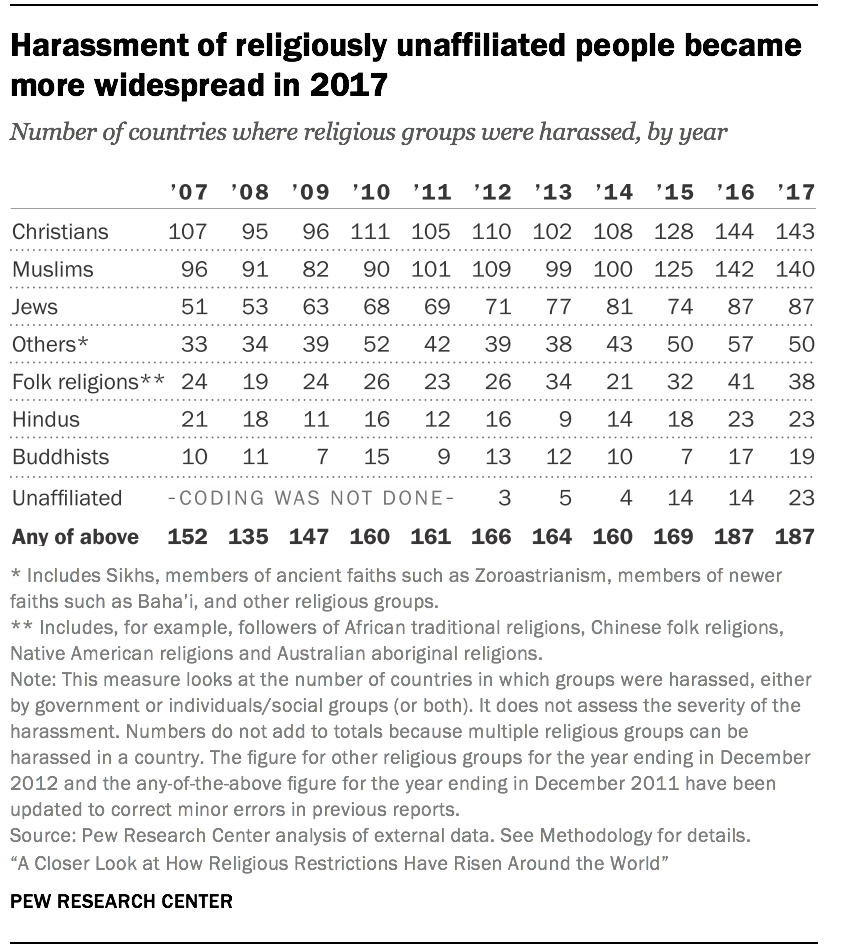 In 2017, harassment against religious groups – either by governments or individuals and groups in society – was reported in 187 countries by this study’s sources (see Methodology for details). This figure remained the same from the previous year, matching the highest level since the study began in 2007.

Harassment entails an offense against a religious group or person due to their religious identity, and can include being physically coerced or singled out with the intent of making life or religious practice more difficult. The severity ranges from verbal or written harassment to physical violence and killings.

Christians and Muslims typically have been targeted in the largest number of countries since the beginning of the study. They also are the two largest religious groups in the world, and, compared with smaller groups, are geographically dispersed across a greater number of countries in substantial numbers.

In 2017, Christians reportedly were harassed in 143 countries, declining slightly from 144 countries in 2016. In China, for example, the government ramped up efforts to arrest and deport Christian missionaries. There were more frequent reports of authorities in northeastern provinces of the country detaining missionaries and confiscating their electronic devices.93

Muslims were harassed in 140 countries in 2017, down from 142 countries in 2016. In Indonesia – a Muslim-majority country – Muslim minority groups such as Shiites and Ahmadis reported that they faced difficulties in applying for national identity cards when applying as Muslims, which prevented them from accessing public services such as marriage licenses or health care.94

Jews were harassed in 87 countries – steady since 2016, and still the third-largest number of countries of any religious group despite Jews’ relatively small population size. In Sweden, for instance, there was a reported increase in violence against Jewish targets in 2017, even though there was a decline in the overall share of hate crimes with suspected anti-Semitic motives. In the city of Gothenburg, a group of people wearing masks threw flaming objects at a synagogue in December. The prosecutor in the case said the attack was a reaction to unrest in the Middle East over the recognition of Jerusalem as the capital of Israel by the United States. In the same month, a Jewish cemetery was attacked with Molotov cocktails in the city of Malmo.95

Hindus continued to be harassed in 23 countries – the same number as the previous year. In Uzbekistan, for example, government authorities raided the home of a Hare Krishna member, seizing religious booksfrom the home and issuing a fine for a violation of policies restricting religious literature.96

Buddhists experienced a slight increase in the number of countries where they faced harassment, from 17 in 2016 to 19 in 2017 – the highest number since the study began in 2007. In Bangladesh, there were attacks on Buddhist monks, including one in the Jessore District and another in Chittagong.97

Religiously unaffiliated people (including atheists, agnostics and people who don’t identify with any religion) were harassed for religious reasons in 23 countries in 2017, up from 14 the previous year – the biggest increase of any group. In Malaysia, for example, the government declared atheism to be unconstitutional. And in August, authorities began investigating a meeting of atheists in Kuala Lumpur.98

Some groups face more harassment from governments, while others are more often harassed by individuals or groups in society. For example, in 2017, Buddhists, Christians, Hindus and Muslims experienced harassment by governments in more countries than they did by private individuals or groups. By contrast, Jews have faced more social harassment than government harassment since the baseline year of the study. This pattern continued in 2017, when social hostilities against Jews were reported in 75 countries, compared with 63 countries where Jews experienced some form of government harassment – although both numbers increased from 2016.

Adherents of folk religions also faced more widespread social hostilities than government harassment in 2017 (27 countries vs. 16). In Tanzania, for example, vigilantes killed women they said were practicing witchcraft.99 And in Haiti, practitioners of Voodoo (known as Vodou in that country) reported facing social stigma for their beliefs.100

Other religious groups beyond those separately analyzed above – including Baha’i, Scientologists, Sikhs, Rastafarians and Zoroastrians – experienced government harassment in 43 countries, compared with 21 countries where they faced social hostilities. In Malawi, Rastafarian children with dreadlocks were prevented from attending some public schools.101 And several countries (including Jordan) continued to deny official recognition to the Baha’i faith, while others (such as Iraq) prohibit practicing the faith.102 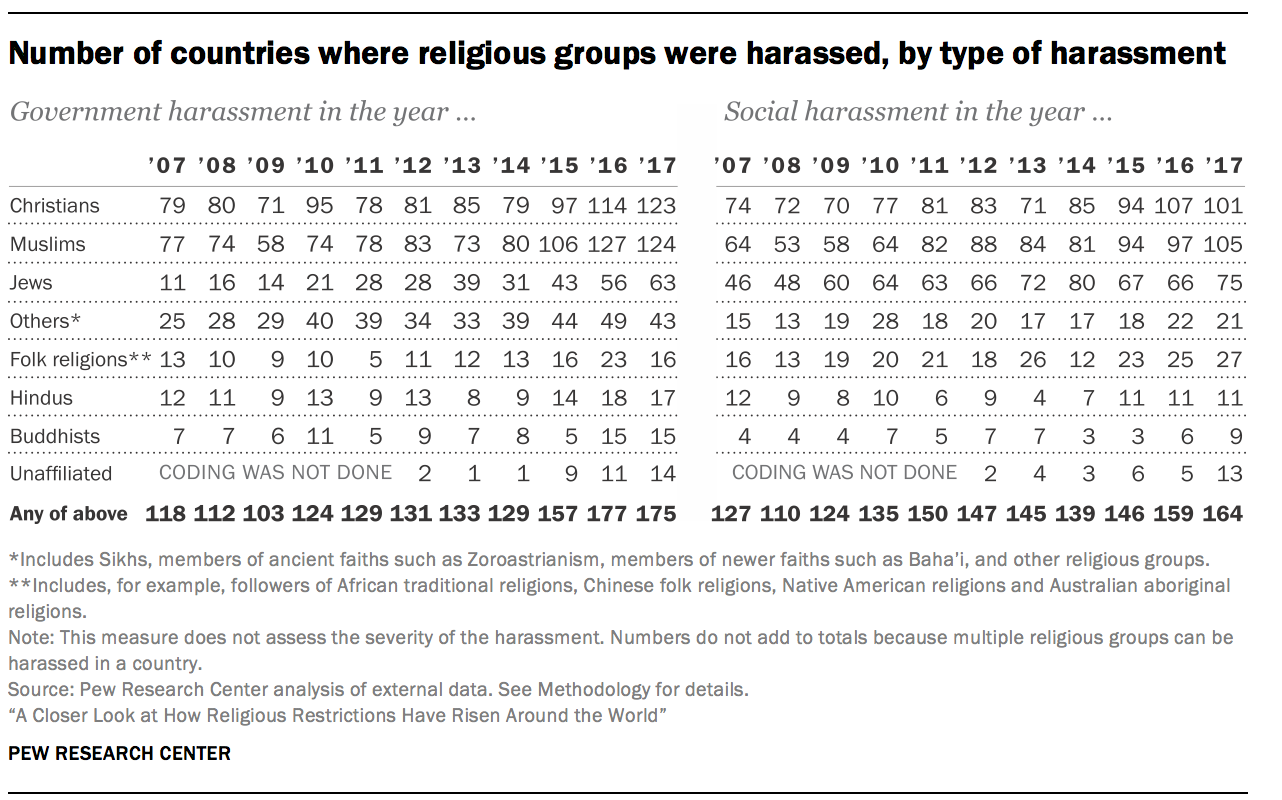 Looking at the two largest religious groups shows there also are regional variations in where they are more likely to face harassment. The Middle East-North Africa region had the highest share of countries where Christians were harassed. All 20 countries in the region had some form of harassment (either by governments or social groups) directed at Christians in 2017. Government harassment of Christians was reported in all countries in the region, while social harassment occurred in 60% of countries. For example, in Morocco, two foreigners were deported for encouraging conversions to Christianity and distributing religious materials.

Next: 3. Middle East still home to highest levels of restrictions on religion, although levels have declined since 2016 Next Page → ← Prev Page