1. Number of countries with ‘very high’ government restrictions on religion remains at highest levels since 2007

Four countries – Comoros, Pakistan, Sudan and Vietnam – had increased levels of government restrictions in 2017 that led them to join the “very high” category. This is Comoros’ first time in this top category: Comoros’ increase in score (from 6.3 in 2016 to 7.4 in 2017) was due in part to statements by the country’s leadership targeting Shiite Muslims in the country. During a speech in July 2017, President Azali Assoumani compared Shia Islam to “fringe extremist sects” and asserted that the practice of religions other than Shafi’i Sunni Islam would not be tolerated. And in September, one of the country’s three vice presidents vowed to “completely eradicate Shiism from the country.”86 Pakistan, Sudan and Vietnam have been in this top category multiple times in previous years.

Two countries or territories – Iraq and Western Sahara – fell out of the “very high” category (although both maintained “high” levels of government restrictions). Both had small score decreases of less than 1.0 point in 2017. For a complete list of all countries in each category, see the Government Restrictions Index table in Appendix A.87 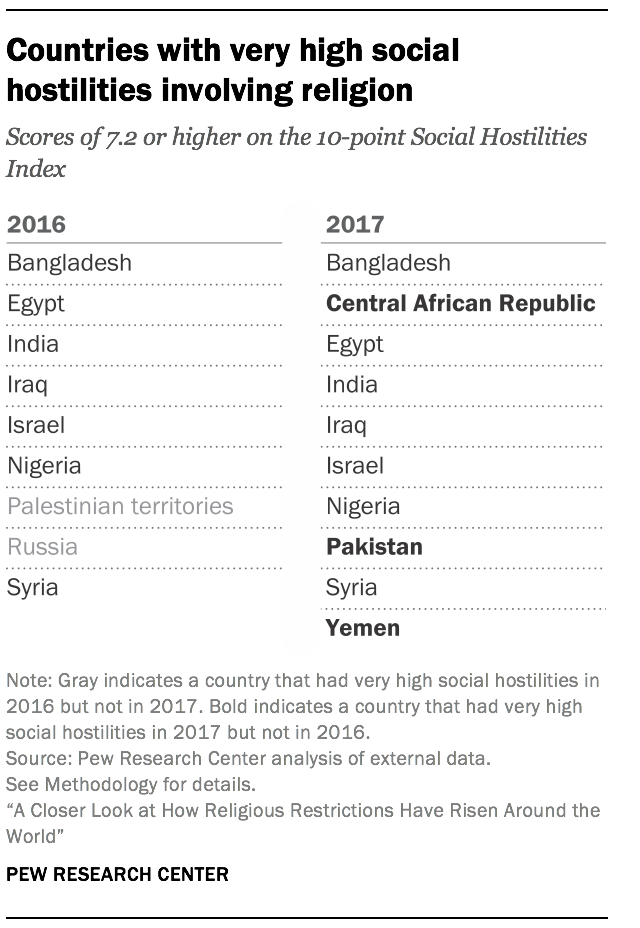 Similarly, each year some countries stand out for having the highest levels of social hostilities involving religion. These hostilities can include violence by individuals or social groups targeting religious groups or enforcing religious norms, religiously motivated terrorism, or sectarian and communal violence (see Overview).

In 2017, 10 of the 198 countries in this study fell into the top category of “very high” levels of social hostilities involving religion. This marks an increase from nine countries in 2016, and reverses the decrease seen from 2015 to 2016.

Three countries – Central African Republic, Pakistan and Yemen – had scores that caused them to rise into the “very high” category in 2017, although each had small increases of less than 1.0 point.

Meanwhile, the Palestinian territories and Russia fell out of this top category in 2017, with score decreases that put them in the “high” category instead. In Russia, there were fewer reports of sectarian violence and violence targeting members of religious groups than in 2016. And in the Palestinian territories, there were no reported incidents of hostility over conversion (in contrast with previous years), and, similar to Russia, fewer incidents of violence targeting religious groups.

For a complete list of all countries in each category, see the Social Hostilities Index table in Appendix B.88 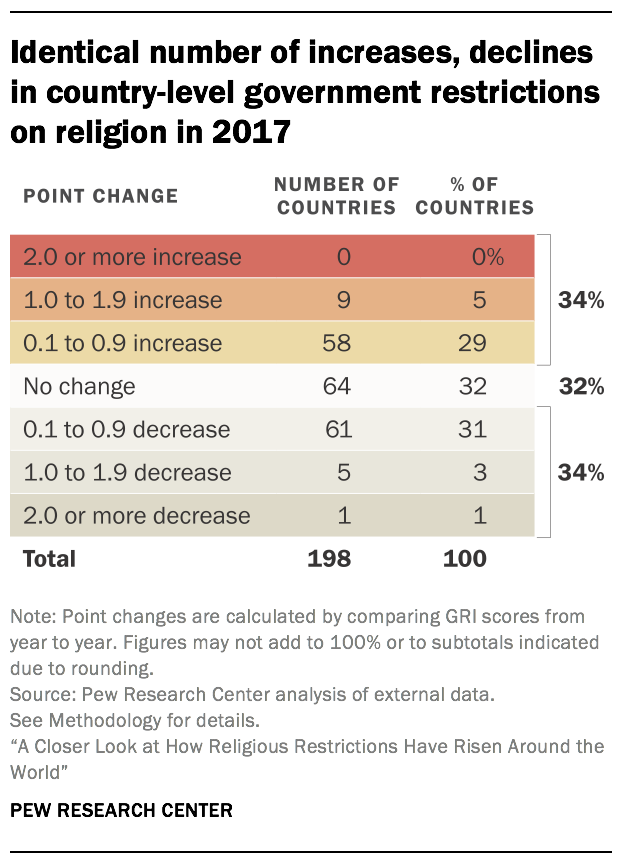 Some countries experience changes in their level of government restrictions that do not put them in the “very high” category but are nonetheless substantial. For this reason, Pew Research Center analyzes the magnitude of changes across all countries and categories to provide greater insight into the ways government actions and policies can have an especially large impact on religious restrictions each year.

Unlike 2016, when Gambia was the only country to experience a large increase (2.0 points or more) in its GRI score, it was the only country to see a large decrease in score in 2017. This reversal was due in part to President Adama Barrow’s announcement that Gambia would become a secular republic once again, in accordance with its constitution. In late 2015, former President Yahya Jammeh had proclaimed Gambia an Islamic state.89 No countries had large increases in GRI scores in 2017.

Fourteen countries saw modest changes (1.0 to 1.9 points) in their GRI scores, with nine of those countries registering increases and five having decreases. One of the increases occurred in the Netherlands, where religious leaders reported that religious organizations had been barred from proselytizing at asylum centers.90 And in the Republic of the Congo, which had a decrease in its GRI score, there were fewer reported incidents of government harassment in 2017.

Most countries (119 out of 198) experienced only small changes (less than 1.0 point) in their GRI scores. Nearly equal numbers had increases (58) and decreases (61). 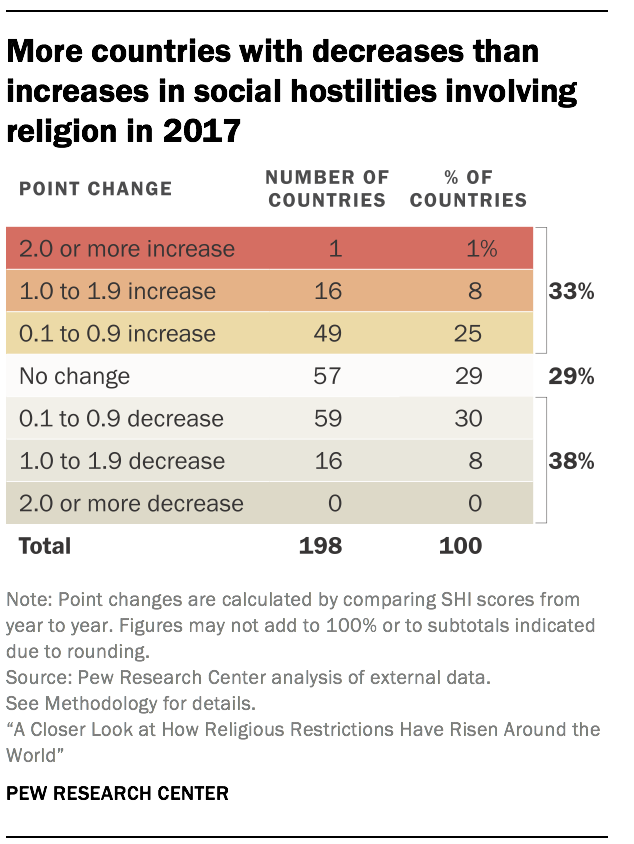 Mali was the only country in 2017 to experience a large change (2.0 points or more) in social hostilities, rising from the “moderate” category to the “high” category. Some of this increase was due to several incidents of religious groups attempting to prevent other religious groups from operating. For example, the Malian Episcopal Conference reported multiple incidents of harassment, including in August, when suspected members of a militant Islamist group forced Christians to remove the bell from their church.91

Thirty-two countries registered modest changes in SHI scores (1.0 to 1.9 points), including 16 increases and the same number of decreases. In Bulgaria, where social hostilities involving religion were on the rise, physical assaults against Jehovah’s Witnesses and Latter-day Saints (also known as Mormons) continued, and there were additional reports of attacks on Muslims in 2017. For example, in June, a Muslim cleric’s wife (who was wearing a head scarf) and daughters were physically and verbally attacked by two teenage girls in a supermarket parking lot. In addition, Protestant pastors reported being harassed by Orthodox Christian priests, unlike in the previous year.92 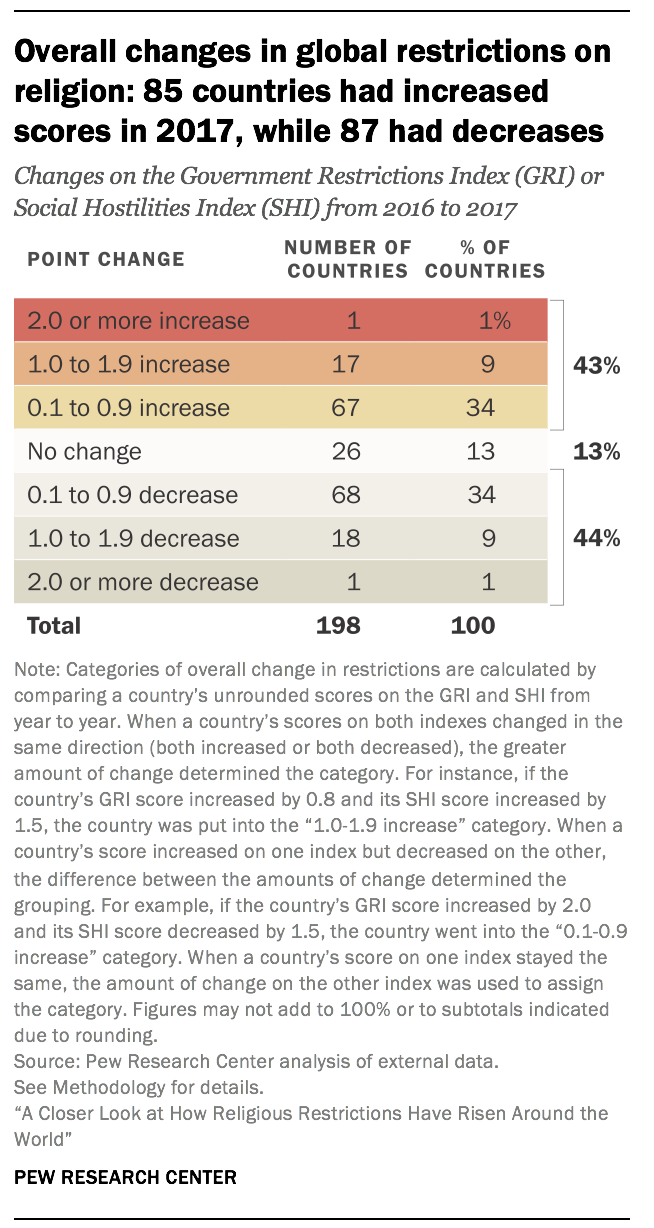 Twenty-six countries had no change in their overall scores between 2016 and 2017.

Next: 2. Harassment of religious groups steady in 2017, remaining at 10-year high Next Page → ← Prev Page