Demographic characteristics also are associated with religious knowledge. Men perform better on the survey than women, whites do better than blacks and Hispanics, and older people score higher than younger people.

This chapter examines differences in knowledge about religion first by education and then by other demographic traits and social connectedness. 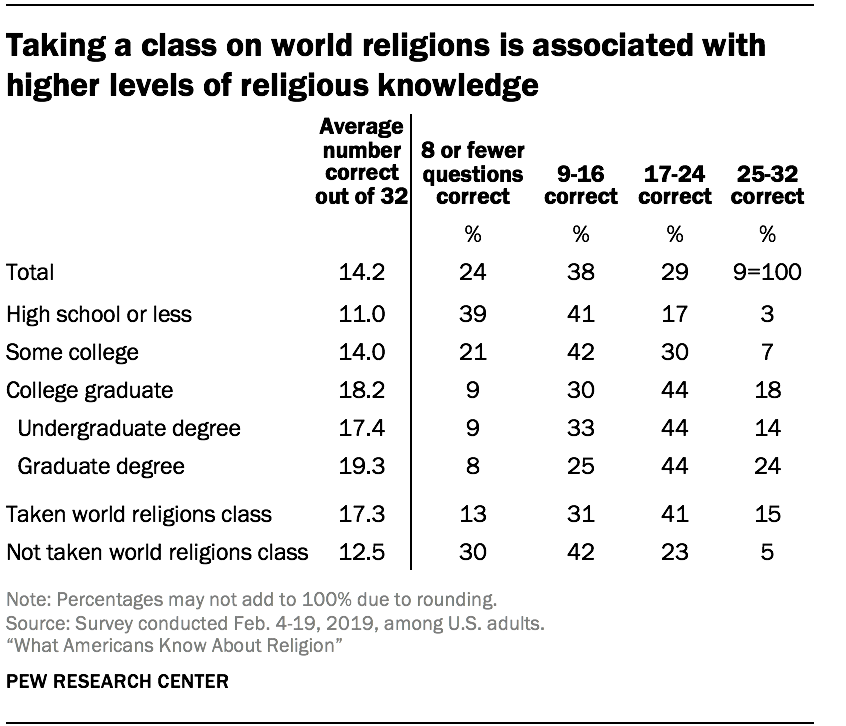 People with higher levels of education tend to be more knowledgeable about religion. College graduates get an average of 18.2 out of 32 religious knowledge questions right, including 18% who answer 25 or more correctly. Within this group, people who have a postgraduate degree do especially well, averaging 19.3 out of 32 questions correct, including one-quarter who answer at least 25 questions right (24%).

Scores are lower among respondents with less education. Among people who have some college experience, the average number of correct answers is 14.0. Those who have a high school diploma or less education get 11.0 questions right, on average. 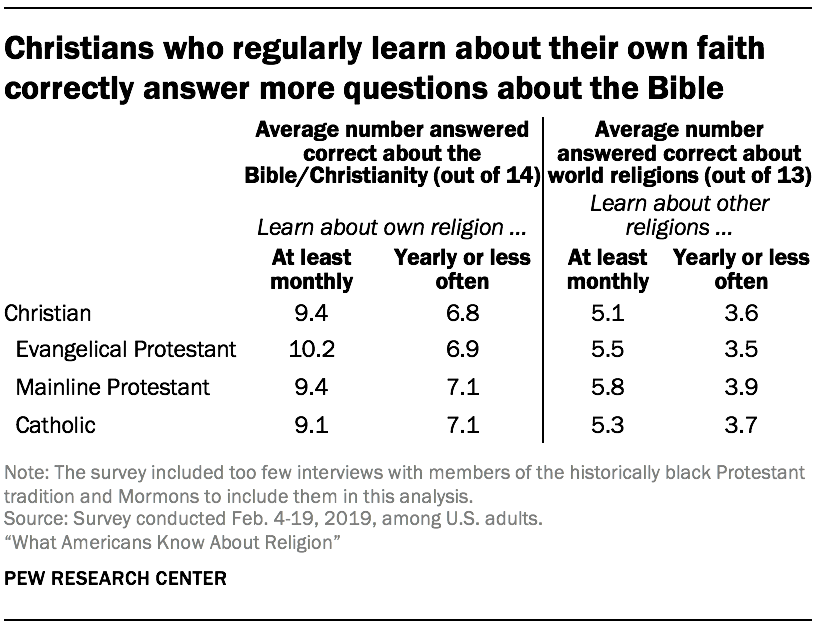 The survey included several other questions that explore how Americans may have learned what they know about religion. Christians who say they regularly engage with material about their own faith – be it scripture, websites, podcasts, books, magazines or television – correctly answer more questions about the Bible and Christianity than those who do this less often (9.4 out of 14, on average, vs. 6.8). Similarly, evangelical Protestants who do things to learn about their religion at least once a month give right answers to roughly three more questions about the Bible and Christianity, on average, than other evangelical Protestants do (10.2 vs. 6.9).

And Christians who spend time learning about religions besides their own at least once a month tend to know more about world religions than do Christians who engage with material about other religions less often. 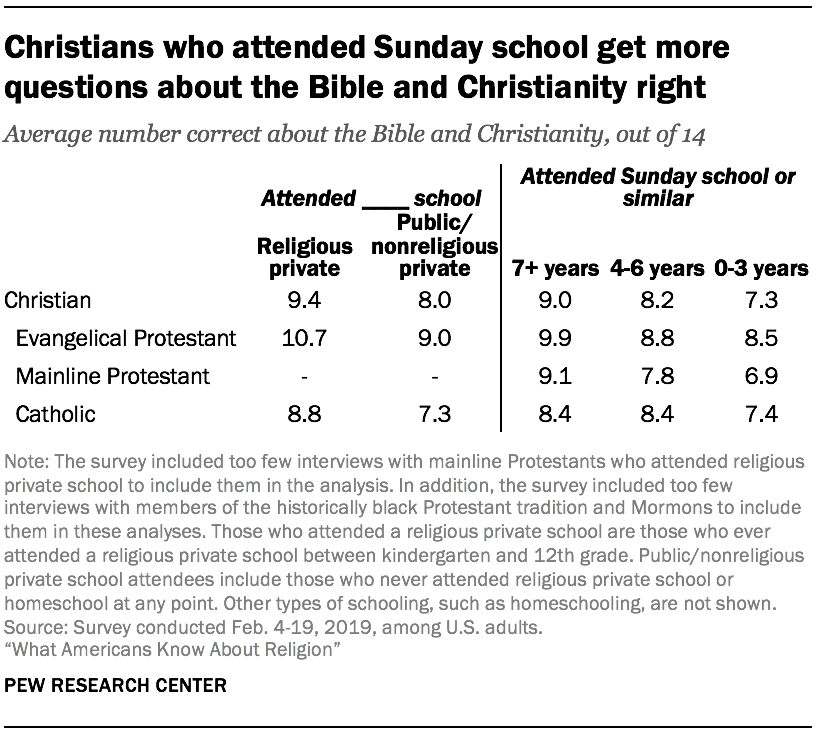 The survey sought to explore whether respondents who say they know a lot about religion actually get more religious knowledge questions right. It included a battery of questions asking respondents how much they personally know about evangelical Christianity, Catholicism, Mormonism, Judaism, Islam, atheism, Buddhism, Hinduism and mainline Protestantism – “a lot,” “some,” “not much” or “nothing at all.” The survey shows that knowing “a lot” about many religions is associated with answering more questions right about the Bible and Christianity and world religions, as well as getting more religious knowledge questions right overall – even after religious affiliation and other demographic characteristics are taken into account. 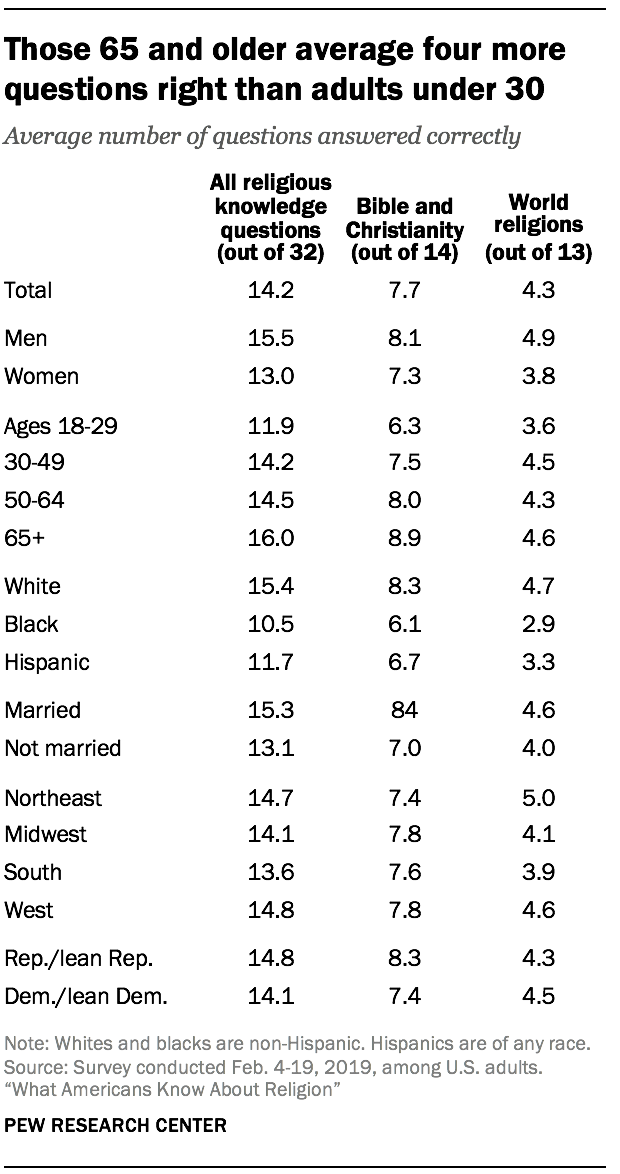 Gender, race and ethnicity, age, and marital status also are associated with differing levels of religious knowledge. For instance, Americans ages 65 and older correctly answer 16.0 questions, on average, while adults under 30 get fewer questions right (11.9). And whites get an average of 15.4 questions right, compared with 10.5 among black adults and 11.7 among Hispanics.

Politically, Republicans and those who lean toward the Republican Party (14.8 questions right, on average) score slightly higher than Democrats and Democratic leaners (14.1). This is mainly because Republicans do slightly better than Democrats on the survey’s questions about Christianity and the Bible (8.3 right, on average, among Republicans vs. 7.4 among Democrats). However, differences in levels of religious knowledge by party identification disappear after controlling for other factors more closely associated with religious knowledge (see Chapter 3).

Similarly, while people living in the West (14.8) and Northeast (14.7) score higher, on average, than those who live in the South (13.6), these differences also disappear after controlling for other factors. 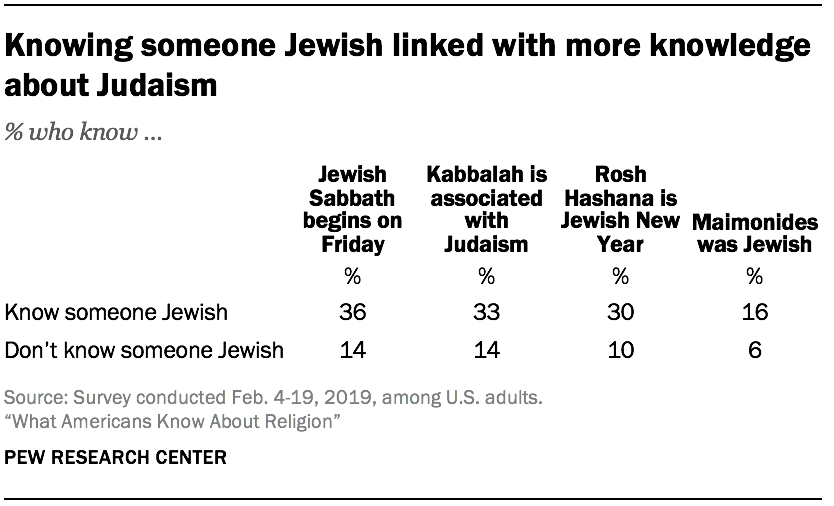 The survey included a set of questions that asked respondents whether they personally know someone who is an evangelical Christian, Catholic, Mormon, Jewish, Muslim, atheist, Buddhist, Hindu or mainline Protestant. Across the board, knowing someone who identifies with one of these religions is correlated with knowing more about that religion.

Similar patterns exist when it comes to knowing someone who is Hindu, Buddhist or atheist, and correctly answering questions about these topics. 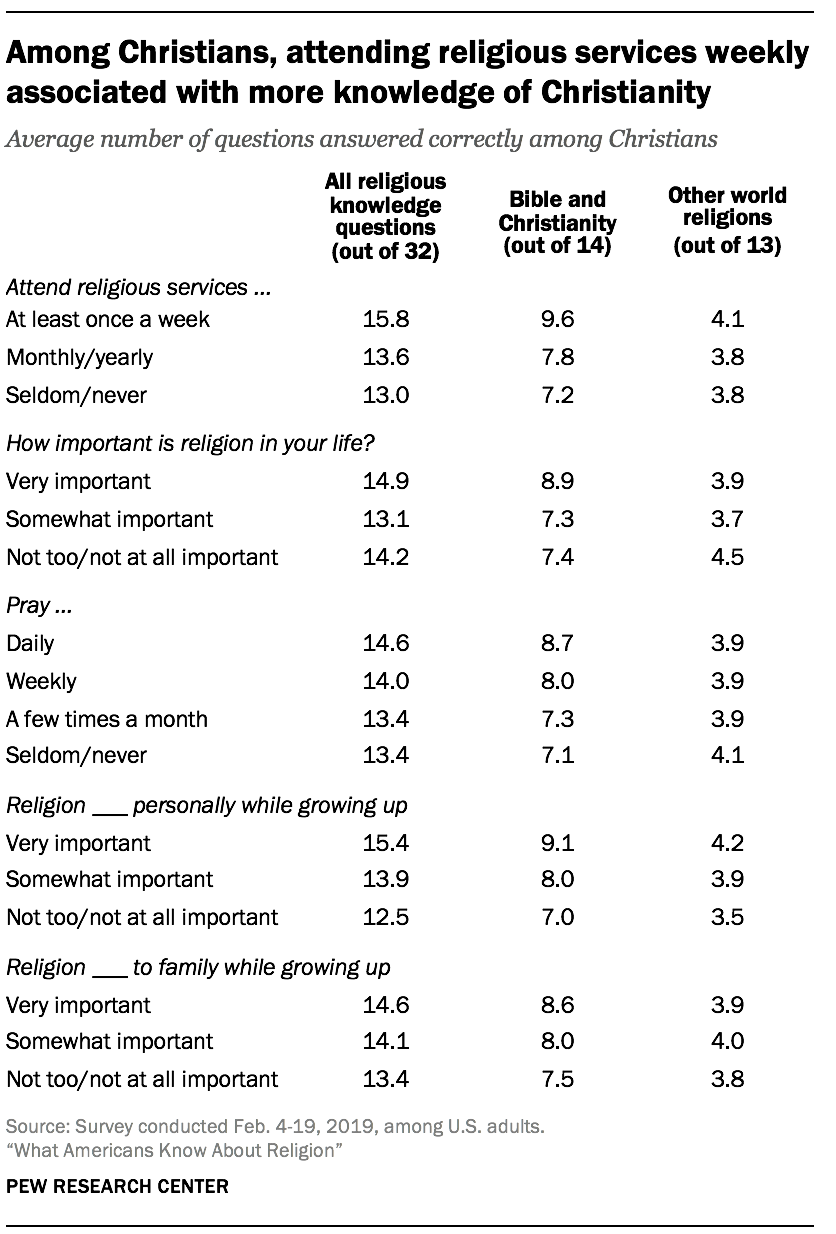 Does being highly engaged in one’s own religion increase overall levels of religious knowledge? For Christians, the answer appears to be yes.

The survey asked respondents several questions about religious commitment, including how often they attend religious services, how important religion is in their lives, and how often they pray. Christians who are religiously observant (that is, those who attend religious services at least weekly, pray daily, or say religion is very important in their lives) earn higher scores on the survey’s questions about the Bible and Christianity than Christians who do these things less often.

The survey included too few interviews with members of non-Christian faiths (Jews, Muslims, Buddhists, Hindus and others) to permit analysis of whether their levels of involvement with their respective faiths are correlated with religious knowledge.

Next: 3. How strongly are religious, social and demographic factors linked with religious knowledge? Next Page → ← Prev Page