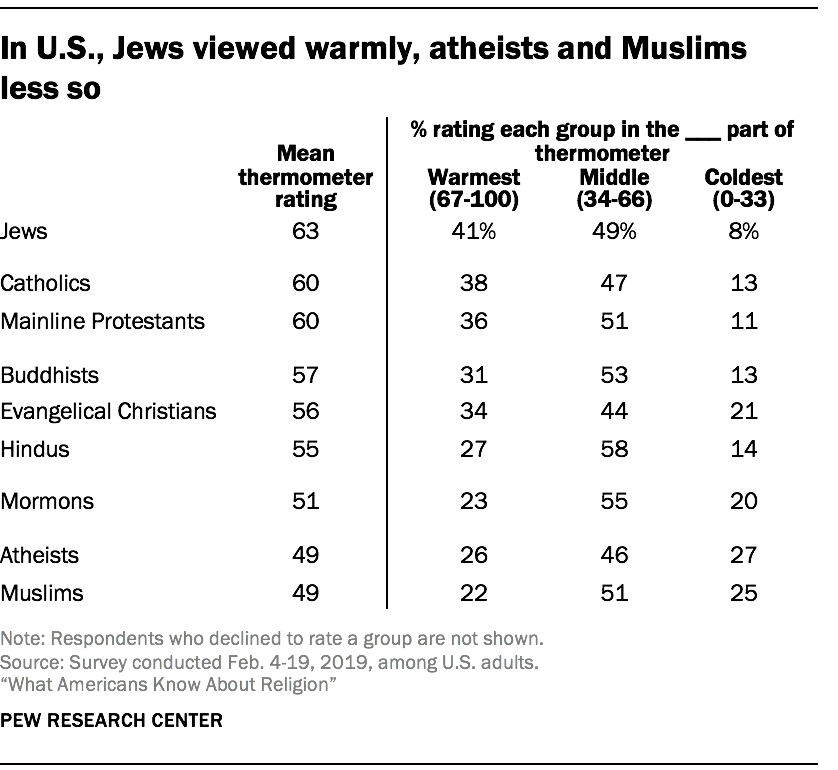 The survey included some questions designed to see whether higher levels of religious knowledge tend to go hand in hand with more positive attitudes toward various religious groups.

Overall, the answer is “yes.” In general, respondents who are highly knowledgeable about a religious group tend to express relatively warm feelings toward that group, and respondents who are most knowledgeable about religions overall tend to express relatively warm feelings toward a variety of religious groups. There are, however, some exceptions to this pattern, which are outlined below. And of course, the causal arrow also could go in the other direction – a person who feels warmly toward a religious group may be more likely to learn more about that group.

In the U.S., no major religious group is viewed more warmly by the overall public than Jews. When asked to rate a variety of groups on a “feeling thermometer” ranging from 0 (coldest and most negative) to 100 (warmest and most positive), Americans give Jews an average rating of 63 degrees, and four-in-ten people rate Jews in the warmest portion of the scale (at 67 degrees or higher).

Several other religious groups also receive ratings that are, on balance, more warm than cold. Catholics and mainline Protestants each receive an average rating of 60 degrees, followed closely by Buddhists (57 degrees), evangelical Christians (56 degrees) and Hindus (55 degrees). All of these groups receive more ratings at the warmest end of the scale (67 or higher) than at the coldest end of the scale (33 or lower).

The remainder of this chapter assesses the link between familiarity with (as well as knowledge about) religious groups and feelings (warmth or coldness) toward those groups. The analyses that follow exclude members of the group being rated; that is, they assess the views that non-Catholics have of Catholics, the views that non-Muslims have of Muslims, etc.

Familiarity with a religion leads to more favorable views 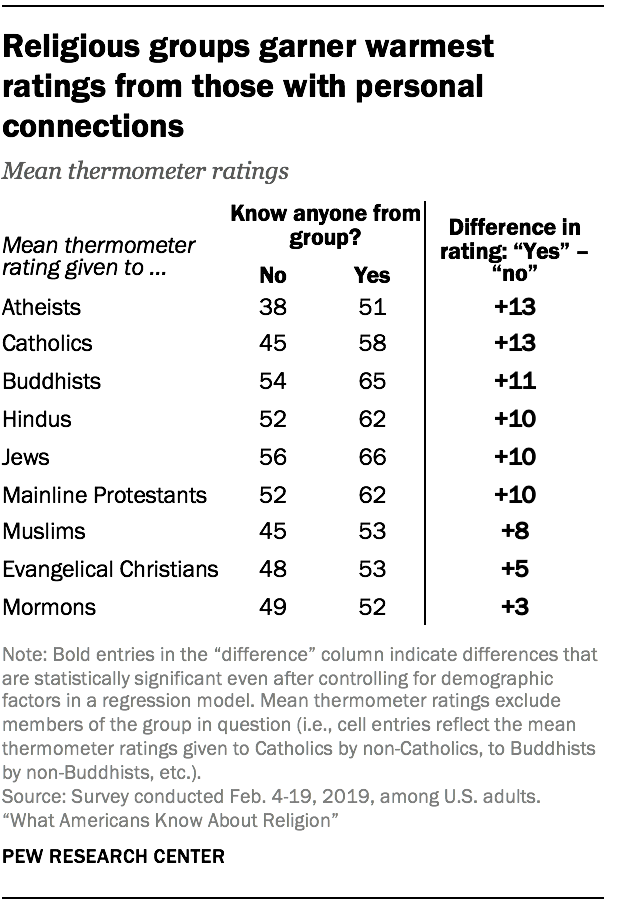 People who are more familiar with a religion tend to express more favorable views of members of that faith. The survey makes this clear in a couple of ways. First, those who say they personally know someone from a religious group express warmer views of that group.

Those who know a Mormon rate Mormons just 3 degrees more warmly than those who do not know anyone who is Mormon. Nevertheless, the general pattern (warmer ratings from those who know a member of the group) holds for all religions measured in the survey, even after controlling for other factors associated with the thermometer ratings of religious groups (including education, age, sex, respondent’s own religious affiliation, etc.).

The survey also finds that those who are most knowledgeable about a religion – as measured by the survey’s knowledge questions – tend to rate the religion’s adherents most favorably. For instance, Buddhists receive an average thermometer rating of 67 degrees from non-Buddhists who correctly answer both of the survey’s Buddhism-knowledge questions, but just 53 degrees from those who answer neither question about Buddhism correctly. 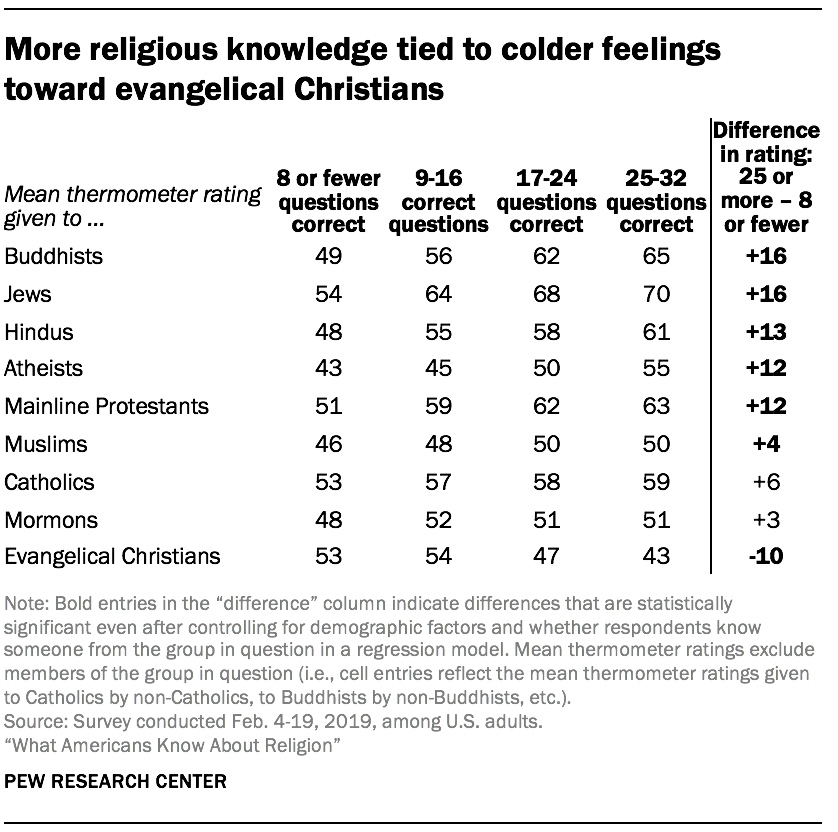 Similarly, the average thermometer rating given to Hindus is 11 degrees warmer among non-Hindus who answer both of the survey’s Hinduism-knowledge questions correctly than among those who answer neither of the Hinduism questions correctly. Jews and atheists also are rated more warmly by those most knowledgeable about Judaism and atheism.

However, the differences in ratings of Catholics and Muslims are not statistically significant once other factors associated with thermometer ratings, including a variety of demographic traits, are taken into account. (The survey included just one quiz question directly related to Mormonism and no questions specific to evangelical or mainline Protestantism, so it is not possible to assess the link between knowledge of those faiths and their resulting thermometer ratings.)

Similarly, those who correctly answer more religious knowledge questions overall tend to express warmer feelings towards most religious groups of which they are not a part. For example, Jews receive an average thermometer rating of 70 degrees from non-Jews who correctly answer at least 25 of the 32 religious knowledge questions. By comparison, Jews are rated at 54 degrees among those who get eight or fewer questions right.

One notable exception to this pattern is evangelical Christians.19 Respondents who answer at least 25 religious knowledge questions rate evangelicals more coolly (43 degrees, on average) than those who correctly get eight or fewer questions right (53 degrees). The survey also shows little connection between overall levels of religious knowledge and views of Mormons and Catholics, once demographic factors are taken into account.