1. Which religious groups know what about religion? 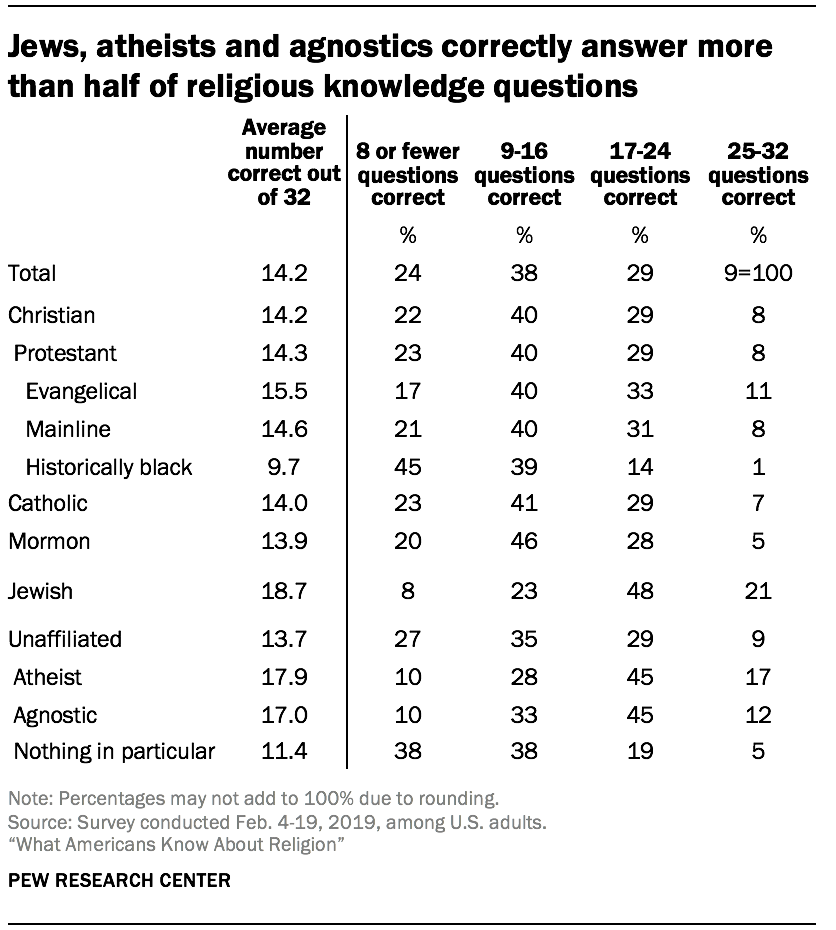 Based on religious affiliation (or lack thereof), the groups that display the highest levels of religious knowledge on this survey include Jews (who get an average of 18.7 out of 32 questions correct), self-described atheists (17.9) and self-described agnostics (17.0). Looked at another way, seven-in-ten Jewish respondents (69%) answer at least half of the questions correctly, and 21% correctly answer at least 25 of the 32. More than six-in-ten atheists (62%) answer more than half of the survey’s religious knowledge questions correctly, including 17% who get more than three-quarters right.

Evangelical Protestants also answer an above-average number of questions correctly (15.5, compared with 14.2 among all respondents). Mainline Protestants, Catholics and Mormons closely resemble the general public in their overall levels of religious knowledge, getting between 13.9 and 14.6 questions correct on average.

These overall patterns in scores among religious groups hold true even after controlling for levels of education and other key demographic characteristics such as race, age and gender.15

The remainder of this chapter analyzes religious knowledge among different religious groups within key subject areas including the Bible, Christianity, elements of Judaism, knowledge of other world religions, atheism and agnosticism, and religion in public life.

Knowledge of the Bible

Compared with Moses, David and Abraham, Esther is less well-known. Just 28% of U.S. adults correctly identify her as the woman who saved the Jews from murder by appealing to King Ahasuerus. Two-thirds of Jews get this question right, far exceeding the performance of every other religious group on this question. Jews read the Book of Esther (also called the Megillah) and commemorate her feat during the annual holiday of Purim.

When it comes to the New Testament, 56% of U.S. adults know that according to the Bible, Jesus lived in Nazareth (not Bethlehem, Jerusalem or Jericho) during his childhood and young adulthood. And half of the public knows that the Sermon on the Mount was given by Jesus (not Peter, Paul or John). 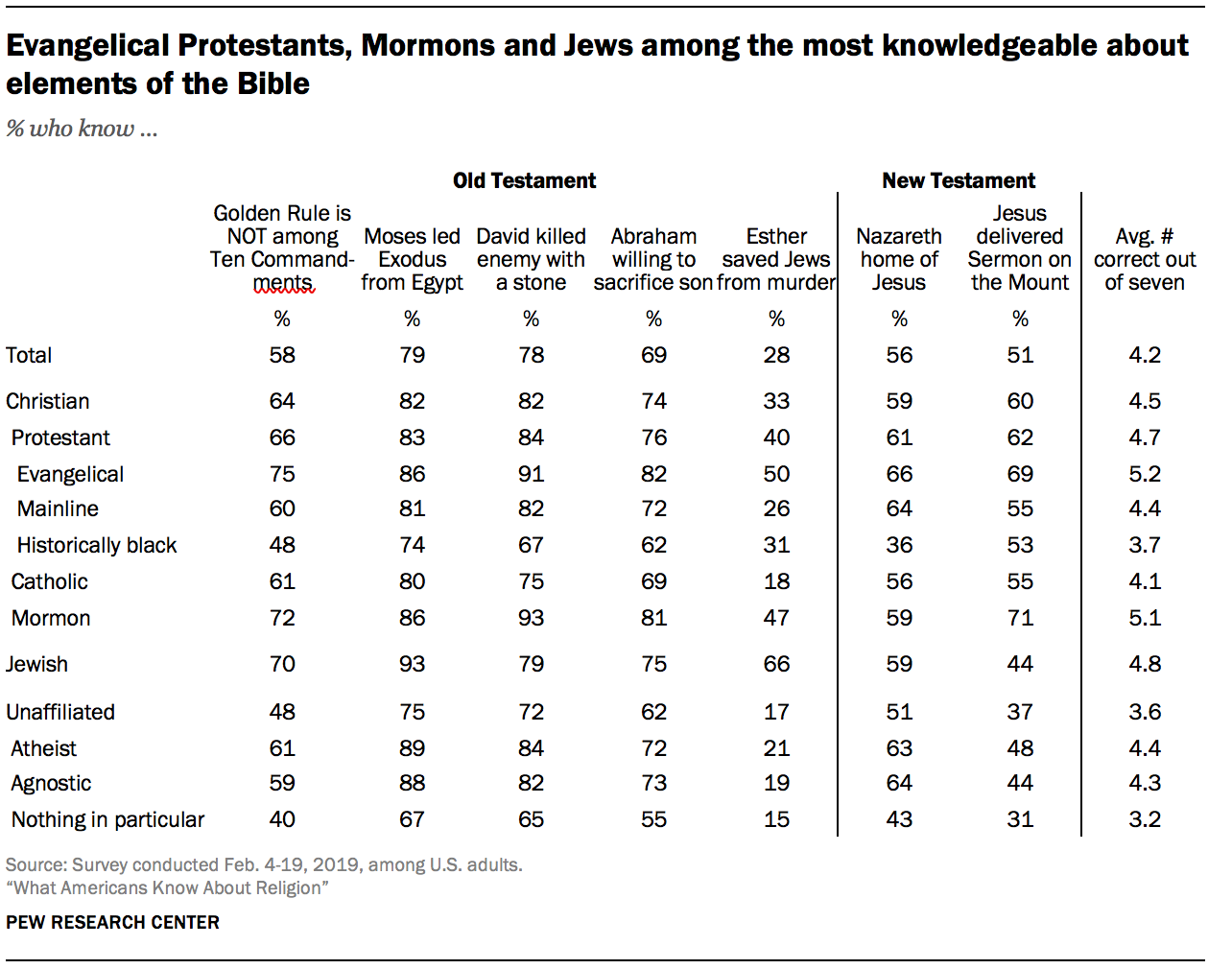 In addition to the questions about the Bible, the survey contained seven items about elements of Christianity. On average, U.S. adults correctly answer half (3.5) of these questions. Evangelical Protestants get 4.1 of the seven right, on average, on par with atheists (4.2) and agnostics (4.1). Catholics (3.7 questions right, on average) and mainline Protestants (3.7) are next, followed by Mormons (3.4) and Jews (3.1).

The survey’s most widely known facts about Christianity involve Easter and the Trinity. Eight-in-ten Americans (81%) know that Easter commemorates Jesus’ resurrection, and not his crucifixion, ascension to heaven, or last supper. A similar share (79%) know that the doctrine of the Trinity holds that there is one God in three persons (the Father, the Son, and the Holy Spirit). Just 3% of those surveyed choose one of the wrong answers to the question about the Trinity, while nearly one-in-five (17%) say they are unsure what the Trinity is.

At the other end of the spectrum, many Americans struggle with the survey’s questions asking specifically about Protestantism. Just one-fifth of respondents correctly identify Protestantism as the source of the Christian teaching that salvation comes through faith alone (a teaching known since the Reformation by the Latin term sola fide). Others erroneously think sola fide is taught by the Catholic Church or that it is taught in both Protestantism and Catholicism (or neither).

And fewer than one-quarter of Americans (22%) know that the prosperity gospel teaches that those of strong faith will be blessed with financial success and good health. Even among Protestants, fewer than a third answer these questions correctly (28% on each), although evangelical Protestants do better than other Protestants on both.

Slightly more than half of Americans (54%) are familiar with the Catholic concept of purgatory, where the souls of those who have died undergo purification before they enter heaven, but nearly one-quarter of respondents (23%) erroneously think purgatory refers to a place of eternal punishment for the souls of evildoers. A smaller share of U.S. adults (34%) know that the Catholic Church teaches that during the Mass, the bread and wine used for Communion actually become the body and blood of Christ (a process called transubstantiation); most (55%) say that these are just symbols, according to the church. Catholics are more likely than those in most other groups to get these questions right (71% of Catholics know what purgatory is, and 50% know the church’s teaching on transubstantiation), but even among Catholics, there is a substantial degree of confusion on these topics.

The survey also asked people to identify the religion of Joseph Smith, the founder of Mormonism. A majority of Americans (58%) know Smith’s religion, including virtually all U.S. Mormons (97%). 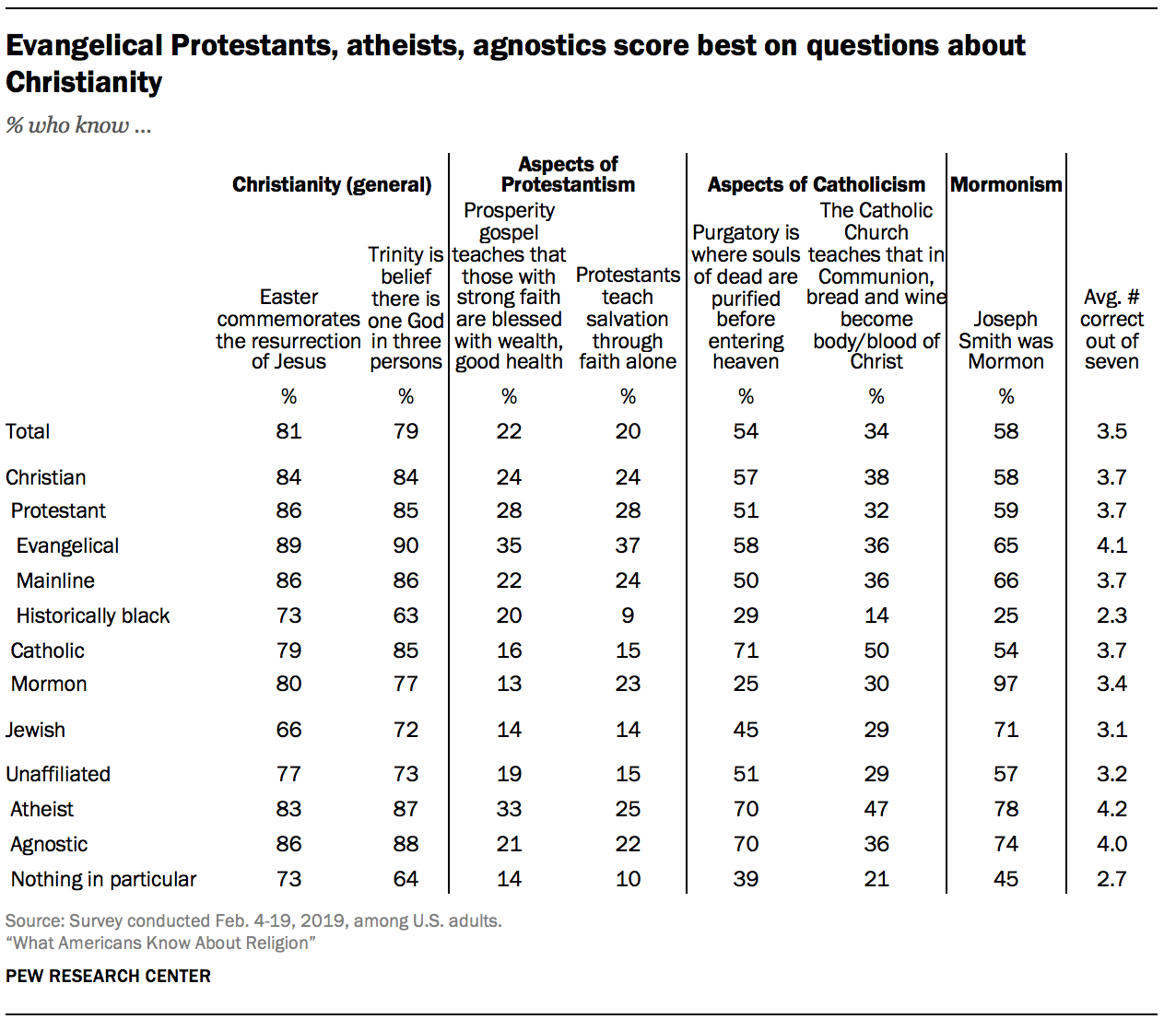 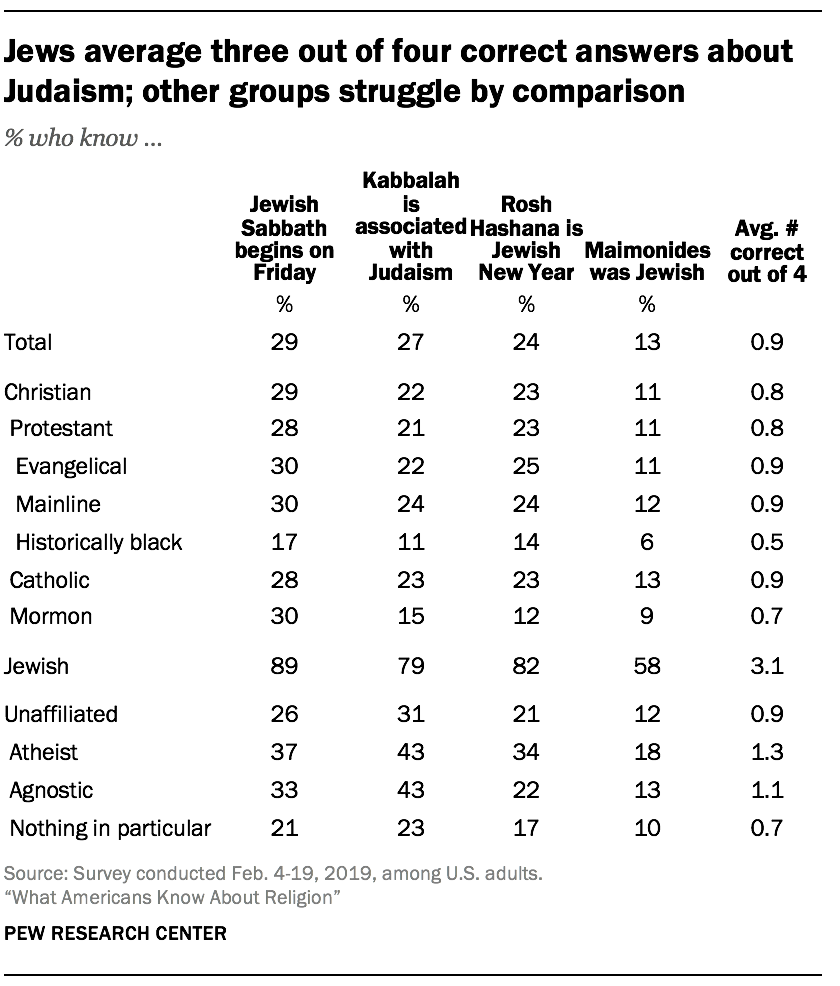 Overall, roughly three-in-ten Americans (29%) know that the Jewish Sabbath begins on Friday (not Thursday, Saturday or Sunday).16 One-quarter (27%) know that Kabbalah is associated with Judaism (not Hinduism, Islam or Zoroastrianism), and 24% know that the holiday of Rosh Hashana marks the Jewish New Year (not the Day of Atonement, a festival in which candles are lit for eight nights, or the celebration of the end of the Torah reading cycle).

Just 13% of U.S. adults know that Maimonides was Jewish (not Catholic, Buddhist, Mormon or Hindu), making that one of the most difficult questions in the survey. Jews answer this question correctly at much higher rates than the public overall, with 58% getting it right. But even among Jews, 6% select an incorrect answer to the question and 36% say they are unsure.

The survey included six questions about world religions other than Christianity and Judaism (two about Islam, two about Hinduism, one about Buddhism and one about Sikhism), and Americans answer an average of 2.5 of these questions correctly. Atheists (3.6), agnostics (3.5) and Jews (3.5) do the best on this set of questions. (The survey did not include enough interviews with Muslim, Hindu, Buddhist or Sikh respondents to permit analysis of their levels of religious knowledge.)

About six-in-ten Americans (62%) know that Mecca (not Cairo, Jerusalem or Medina) is Islam’s holiest city, to which Muslims have a religious obligation to make a pilgrimage at least once during their lifetime, if they are able to do so. And a similar share of the public (60%) knows that Ramadan is an Islamic holy month (and not a Hindu festival of lights, a Jewish prayer for the dead, or a festival celebrating Buddha’s birth). 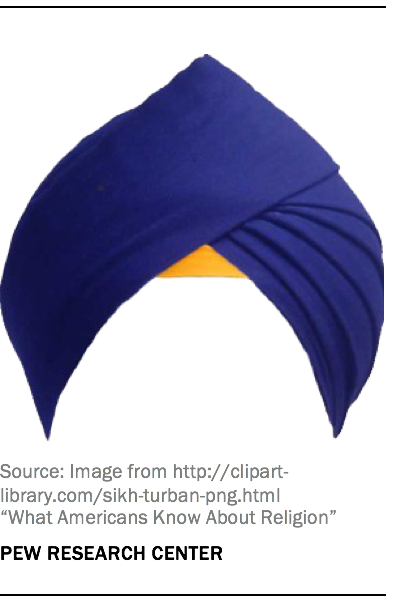 More U.S. adults (42%) know that Sikhism is the religious tradition in which men are generally required in public to wear a turban, such as the one pictured to the right, and to carry a ceremonial sword or small dagger. About one-in-five people incorrectly choose Islam (18%) or Hinduism (17%) in response to this question, while 3% choose Buddhism and one-in-five say they are unsure of the correct answer (20%). 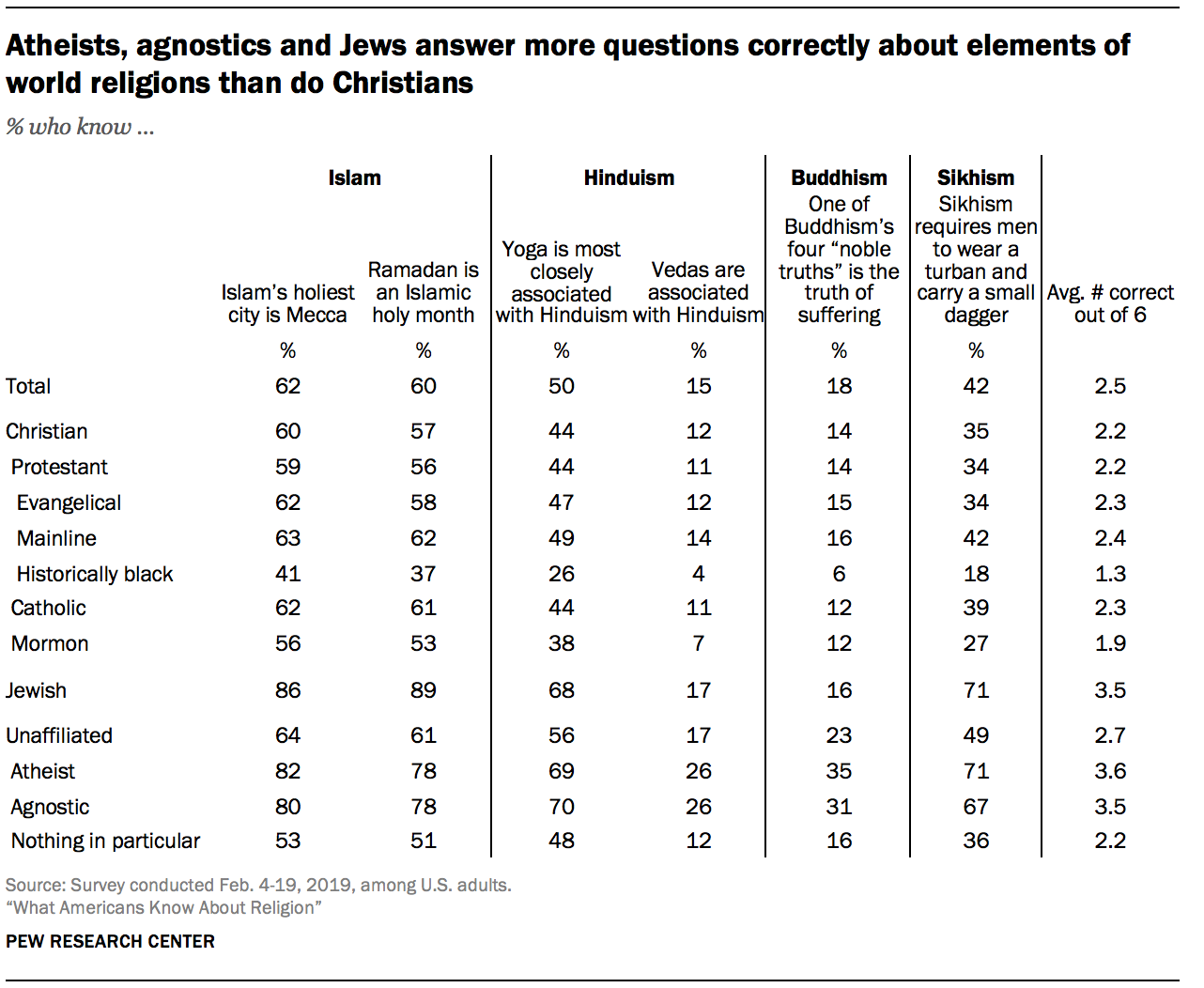 The religious composition of Thailand, Indonesia and Ethiopia 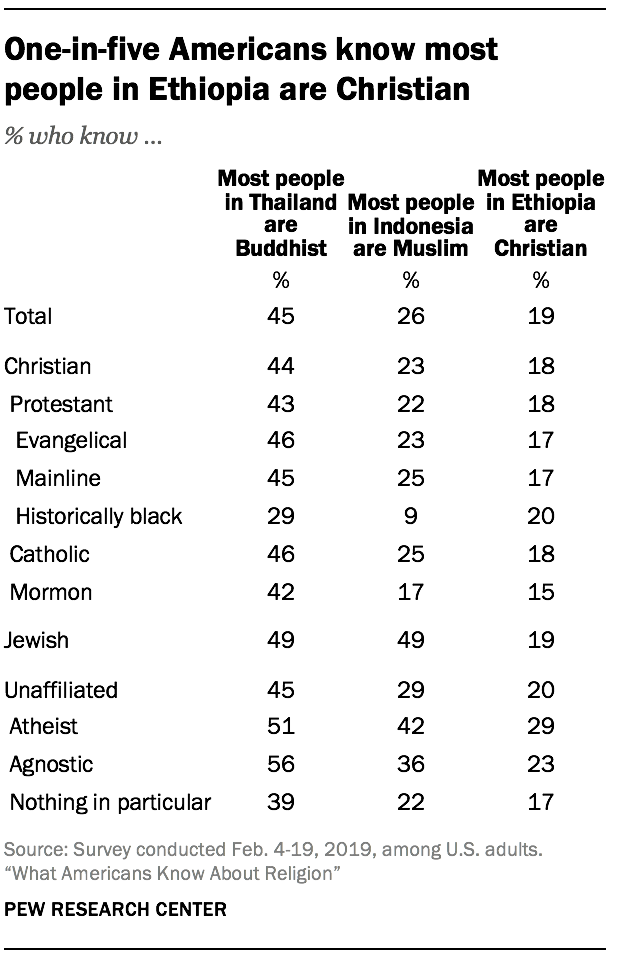 To gauge what Americans know about the religious makeup of different parts of the world, the survey asked respondents to name the majority religion in three countries – Thailand, Indonesia and Ethiopia – each of which has a different majority religion.

The size of U.S. religious minorities 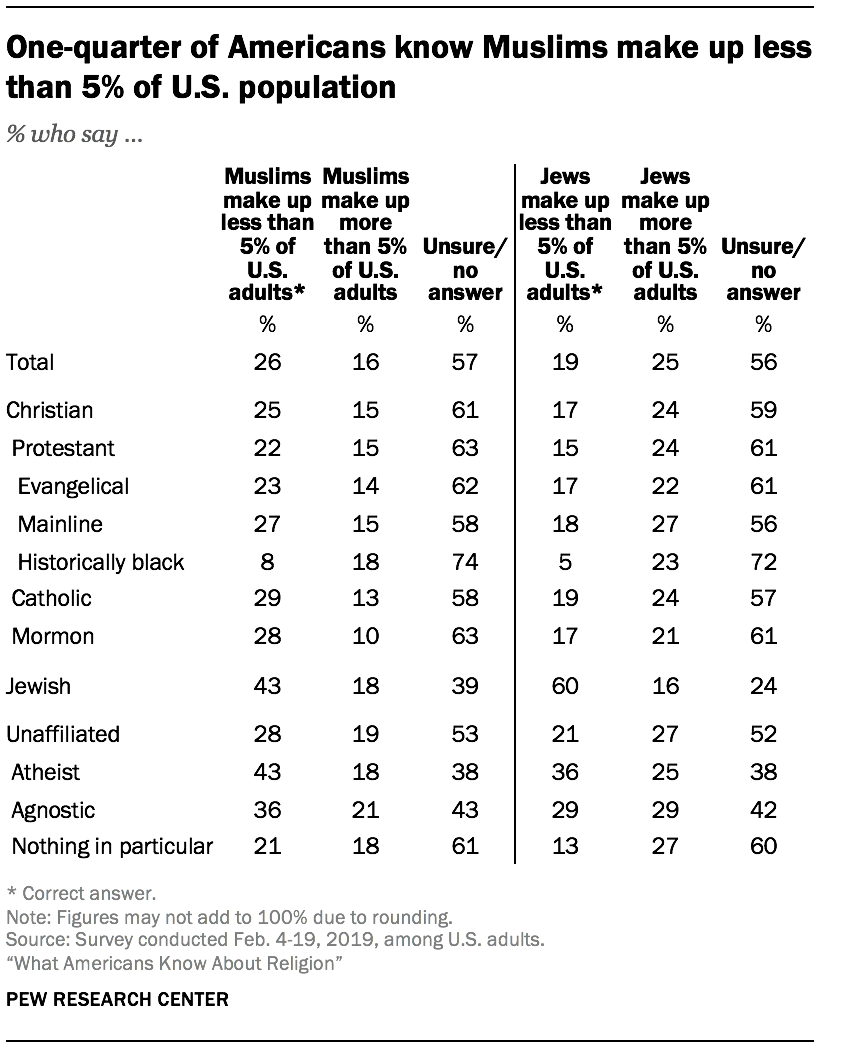 Both Jews and Muslims make up small shares of the U.S. population (about 2% of American adults are Jews and 1% are Muslims). But few Americans are aware of this fact. Just one-quarter of survey respondents (26%) correctly say that Muslims make up less than 5% of U.S. adults, and one-in-five respondents (19%) say that Jews make up less than 5% of the population. Most Jews themselves (60%) are able to correctly identify the proportion of Jewish adults in the U.S. (There were not enough Muslim respondents in the survey to determine whether Muslims generally know what share of the U.S. population they constitute.)

Some Americans mistakenly think that the Muslim American and Jewish American populations are much bigger than they are, and even more people say they don’t know. While 16% of Americans incorrectly answer that Muslims make up more than 5% of the population, more than half of respondents (57%) say they are unsure about the size of the U.S. Muslim population or decline to answer the question. Meanwhile, a quarter of U.S. adults think Jews are more numerous than is actually the case, while 56% say they are unsure (or offer no response).

Knowledge about atheism and agnosticism 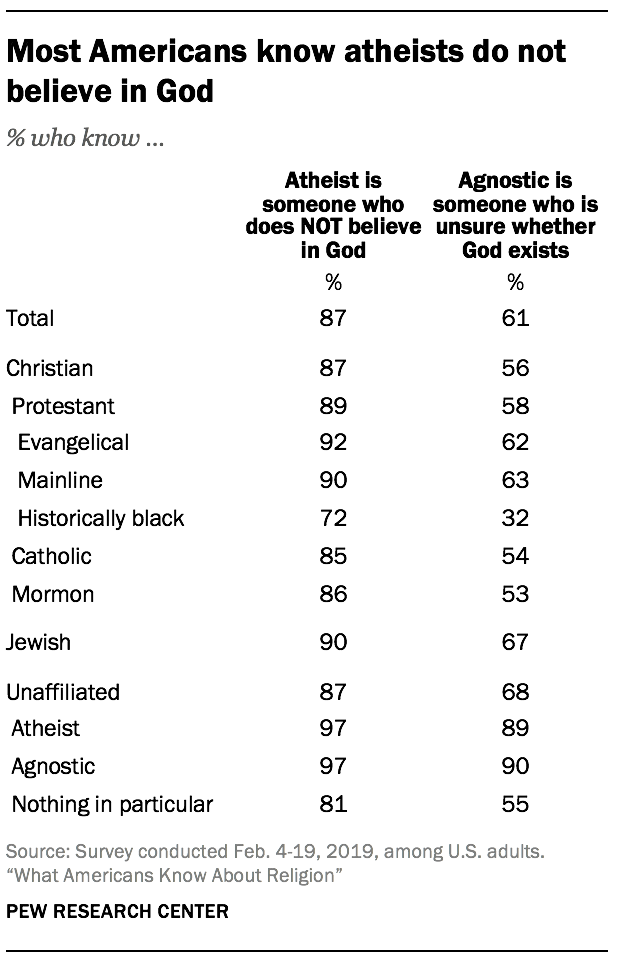 Most Americans know that an atheist is someone who does not believe in God. Indeed, 87% of U.S. adults correctly answer this question, the highest share of correct responses on any religious knowledge question in the survey. Nearly all self-identified atheists and agnostics included in the survey get this question right (97% each), as do smaller majorities of members of other religious groups.

Six-in-ten respondents correctly define an agnostic as someone who is unsure whether God exists (61%). At the high end, nine-in-ten agnostics (90%) and atheists (89%) correctly answer this question, although 10% of people who identify as agnostics either define the word incorrectly (9%) or say they are not sure what it means (1%). 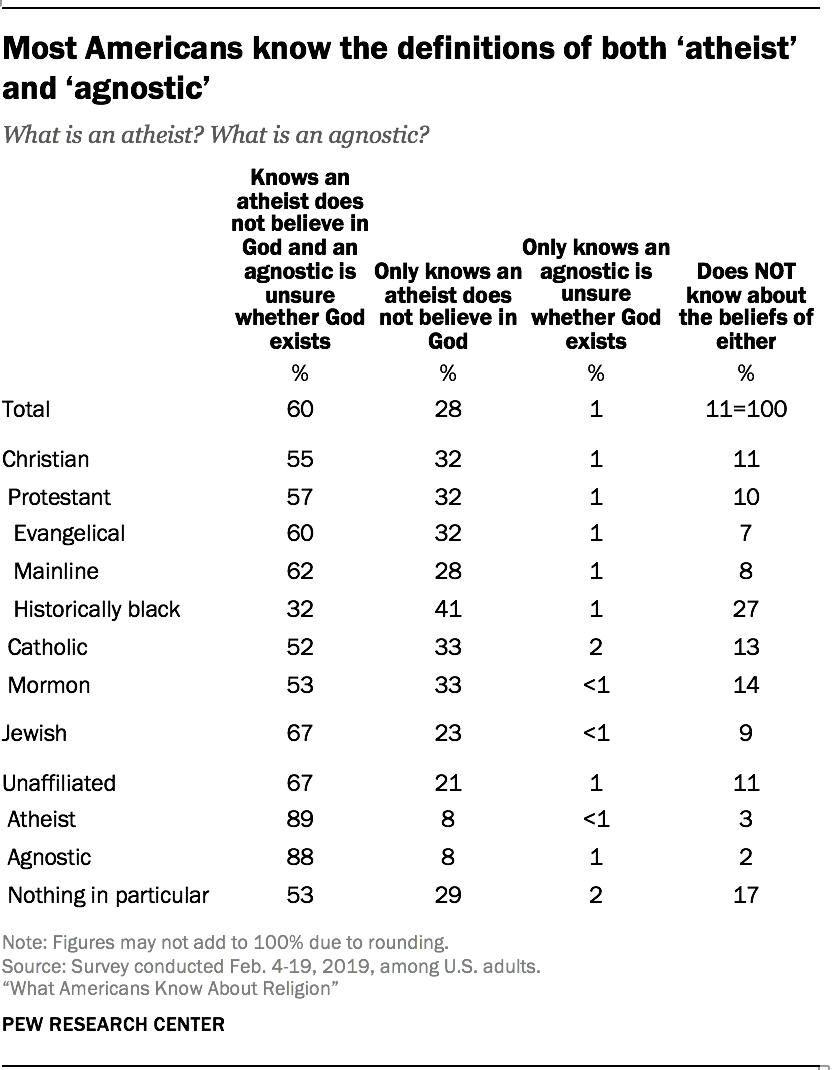 Looked at another way, most Americans correctly answer the questions about both atheism and agnosticism (60%). One quarter of adults (28%) know what an atheist is but not what an agnostic is, while just 1% can define “agnostic” but not “atheist.” One-in-ten U.S. adults (11%) are unfamiliar with both terms.

Knowledge about religion in the U.S. Constitution

Half of atheists answer this question correctly (55%), while about four-in-ten agnostics (41%) and Jews (38%) get it right. Like the public overall, about a quarter of mainline Protestants (27%), Catholics (26%), Mormons (23%) and those who say their religion is “nothing in particular” (23%) know that no religious test is necessary for holding public office under Article Six of the Constitution. (The survey question did not ask about the First Amendment, which says that Congress “shall make no law respecting an establishment of religion, or prohibiting the free exercise thereof.”)

Next: 2. Factors linked with religious knowledge Next Page → ← Prev Page