1. Many in U.S. see religious organizations as forces for good, but prefer them to stay out of politics

Americans largely have positive feelings about the role religion plays in American life. A slim majority of U.S. adults say religious organizations do more good than harm in American society, while just one-in-five say they do more harm than good. Specifically, roughly half of Americans give religious organizations high marks when it comes to strengthening morality and bringing people together.

But U.S. adults draw the line when it comes to politics: More than six-in-ten say churches and other houses of worship should not express their views on day-to-day social and political matters, and three-quarters say religious organizations should not endorse candidates for office.

Among religiously unaffiliated Americans (those who say they are atheist, agnostic or “nothing in particular,” sometimes called religious “nones”), most say religious institutions have too much influence on politics, and that religious conservatives have too much control over the Republican Party.

This chapter also includes an analysis by religious group of several questions about how friendly various institutions are toward religion. Most Republicans say the Democratic Party, university professors, and reporters and the news media are unfriendly to religion.

Most Christians see religion as a force for good in American life. Two-thirds of Christians say that churches and other religious organizations strengthen morality in society (67%), and 64% say they mostly bring people together. Seven-in-ten say that, overall, religious organizations do more good than harm in American society. Positive views of religion’s impact on American life are especially common among evangelical Protestants, but majorities in all Christian groups analyzed see religion’s influence as more positive than negative in these ways.

The views of U.S. Jews and the religiously unaffiliated are decidedly more mixed. For instance, while roughly four-in-ten Jews (42%) say religious organizations strengthen morality, a similar share (39%) say they do not make much difference in this regard and one-in-five (19%) say religious organizations weaken morality in American society. Among the religiously unaffiliated, those who say that religion does more harm than good outnumber those who say it does more good than harm (39% vs. 31%). Self-identified atheists are especially negative toward religion: 64% say religious organizations mostly push people apart (rather than bring people together), and 70% of U.S. atheists say that, overall, religion does more harm than good in American life. 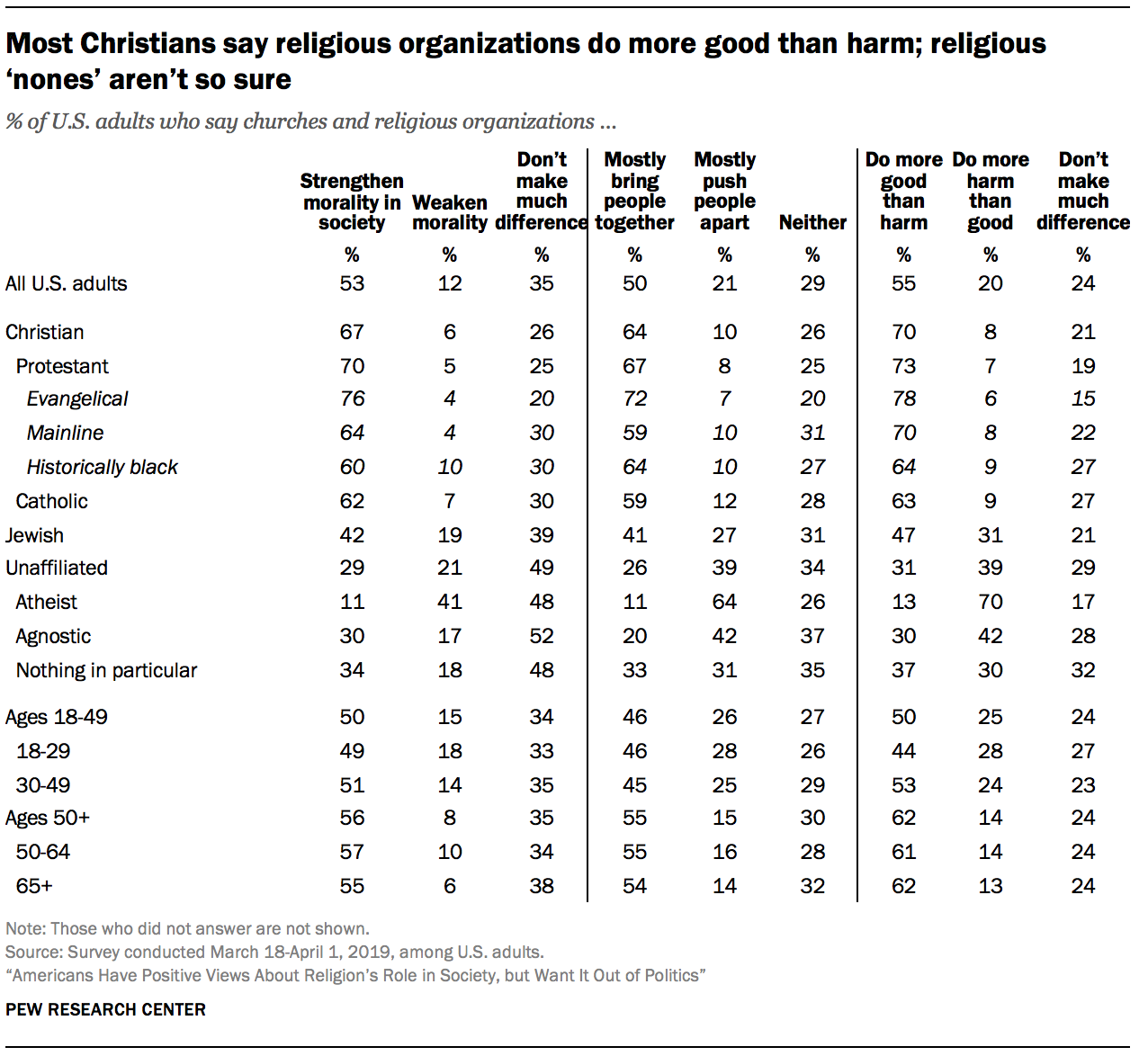 Majority of U.S. adults say religion is losing its influence 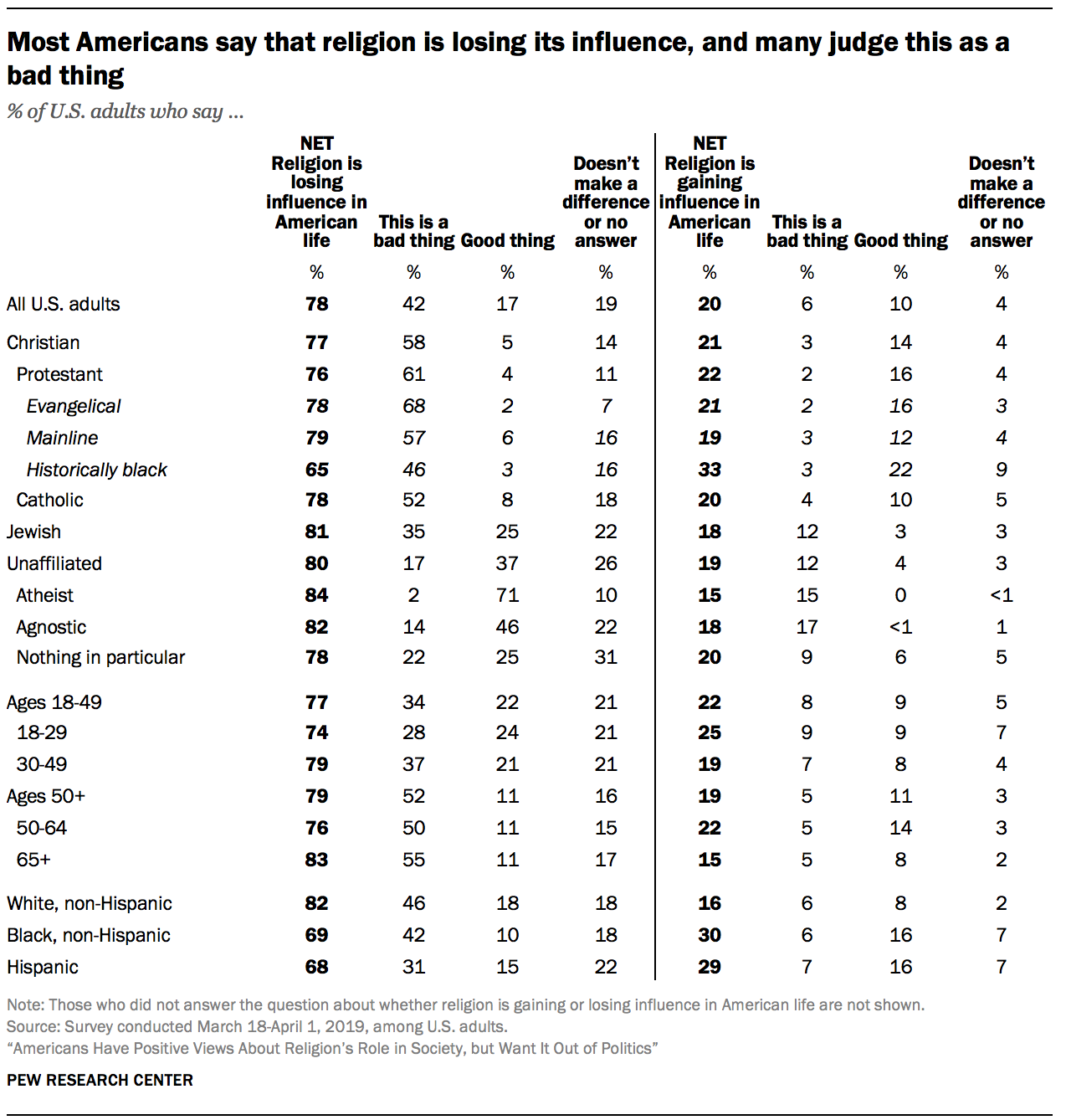 Majorities of Americans want houses of worship out of political matters 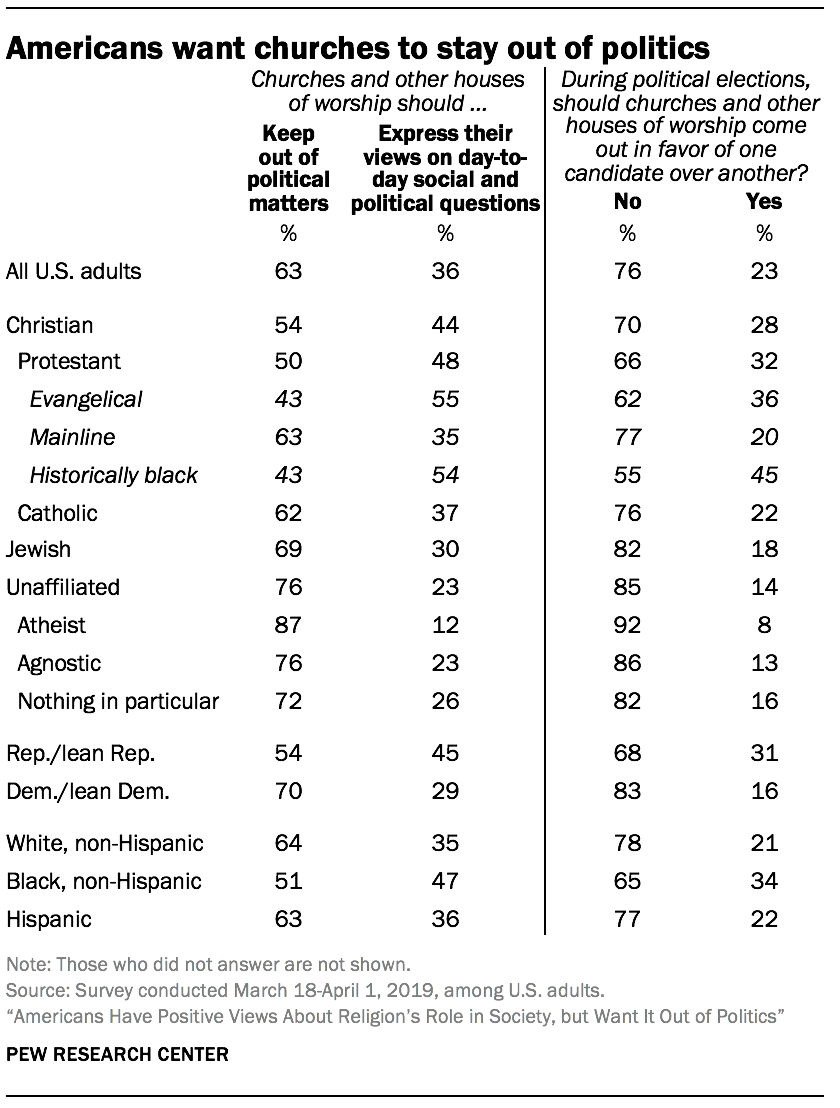 More than six-in-ten U.S. adults believe that churches and houses of worship should keep out of political matters (rather than express their views on day-to-day social and political questions), and fully three-quarters say they should not come out in favor of one candidate over another during elections.

Jews and the religiously unaffiliated are more likely than Christians to oppose political activity by religious organizations. Even among Christians, however, seven-in-ten say churches and other houses of worship should refrain from endorsing candidates for political office, and more than half (54%) say churches should keep out of political matters (rather than express their views on day-to-day social and political questions).

Democrats and those who lean toward the Democratic Party are more likely than Republicans and Republican leaners to say religious organizations should steer clear of politics. But both groups express more opposition to political involvement by churches than support for it. 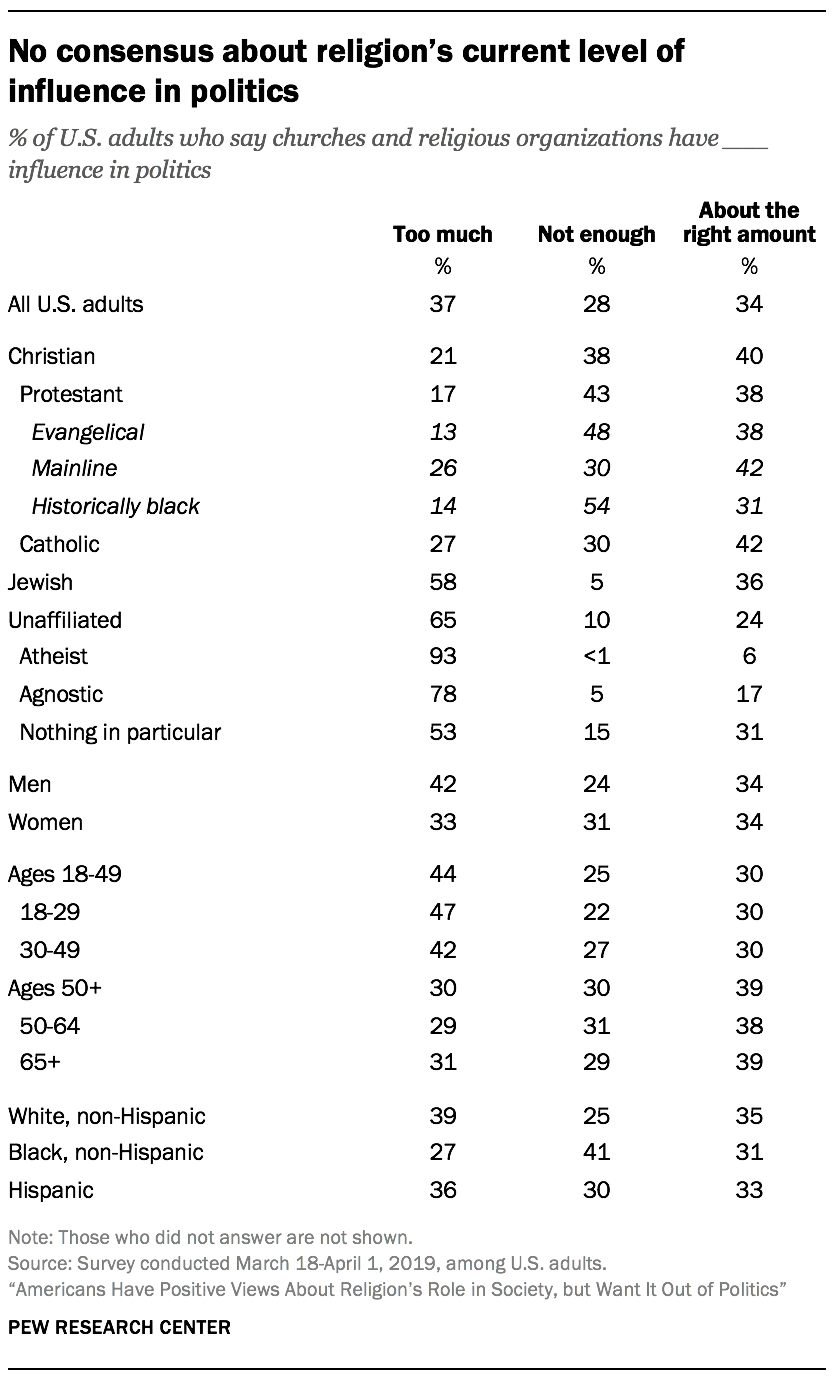 Most atheists, agnostics and Jews say religious conservatives have too much control over GOP; most evangelicals say nonreligious liberals have too much sway over Democratic Party 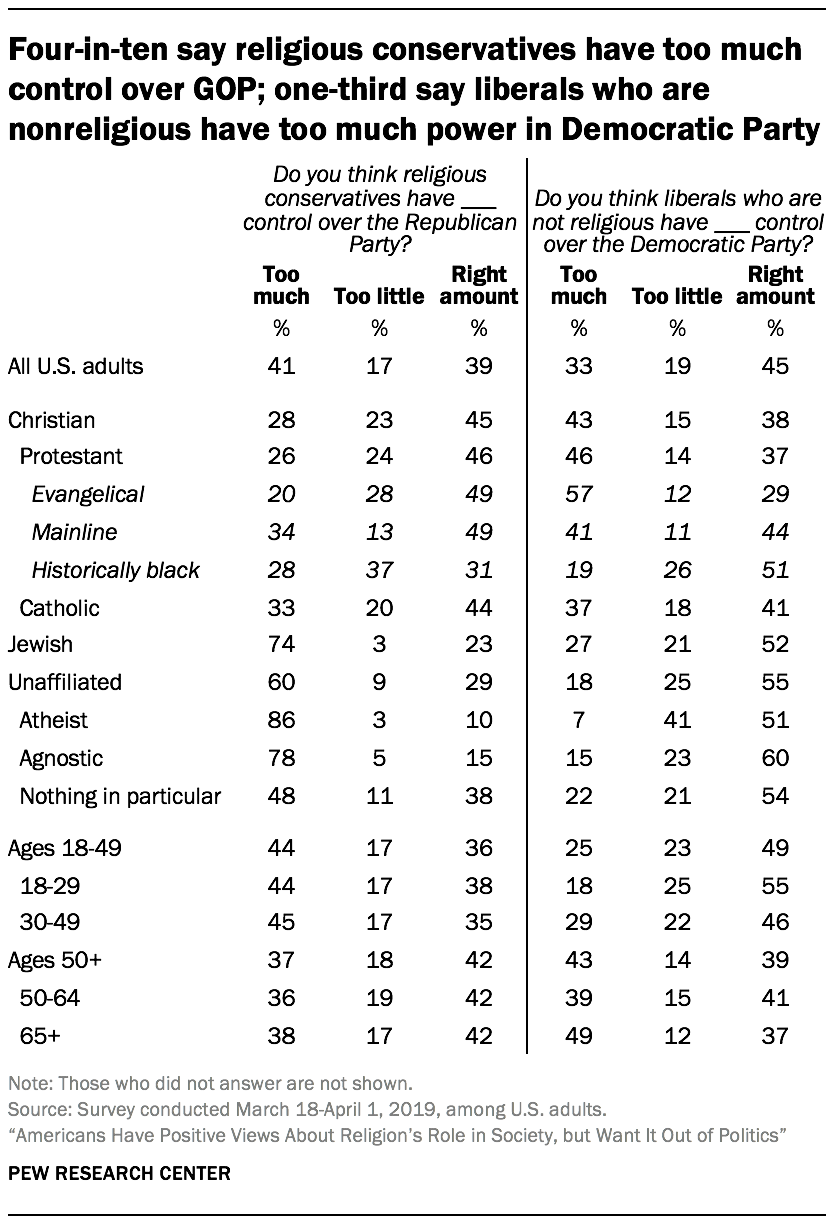 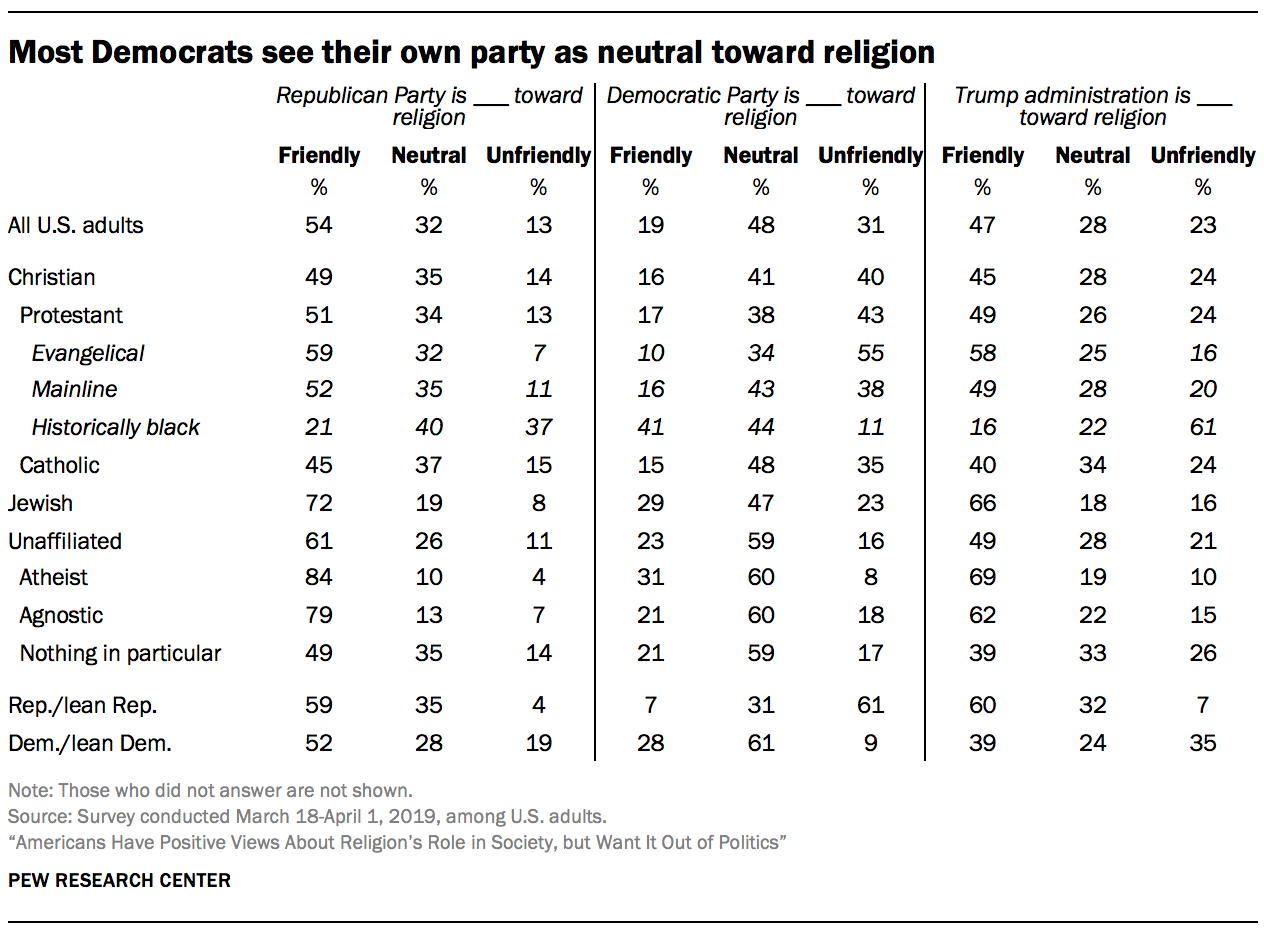 In addition, nine-in-ten Republicans view the Trump administration as either friendly (60%) or neutral (32%) toward religion. But fully a third of Democrats say the White House is unfriendly toward religion (35%).

The survey also shows that majorities of evangelical Protestants – most of whom identify with or lean toward the Republican Party – think that the Democratic Party, professors and journalists are unfriendly toward religion. At the same time, about six-in-ten evangelical Protestants think the GOP and the Trump administration are friendly toward religion. 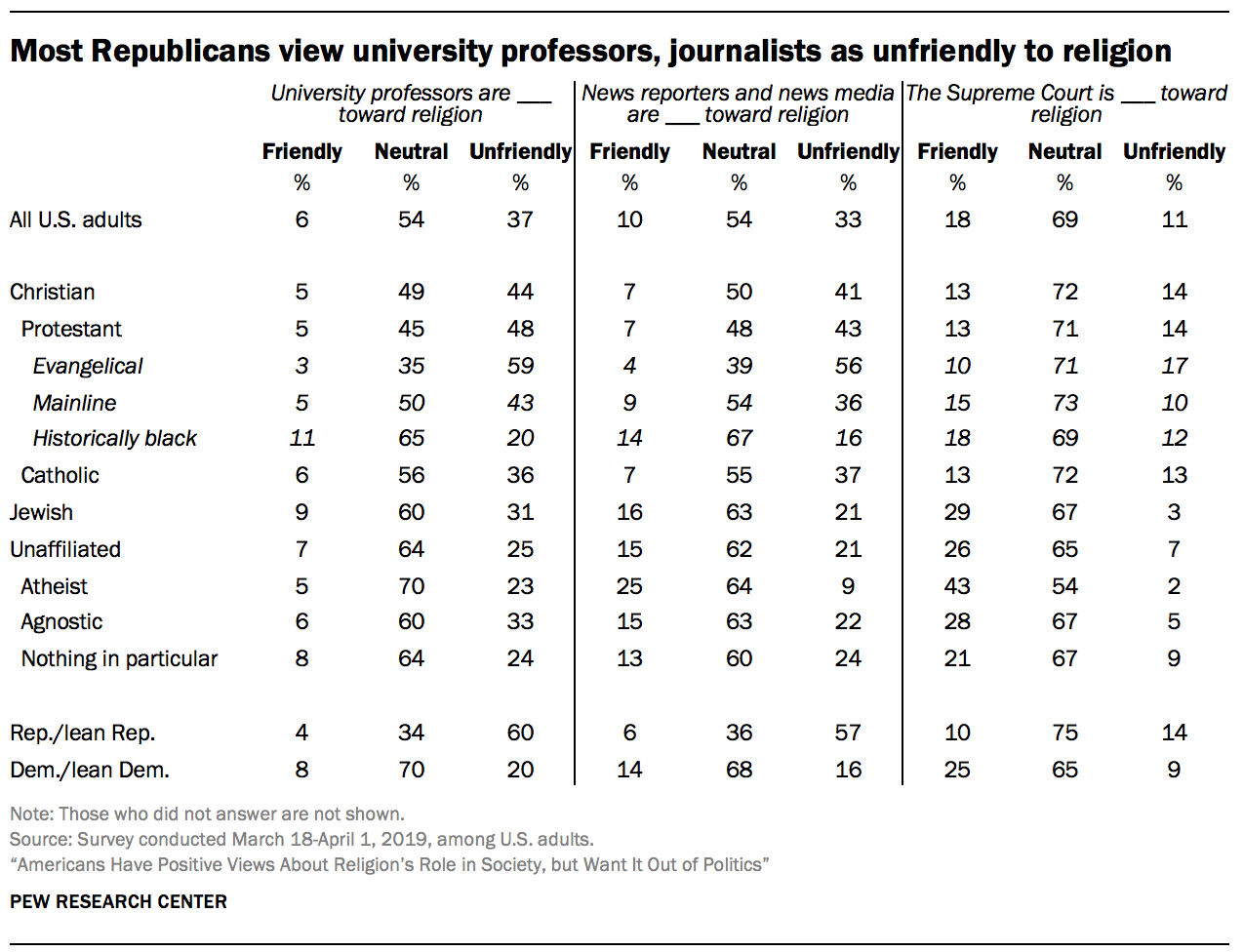 Next: 2. Most congregants trust clergy to give advice about religious issues, fewer trust clergy on personal matters Next Page → ← Prev Page