3. Household patterns by age and gender

People move between different types of households throughout their lives. Someone born into a two-parent home might become a member of an extended-family household when a grandmother moves in, live as a couple with their spouse in middle adulthood and end up in a solo household after that partner dies.

Differences in living arrangements are particularly striking for children under 18 and adults who are 60 and older. While someone in their 30s can easily be found in any household type, it is unusual for anyone under 18 to live solo, or for someone in their 60s to raise a child alone.

Moreover, examining age groups separately is important because a society’s age composition affects living arrangements for the overall population. Countries with longer life expectancy, for example, are more likely to have people living as couples without children, in part because parents may live for decades after their children move out. Places with higher fertility are more likely to have two-parent and extended-family homes simply because there are more children overall per household.

Sex is another variable associated with living arrangements, both within religious groups and across them. Women are more likely than men to be single parents, for example, and also more likely to live alone in later years.

Earlier in this report, all age and gender groups were included when analyzing shares of people in different types of households. This chapter examines the differences, by religion and region, between people within the same phase of life, and of the same gender.58

Children under 18 make up about a third of the world’s population – and in the fast-growing regions of sub-Saharan Africa and the Middle East-North Africa, they account for 48% and 37%, respectively. 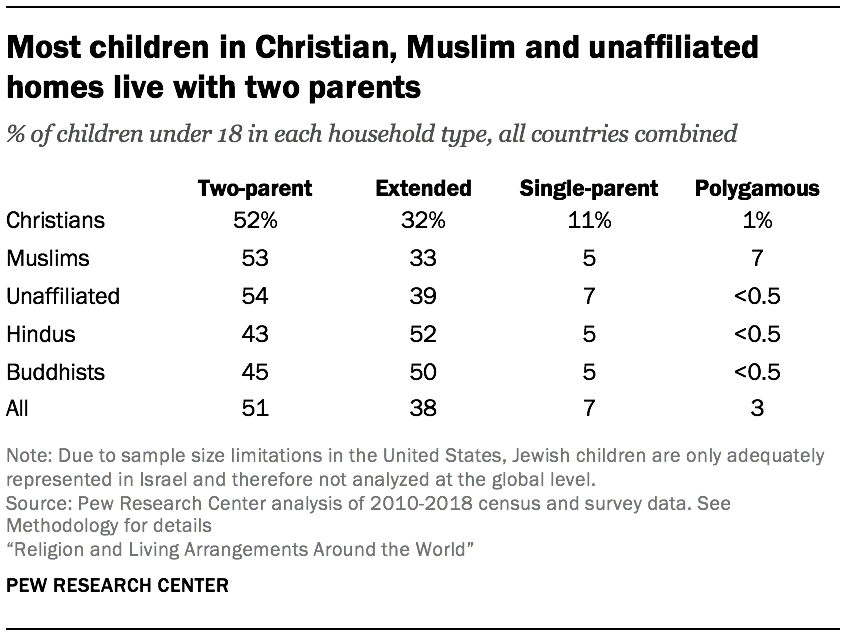 For children around the world, sharing a home with two parents – whether biological, step, adoptive or foster, married or unmarried – is the most common arrangement (51%). But many children also live in extended-family homes (38%), whether with aunts and uncles, grandparents, or other family members aside from parents and siblings.

A little more than half of Christians, Muslims and “nones” under 18 live with two parents, while fewer than four-in-ten among these groups reside in extended-family homes. The pattern is reversed for Hindu and Buddhist children, who, like their adult counterparts, are more likely to live with extended family. Roughly half of Hindu children live with extended families (52%), while about four-in-ten live in two-parent homes (43%). As has been noted before, 94% of Hindus live in India, where extended-family households are common overall. Still, Hindu children in India are even more likely than their Christian, Muslim or unaffiliated peers to live with extended family. 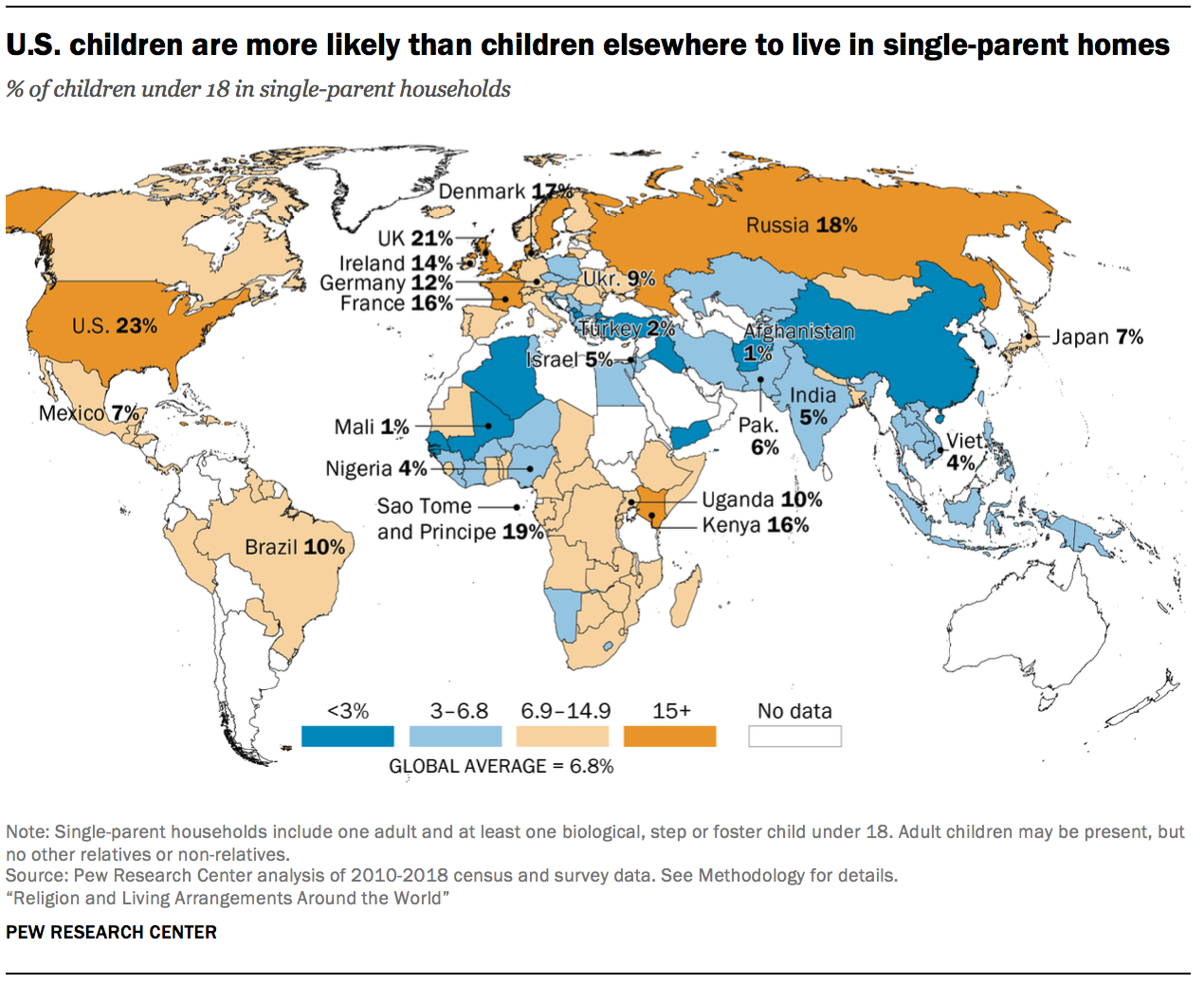 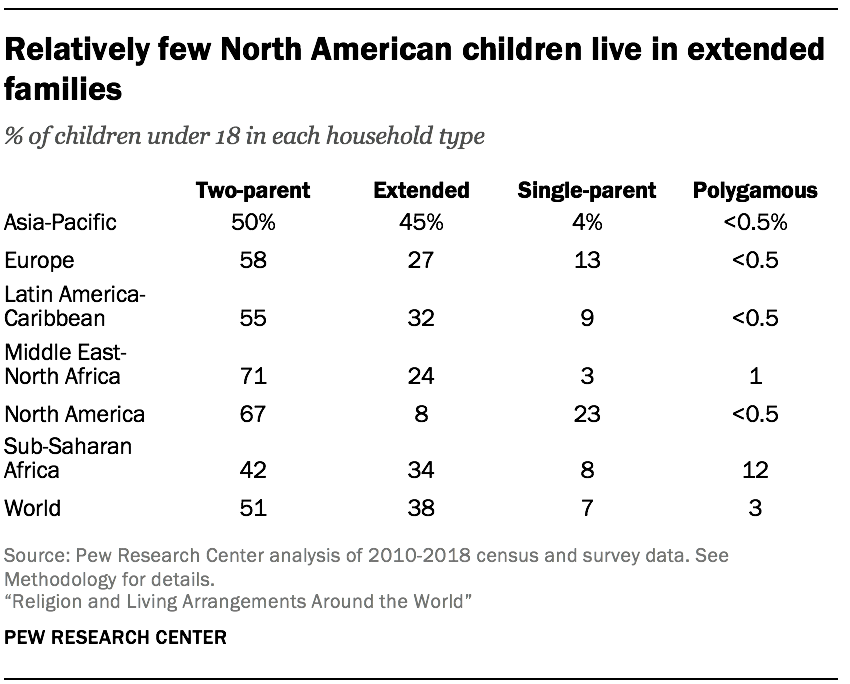 Living alone or as a couple is very rare for children, though not unheard of. In South Korea, about 5% of Christian and unaffiliated children under 18 live in solo households.

Living arrangements of people 60 and older

People in later adulthood have many things in common, no matter what religious group they belong to or where in the world they live. Most of them have finished bearing and raising children, and many have experienced the loss of a spouse, a need for caretaking, the birth of a new generation of family members or some other shift that causes a change in their living arrangements. 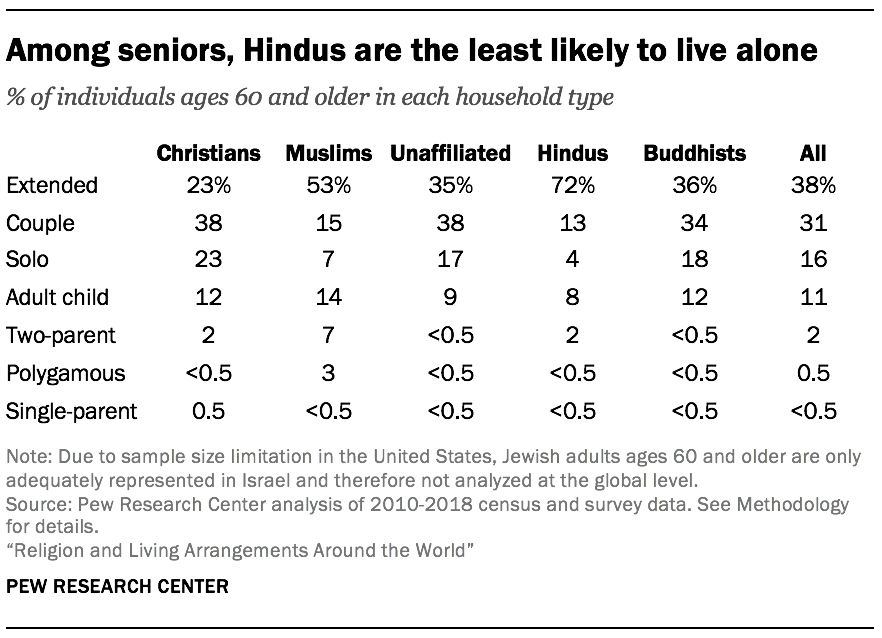 Yet adults over age 60 of different religions and in different parts of the world vary widely in their living arrangements. In addition to some of the other factors discussed in this report that are related to household patterns (such as religion, geography and economics) living arrangements for older people are particularly tied to another measure of prosperity – life expectancy. (See the below chart.)

Around the world, living with extended family is the most common arrangement for people ages 60 and older, even though fewer than half of all older adults globally (38%) live in this household type. Living as a couple is the second most common experience (31%), followed by living alone (16%).

Hindu and Muslim seniors are particularly likely to live with extended family. Almost three-quarters of Hindus (72%) live in this type of arrangement, including in multigenerational households. Hindus are concentrated in India and other Asia-Pacific countries where extended-family households are relatively common.

By contrast, fewer than a quarter of Christians ages 60 and older globally (23%) live with extended family, while an identical share of Christian seniors around the world live alone – the highest of any religious group analyzed. Among older Christian and unaffiliated adults, living as a couple is the most common arrangement (38% each).

Muslims have a higher-than-average share of adults over 60 who are still raising minor children without extended family, with 7% of older Muslims living in two-parent or single-parent households combined – equal to the share who live alone.

Some of these differences are tied to levels of economic development, particularly as measured by life expectancy. Older adults are more likely to live alone or as couples in countries where an average person can expect to live more than 70 years. In countries where lives are shorter, seniors tend to live with other family members instead. Life expectancy is often linked to other markers of prosperity within a country, so older adults who can expect to live into their 80s also tend to live in countries where living alone is more affordable and sources other than family may provide help in meeting basic needs.

Cultural norms also may play a role; in Western countries it is often expected that seniors will live alone.62 In India and other parts of the world it may be seen as a normal arrangement (or even a responsibility) for adult children to take their aging parents into their home. One example of this can be seen among immigrant communities in the West: In Canada, almost half of Hindus ages 60 and older (who are often immigrants or the children of immigrants from South Asia) live with extended families (47%), more than four times the share of Canadian seniors overall (10%). 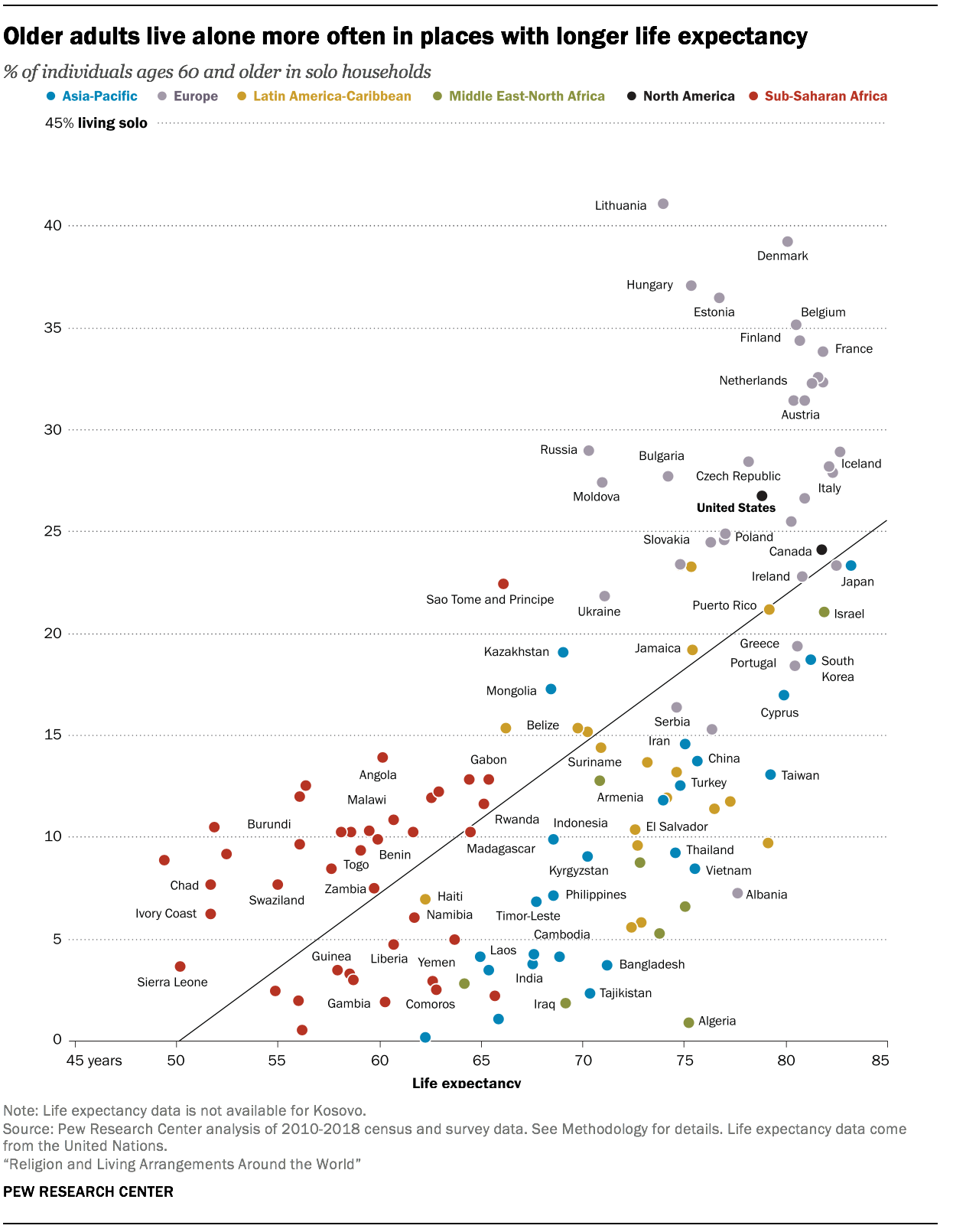 Experiences of men and women

Men and women around the world experience households differently, and these gender gaps sometimes vary by religious affiliation. Gender and religion play a role when it comes to three measures in particular: The age gap between cohabiting partners, the prevalence of single-parent households, and the rate of living alone in old age.

Men tend to be older than their wives or female cohabiting partners by a global average of about four years.63 Around the world, Jewish couples tend to have the smallest age gaps (2.1 years, on average) while Muslims have the biggest (6.6 years). Across all groups, the gaps are smallest in Europe and North America (less than three years), and biggest in sub-Saharan Africa (8.6 years). Of the 130 countries analyzed, there is no place where male partners are younger than their female partners, on average, or even the same age.

The countries with the world’s widest age gaps are all in sub-Saharan Africa and have high rates of polygamy; they include Gambia and Guinea, both with average gaps of around 14 years. The countries with the narrowest age gaps are largely in Europe (including the Czech Republic, Slovakia and Estonia), in addition to the U.S., China and Mongolia, all with gaps of around two years.

All over the world, women in middle adulthood (ages 35 to 59) are more likely than their male counterparts to live in single-parent homes.

These patterns partly reflect the large share of Christians in sub-Saharan Africa, where single-parent households are relatively common, and the big shares of Buddhists in Asia, where such households are rare. Middle-aged men tend to live in single-parent homes at about the same rate all over the world and regardless of religion – any differences in rates of single parenthood affect women almost exclusively. Middle-aged women in sub-Saharan Africa have the largest share in single-parent households, with about 9% in this arrangement – although North American (8%) and Latin American (7%) women are not far behind. 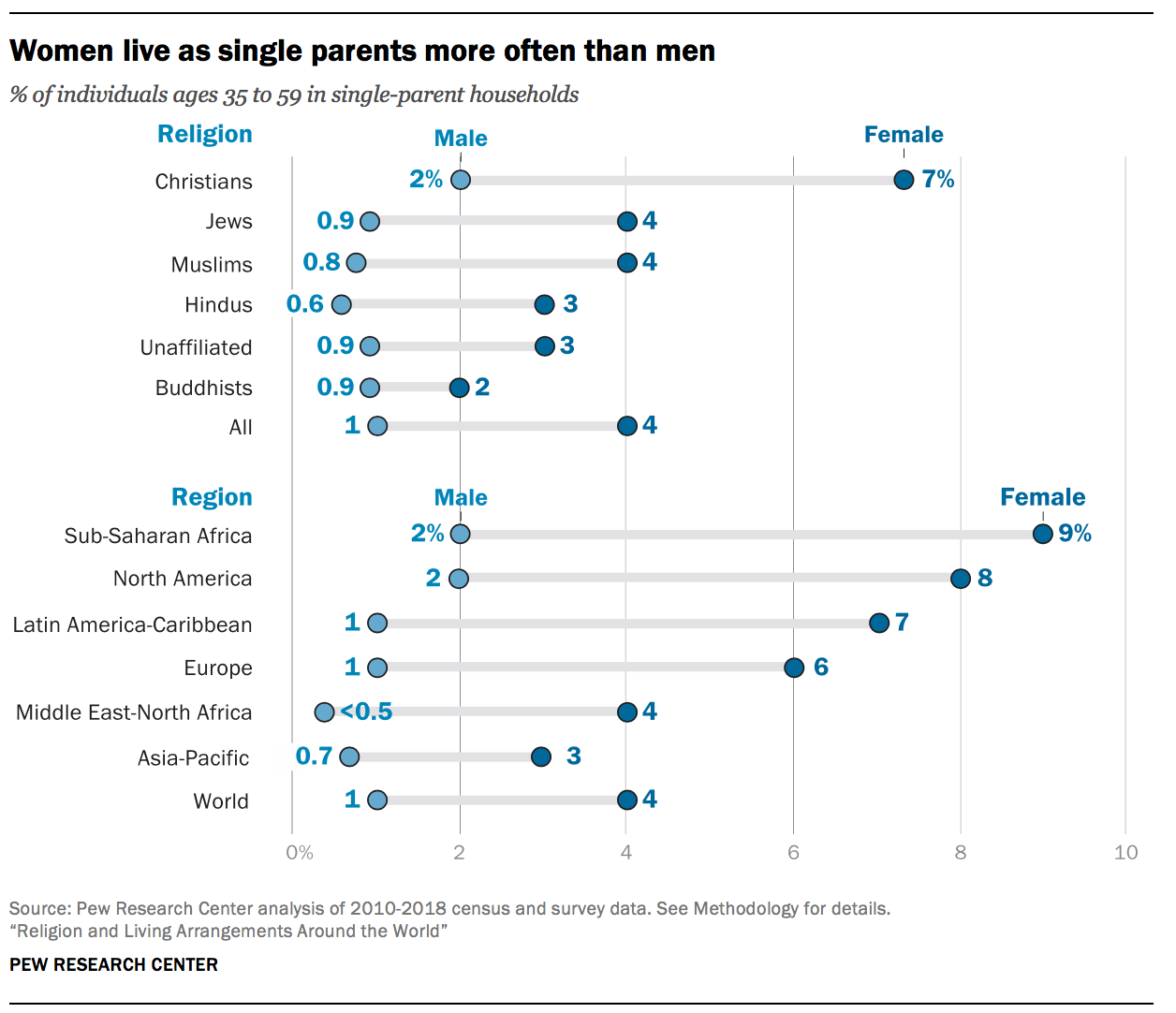 This pattern, which applies across religious groups and country borders, is tied to life expectancy: Because women tend to live at least a few years longer than men, larger shares of older women – in every religious group and in every region – live alone. The tendency of women to live alone in advanced age is a result of both women’s greater longevity and their tendency to form relationships with men who are older.64

Christians have the widest gap in rates of living alone, with older women found in solo households twice as often as older men (30% vs. 14%). Among Hindus ages 60 and older, on the other hand, few live alone regardless of gender (6% of women and 2% of men). Thus, while greater female life expectancy is universal, the living arrangements of widows are not.

In sub-Saharan Africa and the Middle-East North Africa region, women and men also differ in their frequency of living in two-parent households with minor children. Owing to the relatively large age gaps between partners in these regions, it is not uncommon for men in their 60s or beyond to live with a partner and children under 18. In the Middle East and North Africa, 14% of men ages 60 and older and 1% of women in this category live in two-parent households, and in sub-Saharan Africa, 19% of older men and 2% of older women live in such an arrangement. 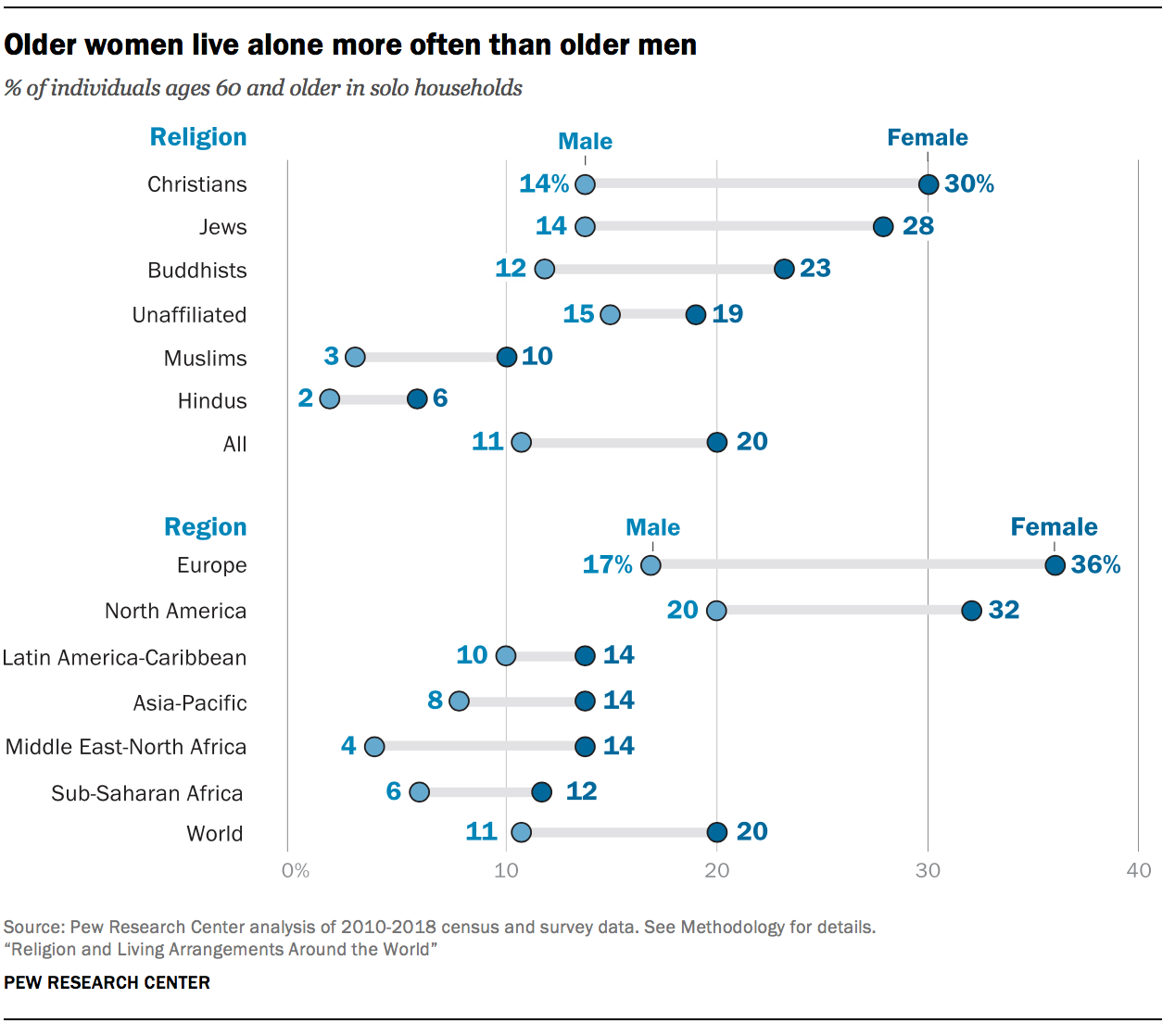