1. Attending and watching religious services in the age of the coronavirus

Looking ahead, however, most people indicate they plan to resume their pre-pandemic religious attendance routines once the outbreak is over. The remainder of this chapter explores Americans’ religious behaviors amid the pandemic in more depth, including congregants’ opinions about the precautions being taken.

How many Americans are attending religious services in person or online? 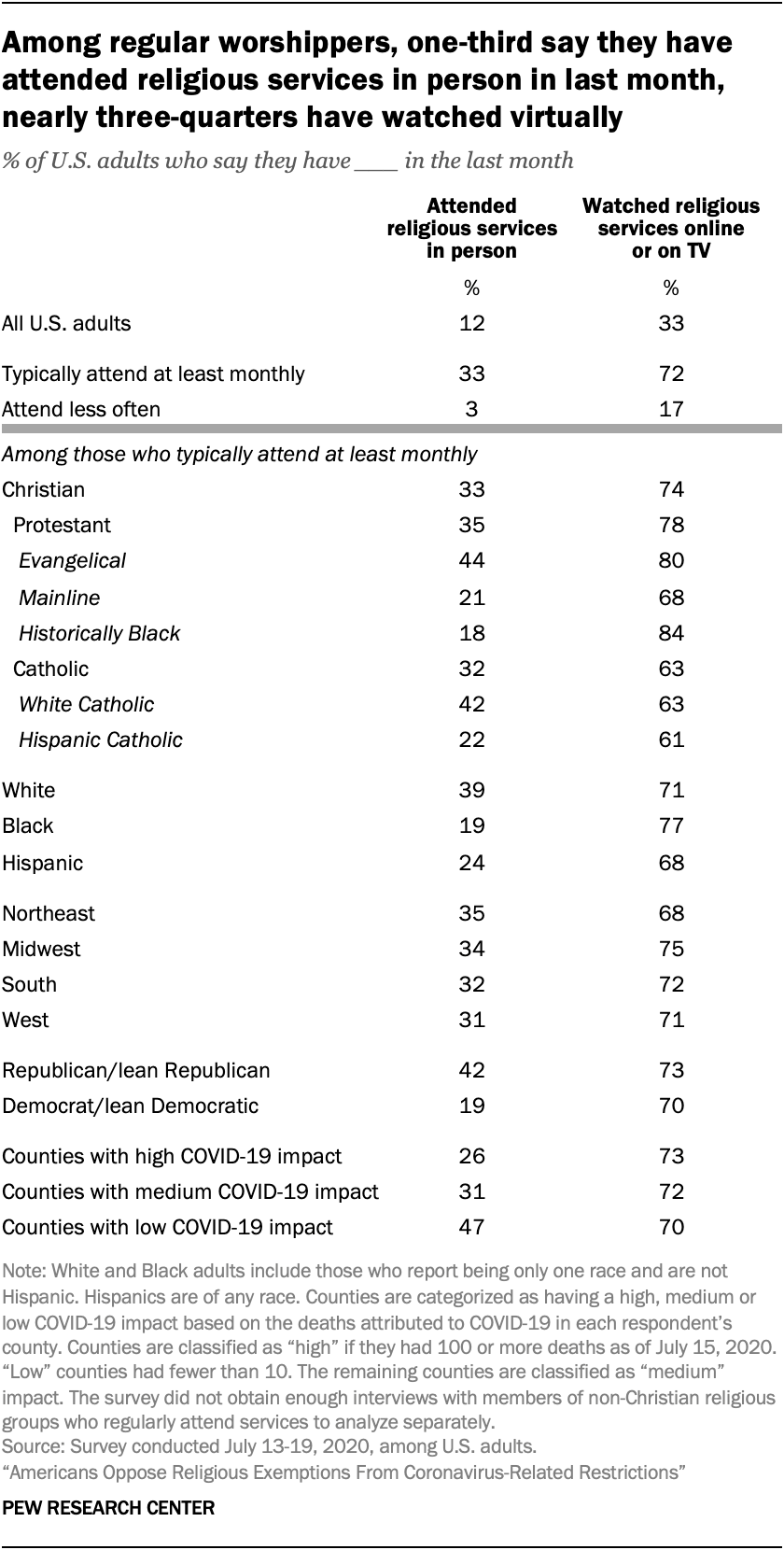 Evangelical Protestants report having attended in-person religious services during the last month at higher rates than members of other Christian traditions. And white Americans who typically attend worship services have recently gone in person at higher rates than Black and Hispanic attenders. For example, among Catholic Mass-goers, whites are almost twice as likely as Hispanics (42% vs. 22%) to say they have attended in-person Mass recently.

The survey finds only modest differences across regions of the country on these questions. However, people living in counties where the outbreak has had a smaller impact (that is, counties in which fewer than 10 people have died of the virus) are about twice as likely as those living in high-impact counties (counties with 100 or more coronavirus deaths) to say they have attended in-person religious services in the past month (47% vs. 26%). 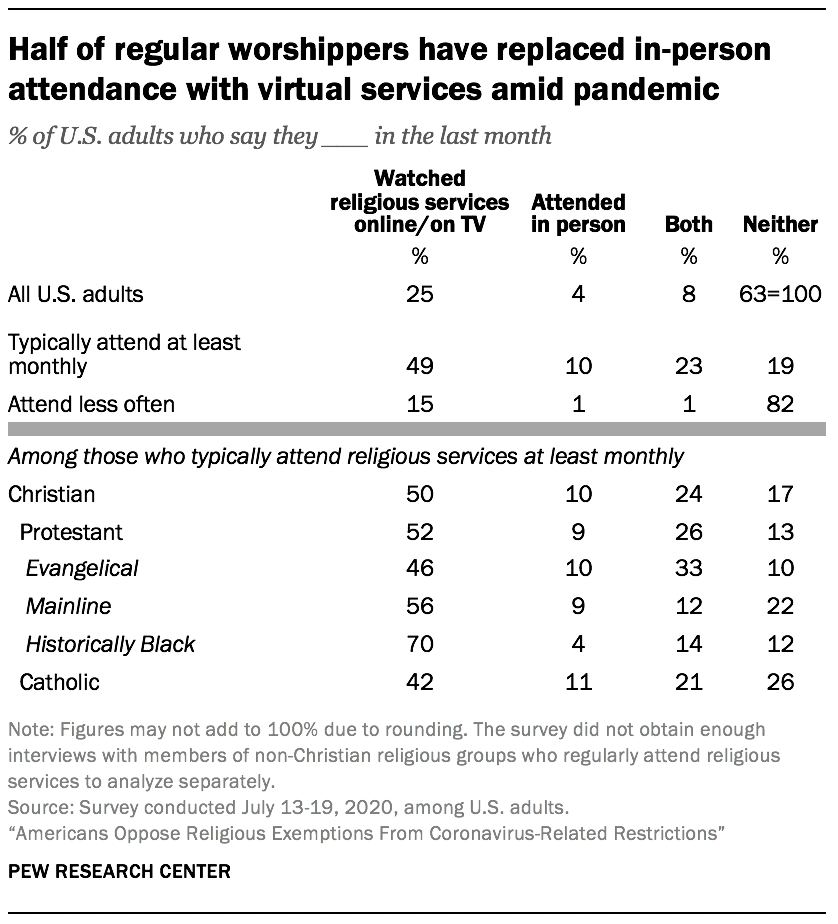 These two questions (about in-person religious attendance and viewership of virtual services) can be combined to provide a rough sense of how many Americans have replaced in-person religious attendance with virtual attendance, at least temporarily. Overall, about half of U.S. adults who typically attended religious services at least once a month in 2019 (49%) appear to have substituted virtual participation for in-person attendance: They have recently watched services online or on television and have not attended in person.

Roughly a quarter of regular worship attenders (23%) appear to be supplementing in-person attendance with virtual participation: They have both attended religious services and watched them online or on TV in the last month. Just one-in-ten regular worship attenders say they are still attending services in person and have not recently watched services virtually, while one-in-five (19%) have neither attended in person nor watched religious services online in recent weeks.

Evangelical Protestant churchgoers are more likely than other Christians to say they have both attended church services and watched them online or on TV in the past month. Churchgoers in the historically Black Protestant tradition, meanwhile, are more likely than others to say they have recently watched religious services online or on TV instead of attending in person. Roughly one-quarter of churchgoing Catholics (26%) and mainline Protestants (22%) say they have neither attended nor watched church services in recent weeks.

Many Americans experiencing virtual services for the first time, experimenting with different congregations 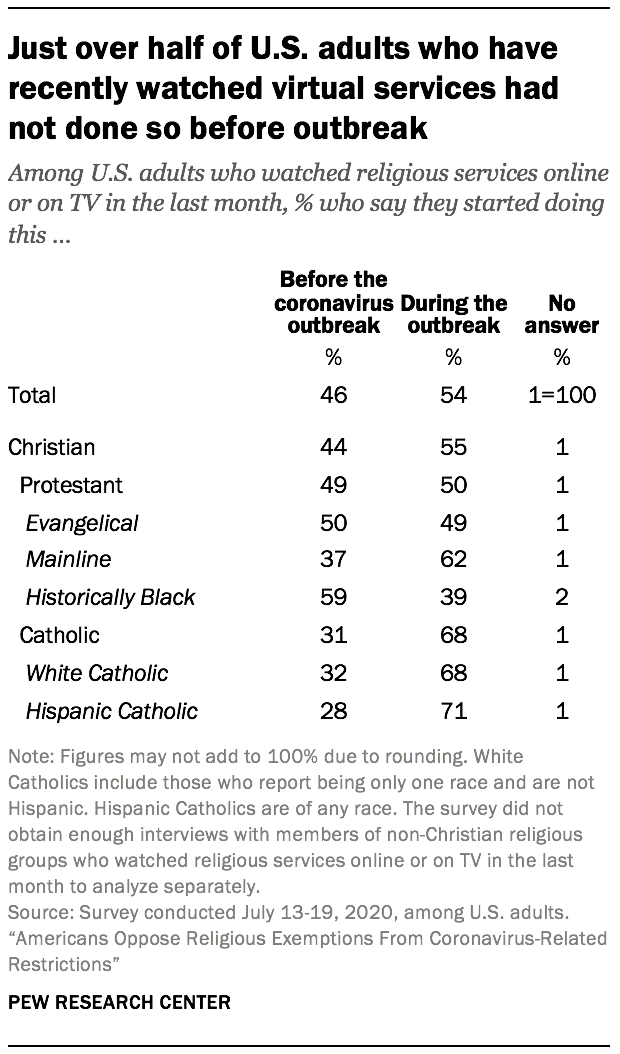 Slightly more than half of U.S. adults who have watched religious services online or on TV in the last month say that this is something they started doing during the coronavirus outbreak (54%), while 46% say they watched virtual services even before the onset of the pandemic.

Among those who have recently watched religious services online or on TV, majorities of Catholics (68%) and mainline Protestants (62%) say watching virtual church services has been a new experience for them as a result of the outbreak, while most people in the historically Black Protestant tradition (59%) and half of evangelical Protestants say they had done this before.

With a wide variety of virtual services available to anyone with an internet connection, many Americans appear to be taking advantage of them and are trying something new. 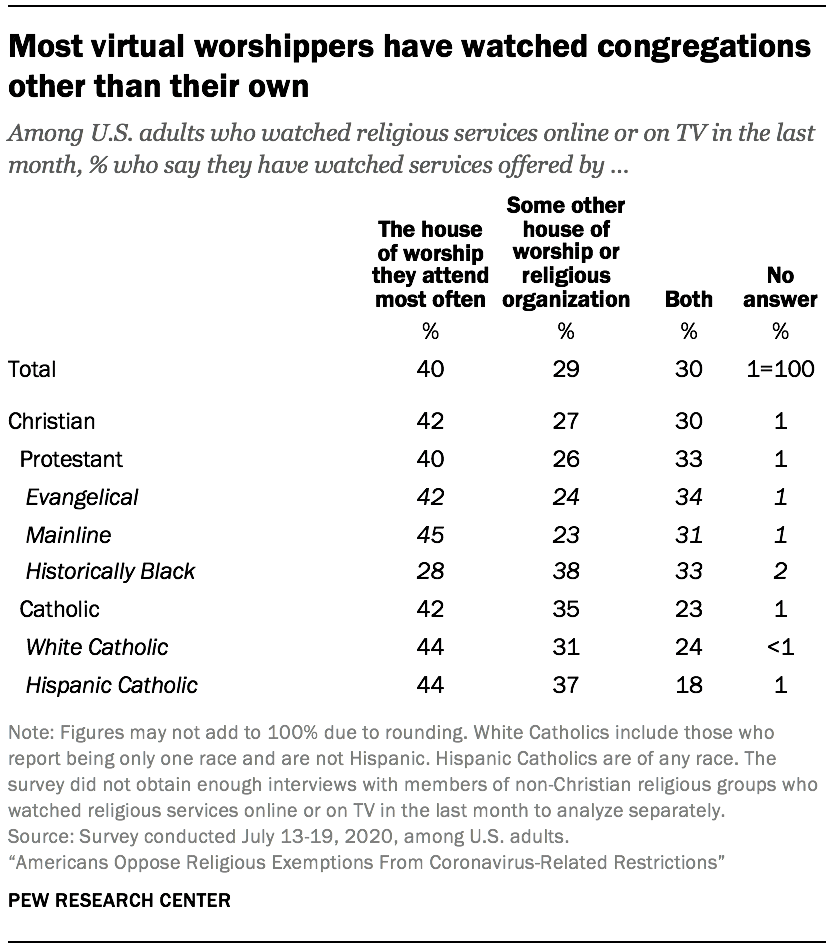 There are few differences across most Christian groups on this question, although members of the historically Black Protestant tradition are less likely than others to exclusively watch their own congregation. 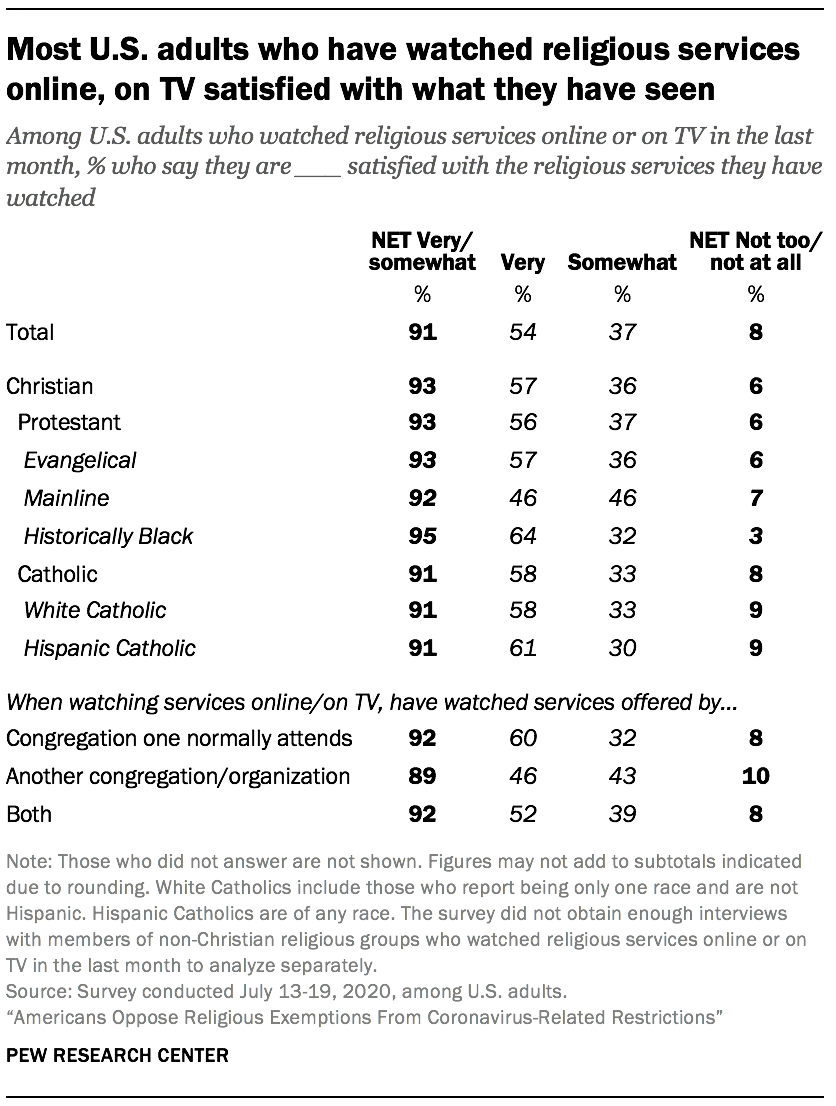 Most say donations to houses of worship have not changed, although more have decreased than increased 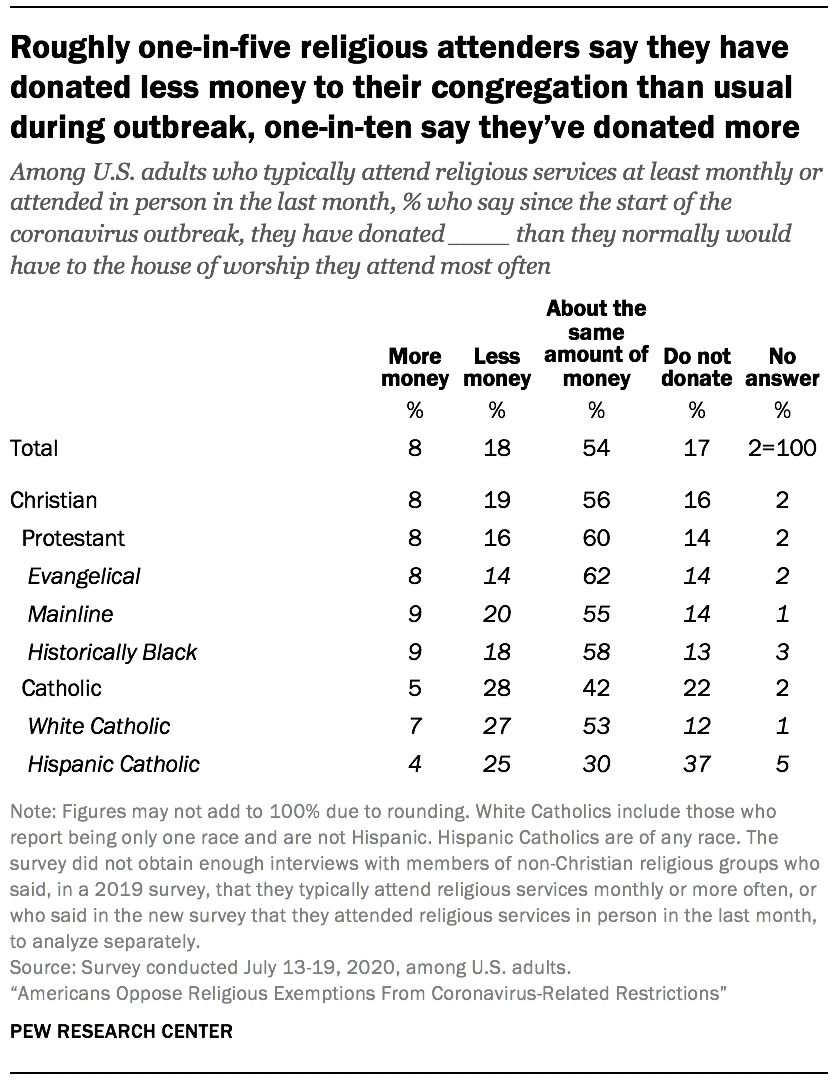 As many people have become physically distanced from their religious congregation, how is this affecting houses of worship financially?

About seven-in-ten U.S. religious attenders indicate that the donations they make to their congregation have not changed much since the start of the coronavirus outbreak, including 54% who say they have donated about the same amount of money as they normally would have and 17% who say that they do not make financial donations to their congregation. 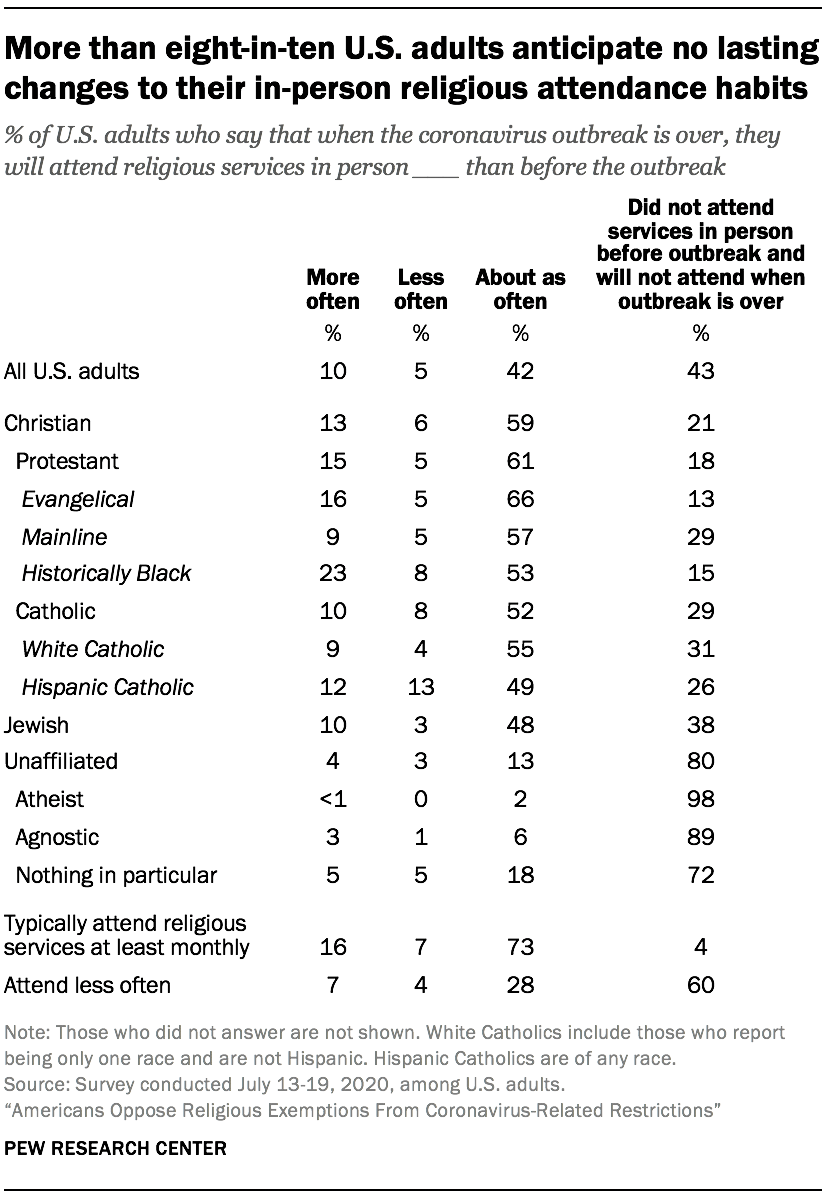 While some have wondered whether the pandemic will permanently change the way people practice religion, most U.S. adults say that once the coronavirus outbreak is over, their religious attendance habits will revert to what they were before. This includes 42% who say they will attend in-person religious services about as often as they did before the outbreak, and an additional 43% who say they did not attend religious services before the outbreak and will not do so once it is over.

Among those who expect their religious attendance habits to change, a greater number say they anticipate going in person more often than they did before (10% of all U.S. adults), rather than less often (5%).

Both respondents who reported attending religious services regularly before the pandemic (as part of a 2019 survey) and respondents who were not regular attenders mostly project a return or continuation of their normal habits following the crisis. But people who say they attended religious services at least monthly before the pandemic are more likely than those who attended less often to say they anticipate increasing their attendance once the crisis has passed (16% vs. 7%). 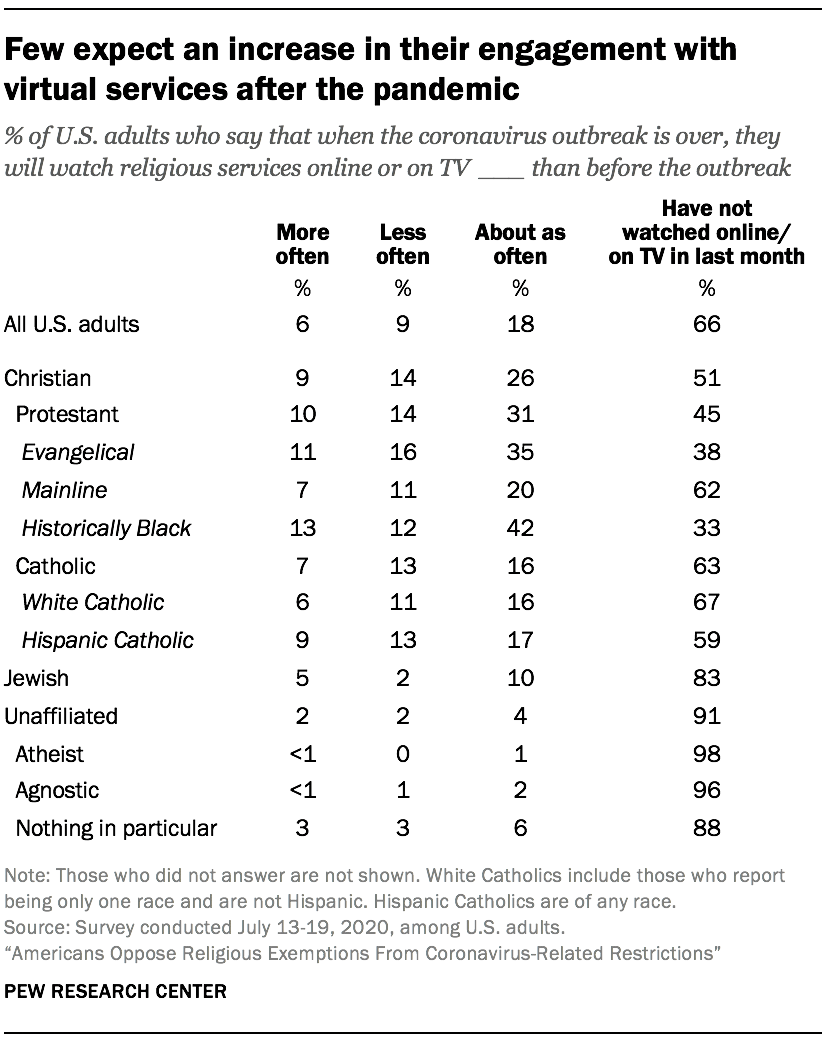 Just as most people foresee returning to pre-pandemic rates of in-person attendance once the coronavirus outbreak is over, the survey finds little evidence to predict a large-scale increase in engagement with virtual services. 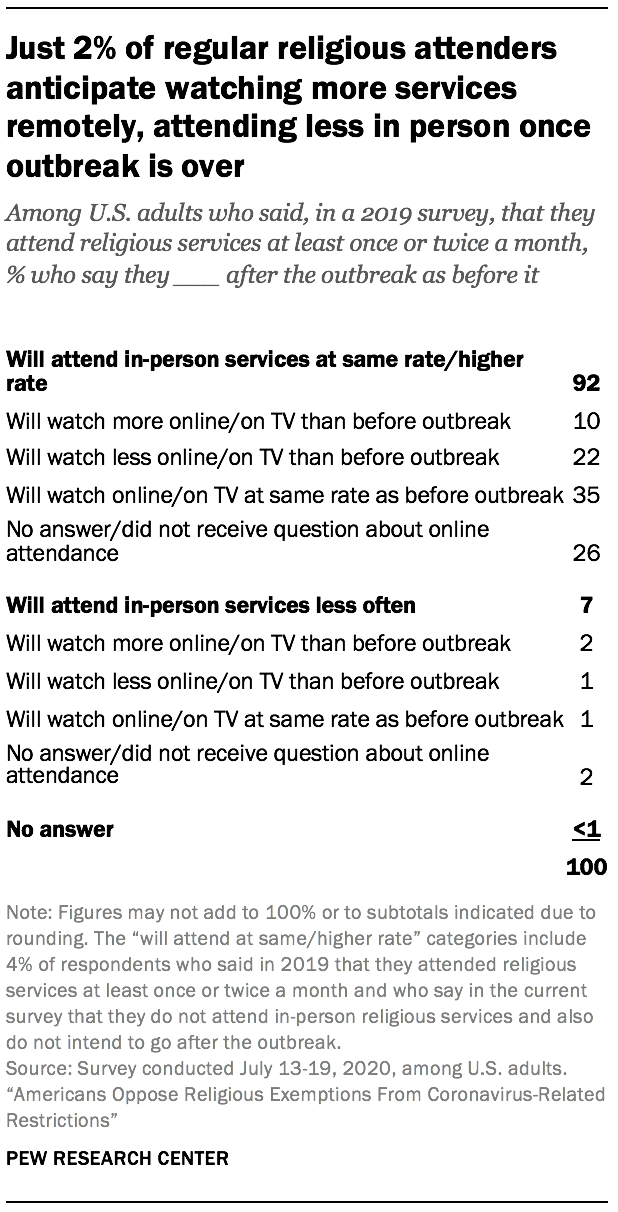 Combining these two questions – about whether respondents anticipate changes to their in-person or virtual religious behavior after the pandemic, compared with before – can shed light on a discussion observers of American religion have raised about the long-term impact of the pandemic on U.S. religious life.

Will the pandemic leave regular religious attenders wary of large gatherings and less likely to attend in-person religious services? Will people appreciate the convenience and safety of “virtual” attendance and seek to continue practicing that way? Or will Americans miss the social connections associated with a religious congregation? Furthermore, could the crisis brought on by the pandemic lead to a revival of religious interest and observance among those who did not regularly attend religious services before the pandemic? Or will the forced separation from religious communities hasten the rise of the religious “nones” in America? 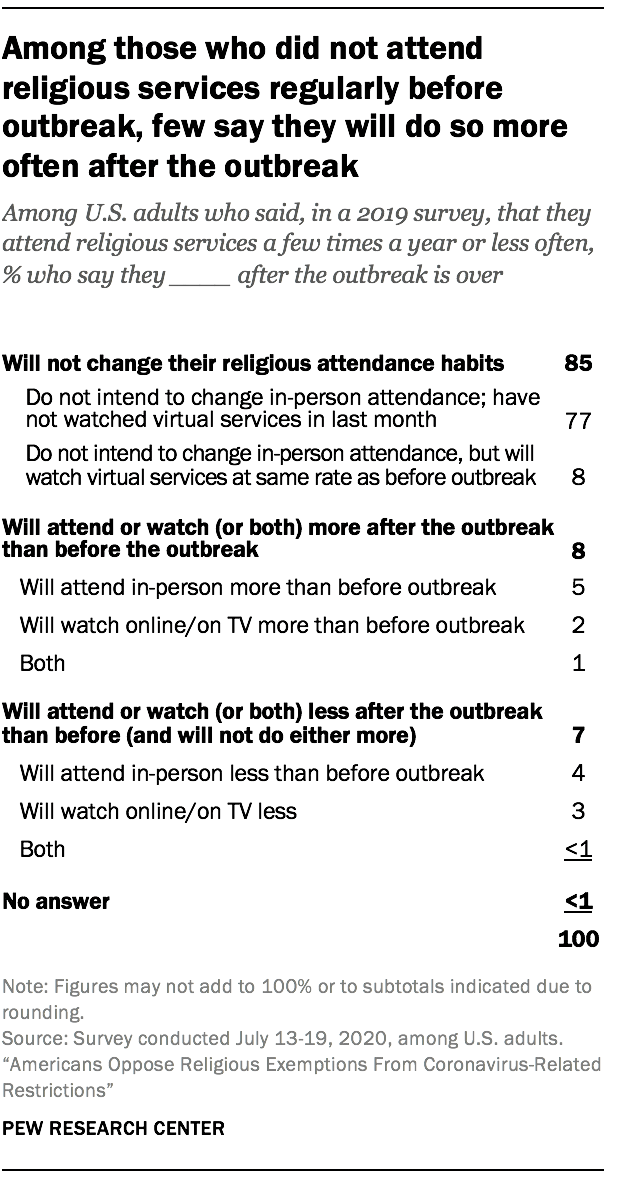 What people think about modifications to in-person religious attendance, and what their house of worship is doing 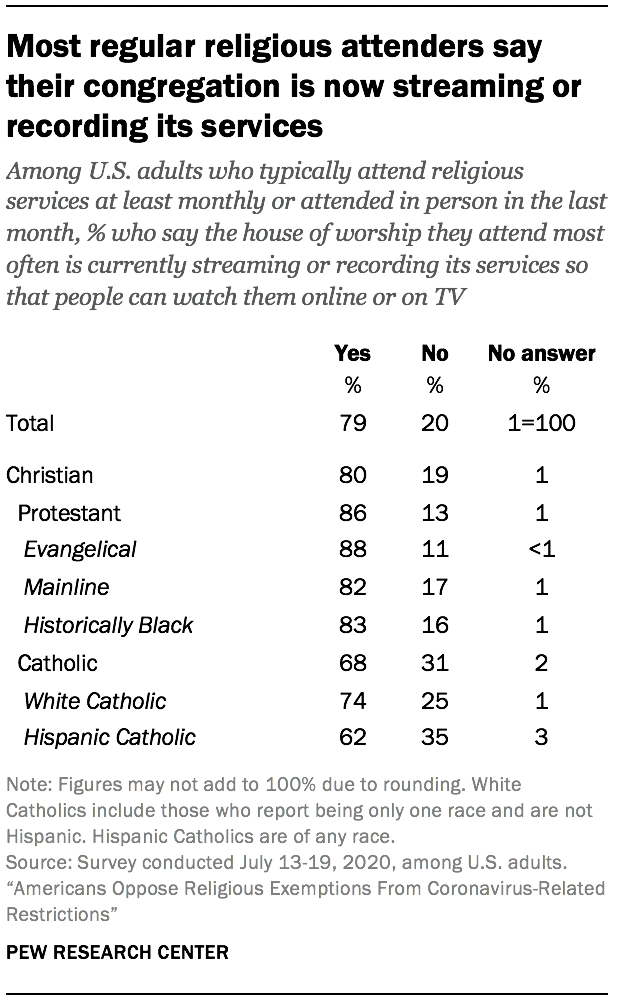 Among those who said in a 2019 survey that they attend religious services at least monthly or who say in the current survey that they attended in the last month, eight-in-ten say their congregation is now streaming or recording its services so that they can be viewed online or on TV. Protestants are more likely than Catholics to say this about their congregation. Still, two-thirds of Catholics say their parish now provides this kind of electronic outreach.

Another 36% of attenders say there are restrictions on the number of people who can gather at any one time in their congregation, and 35% say those attending religious services are required to wear masks (in both cases, upward of six-in-ten attenders whose congregations are open but modified say this). Fewer say their congregation has limited or prohibited communal singing (20% of all religious attenders, 37% of all those at open-but-modified congregations).

Mainline Protestants and those in the historically Black Protestant tradition are more likely than those in other Christian groups to say their congregation is currently closed. Evangelical Protestants and Catholics, by contrast, are more likely than other Christians to say that their churches are open in a modified way. Few people in any Christian tradition say their congregations are operating normally.

Four-in-ten religious attenders who reside in the West and 33% of those who live in the South say their congregation is now closed, which is higher than the shares who say this in the Midwest and Northeast (24% each). And those who live in parts of the country where the virus has hit hardest (in terms of death toll) are more likely than those who live in the least severely affected areas to say their places of worship are closed entirely. But across the country, from the Northeast to the West and from the hardest-hit areas to the least affected, fewer than one-in-ten attenders say their congregations are open and functioning normally. 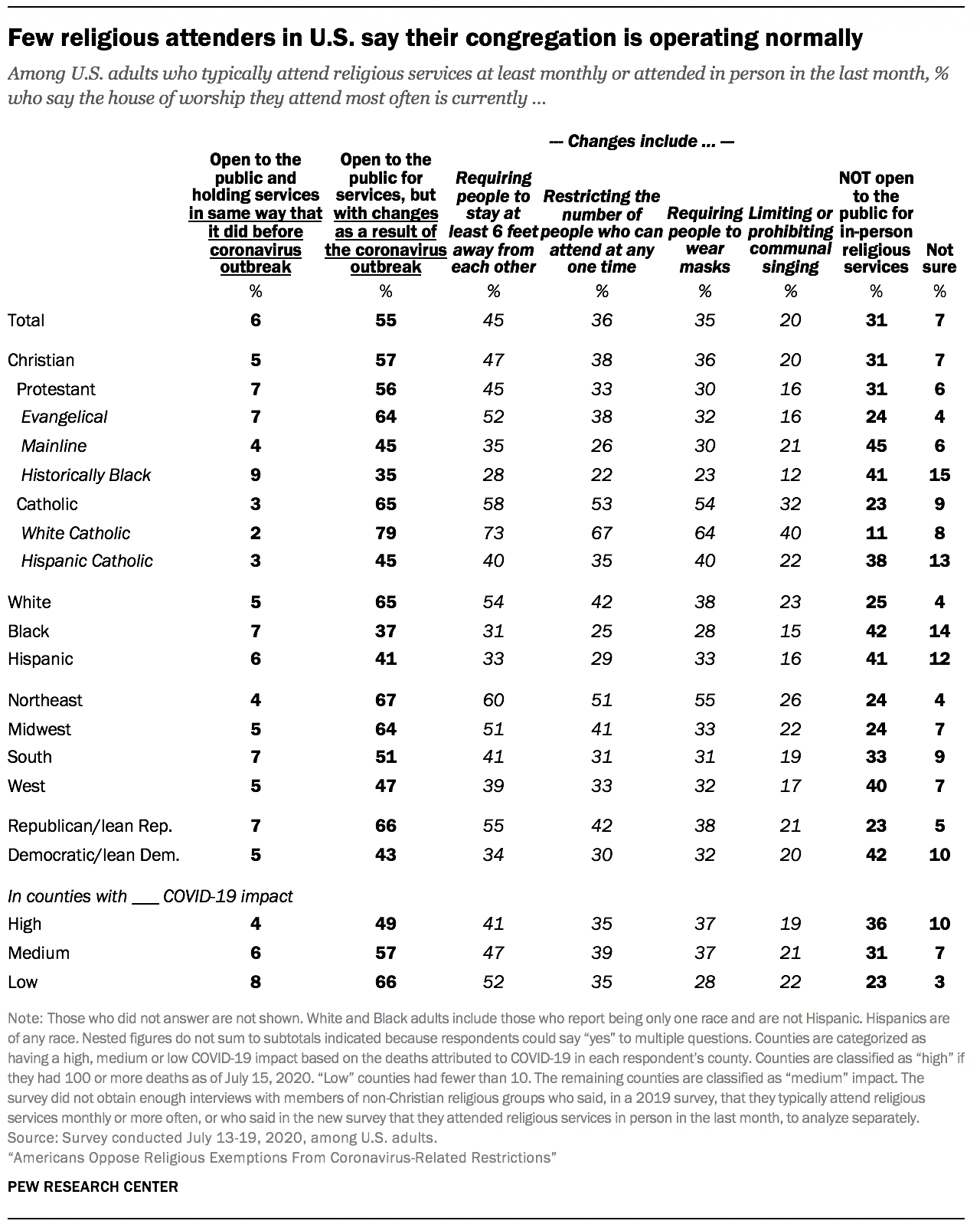 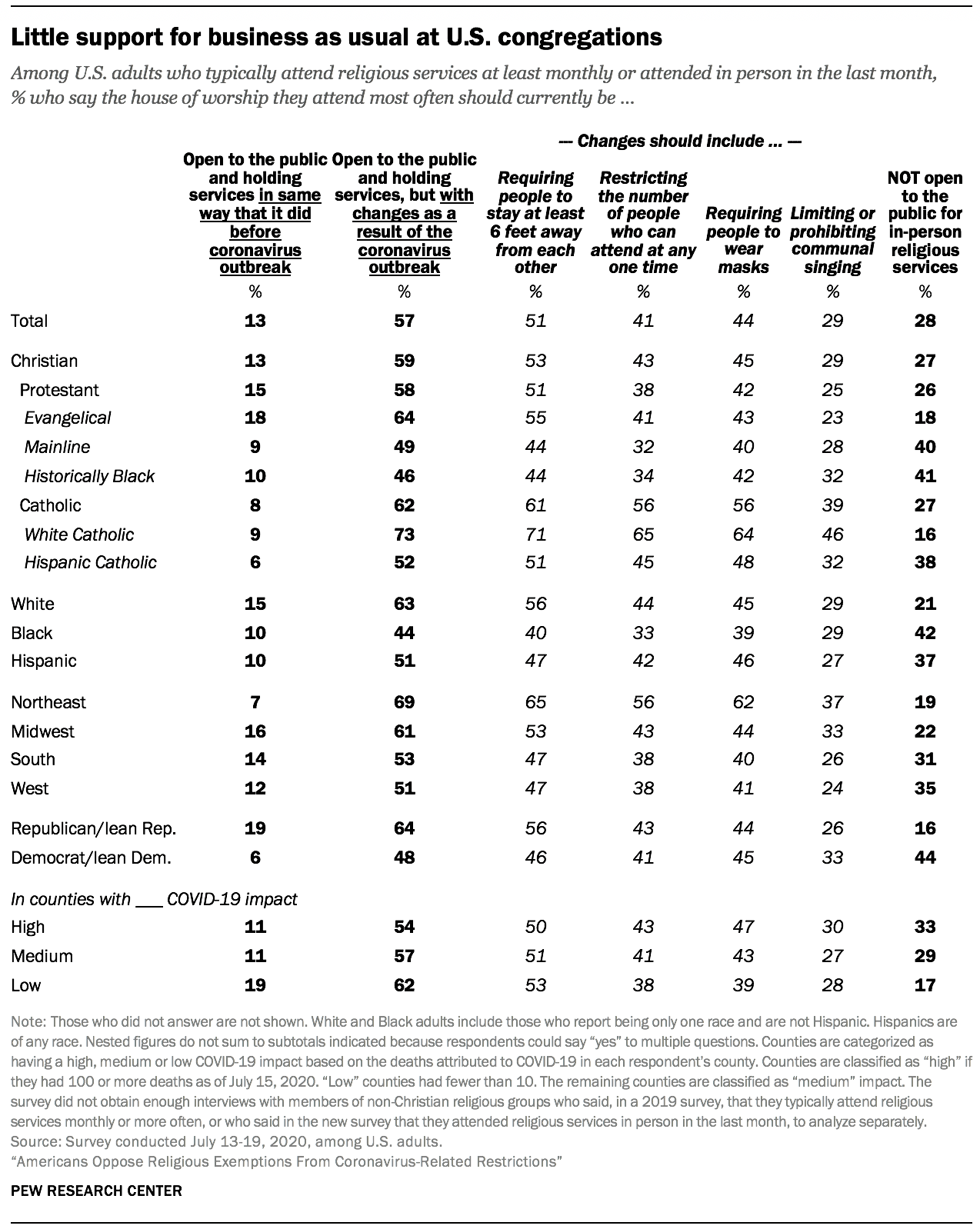 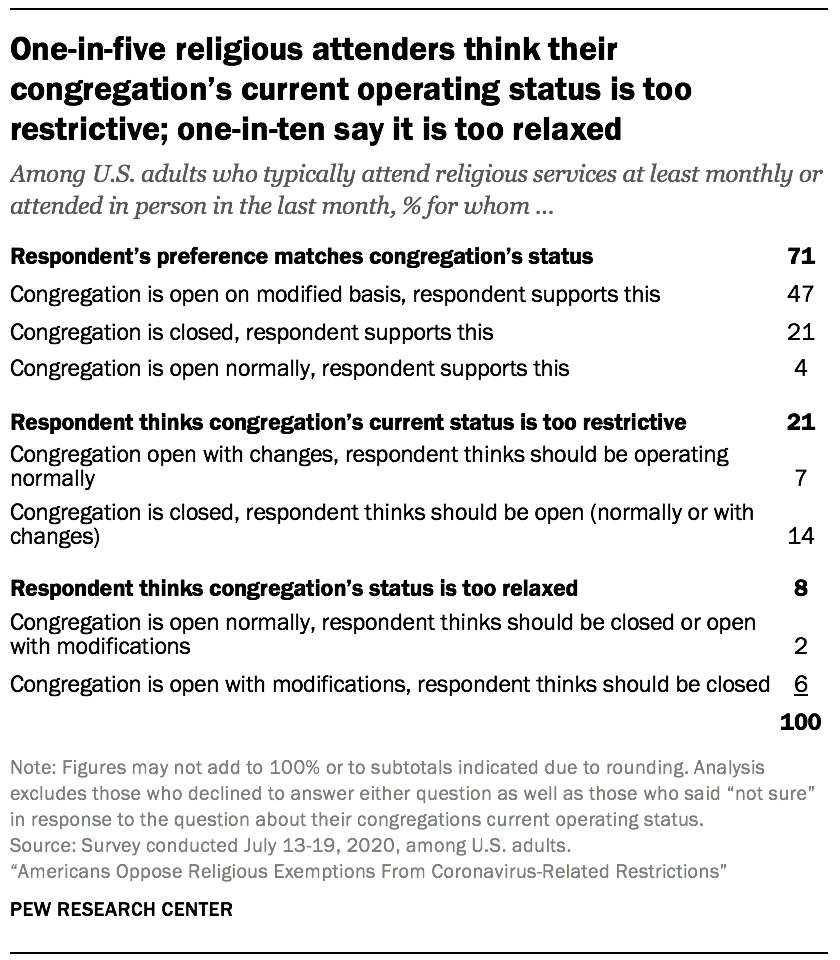 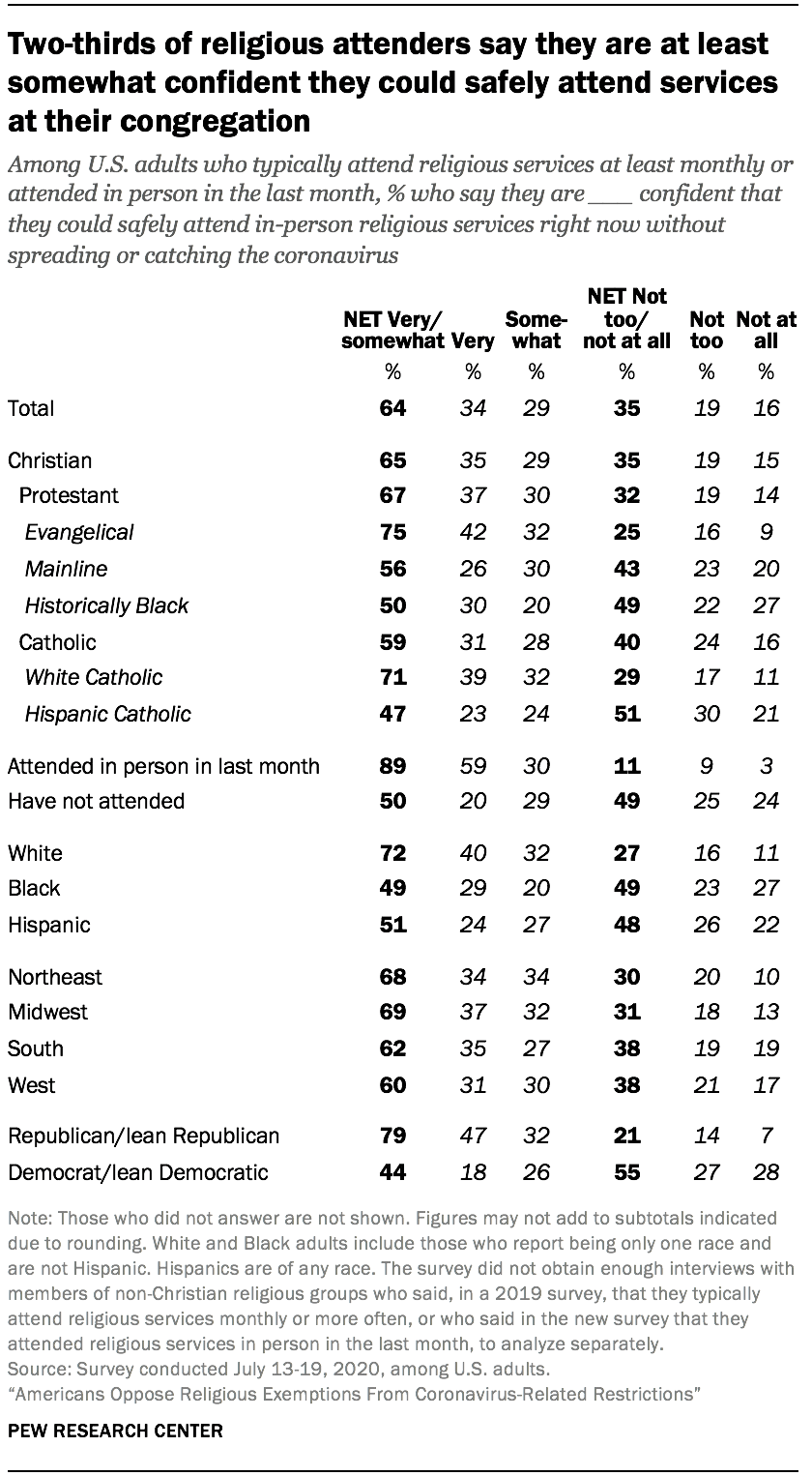 Overall, two-thirds of regular religious attenders are “very” or “somewhat” confident they could attend services safely without contracting or spreading the coronavirus. Levels of confidence are highest among evangelical Protestants (75%) and white Catholics (71%), and are lower among other Christian groups.

There also are broad racial and ethnic differences: White Americans have been less affected and are less worried about the effects of the pandemic than are Black and Hispanic Americans. 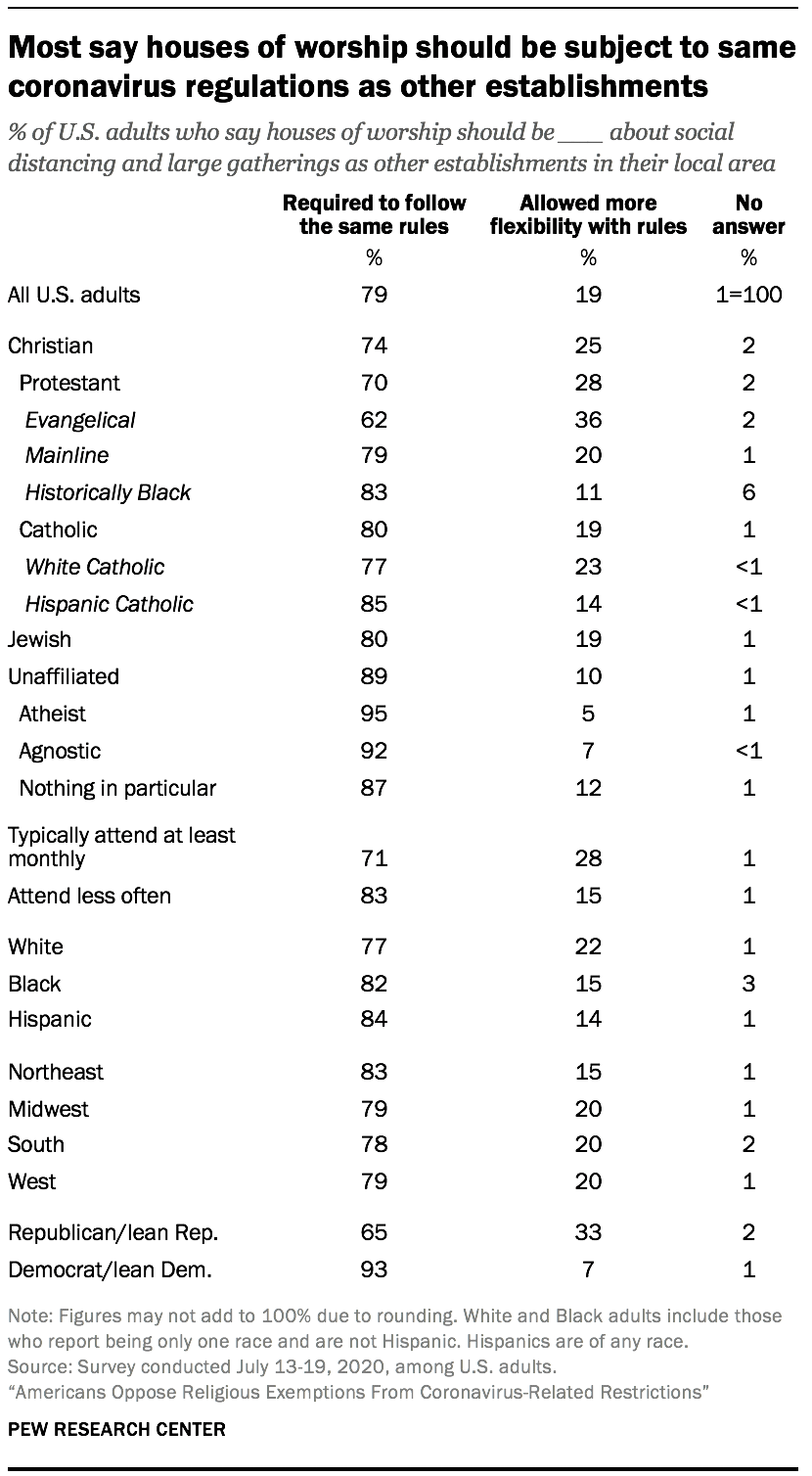 Majorities in all religious, demographic and political groups analyzed in the survey say houses of worship should be required to abide by the same social distancing guidelines and restrictions on large gatherings as other establishments in their local area.

Support for this view is higher among self-described atheists and agnostics and among people who typically attend religious services a few times a year or less than it is among religiously affiliated Americans and those who attend  regularly. Still, majorities in all religious groups oppose religious exceptions to regulations designed to slow the spread of the outbreak.

Correction (Aug. 10, 2020): In the chart “Among regular worshippers, one-third say they have attended religious services in person in last month, nearly three-quarters have watched virtually,” the number for white Catholics who have attended religious services in person has been corrected, as has the text about that finding. The change was very small – 1 percentage point – and does not affect the report’s substantive findings.

Next: 2. U.S. adults regularly turn to a variety of activities to help cope with coronavirus outbreak Next Page → ← Prev Page