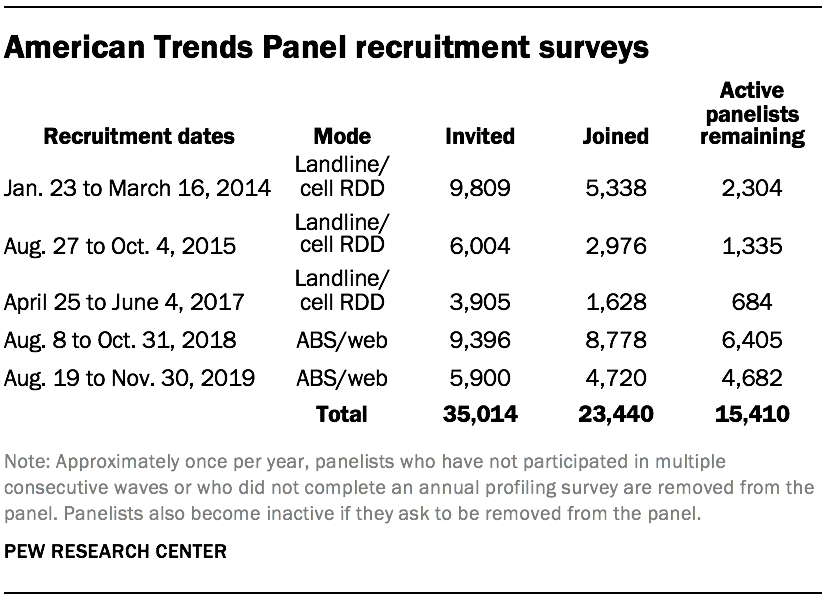 Data in this report is drawn from the panel wave conducted July 13 to July 19, 2020. A total of 10,211 panelists responded out of 12,981 who were sampled, for a response rate of 79%. There were no panelists who were removed from the data due to extremely high rates of refusal or straightlining. The cumulative response rate accounting for nonresponse to the recruitment surveys and attrition is 4.3%. The break-off rate among panelists who logged on to the survey and completed at least one item is 1%. The margin of sampling error for the full sample of 10,211 respondents is plus or minus 1.5 percentage points.

This study featured a stratified random sample from the ATP. The sample was allocated according to the following strata, in order: tablet households, Mexican-born Hispanics, U.S. born Hispanics, other foreign-born Hispanics, Cuban-born Hispanics, non-internet, high school education or less, not registered to vote, nonvolunteers, people ages 18 to 34, non-Hispanic Black adults, and all other categories not already falling into any of the above.

The U.S. Postal Service’s Delivery Sequence File has been estimated to cover as much as 98% of the population, although some studies suggest that the coverage could be in the low 90% range.3 The American Trends Panel never uses breakout routers or chains that direct respondents to additional surveys.

The ATP data was weighted in a multistep process that begins by calibrating the entire panel so that it aligns with the population benchmarks identified in the accompanying table to create a full-panel weight. For ATP waves in which only a subsample of panelists are invited to participate, a wave-specific base weight is created by adjusting the full-panel weights for subsampled panelists to account for any differential probabilities of selection for the particular panel wave. For waves in which all active panelists are invited to participate, the wave-specific base weight is identical to the full-panel weight. The next step in the weighting uses an iterative technique that aligns the sample to population benchmarks on the dimensions listed in the accompanying table.

Sampling errors and tests of statistical significance take into account the effect of weighting. Interviews are conducted in both English and Spanish. 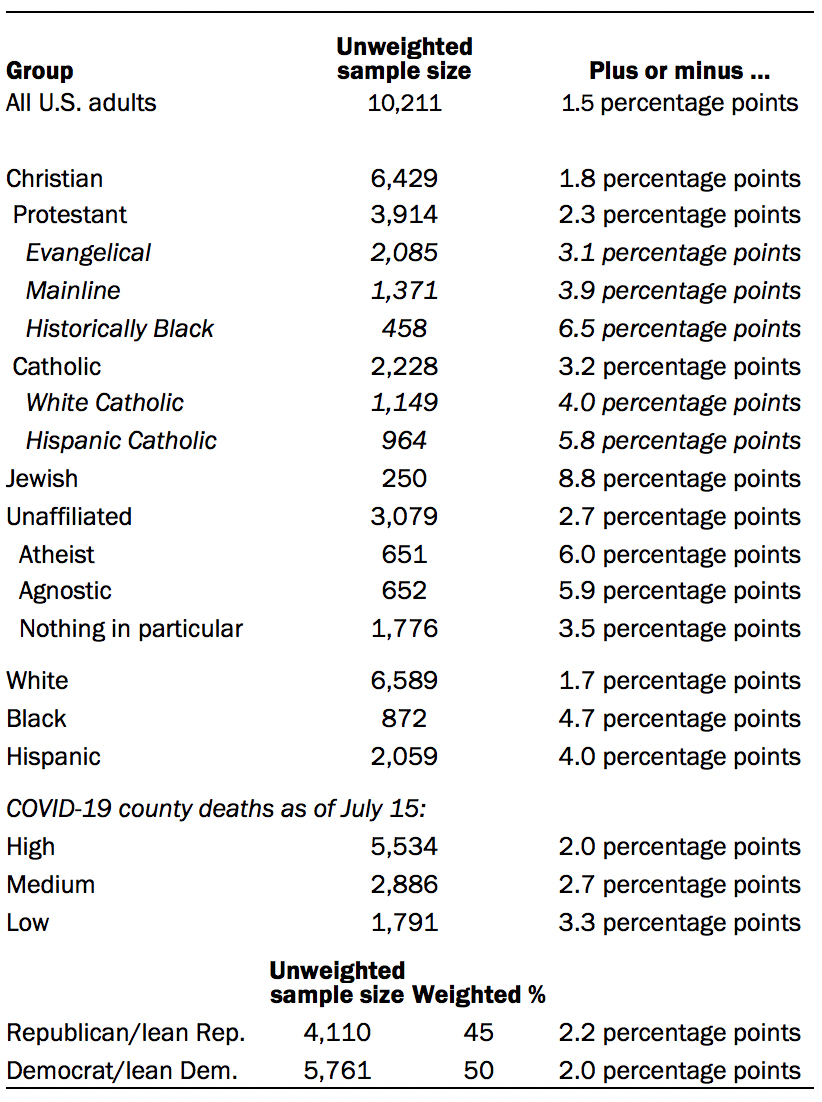 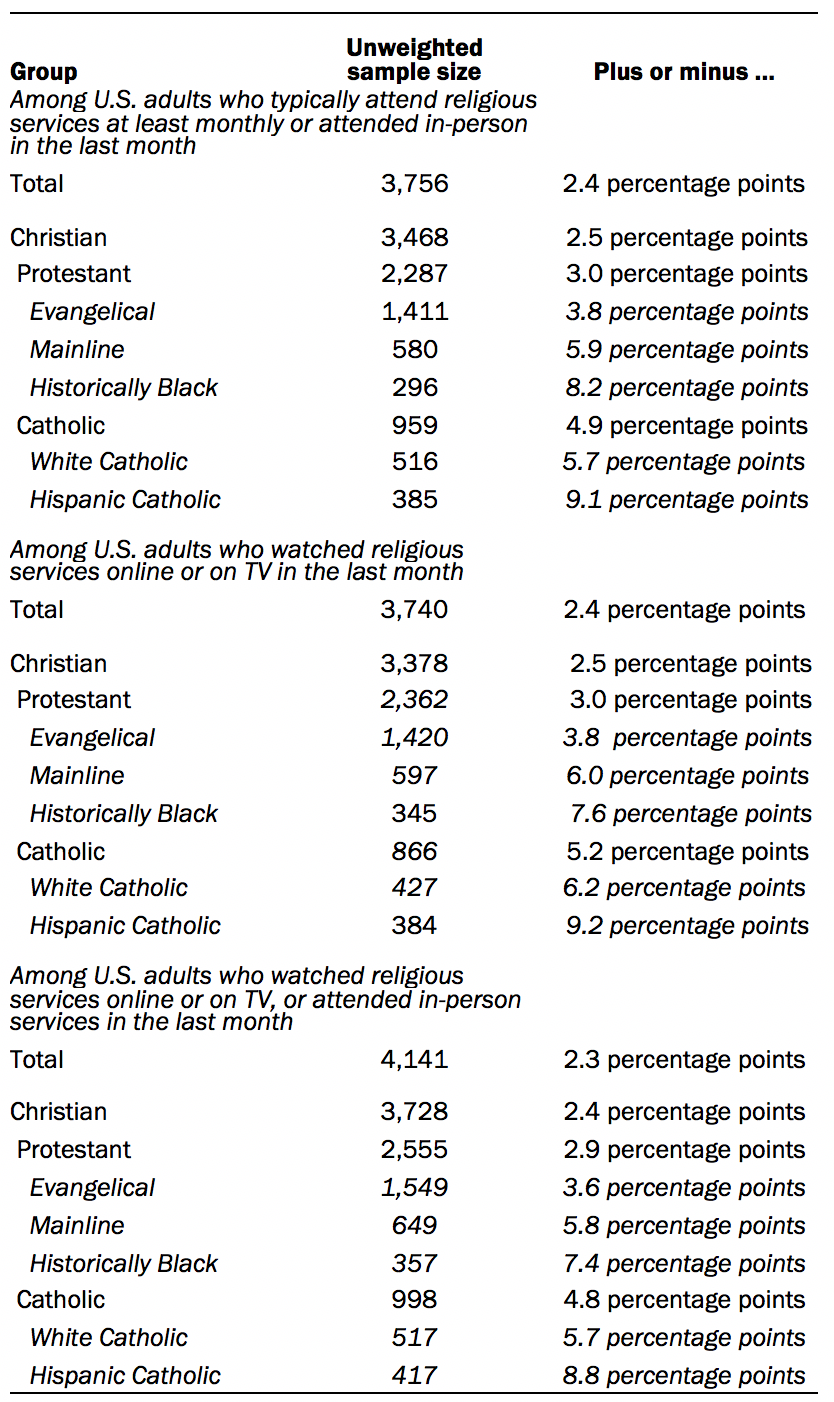 CORRECTION (September 2020): A previous version of this methodology statement contained an incorrect description of the base weighting for this survey. None of the study findings or conclusions are affected.